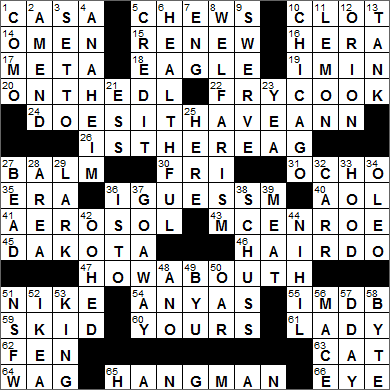 CROSSWORD SETTER: Joel Fagliano
THEME: There is a note accompanying each of this week’s crosswords:

In today’s puzzle, we play a game of HANGMAN. Out themed answers are the questions we ask in the game, guessing letters, to reveal the answer HANGMAN at the bottom of the grid:

Today’s Wiki-est, Amazonian Googlies
Across
10. Target of a blood thinner : CLOT
“Blood thinner” is a familiar term for anticoagulant. They are drugs designed to prevent blood clots from forming. They do not break up existing blood clots. That’s something the body does for itself.

16. Goddess involved in Hercules’ labors : HERA
I’m not sure how much Hera and Hercules interacted in Greek mythology, but they turn up as foes in several films and movies, especially in the TV series “Hercules: The Legendary Journeys”.

17. Like a movie about people making a movie : META
In recent decades the prefix “meta-” has started to be used as a standalone adjective. In this sense “meta” means “self-referential”, describing something that refers to itself. For example, “This sentence starts with the word ‘this’ and ends with the word ‘this’” might be called a meta sentence. A movie that is about the making of a movie could also be described as meta. For example, “The Blair Witch Project” might be described as meta, which is a movie about some young people making a scary movie about the Blair Witch.

18. The Muppet Sam, e.g. : EAGLE
The most overtly patriotic Muppet by far is Sam Eagle.

41. Option for a graffiti artist : AEROSOL
“Graffiti” is the plural of “graffito”, the Italian for “a scribbling”. The word was first used to describe ancient inscriptions on the walls in the ruins of Pompeii.

43. Sporting great with the book “You Cannot Be Serious!” : MCENROE
Former tennis pro John McEnroe is known for his prowess on the court, as well his fiery temper. He was one of the great characters of his day, and had many grudge matches against the likes of Bjorn Borg, Jimmy Connors and Ivan Lendl. In 1984, McEnroe won 82 out of 85 matches, a winning record that still stands to this day.

45. Word seen twice on a U.S. map : DAKOTA
The Dakota Territory was formed in 1861 and ceased to exist with the admission to the Union of the states of North Dakota and South Dakota. The territory was split into two states in 1889 largely due to lobbying by the Republican Party, which enjoyed a lot of support in the Dakota Territory. The admission of two states added to the political power of the party in the US Senate, by adding four safe Republican seats.

51. Company endorsed by LeBron James : NIKE
Nike was the Greek goddess of victory, often referred to as the Winged Goddess of Victory. The athletic shoe company Nike uses the “Nike swoosh” as its logo, which is based on the goddess’s wing.

Basketball player LeBron James seems to be in demand for the covers of magazines. James became the first African American man to adorn the front cover of “Vogue” in March 2008. That made him only the third male to make the “Vogue” cover, following Richard Gere and George Clooney.

55. Website for film buffs : IMDB
The website called the Internet Movie Database (IMDb) was launched in 1990, and is now owned by Amazon.com. It’s a great site for answering question one has about movies and actors.

65. – : HANGMAN
The word guessing game called Hangman seems to have been played first in Victorian England. At one time it was known as “Birds, Beasts and Fishes” as the words to be guessed had to be types of animal.

4. Disneyland’s locale : ANAHEIM
Walt Disney came up with the idea of building Disneyland after visiting other theme parks with his daughters in the thirties and forties. He started building the park at Anaheim, California in 1954, and the facility opened just one year and one day later. The total cost of construction was $17 million. Opening day did not go smoothly, largely because over 28,000 people visited the park compared to the 11,000 people expected at the invitation-only event. The opening day went so badly that for years Disney executives referred to it as “Black Sunday”.

7. An official U.N. language: Abbr. : ENG
Today there are six official languages of the United Nations:

8. Policy of widespread government social programs : WELFARISM
A welfare state is one in which the government takes a lead role in protecting and promoting the economic and social well-being of its citizens.

10. Best Picture of 2002 : CHICAGO
The wonderful 1975 musical “Chicago” is based on a 1926 play of the same name written by a news reporter called Maurine Dallas Watkins. Watkins had been assigned to cover the murder trials of Beulah Annan and Belva Gaertner for the “Chicago Tribune”, and used the story that unfolded as the basis for her play. Annan became the character Roxie Hart, and Gaertner became Velma Kelly. I’ve only ever seen the movie version of “Chicago” and never a live performance …

11. It makes a whiskey sour sour : LEMON
A whiskey sour is made from whiskey, lemon juice and sugar, usually garnished with an orange slice and a maraschino cherry.

12. Hunter at night : ORION
The very recognizable constellation of Orion is named after the Greek God Orion, the Hunter. If you take a look at the star in Orion’s “right shoulder”, the second brightest star in the constellation, you might notice that it is quite red in color. This is the famous star called Betelgeuse, a red supergiant, a huge star that is on its way out. Betelgeuse is expected to explode into a supernova within the next thousand years or so. You don’t want to miss that …

21. Important Scrabble tile : ESS
The game of Scrabble has been around since 1938, the invention of an architect named Alfred Mosher Butts. Butts determined how many tiles of each letter, and the point value of each tile, by analyzing letter distributions in publications like “The New York Times”.

32. Novelist Caleb : CARR
One of Caleb Carr’s novels is a latter-day Sherlock Holmes mystery called “The Italian Secretary”. The novel was written as a homage to Sir Arthur Conan Doyle (using the Holmes character with the permission of the Doyle estate). I am a big fan of Sherlock Holmes stories so I must put this one on my reading list.

33. Place with homies : HOOD
“Homie” is short for “homeboy”, someone from one’s home neighborhood (hood).

38. Go downhill fast : SCHUSS
A schuss is a very fast run downhill in skiing, not taking any turns to slow the pace of the descent. “Schuss” is a German word for “shot”.

49. Mitt Romney’s alma mater, for short : BYU
Brigham Young University (BYU) in Provo, Utah has about 34.000 students on campus making it the largest religious university in the country. The school was founded in 1875 by Brigham Young, then President of the Mormon Church.

The literal translation for the Latin term “alma mater” is “nourishing mother”. “Alma mater” was used in Ancient Rome to refer to mother goddesses, and in Medieval Christianity the term was used to refer to the Virgin Mary. Nowadays, one’s alma mater is the school one attended, either high school or college, usually one’s last place of education.

51. Tag for inappropriate online photos : NSFW
The abbreviation “NSFW” stands for “not safe/suitable for work”. I’ve never heard of the term outside of crosswords, but apparently it’s Internet slang.

52. Furniture giant : IKEA
The furniture chain IKEA was founded by Ingvar Kamprad in 1943, when he was just 17-years-old. IKEA is an acronym that stands for Ingvar Kamprad Elmtaryd Agunnaryd (don’t forget now!). Elmtaryd was the name of the farm where Ingvar Kamprad grew up, and Agunnaryd is his home parish in Sweden.

56. Medieval weapon : MACE
A mace is a relatively simple weapon in essence, a heavy weight on the end of a handle that is used to deliver powerful blows on an opponent’s body.

57. Make-or-break date : D-DAY
The most famous D-Day in history was June 6, 1944, the date of the Normandy landings in WWII. The term “D-Day” is used by the military to designate the day on which a combat operations are to be launched, especially when the actual date has yet to be determined. What D stands for seems to have been lost in the mists of time although the tradition is that D just stands for “Day”. In fact, the French have a similar term, “Jour J” (Day J), with a similar meaning. We also use H-Hour to denote the hour the attack is to commence.