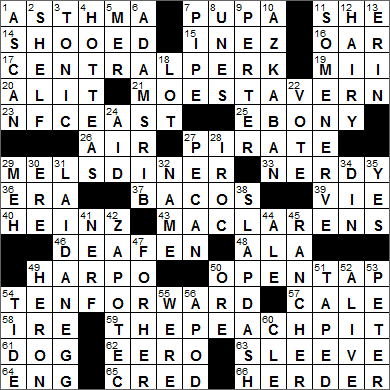 CROSSWORD SETTER: Michael Hawkins
THEME: TV Hangouts … each of today’s themed answers is the name of a “hangout” that features prominently on a TV show:

Today’s Wiki-est, Amazonian Googlies
Across
7. Cocooned stage : PUPA
The pupa is an intermediate stage in the development of an insect. All four stages are: embryo, larva, pupa and imago.

15. Don Juan’s mother : INEZ
Lord Byron wrote the poem “Don Juan” based on the legend of Don Juan the libertine. In the poem, he created the character Donna Inez, Don Juan’s mother. Supposedly Inez was based on Byron’s own wife, Annabella Milbanke.

16. Henley crewman : OAR
The Henley Regatta is a rowing competition that has been held every year since 1839 on the River Thames near the town of Henley-on-Thames.

17. “Friends” coffeehouse : CENTRAL PERK
The six title characters in the sitcom “Friends” met each other in the Central Perk coffeehouse from the very first episode. There is now a Central Perk franchise in the reality, with locations all around the globe. The Central Perk in Dubai was opened by actor James Michael Tyler, who played the coffeehouse manager Gunther on the show.

21. “The Simpsons” watering hole : MOE’S TAVERN
The regulars on “The Simpsons” hang out at Moe’s Tavern, which is named for and run by Moe Szyslak. The most popular beer at Moe’s is Duff Beer. The name “Duff” is a reference to the real-life Duffy’s Tavern that used to be East 13th Street in Eugene, Oregon. “The Simpsons” creator Matt Groening used to frequent Duffy’s regularly, and Moe’s looks very much like Duffy’s in terms of decor and floorplan.

25. Magazine with Barack and Michelle Obama on a 2007 cover with the caption “America’s Next First Couple?” : EBONY
“Ebony” is a magazine aimed at African Americans that was founded in 1945.

29. “Alice” eatery : MEL’S DINER
The sitcom “Alice” is set in Mel’s Diner, which is supposedly frequented by locals and truckers on the outskirts of Phoenix. There is a real Mel’s Diner in Phoenix, and the restaurant’s sign is used in the opening credits. The real-world Mel’s was called “Chris’ Diner”, but the owner agreed to a temporary change in name for the purposes of the show. But, “Chris” never came back, and “Mel’s” is still serving customers today.

36. Competitor of All : ERA
Era was the first liquid laundry detergent produced by Procter & Gamble.

40. “57 Varieties” brand : HEINZ
The HJ Heinz Company is an American concern, based in Pittsburgh, Pennsylvania. The company was founded in 1869, by Henry John Heinz. It was Heinz himself who came up with the marketing slogan of “57 Varieties”. The “57” really doesn’t have any relevance to the range of products available as Heinz chose the “5” because it was his lucky number, and the “7” because it was his wife’s lucky number.

43. “How I Met Your Mother” pub : MACLAREN’S
A lot of the action in the sitcom “How I Met Your Mother” is set in MacLaren’s pub. The pub’s owner is Carl MacLaren, played by Joe Nieves. Nieves had been meant to play a cop in the pilot episode, but the role was cut. Somehow, Nieves wasn’t told that his services were no longer needed and so he turned up on set in a police uniform. Rather than completely disappoint him, the producers decided to give Nieves the role of Carl MacLaren.

49. Comic’s nickname derived from the instrument he played : HARPO
Harpo Marx was the second oldest of the Marx brothers. Harpo’s real name was Adolph, and he earned his nickname because he played the harp. Famously he didn’t speak on screen, a routine he developed after reading a review that he performed really well when he just didn’t speak!

54. “Star Trek: T.N.G.” lounge : TEN FORWARD
The spectacular lounge called Ten Forward is located at the extreme forward section of the starship Enterprise, and has several large windows that provide an impressive view of space ahead of the vessel. The bar’s name come from its location, on deck ten in the forward part of the ship.

62. The younger Saarinen : EERO
Eero Saarinen was a Finnish American architect, renowned in this country for his unique designs for public buildings such as Gateway Arch in St. Louis, Dulles International Airport Terminal, and the TWA building at JFK. The list of his lesser-known, but still impressive, works includes several buildings erected on academic campuses. For example, the Chapel and Kresge Auditorium on the MIT campus, the Emma Hartman Noyes House at Vassar College, the Law School building at the University of Chicago, and Yale’s David S. Ingalls Rink.

64. E.S.L. part: Abbr. : ENG
English as a Second Language (ESL) is sometimes referred to as English for Speakers of Other Languages (ESOL) and English as a Foreign Language (EFL).

65. Reputation on the street : CRED
“Street cred” is slang for “street credibility”, of which I have none …

66. Border collie, when working : HERDER
The collie isn’t actually a breed of dog, but rather the name given to a group of herding dogs that originate in Scotland and Northern England. An obvious (and wonderful) example would be the Border Collie. Many dogs classed as collies don’t have the word “collie” in the name of the breed, for example the Old English Sheepdog and the Shetland Sheepdog.

Down
3. Soft drink, in the Northeast : TONIC
The phrase “soft drink” is used a lot by producers and restaurants, but consumers tend to use some local term for the same product. The term “soda” is perhaps the most common in the US, and is especially common in the northeast of the country. The term “pop” is popular in the Midwest, the Pacific Northwest and Canada. A generic use of “coke” is quite common in the South, and “tonic” is found in eastern Massachusetts. I grew up in Ireland using the term “lemonade”.

6. 1949 Tracy/Hepburn film : ADAM’S RIB
And here it is! My favorite movie of all time. “Adam’s Rib” is a classic romantic comedy starring the powerful duo, Spencer Tracy and Katharine Hepburn, playing two lawyers married to each other. Inevitably, the married couple have to take opposite sides in a high-profile court case, and hilarity ensues. The film is an interesting exploration of the role of men and women in 1949 American society.

7. Sherlock Holmes appurtenance : PIPE
An appurtenance is an accessory, perhaps a piece of equipment for a specific task. It might also be an appendage, a suffix to a word, for example.

11. “What chutzpah!” : SOME NERVE!
Our word “chutzpah” meaning “nerve, gall, impudence” is derived from the Yiddish “khutspe”, which has the same meaning.

12. Like Sasquatch or a tarantula : HAIRY
The sasquatch or bigfoot is our North American equivalent of the yeti, the ape-like creature said to inhabit the Himalayas. Bigfoot is supposedly hiding out mainly in the Pacific Northwest of North America.

Tarantulas are spider-like arachnids that are usually quite hairy. The original tarantula was a type of wolf spider found in Europe, found near the southern Italian town called Taranto.

27. Sundae nut : PECAN
There’s a lot of speculation about how the dessert called a sundae got its name, but there seems to be agreement that it is an alteration of the word “Sunday”.

28. Classic Camaro : IROC
The IROC-Z is a model of Camaro, introduced in 1978. The IROC-Z takes its name from a famous stock car race, the International Race of Champions.

31. Flopped : LAID AN EGG
Apparently the expression “to lay an egg”, meaning “to perform or play really badly” comes from the resemblance of the number 0 to an egg. One laying an egg scores zero.

41. Soft ball : NERF
Nerf is the name given to the soft material used in a whole series of toys designed for “safe” play indoors. The Nerf product is used to make darts, balls and ammunition for toy guns. “NERF” is an acronym, standing for Non-Expanding Recreational Foam.

42. People of Oaxaca Valley, Mexico : ZAPOTEC
Oaxaca is a state in the southern part of Mexico on the Pacific coast. The state takes the name of Oaxaca, its largest city.

44. Serving at McSorley’s : ALE
A few years ago, I brought my wife and sister-in-law into McSorley’s. I was foolish enough to ask what kind of wine they had for the ladies. the gruff answer was “McSorley’s Light Ale or McSorley’s Dark Ale”.

49. Egret, e.g. : HERON
At one time the egret species of bird was in danger of extinction due to hunting driven by the demand for plumes for women’s hats.

53. ___ Gabriel, original singer for Genesis : PETER
Peter Gabriel is a singer-songwriter from England who used to perform with the rock band Genesis. Gabriel was the band’s original lead singer, and also played the flute.

60. The Browns, on scoreboards : CLE
The Cleveland Browns football team was a charter member of the All-American Football Conference, formed in 1946. Cleveland is the only NFL city that has never hosted nor sent a team to the Super Bowl.