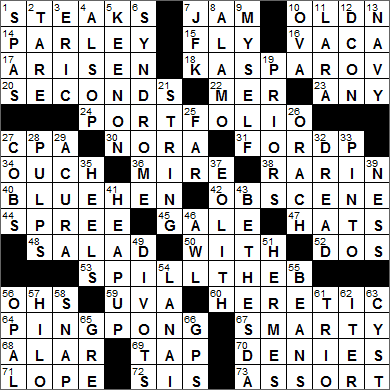 CROSSWORD SETTER: Tracy Gray
THEME: Spill the Beans … we have five long answers that start in the across-direction and SPILL over to the down-direction. And, the end of the answer that SPILLS over is a type of BEAN:

53A. Blab … or a literal hint to completing five answers in this puzzle : SPILL THE /BEANS

Today’s Wiki-est, Amazonian Googlies
Across
7. Some band practice : JAM
The use of “jam”, to mean an improvised passage performed by a whole jazz band, dates back to the late twenties. This gave rise to “jam session”, a term used a few years later. The use of “jam” in this context probably stems from the meaning of “jam” as something sweet, something excellent.

10. Subsidiary of Gap Inc. : OLD /NAVY (giving “navy bean”)
Old Navy is a store brand founded and owned by The Gap. The name Old Navy was taken from the Old Navy Cafe in Paris.

The navy bean is a white bean, and is the bean commonly found in the dish known as “baked beans”. It can also be called a haricot bean. The term “Navy Bean” is used because haricot beans were a staple for sailors in the 19th-century US Navy.

16. Cow, in Colombia : VACA
The South American country of Colombia takes her name from the Italian explorer Christopher Columbus (“Cristoforo Colombo” in Italian).

18. 1996-97 Deep Blue opponent : KASPAROV
Deep Blue was a computer developed by IBM specifically for playing chess. In 1996 it became the first machine to win a chess game against a reigning world champion. The champion in question was the great Garry Kasparov, although he came out on top in the end by winning the 6-game competition 4-2.

22. Saintes-Maries-de-la-___, French resort on the Mediterranean : MER
The beautiful seaside town of Saintes-Maries-de-la-Mer sits on the Mediterranean in the Rhône River delta. The town’s name translates as “Saint Marys of the Sea”, which refers to the three saints Mary Magdalene, Mary Salome and Mary Jacobe. These three Marys are believed by many to be the first people to see the empty tomb after the resurrection of Jesus.

Deloitte is the largest professional financial services company in the world, one of the “Big Four” alongside PricewaterhouseCoopers, Ernst & Young and KPMG. The company was founded in 1845 in London by William Welch Deloitte, the first accountant to be appointed as independent auditor of a public company (the Great Western Railway).

31. Butt of many 1970s automotive jokes : FORD /PINTO (giving “pinto bean”)
The Pinto is a small car that was made by the Ford company from 1971 to 1980. The Pinto was of course named for the type of horse. Allegations were made in 1997 that the neck of the car’s fuel tank could easily break off in a collision leading to a deadly fire. However, the allegations were never really shown to be valid.

44. Mall sweepstakes prize, maybe : SPREE
A “sweepstakes” is a lottery in which the participants pay into a fund that becomes the prize. The term “sweepstakes” comes from the Middle English word “swepestake”, the name for the person who “sweeps up” all the stakes in a game.

52. First of two columns in a fashion magazine : DOS
Dos, and don’ts.

53. Blab … or a literal hint to completing five answers in this puzzle : SPILL THE /BEANS
“To spill the beans” is to divulge a secret. The expression first appeared in American English, in the early 1900s. The phrase arose as an alternative to “spoil the beans” or “upset the applecart”.

59. Institution founded by Thos. Jefferson : UVA
The University of Virginia (UVA) was founded by Thomas Jefferson, who sat on the original Board of Visitors alongside former US Presidents James Madison and James Monroe. In fact, the original UVA campus was built on land that was once a farm belonging to President Monroe.

60. Galileo, for one : HERETIC
Galileo was a prominent supporter of heliocentrism, the principle that the Earth and the other planets revolve around the Sun. The commonly accepted model at the time was geocentrism, that the Earth was at the center of the universe. Galileo fell foul of the Roman Inquisition as a result of his views, and was found guilty of heresy in 1615. As a result, Galileo spent the rest of his life under house arrest.

64. Game whose name is derived from its sound : PING-PONG
Ping-pong is called table tennis in the UK, where the sport originated in the 1880s. Table tennis started as an after-dinner activity among the elite, and was called “wiff-waff”. To play the game, books were stacked in the center of a table as a “net”, two more books served as “”rackets” and the ball used was actually a golf ball. The game evolved over time with the rackets being upgraded to the lids of cigar boxes and the ball becoming a champagne cork (how snooty is that?). Eventually the game was produced commercially, and the sound of the ball hitting the racket was deemed to be a “ping” and a “pong”, giving the sport its alternative name.

72. What Khloé might call Kim : SIS
Khloé Kardashian managed to parlay her exposure on the reality show “Keeping Up with the Kardashians” into spin-offs called “Kourtney and Khloé Take Miami” and “Khloé & Lamar”. Guess how many episodes of those three shows that I’ve seen …

Down
2. Weigh station factor : TARE
“Tare” is the weight of a container that is deducted from the gross weight to determine the net weight, the weight of the container’s contents.

3. ___ Church, country singer with the #1 hits “Drink in My Hand” and “Springsteen” : ERIC
Eric Church is a country singer/songwriter from Granite Falls, North Carolina. In fact, Church’s second album is called “Carolina”.

6. Doctor’s diagnosis : SYNDROME
A “syndrome” is a pattern of symptoms indicating a particular condition, often medical or social in nature. The term comes from the Greek “syndromos” meaning “place where several roads meet”.

7. Historical 1991 Oliver Stone film : JFK
“JFK” is a 1991 Oliver Stone movie, a controversial one I’d say. I suppose any work that deals with the terrible assassination of President Kennedy is bound to create a stir these days. By the way, make a note in your diary. According to US law, all documents held by the government that are related to the assassination are supposed to be released to the public by 2017 …

8. Enterprise alternative : ALAMO
The third largest car rental company right now is Alamo, a relative newcomer founded in 1974. Alamo made inroads (pun intended!) into the market by popularizing the idea of “unlimited mileage”.

10. Female gametes : OVA
A gamete is a reproductive cell that has half the full complement of genes needed to make a normal cell. In sexual reproduction, it takes two gametes, one from each parent, to fuse into one cell which then develops into a new organism. The female gamete is the ovum, and the male the sperm.

19. Rap sheet entries : PRIORS
A rap sheet is a criminal record. “Rap” is a slang term dating back to the 1700s that means “blame, responsibility” as in “to take the rap” and “to beat the rap”. This usage morphed into “rap sheet” in the early 1900s.

29. TSX automaker : ACURA
The Acura TSX is a luxury version of the Honda Accord.

33. Tonto rode one : PINTO
A “pinto” is a horse with patchy markings of white mixed with another color. “Pinto” means “painted” in American Spanish.

37. Chipped-flint tool : EOLITH
Eoliths are chipped flint nodules. They were once thought to be the first stone tools, but the general opinion today is that eoliths are produced by natural processes such as glaciation.

39. Capone’s nemesis : NESS
Eliot Ness was the Treasury agent charged with the task of bringing down the notorious Chicago gangster Al Capone. When Ness took on the job in 1930, Chicago law-enforcement agents were renowned for being corrupt, for being on the take. Ness handpicked 50 prohibition agents who he thought he could rely on, later reducing the group to a cadre of 15 and ultimately just 11 trusted men. That group of 11 earned the nickname “The Untouchables”, the agents who couldn’t be bought.

43. Neighbor of Chevy Chase : BETHESDA
The community of Bethesda in Maryland lies just northwest of Washington, D.C. The original settlement in the area was called “Darcy’s Store”. a reference to the original store that drew settlers to the location along the toll road between Georgetown and Rockville. The community’s name was changed to Bethesda in 1871 by a local postmaster, after a Presbyterian church called the Bethesda Meeting House. Bethesda is home to the National Institutes of Health (NIH) and to the National Naval Medical Center. During WWII, Bethesda also hosted the Norwegian Royal Family while their country was occupied by German forces.

49. Fairway gouges : DIVOTS
A divot is a chunk of grass and earth that is removed by a golf club while striking the ball. “Divot” is derived from a Scottish word for a piece of turf or sod used as a roofing material.

51. High-end bag maker : HERMES
Hermès is a high-end manufacturer of apparel based in Paris. The company was founded in 1837 in Paris, by German immigrant Thierry Hermès.

54. Veranda in 57-Down : LANAI
A lanai is a type of veranda, a design that originated in Hawaii. A kind blog reader tells me that the etymology of “lanai” seems unclear, but that the island name of “Lana’i” is not related.

56. Stone that shimmers : OPAL
An opal is often described as having a milky iridescence, known as “opalescence”.

57. Biggest city on the Big Island : HILO
Hilo is the largest settlement on the big island of Hawai’i, with a population of over 43,000 (that’s not very many!). I love the Big Island …

61. The Marx Brothers, often : TRIO
The five Marx Brothers were born to “Minnie” and “Frenchy” Marx in New York City. The more famous older boys were Chico, Harpo and Groucho. Zeppo was the youngest brother, and he appeared in the early Marx Brothers movies. The fifth son was called Gummo, and he decided to pursue a different career off the stage.

65. Princeton Review subj. : GRE
Passing the Graduate Record Examination (GRE) is usually a requirement for entry into graduate school here in the US.