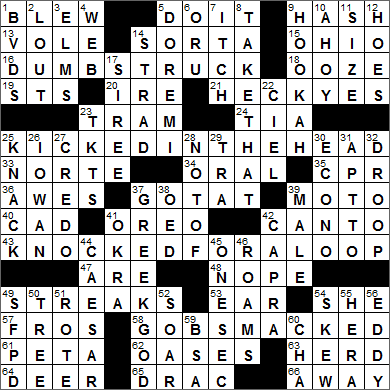 Today’s Wiki-est, Amazonian Googlies
Across
5. “Just ___” (Nike slogan) : DO IT
The Nike slogan “Just Do It” was created in an advertising meeting in 1988. Apparently the phrase was inspired by the last words of famed criminal Gary Gilmore. Gilmore faced execution by the state of Utah in 1977 and when asked if he had any last words he simply replied, “Let’s do it”. A few minutes later, Gilmore was executed by a firing squad.

13. Mouselike animal : VOLE
Vole populations can really increase rapidly. Mama vole is pregnant for just three weeks before giving birth to litters of 5-10 baby voles. Then the young voles become sexually mature in just one month! If you have one pregnant vole in your yard, within a year you could have over a hundred of the little critters.

15. Cincinnati’s home : OHIO
Cincinnati, Ohio was the first major city to be founded after the American Revolution, and indeed was the first major inland city to be founded in the whole country. Cincinnati was a boomtown in the 1800s, but it’s growth slowed as the the railroads displaced the steamboats as the major form of transportation. The city was founded in 1788, and was named “Cincinnati” two years later. It was named for the Society of Cincinnati, an organization with the mission to preserve the ideals and fellowship of the officers of Revolutionary War. The society was in turn named for Lucius Quinctius Cincinnatus. cincinnatus was farmer in ancient Rome who left his land to serve as Consul and then lawful dictator of Rome during a war emergency, before happily handing back power to the Senate after the war was won.

24. Aunt, in Acapulco : TIA
The Mexican city of Acapulco is on the southwest coast of the country, in the state of Guerrero. The name “Acapulco” translates from the local language into “at the big reeds”.

33. Direction opposite from sur : NORTE
The cardinal directions in Spanish are norte (north), este (east), sur (south) and oeste (west).

39. Mr. ___ (Peter Lorre role) : MOTO
The mysterious Mr. Moto is a Japanese secret agent who appears in six novels by American author, John P. Marquand. Mr. Moto was famously played by Peter Lorre in a series of eight films released in the 1930s.

58. Left speechless : GOBSMACKED
“Gobsmack” is slang from the British Isles. “Gob” is also slang, for a mouth. So someone who is gobsmacked has received “a smack in the mouth”, is stunned.

61. Org. that loves fur … but not on humans : PETA
People for the Ethical Treatment of Animals (PETA) is a very large animal rights organization, with 300 employees and two million members and supporters worldwide. Although the group campaigns for animal rights across a broad spectrum of issues, it has a stated focus in opposition of four practices:

65. Transylvanian count, informally : DRAC
“Dracula” is a novel written by the Irish author Bram Stoker and first published in 1897. Dracula wasn’t the first vampire of literature, but he certainly was the one who spawned the popularity of vampires in theater, film and television, and indeed more novels. Personally, I can’t stand vampire fiction …

Transylvania is a geographic region in the center of Romania. The area is very much associated with vampires ever since the publication of Bram Stoker’s novel “Dracula” that is set in Transylvania.

Down
1. Some men’s underwear : BVDS
The men’s underwear known as BVDs are made by the Bradley, Voorhees & Day. The company was started in 1876 to make bustles for women, and is named for its founders.

4. The third “w” of www : WEB
The World Wide Web (WWW) was effectively the invention of British computer scientist Tim Berners-Lee. The key to Berner-Lee’s invention was bringing together two technologies that already existed: hypertext and the Internet. I for one am very grateful …

5. Start of the musical scale : DO RE MI …
The solfa syllables are: do, re, mi, fa, sol, la & ti. The solfa scale was developed from a six-note ascending scale created by Guido of Arezzo in the 11th century. He used the first verse of a Latin hymn to name the syllables of the scale:

6. Tulsa sch. : ORU
Oral Roberts University (ORU) is a private school in Tulsa, Oklahoma. ORU was founded relatively recently, in 1963 by the late televangelist Oral Roberts. The campus includes a Prayer Tower at its center, a spectacular glass and steel structure designed by architect Frank Wallace. The tower includes an observation deck, and is a popular tourist attraction.

7. Poison ivy annoyance : ITCH
Two of the plants that are most painful to humans are poison oak and poison ivy. Poison oak is mainly found west of the Rocky Mountains, and poison ivy to the east.

9. Hashish pipe : HOOKAH
A hookah is a waterpipe, a device for smoking tobacco in which the smoke is passed through a water basin before it is inhaled.

Hashish is a drug that is derived from the Indian hemp or cannabis plant. The term “hashish” comes from the Arabic word for “grass”.

10. Sailor’s call : AHOY!
“Ahoy!” is a nautical term used to signal a vessel. When the telephone was invented by Alexander Graham Bell, he suggested that “ahoy” be used as a standard greeting when answering a call. However, Thomas Edison came up with “hello”, and we’ve been using that ever since.

14. Precious stringed instrument, informally : STRAD
Generations of the Stradivari family produced violins, the most famous of which were constructed by Antonio Stradivari.

Times Square in New York City isn’t a square at all, but rather a triangle. When the New York Times newspaper opened new headquarters in the area in 1904, the city agreed to the name “Times Square”, changing it from Longacre Square.

26. Hawkeye State native : IOWAN
Iowa is nicknamed the Hawkeye State in honor of Chief Black Hawk, a leader of the Sauk people during the War of 1812 and the Black Hawk War.

27. Words to live by : CREDO
A creed or credo is a confession of faith, or a system of belief or principles. “Credo” is Latin for “I believe”.

30. Commercial lead-in to Lodge : ECONO
Econo Lodge is a low-cost hotel chain in the Choice Hotels portfolio of brands. The chain started in 1969 as Econo-Travel, and demonstrated pretty quickly that budget-hotels were a good idea. The first hotel was built in Norfolk, Virginia and it started making money three weeks after welcoming its first guests.

37. Hermes or Hades : GREEK GOD
Hermes was the Greek god of transitions and boundaries, one who intercedes between mortals and the divine. He could move freely between the mortal and divine worlds and so was regarded as the messenger of the gods. The Roman equivalent to Hermes was the god Mercury.

Hades was the god of the underworld to the ancient Greeks. Over time, Hades gave his name to the underworld itself, the place where the dead reside. The term “Hades” was also adopted into the Christian tradition, as an alternative name for hell. But, the concept of hell in Christianity is more akin to the Greek “Tartarus”, which is a dark and gloomy dungeon located in Hades, a place of suffering and torment.

38. British ref. work : OED
The “Oxford English Dictionary” (OED) contains over 300,000 “main” entries and 59 million words in total. It is said it would take a single person 120 years to type it out in full. The longest entry for one word in the second edition of the OED is the verb “set”. When the third edition was published in 2007, the longest entry for a single word became the verb “put”. Perhaps not surprisingly, the most-quoted author in the OED is William Shakespeare, with his most quoted work being “Hamlet”. The most-quoted female author is George Eliot (aka Mary Ann Evans).

41. Gumbo ingredient : OKRA
Gumbo is a type of stew or soup that originated in Louisiana. The primary ingredient can be meat or fish, but to be true gumbo it must include the “holy trinity” of vegetables, namely celery, bell peppers and onion. Okra used to be a requirement but this is no longer the case. Okra gave the dish its name as the vernacular word for the African vegetable is “okingumbo”, from the Bantu language spoken by many of the slaves brought to America.

42. Frank who directed “It’s a Wonderful Life” : CAPRA
I can’t tell you how many of Frank Capra’s movies are on my list of all-time favorites. He directed such classics as “It Happened One Night”, “Mr. Deeds Goes to Town”, “Lost Horizon”, “Mr. Smith Goes to Washington”, “Meet John Doe”, “Arsenic and Old Lace” and the holiday favorite “It’s a Wonderful Life”. Capra was the first person to win three directorial Oscars: for “It Happened One Night”, “Mr. Deeds Goes to Town” and “You Can’t Take It With You”. Capra also did his bit during WWII, enlisting just a few days after Pearl Harbor was attacked. Given his great talent, and the fact that he enlisted at the relatively advanced age of 44, the US Army put him to work directing 11 documentary war films in the “Why We Fight” series, for which he was awarded the Distinguished Service Medal.

The Christmas Classic “It’s a Wonderful Life” was released in 1946, and is a Frank Capra movie starring James Stewart and Donna Reed. The film’s screenplay was adapted from a short story called “The Greatest Gift” by Philip Van Doren Stern. Remember the famous swimming pool scene? That was shot in Beverly High School gym, and the pool is still in use today.

44. Roman ruler who said “The die is cast” : CAESAR
Supposedly, when Julius Caesar marched back to Rome from Gaul, as he defiantly “crossed the Rubicon” with his army, he uttered the words “Alea iacta est” (“The die is cast”).

49. Bay Area force: Abbr. : SFPD
The San Francisco Police Department (SFPD) is the 11th largest police department in the country. The SFPD dates back to the days of the Gold Rush, being founded in 1849 as a force of 35 officers. SFPD has featured a lot in movies and on television. The most famous films are probably “Bullitt”, the “Dirty Harry” series and “48 Hrs.” On television there was “Ironside”, “The Streets of San Francisco” and now “Monk”.

50. Beech or birch : TREE
Beech wood is prized as firewood as it burns for many hours with a bright flame and is easily split.

Birch is a hardwood tree. The bark of the birch has eye-like features, leading to the trees nickname of “the Watchful Tree”.

55. Wife of Zeus : HERA
In Greek mythology, Hera was the wife of Zeus and was noted for her jealous and vengeful nature, particularly against those who vied for the affections of her husband. The equivalent character to Hera in Roman mythology was Juno. Hera was the daughter of Cronus and Rhea.