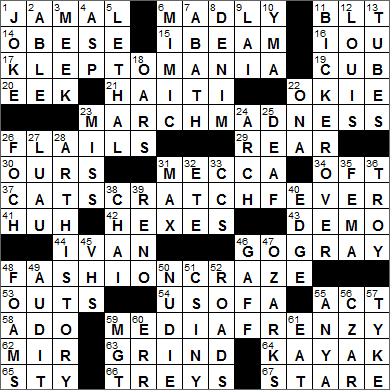 CROSSWORD SETTER: Michael Dewey
THEME: Driven to the End … each of today’s themed answers ends with a word describing a state of being really driven:

17A. Compulsion to steal : KLEPTOMANIA
23A. What a bracketologist is caught up in : MARCH MADNESS
37A. 1977 hard-rock hit by Ted Nugent : CAT SCRATCH FEVER
48A. Miniskirts or oversize sunglasses, once : FASHION CRAZE
59A. What a major scandal results in : MEDIA FRENZY

Today’s Wiki-est, Amazonian Googlies
Across
1. Actor Malcolm-___ Warner of “The Cosby Show” : JAMAL
Malcolm-Jamal Warner was the child actor who played Theo Huxtable on “The Cosby Show”. You can see the grown-up Warner today, playing Dr. Alex Reed on the BET sitcom “Reed Between the Lines”.

11. Sandwich often on toasted bread : BLT
The BLT (bacon, lettuce and tomato) is the second-most popular sandwich in the US, after the plain old ham sandwich.

17. Compulsion to steal : KLEPTOMANIA
Kleptomania is the compulsion to steal, whether or not one is need of what is stolen. The term derives from the Greek word for “to steal”, “kleptein”, with the suffix “-mania”.

21. Port-au-Prince’s land : HAITI
The capital city of Haiti is Port-au-Prince. The city was hit by a devastating earthquake in January of 2010. The official government estimate of the death toll stands at 230,000 people, with many bodies never recovered.

22. Depression-era migrant : OKIE
“Okies” was a derogatory term used during the Dust Bowl of the 1930s for farming families who migrated from Oklahoma (hence the name), Arkansas, Kansas and Texas in search of agricultural jobs in California. The road used by many of these migrant families was Route 66, which is also called “Mother Road”.

23. What a bracketologist is caught up in : MARCH MADNESS
March Madness is the name given to (among others) the NCAA Men’s Division 1 Basketball Championship, held in spring each year.

29. Keister : REAR
Back in the early 1900s a “keister” was a safe or a strongbox. It has been suggested that this term was then used as slang by pickpockets for the rear trouser pocket in which one might keep a wallet. From this usage, keister appeared as a slang term for the buttocks in the early 1930s.

30. “Yours, Mine and ___” : OURS
The famous sitcom “The Brady Bunch” originally aired from 1969 to 1974 on ABC. If you ever see a movie called “Yours, Mine and Ours” starring Lucille Ball and Henry Fonda (and remade with Dennis Quaid and Rene Russo), you might notice a similarity in storyline. It was because of the success of the 1968 movie that ABC decided to go ahead with the development of “The Brady Bunch”.

31. Hajj destination : MECCA
Mecca is in the Makkah province of Saudi Arabia and is the holiest city in Islam. Every year several million Muslims perform the Hajj, a holy pilgrimage to Mecca.

37. 1977 hard-rock hit by Ted Nugent : CAT SCRATCH FEVER
Ted Nugent was the lead guitarist with the Amboy Dukes, and is now a successful solo artist.

42. Puts the whammy on : HEXES
“Hexen” is a German word meaning “to practice witchcraft”. The use of the word “hex” in English started with the Pennsylvania Dutch in the early 1800s.

44. “Terrible” Russian autocrat : IVAN
The Grand Prince of Moscow Ivan IV became known as Ivan the Terrible. The name “terrible” is a translation from Russian, and perhaps creates the wrong impression about the man. The Russian word is “Grozny”, which is more akin to “strict” and “powerful” rather than “cruel” or “abominable”.

54. Stars and Stripes land, informally : US OF A
Legend has it that Betsy Ross made the first American flag for General George Washington. However, this story only surfaced during the centennial celebrations of 1876, and although Betsy Ross was indeed one of several flag makers in Philadelphia in the days of George Washington, sadly there’s no definitive evidence that Ross provided that first Stars and Stripes.

58. Foofaraw : ADO
“Foofaraw” is excessive or flashy ornamentation, or a fuss over something that is unimportant.

62. Onetime Russian space station : MIR
The Russian Mir Space Station was a remarkably successful project, with the station still holding the record for the longest continuous manned presence in space, at just under ten years. Towards the end of the space station’s life however, the years began to take their toll. There was a dangerous fire, multiple system failures, and a collision with a resupply ship. The Russian commitment to the International Space Station drained funds for repairs, so Mir was allowed to reenter the Earth’s atmosphere and burn up in 2001.

64. Boat with a double-bladed paddle : KAYAK
The umiak is a type of boat used by Eskimo people. The term “umiak” means “woman’s boat”, whereas “kayak” means “man’s boat”.

Knock, knock!
Who’s there?
Irish
Irish who?
Irish you in the name of the law!

7. “Splish splash, I was takin’ ___” (1958 lyric) : A BATH
“Splish Splash” was a hit for Bobby Darin in 1958, and was the result of a bet. The first line (Splish splash, I was taking a bath) was suggested by Jean Kaufman, the mother of disk jockey “Murray the K”. Murray wagered that Darin couldn’t write a song beginning with those words. Darin won the bet …

9. China’s Chou En-___ : LAI
Zhou Enlai (also Chou En-Lai) was the first government leader of the People’s Republic of China and held the office of Premier from 1949 until he died in 1976. Zhou Enlai ran the government for Communist Party Leader Mao Zedong, often striking a more conciliatory tone with the West than that of his boss. He was instrumental, for example, in setting up President Nixon’s famous visit to China in 1972. Zhou Enlai died just a few months before Mao Zedong, with both deaths leading to unrest and a dramatic change in political direction for the country.

12. Designer Vuitton : LOUIS
Louis Vuitton founded his fashion house in Paris in 1854. His first product was a trunk, a piece of traveling luggage.

23. ___ America pageant : MISS
The Miss America beauty pageant started out as a marketing ploy in the early twenties to attract tourists to the Atlantic City boardwalk after Labor Day.

26. French W.W. I general Ferdinand ___ : FOCH
Marshal Ferdinand Foch was a French military officer who participated in WWI. Foch’s reputation was at its height after victories in the First Battle of the Marne in 1914, and the Second Battle of the Marne in 1918. After he died in 1929, Fochs was interred in Les Invalides in Paris, next to the tomb of Napoleon Bonaparte.

28. Subject that includes Goya and Gauguin : ART HISTORY
Francisco Goya was a Spanish painter, often called the last of the Old Masters and the first of the moderns. Two of Goya’s most famous works are “The Nude Maja” and “The Clothed Maja”.

Paul Gauguin was a French artist in the Post-Impressionist period. Gauguin was a great friend of Vincent van Gogh, and indeed was staying with him in Arles when van Gogh famously cut off his ear. Famously, Gauguin “fled” to Tahiti in 1891, to escape the conventions of European life. He painted some of his most famous works on the island.

32. Summer, in Giverny : ETE
Giverny is a commune in northern France, most famous as the location of artist Claude Monet’s home. It was in Giverny that Monet painted his famous “Water Lilies”.

35. Relief org. after hurricanes and tornadoes : FEMA
Federal emergency management has been structured for over 200 years, but what we know today as the Federal Emergency Management Agency (FEMA) was created in 1979 in an Executive Order issued by President Jimmy Carter.

36. Ancient city undone by a large wooden horse : TROY
The story of the Wooden Horse of Troy is told in the Virgil’s poem “The Aeneid”. According to the tale, the city of Troy finally fell to Greeks after a siege that had lasted for ten years. In a ruse, the Greeks sailed away in apparent defeat, leaving behind a large wooden horse. Inside the horse were hidden 30 crack soldiers. When the horse was dragged into the city as a victory trophy, the soldiers sneaked out and opened the city’s gates. The Greeks returned under cover of night and entered the open city.

38. Black tea-and-milk drink : CHAI
Chai is a drink made from spiced black tea, honey and milk, with “chai” being the Hindi word for “tea”. We often called tea “a cup of char” growing up in Ireland, with “char” being our slang word for tea, derived from “chai”.

39. Nevada city : RENO
Reno, Nevada was named in honor of Major General Jesse Lee Reno, a Union officer killed in the Civil War. The city has a famous “Reno Arch”, a structure that stands over the main street. The arch was erected in 1926 to promote an exposition planned for the following year. After the expo, the city council decided to keep the arch and held a competition to decide what wording should be displayed, and the winner was “The Biggest Little City in the World”.

45. Pre-DVD format : VHS
The video standard known as VHS is more fully referred to as the Video Home System. VHS was one of many standards touted by various manufacturers in the seventies. The biggest rival to VHS was Betamax, but we all knew which of the two standards won the final round in that fight.

46. Heavy fishing hook : GAFF
A gaff is that dangerous-looking metal hook on the end of a pole that fishermen use to drag large fish into their boats.

47. Missouri mountains : OZARKS
The Ozark Mountains aren’t really mountains geographically speaking, and the Ozarks are better described by the alternate name, the Ozark Plateau. It’s not really certain how the Ozarks got their name, but my favorite theory is that “Ozarks” is the phonetic spelling of “aux Arks”, short for “of Arkansas” in French.

51. Hit TV drama starring Gary Sinise : CSI: NY
Actor Gary Sinise was nominated for a Best Supporting Actor Oscar for playing Lieutenant Dan Taylor in the 1994 film “Forrest Gump”. Senise has been playing the lead in television’s “CSI: NY” since 2004. The actor was awarded the Presidential citizen medal by President Bush for his work helping Iraqi school children and his work with the USO.

55. Author Seton : ANYA
Anya Seton was the pen name of Ann Seton, an author of historical romances from New York City. Seton’s 1944 novel “Dragonwyck” was released into theaters in 1946 and starred Gene Tierney and Walter Huston.

56. Old Russian autocrat : CZAR
The term czar (also tsar) is a Slavic word that was first used as a title by Simeon I of Bulgaria in 913 AD. “Czar” is derived from the word “Caesar”, which was synonymous with “emperor” at that time.

57. Rug rat : TYKE
“Tyke” has been used playfully to describe a young child since at least 1902, but for centuries before that a tyke was a cur or mongrel, or perhaps a lazy or lower-class man.