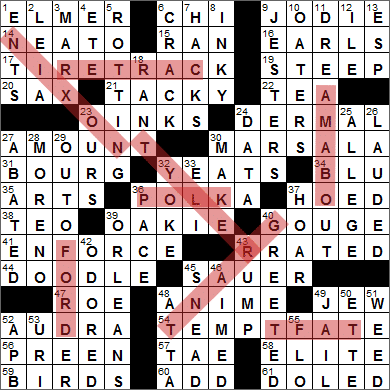 The last names of eight U.S. presidents are hidden in this puzzle’s completed grid, reading across, back, up, down and diagonally, word-search style. Can you find them all?

I’ve highlighted the eight presidents in my grid:

Today’s Wiki-est, Amazonian Googlies
Across
1. Fudd of cartoondom : ELMER
Elmer Fudd is one of the most famous of all the Looney Tunes cartoon characters, the hapless nemesis of Bugs Bunny. If you have never seen it, check out Elmer and Bugs in the marvelous “Rabbit of Seville”, a short cartoon that parodies Rossini’s “Barber of Seville”. Wonderful stuff …

6. Site of the 1968 Democratic convention, informally : CHI
The 1968 Democratic Convention in Chicago was held to nominate a presidential nominee, after President Lyndon B. Johnson had announced that he would not seek reelection. The nominees chosen were Vice President Hubert H. Humphrey and Senator Edmund S. Muskie. The convention was prefaced by two tragic assassinations: Martin Luther King, Jr. in April of that year, and presidential hopeful Senator Robert F. Kennedy just two months later.

9. Foster of “Taxi Driver” : JODIE
The wonderful Jodie Foster got her big break in movies early in her life, playing a very young prostitute in Martin Scorsese’s 1976 film “Taxi Driver”. Sadly, her appearance in “Taxi Driver” led to her being stalked by an obsessed John Hinckley, Jr. Hinckley called Foster on the phone, sent her love letters, and followed her on campus while she was attending Yale. In 1981, Hinckley famously shot and wounded President Reagan, claiming that he believed an assassination of the President would impress Foster.

16. Nobles above viscounts : EARLS
In Britain, There are five ranks of peer, namely duke, marquess, earl, viscount and baron, in descending order.

20. Instrument for Bill Clinton, informally : SAX
President Bill Clinton learned to play the saxophone when he was a boy. He was good enough to play first chair in the saxophone section of the Arkansas state band. My guess is that the former president’s most famous performance on the sax during his political career was on “The Arsenio Hall Show” in 1992. Clinton was a candidate for president at that time, and make quite a splash in the news media when he played “Heartbreak Hotel” on the show.

21. Lacking taste : TACKY
Something “tacky” is “in bad taste”. The term derives from the noun “tackey” that was used in the early 1800s to describe a neglected horse.

22. ___ Party (modern political group) : TEA
The Tea Party Caucus in the US Congress is chaired by Minnesota Representative Michele Bachmann. The stated focus for the caucus is fiscal responsibility and limited government, while adhering to the groups interpretation of the US Constitution. Top contributors to the caucus are health professionals, retirees, the real estate industry as well as oil and gas interests.

30. Veal ___ : MARSALA
Veal Marsala is a French-Italian dish made from veal cooked with mushrooms in Marsala wine.

34. ___-ray Disc : BLU
A CD player reads the information on the disc using a laser beam. The beam is produced by what’s called a laser diode, a device similar to a light-emitting diode (LED) except that a laser beam is emitted. That laser beam is usually red in CD and DVD players. Blu-ray players are so called as they use blue lasers.

36. Many a Lawrence Welk dance tune : POLKA
The polka is a dance from central Europe, one that originated in Bohemia in the mid-1800s. It’s thought that “polka” comes from a Czech word meaning “little half”, reflecting the little half-steps included in the basic dance.

The style of music with which bandleader Lawrence Welk was associated became known as “champagne music”. The term was coined by a dancer in the William Penn Hotel in Pittsburgh when Welk was appearing there with his band in the thirties.

38. N.F.L.’s Manti ___ : TE’O
Manti Te’o is college football player who was in the news not too long ago. Te’o was noted for playing particularly well after the death of his grandmother and girlfriend. It turned out that his relationship with the “girlfriend” was an online affair and a hoax. A male acquaintance of Te’o had posed as a girl and lured him into a relationship. Wanting to put an end to the deception, the hoaxer “killed off” the girlfriend by “giving” her leukemia.

39. Jack who played Napaloni in “The Great Dictator” : OAKIE
Jack Oakie was the stage name of actor Lewis Offield, who was originally from Missouri. Offield was raised in Oklahoma, and for this reason picked up the nickname “Oakie”. The “Jack” in his stage name came from the first character that he portrayed in a play. Oakie played Benzino Napaloni in Charlie Chaplin’s “The Great Dictator”, a character that was very much based on Italian dictator Benito Mussolini.

45. Lip-puckering, as kraut : SAUER
“Sauerkraut” translates from German as “sour herb” or “sour cabbage”. During WWI, sauerkraut producers changes its name in order to distance their product from the “enemy”. They called it “Liberty cabbage”.

47. Sushi eggs : ROE
Sushi is a Japanese dish that has as its primary ingredient cooked, vinegared rice. The rice is usually topped with something, most often fish, and can be served in seaweed rolls. If you want raw fish by itself, then you have to order “sashimi”.

49. Many an Israeli : JEW
The area that is now Israel was ruled by the British after WWI as the British Mandate of Palestine. The British evacuated the area after WWII, largely responding to pressure from both Jewish and Arab nationalist movements. The British Mandate expired on 14 May 1948 and the State of israel was established at the same time. This declaration of a new state was followed by the immediate invasion of the area by four Arab countries and the start of the 1948 Arab-Israeli War. A ceasefire was declared after a year of fighting and tension has persisted in the region ever since.

2. “Star Wars” princess : LEIA
Princess Leia is Luke Skywalker’s sister in the original “Star Wars” trilogy and was played by Carrie Fisher. Carrie Fisher has stated that she hated the famous “cinnamon bun hairstyle” that she had to wear in the films, as she felt it made her face look too round. She also had to to sit for two hours every day just to get her hair styled. Two hours to get your hair done? It takes me just two seconds …

3. Harpo, Zeppo or Groucho : MARX
The five Marx Brothers were born to “Minnie” and “Frenchy” Marx in New York City. The more famous older boys were Chico, Harpo and Groucho. Zeppo was the youngest brother, and he appeared in the early Marx Brothers movies. The fifth son was called Gummo, and he decided to pursue a different career off the stage.

4. Summer in Somme : ETE
The Somme is a department in the very north of France, in the Picardy region. The Somme is famous as the site of devastating battles during WWI.

7. Political ___ (partisan sorts) : HACKS
A political hack is someone who has renounced or surrendered integrity and independence in return for money or some other reward.

8. Jet-black : INKY
The color “jet black” takes its name from the minor gemstone known as jet. The gemstone and the material it is made of takes its English name from the French name: “jaiet”.

10. Westerns, in old lingo : OATERS
The term “oater” that is used for a western movie comes from the number of horses seen, as horses love oats!

18. Tirade : RANT
A “tirade” is a long and vehement speech, and is a word that came into English from French. “Tirade” can have the same meaning in French, but is also the word for “volley”. So, a tirade is a “volley of words”.

26. Eulogized : LAUDED
A eulogy is a speech or piece of writing that praises someone who has recently passed away or who is retiring. “Eulogy” comes from the Greek word “eulogia” meaning “praise”.

28. Oscar-winning Rita : MORENO
The Puerto Rican singer, dancer and actress Rita Moreno is one of the few performers to have won an Oscar, Emmy, Grammy and Tony. Moreno got her big break, and won her Oscar, for playing Anita in the 1961 screen adaption of “West Side Story”.

32. Oxen connector : YOKE
A yoke is a wooden beam used between a pair of oxen so that they are forced to work together.

33. ___ Lilly & Co. : ELI
Eli Lilly is the largest corporation in the state of Indiana. The founder, Eli Lilly, was a veteran of the Union Army in the Civil War, and a failed Mississippi plantation owner. Later in life he returned to his first profession and opened a pharmaceutical operation to manufacture drugs and sell them wholesale. Under Lilly’s early guidance, the company was the first to create gelatin capsules to hold medicines and the first to use fruit flavoring in liquid medicines.

37. Winter frost : HOAR
The Old English word “har” meant “gray, venerable, old”, and came into English as “hoar” (and later “hoary”) with the same meaning. The term “hoar-frost” dates back to the 13th century, and reflects the similarity of the white feathers of frost to the gray/white of an old man’s beard.

39. New ___, site of the 1988 Republican convention : ORLEANS
The 1988 Republican National Convention was held in the Louisiana Superdome in New Orleans. The nomination of Vice President George W. Bush as the presidential candidate was a foregone conclusion. However, the selection of Senator Dan Quayle for the bottom of the ticket was a piece of news that was held until the second day of the convention.

45. Golf’s Sam : SNEAD
Sam Snead was probably the most successful golfer never to win a US Open title, as he won a record 82 PGA Tour events. He did win seven majors, but never the US Open. He was also quite the showman. He once hit the scoreboard at Wrigley Field stadium with a golf ball, by teeing off from home plate.

49. Monopoly space that says “Just Visiting” : JAIL
The commercial game of Monopoly is supposedly a remake of “The Landlord’s Game” created in 1903 by a Quaker woman called Lizzie Phillips. Phillips used her game as a tool to explain the single tax theory of American economist Henry George. The Landlord’s Game was first produced commercially in 1924. The incredibly successful derivative game called Monopoly was introduced in 1933 by Charles Darrow, who became a very rich man when Parker Brothers bought the rights to the game just two years later in 1935.

52. Urgent police message, for short : APB
An All Points Bulletin (APB) is a broadcast from one US law enforcement agency to another.

53. Pseudopsychic Geller : URI
Uri Geller’s most famous performance is perhaps his uncomfortable failure on “The Tonight Show” with Johnny Carson in 1973. Carson “hi-jacked” Geller on live television by providing him with spoons to bend and watches to start, none of which had been available to Geller before the show aired. Clever!

55. Rapper ___ Rida : FLO
Rapper Tramar Dillard is better known as rapper Flo Rida. As you might have guessed, Flo Rida was born in the state of Florida.