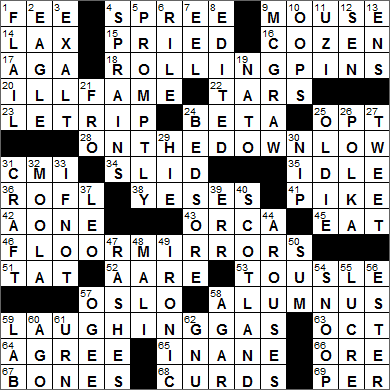 CROSSWORD SETTER: Robert Seminara
THEME: ROFL at the Start … today’s themed answers start with a words that goes to make up the common texting abbreviation ROFL: ROLLING ON THE FLOOR LAUGHING.

18A. Items for flattening dough : ROLLING PINS
28A. Secretly : ON THE DOWN LOW
46A. Some dressing room conveniences : FLOOR MIRRORS
59A. Nitrous oxide : LAUGHING GAS

Today’s Wiki-est, Amazonian Googlies
Across
16. Deceive : COZEN
What a lovely verb, “to cozen”! Meaning to cheat or hoodwink, it comes from the Middle English word “cosin” meaning fraud or trickery.

17. Turkish title : AGA
“Aga” (also “agha”) is a title that was used by both civil and military officials in the Ottoman Empire.

41. Toll road : PIKE
Back in the 15th century a “turnpike” was a defensive barrier across a road. By the 17th century the term was used for a barrier that stopped travellers until a toll was paid. By the 18th century a turnpike (sometimes “pike”) was the name given to a road with a toll.

43. Boat in “Jaws” : ORCA
“Jaws” is a thrilling 1975 movie directed by Steven Spielberg that is based on a novel of the same name by Peter Benchley. The film has a powerful cast, led by Roy Scheider, Richard Dreyfuss and Robert Shaw. “Jaws” was perhaps the first “summer blockbuster” with the highest box office take in history, a record that stood until “Star Wars” was released two years later.

52. Longest river wholly in Switzerland : AARE
The Aar (also called the “Aare” in German) is the longest river entirely in Switzerland. A famous spot along the Aar is the Reichenbach Falls in the center of the country, actually a series of waterfalls near the city of Meiringen. These falls are renowned in the world of literature as it was here that Sherlock Holmes fell to his supposed doom with his nemesis Professor Moriarty (in “The Adventure of the Final Problem”).

57. Norway’s capital : OSLO
Oslo is the capital of Norway. The city of Oslo burns trash to fuel half of its buildings, including all of its schools. The problem faced by the city is that it doesn’t generate enough trash. So, Oslo imports trash from Sweden, England and Ireland, and is now looking to import some American trash too.

58. College reunion attendee : ALUMNUS
An “alumnus” (plural … alumni) is a graduate or former student of a school or college. The female form is “alumna” (plural … alumnae). The term comes into English from Latin, in which alumnus means foster-son or pupil. “Alum” is an informal term used for either an alumna or an alumnus.

59. Nitrous oxide : LAUGHING GAS
Laughing gas is the common name for nitrous oxide. Nitrous oxide is used as an anesthetic, particularly by dentists. It is also used in motor racing to increase the power output of engines. Laughing gas was first synthesized by the English chemist Joseph Priestly, but it was Humphrey Davy who discovered its potential as an anesthetic. Once it was realized that the gas could give the patient a fit of the giggles, “laughing gas parties” became common among those could afford them.

63. Columbus Day mo. : OCT
The discovery of the New World by Christopher Columbus is celebrated with a national holiday in many countries. Here in the US we have Columbus Day, and in the Bahamas there is Discovery Day, and the Day of the Americas in Uruguay.

66. Beaver State: Abbr. : ORE
Oregon’s most widely-known nickname is the Beaver State. However, it is also called the Union State, the Pacific Wonderland, the Sunset State and the Webfoot State.

68. Whey’s partner in a nursery rhyme : CURDS
Little Miss Muffet sat on a tuffet eating her curds and whey, in the popular nursery rhyme. A tuffet is a low seat or a footstool, another word for a pouffe or a hassock. When milk curdles it separates into two parts, the solid curds and the liquid whey.

Down
2. Two under par : EAGLE
The following terms are routinely used in golf for scores relative to par:

11. Arm of Israel : UZI
The first Uzi submachine gun was designed in the late 1940s by Major Uziel Gal of the Israel Defense Forces who gave his name to the gun.

12. Schumer or Shaheen: Abbr. : SEN
Chuck Schumer is the senior US Senator from New York, a Democrat (i.e. D-NY). Schumer is the third-ranking Democrat in the Senate, after Majority Leader Harry Reid and Majority Whip Dick Durbin.

13. U.S.N.A. grad : ENS
Ensign is (usually) the most junior rank of commissioned officer in the armed forces. The name comes from the tradition that the junior officer would be given the task of carrying the ensign flag.

19. What 26 countries in Eur. belong to : NATO
The North Atlantic Treaty Organization (NATO) was founded not long after WWII in 1949 and is headquartered in Brussels, Belgium. The first NATO Secretary General was Lord Ismay, Winston Churchill’s chief military assistant during WWII. Famously, Lord Ismay said the goal of NATO was “to keep the Russians out, the Americans in, and the Germans down.”

27. Message that might include an “@” and a “#” : TWEET
I have never tweeted in my life, and have no plans to do so. Twitter is a microblogging service that limits any post sent to just 140 characters. In a sense, it is similar to this blog. Here I send out a post once a day containing information that I think might be useful to folks (thank you for reading!). I don’t think I could send out much of interest using just 140 characters.

37. Only three-letter zodiac sign : LEO
Leo is the fifth astrological sign of the Zodiac. People born from July 13 to August 23 are Leos.

40. Site of a 2014 vote for independence : SCOTLAND
The people of Scotland participated in a referendum on independence from the United Kingdom in 2014. The result was that 55% of the electorate voted against the proposition “Should Scotland be an independent country?”

47. Symptoms of poison ivy : RASHES
Two of the plants that are most painful to humans are poison oak and poison ivy. Poison oak is mainly found west of the Rocky Mountains, and poison ivy to the east.

48. French Sudan, today : MALI
The Republic of Mali is a landlocked country in western Africa, south of Algeria. Formerly known as French Sudan, Mali’s most famous city is Timbuktu.

56. Banana oil, e.g. : ESTER
Esters are very common chemicals. The smaller, low-molecular weight esters are usually pleasant smelling and are often found in perfumes. At the other end of the scale, the higher-molecular weight nitroglycerin is a nitrate ester and is very explosive, and polyester is a huge molecule and is a type of plastic. Fats and oils found in nature are fatty acid esters of glycerol.

57. Arch type : OGEE
An ogee is a type of S-curve. Specifically it is a figure consisting of two arcs that curve in opposite directions (like an S) but both ends of the curve end up parallel to each other (which is not necessarily true for an S). An ogee arch is composed of two ogees, with one being the mirror of the other and meeting at the arch’s apex.

58. Culture medium in a 59-Down : AGAR
Agar (also “agar-agar”) is a jelly extracted from seaweed that has many uses. Agar is found in Japanese desserts, and can also be used as a food thickener or even as a laxative. In the world of science it is the most common medium used for growing bacteria in Petri dishes.

62. African antelope : GNU
A gnu is also known as a wildebeest, and is an antelope native to Africa. “Wildebeest” is actually the Dutch word for “wild beast”.