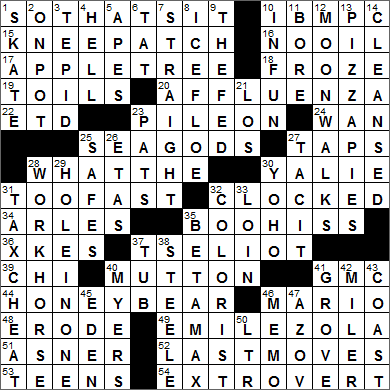 Today’s Wiki-est, Amazonian Googlies
Across
1. “Eureka!” : SO THAT’S IT!
Eureka translates from Greek as “I have found it”. The word is usually associated with Archimedes, uttered as he stepped into his bath one day. His discovery was that the volume of water that was displaced was equal to that of the object (presumably his foot) that had been submerged. He used this fact to determine the volume of a crown, something he needed in order to determine if it was made of pure gold or was a forgery.

10. Home tech product discontinued in 1987 : IBM PC
The original IBM Personal Computer is model number 5150, which was introduced to the world on August 12, 1981. The term “personal computer” was already in use, but the success of the IBM 5150 led to the term “PC” being used for all computer products compatible with the IBM platform.

16. Request for a hero : NO OIL
“Hero” is another name for a submarine sandwich. The hero originated in New York City in the 1800s among Italian immigrants who wanted an Italian sandwich that reminded them of home. The name “hero” was coined in the 1930s, supposedly by a food critic in the “New York Herald Tribune” when he wrote that “one had to be a hero” to finish the gigantic sandwich. Hero is a prevalent term to this day in New York City, reserved for a submarine sandwich with an Italian flavor.

17. Source of inspiration for Sir Isaac Newton, famously : APPLE TREE
Sir Isaac Newton was one of the most influential people in history, the man who laid the groundwork for all of classical mechanics. The story about an apple falling on his head, inspiring him to formulate his theories about gravity, well that’s not quite true. Newton often told the story about observing an apple falling in his mother’s garden and how this made him acutely aware of the Earth’s gravitational pull. However, he made no mention of the apple hitting him on the head.

20. “Illness” affecting the wealthy : AFFLUENZA
“Affluenza” night be described as the obsessive pursuit of perceived wealth accompanied by debt, anxiety and waste. The term is a portmanteau of “affluent” and “influenza”.

22. What a gate change might affect: Abbr. : ETD
Estimated time of departure (etd)

27. A little night music : TAPS
“Taps” is played nightly by the US military, indicating “lights out”. It’s also known as “Butterfield’s Lullaby” as it is a variation of an older bugle call named the “Scott Tattoo”, arranged during the Civil War by the Union Army’s Brigadier General Daniel Butterfield. The tune is called “taps”, from the notion of drum taps, as it was originally played on a drum, and only later on a bugle. The whole tune comprises just 24 notes, with there only being four different notes within the 24 i.e. “low G”, C, E and “high G”. Minimalism at its best …

30. “Y” athlete : YALIE
The Yale Bulldogs are the athletic teams of Yale University. The Yale school mascot is “Handsome Dan”, the Yale bulldog. The Bulldogs’ logo features a bulldog in front of a letter Y.

34. “The Painter of Sunflowers” setting : ARLES
A few years ago I had the privilege of living just a short car-ride from the beautiful city of Arles in the South of France. Although Arles has a long and colorful history, the Romans had a prevailing influence over the city’s design. Arles has a spectacular Roman amphitheater, arch, circus as well as old walls that surround the center of the city. In more modern times, it was a place Vincent van Gogh often visited, and where he painted his famous “Cafe Terrace at Night”, as well as “Bedroom in Arles”.

“The Painter of Sunflowers” is a portrait by Paul Gauguin and his friend and fellow-artist Vincent van Gogh. Gauguin created the work while visiting van Gogh in Arles in 1888.

36. Classic Jaguars : XKES
Jaguar started out as a manufacturer of sidecars for motorcycles back in 1922, when the company was known as the Swallow Sidecar Company (SS for short). The company changed its name to Jaguar after WWII, because of the unfortunate connotations of the letters “SS” at that time.

37. Who said “Genuine poetry can communicate before it is understood” : TS ELIOT
The author T. S. Eliot was the son of Henry Ware Eliot and Charlotte Champe Stearns, so his full name was Thomas Stearns Eliot (TSE).

39. Life force, in meditation : CHI
In Chinese culture “qi” or “chi” is the life force in any living thing.

44. Animal with a sweet tooth : HONEY BEAR
The sun bear is native to Southeast Asia, but is endangered due to deforestation that destroys its habitat. The sun bear is sometimes called the honey bear as it loves honey and honeycombs.

46. First video game character to be honored with a figure in the Hollywood Wax Museum : MARIO
Mario Bros. started out as an arcade game back in 1983, developed by Nintendo. The more famous of the two brothers, Mario, had already appeared in an earlier arcade game “Donkey Kong”. Mario was given a brother called Luigi, and the pair have been around ever since. In the game, Mario and Luigi are Italian American plumbers from New York City.

The Hollywood Wax Museum is the longest continually-operating wax museum in the country, having opened for business in 1965.

49. Author who was the title subject of the Best Picture of 1937 : EMILE ZOLA
The most famous work of French writer Émile Zola is his 1898 open letter “J’Accuse!” written to then French president Félix Faure. The letter was published on the front page of a leading Paris newspaper, and accused the government of anti-Semitism in its handling of the trial of Captain Alfred Dreyfus. Dreyfus was a Jewish military officer in the French army, falsely accused and convicted of spying for Germany. Even after the error was discovered, the government refused to back down and let Dreyfus rot away on Devil’s Island rather than admit to the mistake. It wasn’t until 1906, 12 years after the wrongful conviction, that Dreyfus was freed and reinstated, largely due to the advocacy of Emile Zola.

“The Life of Emile Zola” is a 1937 film about the French author Émile Zola, with Paul Muni playing the title role. The film won the Oscars for Best Picture and Best Screenplay.

51. Grant presenter? : ASNER
Ed Asner is most famous for playing the irascible but lovable Lou Grant on “The Mary Tyler Moore Show” and on the spin-off drama “Lou Grant”. Off-screen Asner is noted for his political activism. He served two terms as president of the Screen Actors Guild, and was very involved in the 1980 SAG strike. When “Lou Grant” was cancelled in in 1982, despite decent ratings, there was a lot of talk that the cancellation was a move by the network against Asner personally. In fact, one of Anser’s activist colleagues, Howard Hesseman (who played Johnny Fever) found that his show “WKRP in Cincinnati” was also cancelled … on the very same day.

2. High, in a way : ON POT
“Potiguaya” is the Mexican-Spanish word for “marijuana leaves”. The slang name “pot” comes from “potiguaya”.

4. “A half-filled auditorium,” to Frost : HELL
The wonderful poet Robert Frost was a native of San Francisco, but lived most of life in New England. He also spent a few years in England, just before WWI. Frost was well recognized for his work during his lifetime, and received four Pulitzer Prizes for Poetry.

5. Some early astronauts : APES
Before humans entered into space, several countries launched vehicles carrying monkeys or apes, and the practice continues today. The latest monkeys into space have been launched on rockets built and operated by Iran.

6. Gang symbol, for short : TAT
The word “tattoo” (often shortened to “tat”) was first used in English in the writings of the famous English explorer Captain Cook. In his descriptions of the indelible marks adorning the skin of Polynesian natives, Cook anglicized the Tahitian word “tatau” into our “tattoo”.

8. Something fallen off a shelf? : ICE FLOE
An ice floe is a sheet of ice that has separated from an ice field and is floating freely on the ocean.

9. Market leader : THE FED
The Federal Reserve System is more usually known simply as “the Fed”, and is the central banking system of the US. It was introduced in 1913 in response to a number of financial panics at the beginning of the 20th century. The original role for the Fed was to act as a lender of last resort, in case there was a run on a bank. This can happen as most of the money that is deposited by customers in a bank is reinvested by that bank, so it has very little liquid cash available. If too many customers look for their money at one time, then the bank can be short of cash and this can start a “run”. The Fed’s responsibilities have broadened since those early days …

26. HHH : ETAS
Eta is the seventh letter of the Greek alphabet, and is a forerunner of our Latin character “H”. Originally denoting a consonant, eta was used as a long vowel in Ancient Greek.

31. Al Capone, famously : TAX CHEAT
The Chicago gangster Al Capone was eventually jailed for tax evasion. He was given a record 11-year sentence in federal prison, of which he served 8 years. He left prison suffering dementia caused by late-stage syphilis. Capone suffered through 7-8 sickly years before passing away in 1947.

35. Loser in a 1970s-’80s “war” : BETAMAX
The video standard known as VHS is more fully referred to as the Video Home System. VHS was one of many standards touted by various manufacturers in the seventies. The biggest rival to VHS was of course Betamax, but we all knew which of the two standards won the final round in that fight.

38. Literary contemporary of Addison : STEELE
Richard Steele was an Irish writer, the co-founder of the magazine “The Spectator” along with Joseph Addison. Steele also founded “The Tatler” magazine, for which he wrote 188 essays.

45. Locale painted in the Sistine Chapel : EDEN
The Sistine Chapel, in the Pope’s residence in Rome, takes its name from Pope Sixtus IV who was responsible for restoring the old Capella Magna in the 15th century. It was about a century later (1508-1512) that Michelangelo painted the ceiling of the Sistine Chapel under the patronage of Pope Julius II.

47. Eastern Europe’s Sea of ___ : AZOV
The Sea of Azov lies east of the Crimean Peninsula and is linked to the larger Black Sea via the narrow Strait of Kerch. The Sea of Azov is the shallowest sea in the world, with the depth never going above forty-six feet.

50. Printer setting: Abbr. : LTR
Our paper sizes here in North America don’t conform with the standards in the rest of the world. ISO standard sizes used elsewhere were chosen so that the ratio of width to length is usually one to the square root of two. This mathematical relationship means that when you cut a piece of paper in two each half preserves the aspect ratio of the original, which can be useful in making reduced or enlarged copies of documents. Our standard size of “letter” (8.5 x 11 inches) was determined in 1980 by the Reagan administration to be the official paper size for the US government. Prior to this, the “legal” size (8.5 x 14 inches) had been the standard, since 1921.