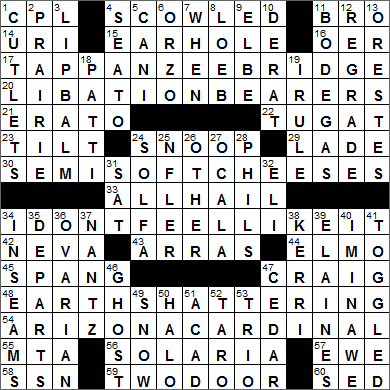 14. New England state sch. : URI
The University of Rhode Island (URI) was first chartered as an agricultural school, back in 1888. URI’s main campus today is located in the village of Kingston.

17. Span since 1955 : TAPPAN ZEE BRIDGE
The Tappan Zee Bridge is more correctly called the Governor Malcolm Wilson Tappan Zee Bridge which crosses the Hudson River in New York. The bridge opened in 1955 and is showing its age. There are plans to replace it with a new bridge due to open in 2017.

The Tappan Zee is a 10-mile stretch of the Hudson River in New York, a place where there is a widening of the waterway. The name comes from the Tappan Native American people and the Dutch word “zee” meaning “sea” or “wide expanse of water”.

20. Middle of an Aeschylus trilogy, with “The” : LIBATION BEARERS
The “Oresteia” is a trilogy of Greek plays by Aeschylus. The three titles are:

29. Get on board : LADE
The verb “lade” meaning “to load” comes from an Old English word “hladan”. Lade also used to mean “to draw water” and indeed gave us our word “ladle”. So “lade” and “ladle” are close cousins.

30. Gouda and Muenster : SEMI-SOFT CHEESES
Gouda is a cheese that originated in the Dutch city of the same name, although today Gouda is produced all over the world and very little of it comes from the Netherlands. Gouda is often smoke-cured, given it a yellowish-brown outer skin and that characteristic smoky taste.

Muenster is an American cheese, not to be confused with Munster cheese which is from the department called Vosges in the northeast of France. The American cheese is named for the German city of Münster (also Muenster) in the northwest of the country, a city that doesn’t actually have a local cheese named for it.

42. River that passes by the Hermitage : NEVA
The Neva is a very large river that spills into the Gulf of Finland at the beautiful city of St. Petersburg. The river forms an expansive delta as it reaches the Baltic Sea and the delta gives rise to numerous islands, with the number of islands further increased by a network of canals. The historic part of the city is built on these islands giving St. Petersburg a very Venetian feel. I had the privilege of visiting the city some years ago, and I can attest that it is indeed spectacular …

The Winter Palace is a magnificent building in St. Petersburg in Russia, home to the Russian tsars (and tsarinas). The Winter Palace houses the famous Hermitage Museum. I was lucky enough to visit the Palace and museum some years ago, and I have to say that I have rarely been more impressed by a historical building.

43. Wall hanging : ARRAS
A famous arras is seen in Shakespeare’s “Hamlet”. In one pivotal scene, Polonius is hiding behind a tapestry listening to an argument between Hamlet and Gertrude. Hamlet hears Polonius, mistakes his identity and stabs wildly through the cloth, killing Polonius. The name “arras”, used for such a tapestry, comes from the French town of Arras which was famous for the production of fine wall hangings.

44. Saint who is one of the Fourteen Holy Helpers : ELMO
St. Elmo is the patron saint of sailors. He lends his name to the electrostatic weather phenomenon (often seen at sea) known as St. Elmo’s fire. The “fire” is actually a plasma discharge caused by air ionizing at the end of a pointed object (like the mast of a ship), something often observed during electrical storms.

45. Squarely, informally : SPANG
“Spang” is an informal term (that’s new to me) meaning “precisely, squarely”, as in “spang in the middle of this mess”.

54. Pro athlete in a red-and-white uniform : ARIZONA CARDINAL
The Arizona Cardinals were founded in 1898 as the Chicago Cardinals. That makes the Cardinals the oldest, continuously-run professional football team in the whole country.

56. Bright spots : SOLARIA
A solarium (plural “solaria”) is a sunroom or sun lounge, a structure usually built onto the side of a house that contains a lot of glass to let in the sun.

58. It’s double-hyphenated: Abbr. : SSN
A Social Security number (SSN) is divided into three parts i.e AAA-GG-SSSS, Originally, the Area Number (AAA) was the code for the office that issued the card. Since 1973, the Area Number reflects the ZIP code from which the application was made. The GG in the SSN is the Group Number, and the SSSS in the number is the Serial Number. However, this is all moot, as since 2011 SSN’s are assigned randomly.

The most famous man with the name “Brutus” in Ancient Rome was Marcus Junius Brutus the Younger. It was this Brutus that Julius Caesar turned to when he was assassinated on the steps of the Senate. William Shakespeare immortalized Brutus by featuring him in his play, “Julius Caesar”, and giving his victim the line “Et tu, Brute?”

Down
1. Schnitzels, e.g. : CUTLETS
Schnitzel is an Austrian dish made from slices of meat that have been tenderized and thinned with a wooden mallet, and then coated in breadcrumbs and fried. The variant known as Wiener Schnitzel (i.e. Viennese schnitzel) is usually made from veal, although now that veal had fallen into disfavor due to concerns about animal rights, it is often made from pork.

4. 1950s-’70s defense acronym : SEATO
The Southeast Asia Treaty Organization (SEATO) was set up in 1954, a defense organization with the mission to block communist influence growing in Southeast Asia. The driving force behind the organization’s creation was President Eisenhower’s Secretary of State, John Dulles. The list of SEATO members included Australia, France, the Philippines, the UK and the US. The organization was never really considered effective and it fell apart in 1977 largely due to a lack of interest by the members.

6. Pasta eaten with a spoon : ORZO
Orzo is pasta that has been formed into granular shapes, much like barley. And indeed, “orzo” is the Italian word for “barley”.

7. “That’s enough,” to a server : WHEN
The server, adding freshly cracked pepper maybe, says “Say when”.

8. Banker/philanthropist Solomon : LOEB
Solomon Loeb was an American banker who emigrated from Germany when he 21 years of age. Solomon founded the bank Kuhn, Loeb & Co. with his partner Abraham Kuhn in 1867. Kuhn, Loeb & Co. merged with Lehman Brothers in 1977.

9. River into which the Vltava flows : ELBE
The River Elbe rises in the Czech Republic and travels over a thousand kilometers before emptying into the North Sea near the port of Hamburg in Germany.

The Vltava is the longest river in the Czech Republic. We might perhaps know the river as “the Moldau”, which is its German name, as we might be familiar with the symphonic poem called “The Moldau” by Bedřich Smetana.

11. Some corner shops : BODEGAS
“Bodega” is the Spanish term for a winery, or these days for a grocery store.

13. Hero of 20-Across : ORESTES
Orestes is a character appearing in Greek mythology, and is the subject of several Ancient Greek plays. In a story by Homer, Orestes kills his mother Clytemnestra. He does so in revenge as Clytemnestra had killed Agamemnon, who was her husband and father to Orestes. Agamemnon was killed by his wife for sacrificing his daughter Iphigenia in order to get favorable winds on a sea voyage. Heavy stuff …

18. Stanger a.k.a. Bravo’s “Millionaire Matchmaker” : PATTI
Patti Stanger is the host of her own reality show called “The Millionaire Matchmaker”. Stanger is a third-generation matchmaker (“shidduch” in the Jewish tradition) who spent some years as Director of Marketing for the matchmaking website Great Expectations. She used this experience to springboard into her own reality show with Bravo TV. In each episode she is seen matchmaking two millionaires.

24. Sight-singing technique : SOLFA
The solfa syllables are: do, re, mi, fa, sol, la & ti. The solfa scale was developed from a six-note ascending scale created by Guido of Arezzo in the 11th century. He used the first verse of a Latin hymn to name the syllables of the scale:

The “ut” in this scale was later changed to “do”, as “do” a more “open ended” sound, and “si” was added (the initials of “Sancte Iohannes”) to complete the seven-note scale. Later again, “si” was changed to “ti” so that each syllable began with a unique letter.

27. Onetime center for the distribution of oranges : OCALA
The city of Ocala, Florida was founded near a historic village with the same name. In the local Timucua language “Ocala” means “Big Hammock”. Back in the 1890s, Ocala was famous for its oranges, with over one third of that fruit shipped from Florida coming from the city. Also, thoroughbred horse farming in Florida started in Ocala, back in 1943. Some folks today call Ocala the “Horse Capital of the World”, but I bet that’s disputed by others …

28. 2008 World Series winners, to fans : PHILS
Philadelphia’s baseball team was founded in 1883 as the Quakers, with the name changing to the Philadelphias and Phillies not long into the team’s history. The Phillies have been based in the same city using the same team name longer than any other team in US professional sports.

32. Laura Nyro album “___ and the Thirteenth Confession” : ELI
Laura Nyro was a singer-songwriter from the Bronx, New York. Nyro had success with her own recordings, but her songs were even more successful when recorded by other big names. Two of Nyro’s compositions were “Eli’s Coming” recorded by Three Dog Night, and “Stoney End” by Barbra Streisand.

37. Sportscaster Jim : NANTZ
Jim Nantz is a sportscaster who has worked for CBS Sports since the 1990s.

38. Olympic gymnast Strug : KERRI
Kerri Strug is that plucky little gymnast who made an outstanding final vault in the 1996 Atlanta Olympics despite having an injured ankle. I think we all remember her being carried off after her vault in the arms of the US team coach Bela Karolyi.

39. Manhattan eatery referenced in Billy Joel’s “Big Shot” : ELAINE’S
Elaine’s was a bar and restaurant on the Upper East Side of Manhattan that was a regular haunt for celebrity New Yorkers until it closed its doors in 2011. Elaine’s was famous for hosting an Oscar night where the elite and famous would watch the Academy Award ceremony each year. The restaurant gets a mention in the Billy Joel song “Big Shot”, and is also featured in the Woody Allen movie “Manhattan”.

47. Ohio’s ___ Point, home of the Top Thrill Dragster and Millennium Force roller coasters : CEDAR
Cedar Point is an amusement park in Sandusky, Ohio and is the second-oldest such park in teh country that is still operating (the oldest is Lake Compounce in Bristol, Connecticut, which open in 1846). Cedar Point specializes in roller coasters.

50. Headlight? : HALO
The Greek word “halos” is the name given to the ring of light around the sun or moon, which gives us our word “halo”.

51. Part of A.M.P.A.S.: Abbr. : ACAD
The Academy of Motion Picture Arts and Sciences (AMPAS) is the organization that gives the annual Academy Awards also known as the “Oscars”. The root of the name “Oscar” is hotly debated, but what is agreed is that the award was officially named “Oscar” in 1939. The first Academy Awards were presented at a brunch in 1929 with an audience of just 29 people. The Awards ceremony is a slightly bigger event these days …

52. Arum family member : TARO
The corm of some taro plants is used to make poi, the traditional Hawaiian dish (that I think tastes horrible). When a taro plant is grown as an ornamental, it is often called Elephant Ears due to the shape of its large leaves.