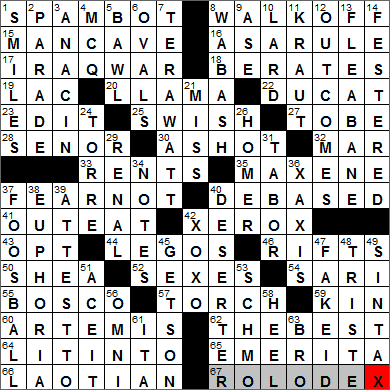 Today’s Wiki-est, Amazonian Googlies
Across
1. Web nuisance : SPAMBOT
Spambots are nasty little computer programs that send out spam emails and messages, often from fake accounts. This blog gets about 300 spam comments a day that I have to delete, almost all of which are written by spambots.

8. With 26-Down, dramatic end to a game : WALK-OFF
(26D. See 8-Across : HOMER)
In baseball, a walk-off home run is one that ends the game, a homer at the bottom of the final inning that takes the lead.

17. “The Hurt Locker” setting : IRAQ WAR
The 2008 movie “The Hurt Locker” is a disturbing drama about a US Army Explosive Ordnance Disposal (EOD) team on the front lines during the Iraq War. The film appears to be very realistic, and was filmed in Jordan just a few miles from the Iraqi border. The screenplay was written by Mark Boal, a journalist who was embedded with an EOD team in 2004. “The Hurt Locker” won six Academy Awards, including Best Director for Kathryn Bigelow, the first woman to be so honored.

22. Admission ticket : DUCAT
“Ducat” is a slang term for an item of money or for an admission ticket. The original ducat was a coin introduced by the Republic of Venice in 1284.

25. Sweet Jazz sound? : SWISH
A swish shot is a basketball shot that goes through the hoop without touching the rim or the backboard, and you can hear that “swish” as it just passes through the net, so they tell me …

The Utah Jazz professional basketball team moved to their current home in Salt Lake City in 1979. As one might guess from the name, the team originated in New Orleans, but only played there for five seasons. New Orleans was a tough place to be based because venues were hard to come by, and Mardi Gras forced the team to play on the road for a whole month.

28. Serape wearer : SENOR
“Serape” is the English pronunciation and spelling of the Spanish word “zarape”. A zarape is like a Mexican poncho, a soft woolen blanket with a hole in the middle for the head. Most serapes have colorful designs that use traditional Mayan motifs.

33. Complex data : RENTS
One might keep data such as rents paid in an apartment complex.

42. WorkCentre maker : XEROX
The WorkCentre is a line of all-in-one printer/copier/scanner and fax machine made by Xerox.

44. Construction material for several theme parks : LEGOS
There are currently six Legoland theme parks in the world, with two here in North America. One of the US parks is in Winter Haven, Florida and the other is in Carlsbad, California (which is the one that I’ve visited … a fun place).

50. Where 24-Down began his managerial career : SHEA
(24D. See 50-Across : TORRE)
Shea Stadium in Flushing Meadows, New York was named after William A. Shea, the man credited with bringing National League baseball back to the city in the form of the New York Mets. Shea Stadium was dismantled (not imploded) in 2008-2009, and the site now provides additional parking for the new stadium nearby called Citi Field.

54. Eastern wear : SARI
The item of clothing called a “sari” (also “saree”) is a strip of cloth, as one might imagine, unusual perhaps in that is unstitched along the whole of its length. The strip of cloth can range from four to nine meters long (that’s a lot of material!). The sari is usually wrapped around the waist, then draped over the shoulder leaving the midriff bare. I must say, it can be a beautiful item of clothing.

60. Orion’s hunting companion : ARTEMIS
There are many versions of the death of Orion at the hands of Artemis. Orion was a great hunter, and companion of the goddess Artemis. Some versions of the tale describe Artemis being tricked into killing Orion.

65. Professor ___ : EMERITA
Emeritus (female form “emerita”, plural “emeriti”) is a term in the title of some retired professionals, particularly those from academia. Originally an emeritus was a veteran soldier who had served his time. The term comes from the Latin verb “emerere” meaning to complete one’s service.

66. Like some Hmong : LAOTIAN
The Hmong people are an ethnic group from the mountains of China, Vietnam, Laos and Thailand.

67. Solution for storing contacts? : ROLODEX
The name Rolodex is short for “rolling index”, and applies to a device that was invented back in 1956. Even in today’s world that is run by computers, Rolodexes are still popular.

Down
3. Relief provider since 1916 : ANACIN
Anacin is a pain reliever, with aspirin and caffeine as active ingredients.

4. 1974 John Wayne title role : MCQ
“McQ” is a 1974 crime thriller set in Seattle, Washington. “McQ” was somewhat of a consolation prize for the star John Wayne, as a few years earlier he was passed over for the title role in “Dirty Harry”. That role of course went to Clint Eastwood.

7. Lightning strike measure : TERAWATT
A terawatt is a unit of power, a lot of power. One terawatt is equal to 1,000,000 megawatts.

8. River between two Midwestern states : WABASH
The Wabash River is the largest northern tributary of the Ohio River. The Wabash is the state river of Indiana, and forms much of the border between the Indiana and Illinois. The river takes its name from the French “Ouabache”, a word that French traders adopted from a Miami Indian word meaning “it shines white”.

9. Malt finisher? : -ASE
As one might guess from the name, maltase is an enzyme that acts on the sugar maltose. Maltase breaks the disaccharide into its two constituent glucose molecules.

11. Reuben ingredient : KRAUT
“Sauerkraut” translates from German as “sour herb” or “sour cabbage”. During WWI, sauerkraut producers changes its name in order to distance their product from the enemy. They called it “Liberty cabbage”.

There are conflicting stories about the origin of the Reuben sandwich. One is that it was invented around 1914 by Arnold Reuben, an immigrant from Germany who owned Reuben’s Deli in New York.

12. Denouements : OUTCOMES
The “denouement” is the final resolution of a dramatic plot. The term is French, and derives from the Old French for “untying”, an “unknotting” as it were.

13. Plant said to repel bugs : FLEABANE
Fleabanes are perennial flowering plants in the daisy family. Many dog owners plant fleabane daisies in their yards to repel fleas. Fleabanes are also said to deter ticks, gnats, flies and mosquitoes. Some people rub the leaves of the plant on their skin or on their pet’s fur to achieve the desired effect.

31. Pipe accompanier : TABOR
A tabor is a portable snare drum that is played with one hand. The tabor is usually suspended by a strap from one arm, with the other hand free to beat the drum. It is often played as an accompaniment for a fife or other small flutes. The word “tabor” comes from “tabwrdd”, the Welsh word for “drum”.

37. Recreation hall staple : FOOSBALL
The modern game of Table Football was invented in 1921 in the UK. We tend to call the game “Foosball” in the US, which presumably is derived from the German “Fussball” meaning “football”.

42. Valentine letters : XOXO
In the sequence XOX, I think the X represents a kiss, and the O a hug. Hugs and kisses …

53. Boob : SCHMO
“Schmo” (also “shmo”) is American slang for a dull or boring person, from the Yiddish word “shmok”.

56. Wyndham alternative : OMNI
Omni Hotels & Resorts is headquartered in Irvine, California and has properties in the US, Canada and Mexico.

58. Elevator at the bottom? : HEEL
A shoe might include an elevator in the heel, something that creates the impression that the wearer is taller.