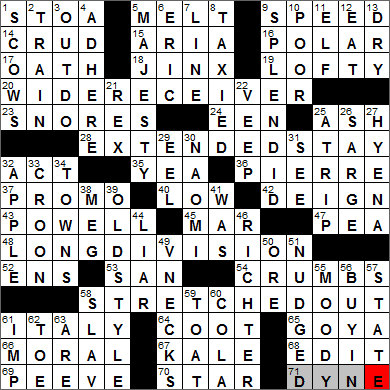 CROSSWORD SETTER: Tom McCoy
THEME: Big Clue … today’s themed answers are common phrases that include an adjective meaning “with extra space”. The letters in the clue have “extra space” between the letters, to point us in the direction of the adjective, and the wording of the clue points to the noun in the answer:

Today’s Wiki-est, Amazonian Googlies
Across
1. Covered Greek walkway : STOA
A stoa was a covered walkway in Ancient Greece. A stoa usually consisted of columns lining the side of a building or buildings, with another row of columns defining the other side of the walkway. The columns supported a roof. Often stoae would surround marketplaces in large cities.

16. ___ vortex (winter weather phenomenon) : POLAR
The polar vortices are two persistent cyclones that are found over the Earth’s poles, one over the Arctic and one over the Antarctic. It is within the southern polar vortex that we now have a hole in the ozone layer, but there is also depletion of ozone taking place in the northern polar vortex.

18. Curse : JINX
A jinx is a charm or a spell, and the word “jinx” comes from an older word “jyng” from the 17th-century. A “jyng” was another word for the wryneck, a type of bird much used in witchcraft.

36. South Dakota’s capital : PIERRE
Here’s an old chestnut of a trivia question for you … what’s the only state capital in the Union in which the name of the capital and the name of its state share no common letters? You guessed it … Pierre, South Dakota …

43. Former secretary of state Colin : POWELL
Colin Powell was the first African American to serve as US Secretary of State. Earlier in his career, Powell had been a four-star general in the US Army, as well as Chairman of the Joint Chiefs of Staff during the Gulf War. Even though Colin Powell has retired from public service, he is one of the most noted moderate Republicans, often advocating support for centrist and liberal causes.

47. Split ___ soup : PEA
When peas are dried, the skin can be removed and the seed naturally “splits” into two pieces called cotyledons. These cotyledons would have formed the first two leaves of the pea plant had it been allowed to germinate.

52. Nav. rank : ENS
Ensign is (usually) the most junior rank of commissioned officer in the armed forces. The name comes from the tradition that the junior officer would be given the task of carrying the ensign flag.

53. ___ Francisco : SAN
San Francisco is the second-most densely populated city in the US, after New York. That said, the City by the Bay is only the fourth-most populous in California, after Los Angeles, San Diego and San Jose. San Francisco was founded by Spanish colonists on 29 June 1776, just a few days before the United States declared independence from Britain.

54. Trail for Hansel and Gretel : CRUMBS
“Hansel and Gretel” is a Germanic fairy tale found in the collection of the Brothers Grimm. It tells of two siblings, Hansel and Gretel, the children of a woodcutter. The youngsters are abandoned in a forest at the behest of an evil stepmother. Clever Hansel hears of the plan and leaves a trail of pebbles so that he and his sister can find their way home, which they do. But the children are abandoned again and this time leave a trail of breadcrumbs. Unfortunately, the crumbs are eaten by birds and so the children do indeed become lost. But eventually they do all live happily ever after …

61. Rome’s home : ITALY
Ancient Rome went through three distinct periods. From 753 to 509 BC, Rome was a kingdom, founded by the legendary Romulus. The Roman Republic lasted from 509 to 27 BC. The Republic started with the overthrow of the last monarch, Lucius Tarquinius Superbus, and replacement by two elected consuls who were advised by a senate. The Republic evolved over time, but came to an end when Octavian expanded his power and declared himself “First Citizen”, and effectively became Rome’s first Emperor and took the name Caesar Augustus. The Western Roman Empire collapsed in the 5th century. The Eastern Roman Empire survived as the Byzantine Empire that was centered on Constantinople.

64. Codger : COOT
Geezer, codger and coot are all not-so-nice terms for an old man.

65. “The Naked Maja” artist : GOYA
Francisco Goya was a Spanish painter, often called the last of the Old Masters and the first of the moderns. Two of Goya’s most famous works are “The Nude Maja” and “The Clothed Maja”.

66. End of an Aesop fable : MORAL
Aesop is remembered today for his famous fables. Aesop lived in Ancient Greece, probably around the sixth century BC. Supposedly he was born a slave, somehow became a free man, but then met with a sorry end. Aesop was sent to the city of Delphi on a diplomatic mission but instead insulted the Delphians. He was tried on a trumped-up charge of stealing from a temple, sentenced to death and was thrown off a cliff.

71. Unit of force : DYNE
An erg is a unit of energy or mechanical work. “Erg” comes from the Greek word “ergon” meaning “work”. A dyne is a unit of force. The name “dyne” comes from the Greek “dynamis” meaning “power, force”. Ergs and dynes are related to each other in that one erg is the amount of energy needed to move a force of one dyne over a distance of one centimeter.

Down
1. Garbage boats : SCOWS
A scow is a flat-bottomed boat with squared-off ends that’s often used for transportation, usually pushed or pulled by a barge. Often a scow can be seen carrying junk or garbage.

2. Amtrak service : TRAIN
Amtrak is the name used commercially by the National Railroad Passenger Corporation. “Amtrak” comes from a melding of the words “America” and “track”.

6. Singer Clapton : ERIC
Can you believe that the great Eric Clapton only had one chart-topper in the US? In 1974, Clapton released a cover version of the Bob Marley classic “I Shot the Sheriff” and ended up selling more copies of that song than Bob Marley did himself.

8. Went along the tarmac : TAXIED
An airplane taxis on the tarmac at an airport.

“Tarmac” and “macadam” is of course short for “tarmacadam”. In the 1800s, Scotsman John Loudon McAdam developed a style of road known as “macadam”. Macadam had a top-layer of crushed stone and gravel laid over larger stones. The macadam also had a convex cross-section so that water tended to drain to the sides. In 1901, a significant improvement was made by English engineer Edgar Purnell Hooley who introduced tar into the macadam, improving the resistance to water damage and practically eliminating dust. The “tar-penetration macadam” is the basis of what we now call Tarmac.

11. Keebler figure : ELF
The famous Keebler Elves have been appearing in ads for Keebler since 1968. The original head of the elves was J. J. Keebler, but he was toppled from power by Ernest J. Keebler in 1970.

21. “Oedipus ___” : REX
“Oedipus Rex” (also “Oedipus the King”) is a tragedy penned by the Ancient Greek playwright Sophocles. The play tells the story of Oedipus, a man who becomes king of Thebes. Famously, Oedipus was destined from birth to murder his father and marry his mother.

26. Beetle’s boss, in the comics : SARGE
Sgt. Snorkel (“Sarge”) is Beetle Bailey’s nemesis in the cartoon strip that bears his name. Snorkel has a dog called Otto that he dresses up to look just like himself. Otto started off as a regular dog, but artist Mort Walker decide to draw him more like his owner, and soon Otto became a big hit.

27. “Laughing” animal : HYENA
The spotted hyena of Sub-Saharan Africa is also known as the laughing hyena because of the sound it oftens makes, which resembles maniacal laughter.

29. Fish that can give you a shock : EEL
Electrophorus electricus is the biological name for the electric eel. Despite its name, the electric “eel” isn’t an eel at all, but rather what is called a knifefish, a fish with an elongated body that is related to the catfish. The electric eel has three pairs of organs along its abdomen, each capable of generating an electric discharge. The shock can go as high as 500 volts with 1 ampere of current (that’s 500 watts), and that could perhaps kill a human.

30. Actress Watts : NAOMI
Naomi Watts was born in the UK and moved to Australia when she was 14 years of age. It was in Australia that Watts got her break in television and movies. Probably her most acclaimed role was in the 2003 film “21 Grams” with Sean Penn and Benicio del Toro. Watts is best friends with fellow Australian actress Nicole Kidman.

33. Sing like Bing Crosby : CROON
The singer Bing Crosby was a great lover of the game of golf. Crosby had just finished up 18 holes on a course in Spain in 1977 when he suffered a massive heart attack on the final green. Crosby’s last words were “That was a great game of golf, fellas.”

Perhaps the most memorable scene in the wonderful film “When Harry Met Sally…” is set in a Manhattan deli. Sally (Meg Ryan) claims that men cannot recognize when a woman is faking an orgasm. Harry (Billy Crystal) disagrees, so Sally proves her point over her sandwich, screaming out a lot of “yeses!” Director Rob Reiner tells a story about a test screening of the movie that he attended. He recalls that all the women in the audience were rolling around the aisles, while the men weren’t even cracking a smile. And by the way, the actress who then utters the line in the film “I’ll have what’s she’s having”, that is Estelle Roberts, the mother of director Rob Reiner.

46. ___ scale (earthquake measurer) : RICHTER
The Richter scale was developed in 1935, by Charles Richter at the California Institute of Technology. Maybe that’s why we still use it out here, while the rest of the world has moved to the “moment magnitude scale”. Reports of earthquake magnitude are usually given using the “moment magnitude scale”, but the media don’t bother to specify which scale is being quoted.

57. Misery or Missouri : STATE
A state of misery, or the state of Missouri.

58. Serb or Pole : SLAV
The Slavic peoples are in the majority in communities covering over half of Europe. This large ethnic group is traditionally broken down into three smaller groups:

60. Pepsi-___ : COLA
The Pepsi-Cola formulation was developed by one Caleb Bradham who made the drink at home and sold it as “Brad’s Drink”. Bradham’s aim was to provide a drink that was pleasant to taste, that would aid digestion and boost energy. Included in the formula were pepsin (a digestive enzyme) and kola nuts. These two ingredients inspired the brand name we use today: Pepsi-Cola.