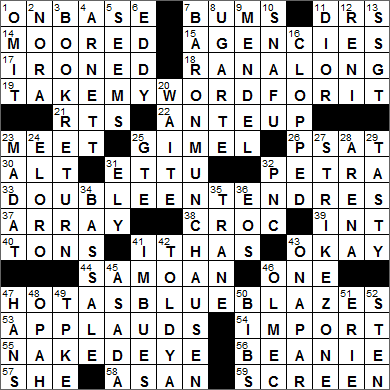 25. Dreidel letter : GIMEL
A dreidel is a spinning top with four sides, often associated with the Jewish holiday of Hanukkah. Each of the four sides on a dreidel bears a letter from the Hebrew alphabet (nun, gimel, hei and shin). The four letters are the initials of the Hebrew phrase “Nes Gadol Hayah Sham” meaning “a great miracle happened there”. According to tradition, children would be taught Torah while hiding in caves away from the Greeks. When Greek soldiers approached, the children would hide their torah scrolls and play with their dreidels instead.

31. Surprising words from Shakespeare? : ET TU
It was Shakespeare who popularized the words “Et tu, Brute?” (And you, Brutus?), in his play “Julius Caesar”, although the phrase had been around long before he penned his drama. It’s not known what Julius Caesar actually said in real life just before he was assassinated on the steps of the Senate in Rome.

32. Ruined “rose-red city” of Jordan : PETRA
The archaeological city of Petra in Jordan sounds like a fabulous sight, and is known for its beautiful buildings that have been carved out of the natural rock. Petra is Jordan’s most visited tourist attraction.

33. Much of Mae West’s wit : DOUBLE ENTENDRES
Comic actress Mae West can be quoted so easily, as she had so many great lines delivered so well. Here are a few:

44. Language in which “talofa” means “hello” : SAMOAN
The official name for the South Pacific country formerly known as Western Samoa is the Independent State of Samoa. “Samoa” is the western part of the island group, with American Samoa lying to the southeast. The whole group of islands used to be known as Navigators Island, a name given by European explorers in recognition of the seafaring skills of the native Samoans.

47. Sizzling : HOT AS BLUE BLAZES
The idiom “hot as blue blazes” is a reference to the electric blue flame seen when a fire is extremely hot.

54. Ferrari or Lamborghini : IMPORT
Enzo Ferrari was an Italian race car driver, and founder of the Ferrari car manufacturing company. Ferrari died in 1988, and in 2003 the company named the Enzo Ferrari model after its founder.

56. Bit of “Archie” attire : BEANIE
A beanie is a knitted, close-fitting hat with no brim. The name probably comes from the slang term “bean” meaning “head”.

Archie Andrews was the main character in a comic book series introduced in 1941 by Archie Comics. Archie was such a successful character that he went on to appear in a radio series, a syndicated comic strip and two television cartoon shows. Famously, Archie got himself in a love triangle with Betty Cooper, the girl next door, and Veronica Lodge, the only child of the richest man in town.

57. Elle’s English-language counterpart : SHE
“Elle” is the French word for “she”.

Down
2. ___ Barnacle, James Joyce’s wife and muse : NORA
Nora Barnacle (what a name!) was the wife of Irish author James Joyce. Nora had her first romantic liaison with Joyce on 16 June 1904, a date that Joyce chose as the setting for his “one-day” novel “Ulysses”. June 16th is celebrated in Ireland, and indeed around the world, as Bloomsday.

4. Will of “30 Rock” : ARNETT
Will Arnett is a Canadian actor who his currently in NBC’s sitcom “Up All Night”, starring alongside Christina Applegate. Arnett got his big break in the Fox show “Arrested Development”. Arnett’s father was the president and CEO of Molson Breweries, and Arnett’s wife is Amy Poehler, star of “Parks and Recreation”.

7. Storied storyteller : BARON MUNCHAUSEN
Baron Münchhausen ex-military officer with the Russian forces in the 18th century. He had a reputation for telling some very outlandish tales of his exploits. Such was his legacy as a storyteller that the psychiatric disorder called Münchhausen syndrome was named after him. Münchausen syndrome describes a psychological disorder in which the patient reports imaginary symptoms in order to get medical attention.

8. “Casablanca” crook : UGARTE
Signor Ugarte is a wonderful character in the classic film “Casablanca”. Ugarte is played by Peter Lorre, and is the man who has possession of the crucial letters of transit that were obtained by murdering two German couriers.

9. Pea-brained researcher? : MENDEL
Gregor Mendel was an Austrian monk, and a scientist who achieved fame after his passing when his work in the field of genetics was rediscovered. The conclusions he drew from his studies of garden peas led to him earning the moniker “father of modern genetics”.

10. Real mess : SNAFU
SNAFU is an acronym standing for Situation Normal: All Fouled Up (well, that’s the “polite” version!). As you might imagine, the term developed in the US Army, during WWII.

11. Gucci contemporary : DIOR
Christian Dior was a French fashion designer. As WWII approached, Dior was called up by the French military, imposing a temporary halt to his career in fashion. He left the army in 1942 and for the duration of the war designed clothes for wives of Nazi officers and French collaborators. After the war his designs became so popular that he helped re-establish Paris as the fashion center of the world.

Gucci was founded in Rome in 1921, by Guccio Gucci. Guccio’s son Aldo took over the company after his father’s death in 1953. It was Aldo who established the international presence for the brand and opened the company’s first overseas store, in New York City.

12. “Crucifixion of St. Peter” painter : RENI
Guido Reni was an Italian painter from Bologna who was active in the first half of the 17th century. Reni painted in the high-Baroque style and is noted for his works on display in the churches of Bologna, Rome and Naples.

20. Singer John with the 1984 #1 hit “Missing You” : WAITE
John Waite is a singer-songwriter from England. Waite most successful release is the 1841 number-one hit “Missing You”. Waite lived from many years in New York City and now lives in Santa Monica, California.

24. Ecuadorean province named for its gold production : EL ORO
El Oro is a coastal province in the south of Ecuador. El Oro (meaning “The Gold”) takes its name from the gold production industry. The province is also one of the biggest banana exporters in the world.

25. Bygone telecom : GTE
GTE was a rival to AT&T, the largest of the independent competitors to the Bell System. GTE merged with Bell Atlantic in 2000 to form the company that we know today as Verizon.

27. What half of a battery is next to : STRIKE ZONE
In the baseball word, the team made up of the pitcher and the catcher is known colloquially as the “battery”.

31. City on the Ouse : ELY
Ely is a city in the county of Cambridgeshire in England, and home to the beautiful Ely Cathedral.
There is a Gothic door on the north face of the cathedral that was designed by Sir Christopher Wren, the man famous as the architect of St. Paul’s Cathedral in London. Christopher Wren had a personal link to the church, as his uncle was the Bishop of Ely.

32. ___ Park (Pirates’ stadium) : PNC
PNC Park is the home to the Pittsburgh Pirates baseball team. The park is sponsored by PNC Financial Services, the sixth largest bank in the US, and founded and based in Pittsburgh.

34. Its bottles feature red triangles : BASS ALE
The red triangle on the label of a bottle of Bass Ale was registered in 1875 and is UK Registered Trade Mark (TM) No: 00001, the first trade mark issued in the world.

35. Big name in heating and air-conditioning : TRANE
The heating, ventilating and air conditioning (HVAC) company called Trane was formed in 1913 by father and son James and Reuben Trane. James was a Norwegian immigrant, and Reuben earned his mechanical engineering degree at the University of Wisconsin.

36. Hyperion’s daughter : EOS
In Greek mythology, Eos is the goddess of the dawn who lived at the edge of the ocean. Eos would wake each morning to welcome her brother Helios the sun. The Roman equivalent of Eos is Aurora.

Hyperion was one of the Titan deities, and was the personification of the Earth.

46. Like some ancient Mexicans : OLMEC
The Olmec were an ancient civilization that lived in the lowlands of south-central Mexico from about 1500 BC to about 400 BC.

47. Weapons inspector Blix : HANS
Hans Blix is a Swedish diplomat who was front and center in the news in 2002/2003 when he headed up the UN group responsible for seeking out weapons of mass destruction in Iraq.

48. Hawaiian menu fish : OPAH
Opah is the more correct name for the fish also known as the sunfish, moonfish or Jerusalem haddock. I’ve seen one in the Monterrey Aquarium. It is huge …

49. No place for a free ride: Abbr. : TPKE
Back in the 15th century a “turnpike” was a defensive barrier across a road. By the 17th century the term was used for a barrier that stopped travellers until a toll was paid. By the 18th century a turnpike was the name given to a road with a toll.

51. It’s at one end of I-79 : ERIE
Erie is a city in the very north of Pennsylvania, right on the southern shore of Lake Erie. The city takes its name from the Erie Native American tribe that resided in the area.