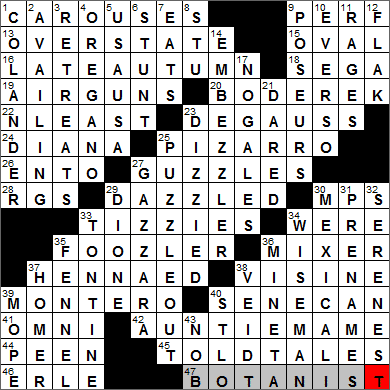 CROSSWORD SETTER: David Steinberg
THEME: ZZZ … we have a mini-theme today, with a lot of letters Z appearing in answers in the center of the grid. And, I think I can see a sort of Z-shape in the grid pattern, but that may just be me …

Today’s Wiki-est, Amazonian Googlies
Across
9. Philatelist’s abbr. : PERF
In the world of stamp collecting, perforations are the small holes punched between individual stamps in a page so that they can be separated.

16. When Winesap apples ripen : LATE AUTUMN
A winesap is a small and tart apple, often used for making cider.

18. Genesis source : SEGA
The Genesis is a video game console sold in the US by the Japanese company Sega. In the rest of the world, the console is sold as the Mega Drive, as Sega couldn’t get the rights to the Mega Drive name in the US.

19. Weapons in Olympic shooting events : AIR GUNS
The 10 Metre Air Pistol is a shooting event in the Summer Olympic Games, appearing for the first time in 1988. To be honest, I’ve never seen the event during the Olympics, but I did see some guys practicing with air pistols (and a lot of computer equipment) on a tour of the US Olympic Training Facility in Colorado Springs.

20. Actress in a best-selling 1979 swimsuit poster : BO DEREK
Bo Derek’s most famous role was in the comedy from 1979 titled “10”, in which she starred opposite Dudley Moore.

22. Braves’ division, briefly : NL EAST
The Atlanta Braves baseball team has announced that it will move from Turner Field in Atlanta to a new park to be built in Cobb County, Georgia, which is just northwest of Atlanta.

23. Make less attractive? : DEGAUSS
Degaussing is the process of vastly reducing a magnetic field that may be present in metal object. The term comes from the unit of magnetism called a Gauss, which in turn is named for the German mathematician Carl Friedrich Gauss. The process was developed during WWII to reduce the magnetic fields on naval vessels to reduce their vulnerability to magnetic mines.

24. Mythical hunter : DIANA
Diana was the Roman goddess of the hunt, the moon and birthing. The Greek equivalent of Diana was the goddess Artemis. According to Roman mythology, Diana was the twin sister of Apollo, and the daughter of Jupiter and Latona.

25. Notable buried at the Cathedral of Lima : PIZARRO
Lima is the capital city of Peru. Lima was founded in 1535 by the Spanish conquistador Francisco Pizarro, who named it “la Ciudad de los Reyes” (the City of Kings). He chose this name because the decision to found the city was made on January 6th, the feast of the Epiphany that commemorates the visit of the three kings to Jesus in Bethlehem.

35. Bungler : FOOZLER
“To foozle” something is to bingle it, especially a shot at golf. The term derives from the German “fuseln” meaning “to bungle”.

37. Tattooed temporarily : HENNAED
Henna has been used for centuries as a dye, not just for leather and wool, but also for the hair and skin. In modern days, henna is also used for temporary tattoos.

38. Red-eye remedy : VISINE
Visine is a brand of eye drops made by Johnson & Johnson, advertised to “get the red out”. The red in the eye is reduced because Visine contains tetrahydrozoline hydrochloride, a vasoconstrictor. The blood vessels creating the redness constrict when Visine is applied, and you “get the red out” as the blood is “squeezed” away from the surface of the eye.

39. Mitsubishi model whose name means “huntsman” in Spanish : MONTERO
The Mitsubishi Montero is a sports utility vehicle that is marketed under the name Pajero in some parts of the world and the Shogun in the British Isles. We used to own a Pajero when we lived in the Philippines. We had no idea that the “pajero” is an offensive term in Spanish …

40. Describing an ancient tragedian : SENECAN
Seneca the Younger was a playwright as well as a tutor and advisor to the Emperor Nero of Ancient Rome. Although maybe innocent, Seneca was forced to commit suicide by Nero as it was alleged that Seneca participated in a plot to kill the emperor. To kill himself, Seneca cut into a number of veins in order to bleed to death.

42. Rosalind Russell title role : AUNTIE MAME
“Auntie Mame” is a 1955 novel by Patrick Dennis that was adapted for the Broadway stage in 1958 with Rosalind Russell playing the title role. There is also a 1958 movie adaption that also stars Russell.

44. Ball ___ : PEEN
The peen of a hammer is on the head, and is the side of the head that is opposite the striking surface. Often the peen is in the shape of a hemisphere (as in a ball-peen hammer), but usually it is shaped like a claw (mainly for removing nails).

46. Filmmaker ___ C. Kenton : ERLE
Erle Kenton was a film director from Norbro, Montana. Kenton directed 131 films between 1916 and 1957, including “The Ghost of Frankenstein”, “House of Frankenstein” and “House of Dracula”.

Down
1. It doesn’t hold water : COLANDER
A colander is a bowl-shaped utensil with holes in it that is used for draining liquid from food. The term “colander” comes from the Latin word “colum” meaning “sieve”.

3. Camp David and others : RETREATS
Camp David is the very lovely country retreat used by the US President and family. Technically, Camp David belongs to the US Navy and is known as Naval Support Facility Thurmont. The installation was originally built between 1935 and 1938 as a retreat for government agents and their families. President Franklin D. Roosevelt converted it to a presidential retreat in 1942, naming it Shangri-La. When President Eisenhower was in office he renamed Shangri-La to Camp David in honor of his father and grandson, both of whom were called David.

4. Purple-flowered perennial : OREGANO
Marjoram is a fragrant herb that is native to the Mediterranean area. The related species of oregano is sometimes known as wild marjoram.

8. World Series of Poker champion ___ Ungar : STU
Many followers of the game believe that Stu Ungar was the best ever player of Texas hold ’em. Ungar won about $30 million playing cards during his life, yet he died penniless. He was found dead in a Las Vegas motel room in 1998 having passed away from heart failure at 45 years of age, brought on by years of drug abuse.

11. Fulminates : RAGES
To “fulminate” is to explode or detonate, perhaps in rage. It’s a lovely word derived from the Latin “fulminare” meaning “to hurl lightning”.

12. Kind of jacket : FLAK
“Flak” was originally an acronym from the German term for an aircraft defense cannon (FLiegerAbwehrKanone). Flak then became used in English as a general term for antiaircraft fire, and ultimately a term for verbal criticism as in “to take flak”.

17. Arizona city across the border from a city of Sonora with the same name : NOGALES
Nogales (properly called “Heroica Nogales”) is a city in the Mexican State of Sonora. Nogales lies right on the Mexico-US border, opposite the city of Nogales, Arizona.

21. Belled the cat : DARED
The fable called“Belling the Cat” dates back to the Middle Ages although it is often attributed incorrectly to Aesop. The story is about a group of mice that plot to neutralize the power of a dangerous cat by placing a bell around its neck, to sound a warning as it approaches. The moral of the story is that no matter how good an idea it is, it has to be practical. One of the mice had to be able to “bell the cat”, place the bell around its neck. The idiom “belling the cat” has come to mean “agreeing to perform an impossible task”.

27. Ben of “Run for Your Life” : GAZZARA
The actor Ben Gazzara had a long and distinguished career, but I remember him best from his starring role in the miniseries “QB VII”, an adaptation of the Leon Uris novel. I just read that Gazzara had a love affair with iconic actress Audrey Hepburn. Now I associate him with something else memorable …

29. Moon of Saturn : DIONE
Dione is a moon of Saturn, discovered in 1684 by Cassini. Originally Cassini named the four satellites of Saturn that he discovered “Sidera Lodoicea” (the stars of Louis). In so doing he was honoring King Louis XIV of France. These “stars of Louis” were individually named after Greek gods in 1847.

30. Latin America’s northernmost city : MEXICALI
Mexicali is a Mexican city in the state of Baja that lies on the US border, adjacent to Calexico, California. Mexicali is the most northerly city in Latin America.

33. Life insurance plan : TONTINE
A “tontine” is an investment plan with an element of “luck”. Each investor pays in an agreed sum, for which he or she receives an annuity. The value of that annuity increases as a participant in the plan passes away, as the deceased member’s shares devolve to the other participants. The first tontine was established in 1653 in France by Lorenzo de Tonti, after whom the scheme is named.

34. Member of a biblical trio : WISE MAN
“Magi” is the plural of the Latin word “magus”, a term applied to someone who was able to read the stars. Hence, magi is commonly used with reference to the “wise men from the East” who followed the star and visited Jesus soon after he was born.

35. Kitchen bulb? : FENNEL
Fennel is a hardy perennial plant species in the celery family that is used as a herb. Personally, I can’t stand fennel …

36. Democrat in the Bush cabinet : MINETA
Norman Mineta is a democrat who served as Secretary of Transportation in the George W. Bush administration. Mineta served for over five in the post, resigning in 2006, making him the longest serving Transportation Secretary ever. Mineta was born to Japanese immigrant parents and spent some of his childhood years with his family in an internment camp in Wyoming during WWII.

38. “Casablanca” actor Conrad : VEIDT
Conrad Veidt was an actor from Germany who left his homeland in 1933 after the Nazis came to power, along with his new Jewish wife. After several years in the UK, Veidt emigrated to the US where he settled in Hollywood. He is best remembered for playing Major Heinrich Strasser in “Casablanca”.

39. Emulate Eeyore : MOPE
Eeyore is the donkey character in A. A. Milne’s “Winnie-the-Pooh”. Eeyore is very lovable, but has a gloomy and pessimistic outlook on life.

40. Capital of France’s Manche department : ST LO
Saint-Lô is a town in Normandy that was occupied by Germany in 1940. Saint-Lo stood at a strategic crossroads and so there was intense fighting there during the Normandy invasion of 1944. After a prolonged bombardment, very little of the town was left standing.