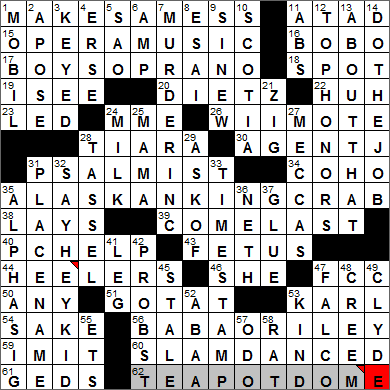 Today’s Wiki-est, Amazonian Googlies
Across
11. Not much : A TAD
Back in the 1800s “tad” was used to describe a young child, and this morphed into our usage of “small amount” in the early 1900s. The original use of “tad” for a child is very likely a shortened version of “tadpole”.

16. Film featuring Peter Sellers as a matador, with “The” : BOBO
“The Bobo” is a 1967 comedy starring Peter Sellers an aspiring singing matador. Actually, Sellers covers himself in blue dye and calls himself the “Blue Matador”. Co-starring in the film is the Swedish actress Britt Ekland, who was married to Sellers at the time.

18. Gym request : SPOT
Fellow weightlifters might “spot” each other, helping the person lifting take on more weight than would normally be possible.

26. Hand-held game device : WIIMOTE
“Wiimote” is an alternative name for the Wii Remote, the controller for the Nintendo Wii gaming console.

30. 1997 role for Will Smith : AGENT J
“Men in black” are said to have appeared in the past whenever there have been reports of UFO sightings. Supposedly, these men are government agents whose job it is to suppress reports of alien landings. The conspiracy theorists got their day in the movies with the release of a pretty good sci-fi comedy in 1997 called “Men in Black”, starring Will Smith (as Agent J) and Tommy Lee Jones (as Agent K).

31. David, e.g. : PSALMIST
The Greek word “psalmoi” originally meant “songs sung to a harp”, and gave us the word “psalms”.

34. Fish also known as a blue jack : COHO
The Coho salmon is dark blue with silver along the side of its body, but only during the phase of its life while it is in the ocean. When spawning and heading up into a freshwater river, the Coho has bright red sides.

40. Geek Squad service : PC HELP
Best Buy is a retailer specializing in the supply of consumer electronics. Best Buy services include the famous “Geek Squad”, a band of technical experts that will help solve your computer and other consumer electronic problems.

43. Internal development? : FETUS
The word “fetus”, used for an unborn young animal, comes from Latin as one might expect. “Fetus” is the Latin word for the act of hatching or bringing forth a young animal or child. The mistaken spelling “foetus” is seen quite a lot, but there’s no historical basis for adding that “o”.

44. Many party hacks : HEELERS
A “ward heeler” is a political operative who works locally in a ward to get out the vote for his or her party. Back in the early 1900s, ward heelers were viewed as corrupt characters who collected and doled out money to achieve their ends. The term “heeler” was coined back then as these operatives were seen as following at the heels of the political bosses.

46. Word in the titles of six songs by the Beatles : SHE
Six Beatles song titles feature the word “she”, and they are:

47. TV monitor, for short : FCC
TV broadcasting is monitored by the Federal Communications Commission. The FCC has been around since 1934, when it replaced the Federal Radio Commission.

53. Sociologist Mannheim : KARL
Karl Mannheim (born Károly Mannheim) was a sociologist who was born and educated in Hungary, did his most productive work in Germany, and then fled the Nazis to finish his career in Britain.

54. Teriyaki go-with : SAKE
We refer to the Japanese alcoholic beverage made from rice as “sake”. We’ve gotten things a bit mixed up in the West. “Sake” is actually the word that the Japanese use for all alcoholic drinks. What we know as sake, we sometimes refer to as “rice wine”. It is indeed made from rice, but it is a brewed rather than fermented and so is more like a beer than a wine.

Teriyaki is a Japanese technique of cooking in which the foods are grilled in a sweet soy sauce marinade. The marinade sometimes includes ginger.

56. 1971 song that was the “CSI: NY” theme : BABA O’RILEY
The song by the Who that is commonly called “Teenage Wasteland” actually has the title “Baba O’Riley”. “Baba O’Riley” is used as the theme song for the television show “CSI: New York”.

60. Performed hits at a concert? : SLAMDANCED
Slam dancing is a punk rock tradition in which groups of dancers flail about and slam into each one and another. Sort of like my foxtrot, I am told …

61. Some home-schoolers get them, briefly : GEDS
The General Educational Development (GED) tests are a battery of five tests designed to demonstrate that a student has the academic skills of someone who has graduated from an American or Canadian high school.

62. 1920s scandal xtoday: TEAPOT DOME
Albert B. Fall was Secretary of the Interior in the administration of President Warren G. Harding. Fall was convicted of accepting bribes from oil companies and leasing US Navy petroleum reserves at below the going rate. . Those reserves were held at Teapot Dome, Wyoming so the affair was labeled “the Teapot Dome scandal”. The Teapot Dome scandal was known as the most sensational scandal in American politics, until it was eclipsed by the Watergate scandal of the Nixon administration.

Down
1. Brand paired with On the Run convenience stores : MOBIL
Mobil was founded as part of the the breakup of Standard Oil in 1911. The company was originally called Socony (Standard Oil Company of New York). Socony merged with Magnolia Petroleum Company in the thirties and adopted Magnolia’s Pegasus emblem, and it has been used ever since. Mobil merged with Exxon in 1999 but the Mobil brand and Pegasus are alive and well.

“Trousers” are pants, the garment covering the lower body and each leg separately. Ultimately, the word “trousers” evolved from the Erse word “triubhas” that described close-fitting shorts. Back in the 1600s there was a colorful saying:

5. Common word on a Portuguese map : SAO
“São” is a word used in Portuguese that translates as “saint”.

6. Tour tote : AMP
An electric guitar, for example, needs an amplifier (amp) to take the weak signal created by the vibration of the strings and turn it into a signal powerful enough for a loudspeaker.

7. Organized crime enforcers of the 1930s-’40s : MURDER, INC
“Murder, Inc” was the name given by the media to the “enforcers” of organized crime groups in the thirties through the forties.

8. Morales of film : ESAI
Esai Morales is best known for his role in the 1987 movie “La Bamba”, which depicted the life of Ritchie Valens and his half-brother Bob Morales (played by Esai).

10. Burns’s land, to Burns : SCOTIA
“Scotia” has been the Latin word for “Scotland” since the Middle Ages, and is sometimes used in poetry as the name for the country. Paradoxically, the Ancient Romans used the name “Scotia” for the island of Ireland. The meaning mutated over the centuries.

21. Slalom path part : ZIG
Slalom is an anglicized version of the Norwegian word “slalam” that translates as “skiing race”.

27. Large magnets? : MECCAS
We’ve been using “mecca” to mean “a place one holds sacred” since the 1850s. The term derives from the sacred city of Islam, the birthplace of Muhammad.

32. Follower of the Sultan of Swat in career homers : SAY HEY KID
Willie Mays’ nickname was the “Say Hey Kid”, although his friends and teammates were more likely to refer to him as “Buck”. When Mays was inducted into the Baseball Hall of Fame, he was asked who was the best player he’d seen in the game. He replied, “I don’t mean to be bashful, but I was.”

35. Warren Buffett’s college fraternity, informally : ALPHA SIG
The Alpha Sigma Phi fraternity was founded at Yale in 1845, making it the tenth oldest fraternity in the US.

Warren Buffett is one of my heroes. Despite being the third wealthiest man in the world, he lives a relatively frugal and modest life. He also has a very Jeffersonian attitude towards the role his wealth plays within his family. He has set up his estate so that his children get enough money to be independent, but the vast majority of his assets are going to charity, both before and after he dies.

36. Where to find Edam and Gouda: Abbr. : NETH
Some Dutch people can get a little annoyed if one refers to their country as “Holland”, as the correct name is “the Netherlands”. North and South Holland are two of the country’s twelve provinces. The use of “Holland” instead of “the Netherlands” is analogous to the former Soviet Union being referred to as “Russia” and the United Kingdom being called “England”. That said, sometimes even the Dutch people themselves refer to the country as Holland, especially at a soccer match!

Gouda is a cheese that originated in the Dutch city of the same name, although today Gouda is produced all over the world and very little of it comes from the Netherlands. Gouda is often smoke-cured, given it a yellowish-brown outer skin and that characteristic smoky taste.

42. Moderator of Tribal Councils on TV : PROBST
Jeff Probst is the highly successful host of the US version of the reality show “Survivor”. He is obviously a friendly guy, and ended up in a 3-year relationship with Julie Berry, one of the contestants from “Survivor: Vanuatu”.

47. “Nurse Jackie” star : FALCO
“Nurse Jackie” is a comedy-drama series centered on an emergency room nurse at a hospital in New York City. The lead character is played by Edie Falco, who also played Tony Soprano’s wife on the “The Sopranos”.

49. 1967 title role for Warren Beatty : CLYDE
Clyde Barrow was one half of the famous duo Bonnie and Clyde. Barrow was born a desperately poor young boy just south of Dallas, Texas. He was always in trouble with the law, first getting arrested at the age of 16. He met Bonnie Parker in 1930 at a friend’s house, and the smitten Parker followed Clyde into a life of crime. The pair were killed by a posse of Texas police officers just four years later in Louisiana.

“Bonnie and Clyde” is a 1967 crime film based on the life stories of outlaws Bobbie Parker and Clyde Barrow. Famously, Warren Beatty and Faye Dunaway played the title roles. “Bonnie and Clyde” was among the first 100 films chosen for preservation in the US National Film Registry.

52. Rhyme pattern at the end of a villanelle : ABAA
A “villanelle” or “villainesque” is a 19-line poem structured in five sets of three lines followed by a quatrain. The name of the genre comes from the Italian “villanella” that referred to a rustic song or dance. Originally, the pastoral theme of the poem was more important than its 19-line structure.

55. Coneheads, e.g., for short : ETS
“The Coneheads” first appeared in a “Saturday Night Live” sketch in 1977. The three family members back then were played by Dan Ackroyd (father), Jane Curtin (mother) and Laraine Newman (daughter). The characters became so popular they were featured in a “Coneheads” movie in 1993.