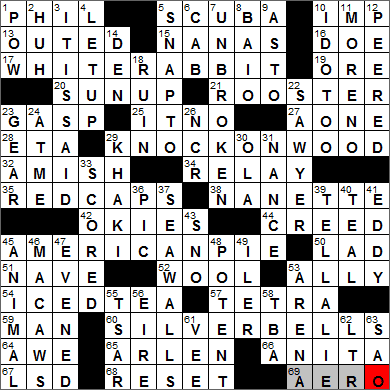 CROSSWORD SETTER: Dan Margolis
THEME: “Genres” of Songs … today’s themed answers are the names of songs that have been assigned an “unexpected” genre, one more suited the song title:

Today’s Wiki-est, Amazonian Googlies
Across
1. Afternoon TV’s Dr. ___ : PHIL
Dr. Phil (McGraw) met Oprah Winfrey when he was hired to work with her as a legal consultant during the Amarillo Texas beef trial (when the industry sued Oprah for libel over “Mad Cow Disease” statements). Oprah was impressed with Dr. Phil and invited him onto her show, and we haven’t stopped seeing him since!

13. No longer in the closet, say : OUTED
Back in the 1950s, to come “out of the closet” was to admit to being an alcoholic. By the seventies, the phrase mainly referred to gay people shrugging off secrecy about their orientation.

17. “Hip-hop” song of 1967 : WHITE RABBIT
“White Rabbit” is a song recorded in 1967 by Jefferson Airplane that made it into the top ten. The lyrics make blatant drug references, and use imagery from the “Alice” children’s novels by Lewis Carroll, including the White Rabbit, the White Knight, the Red Queen and the Dormouse.

32. Mennonite group : AMISH
The Amish are a group of Christian churches, a sub-group of the Mennonite churches. The Amish church originated in Switzerland and Alsace in 1693 when it was founded by Jakob Ammann. It was Ammann who gave the name to the Amish people. Many Amish people came to Pennsylvania in the 18th century.

35. Workers with lots of baggage : REDCAPS
“Redcap” is a term used for a railroad station porter here in North America. That term of course comes from the fact that redcaps wear red caps!

42. Residents of the Sooner State, informally : OKIES
“Okies” was a derogatory term used during the Dust Bowl of the 1930s for farming families who migrated from Oklahoma (hence the name), Arkansas, Kansas and Texas in search of agricultural jobs in California. The road used by many of these migrant families was Route 66, which is also called “Mother Road”.

45. “Country” song of 1971 : AMERICAN PIE
Don McLean released his greatest hit, “American Pie”, back in 1971. Despite the song’s iconic position in the pop repertoire, McLean has been remarkably reticent about its origins and the meaning of the lyrics. We do know that it was inspired by the death of Buddy Holly in a plane crash (“the day the music died”). McLean has also told us that he first read about the death of his idol when delivering newspapers the day after the crash (“February made me shiver/with every paper I’d deliver”). Although the lyrics have been analyzed and interpreted by many, McLean’s stance remains that it is just a poem set to music …

51. Main part of a church : NAVE
In large Christian churches, the nave is the main approach to the altar, where most of the faithful are seated.

60. “Metal” song of 1950 : SILVER BELLS
“Silver Bells” is a much-loved Christmas standard that appeared in the 1951 film “The Lemon Drop Kid”, in which it was performed by Bob Hope and Marilyn Maxwell. The song had first been recorded a year earlier by Bing Crosby and Carol Richards.

65. “Stormy Weather” composer : ARLEN
Harold Arlen is a composer of popular music who will forever be associated with his composition “Over the Rainbow” from the movie “The Wizard of Oz”. Arlen also composed the music to “Come Rain or Come Shine”, “It’s Only a Paper Moon”, “Lydia the Tattooed Lady” and the wonderful “Stormy Weather”.

66. Role for which 11-Down won her Oscar : ANITA
In Leonard Bernstein’s “West Side Story”, the female lead character is Maria and her older friend, also in the gang called the Sharks, is Anita.

67. It was dropped at Woodstock : LSD
LSD (colloquially known as “acid”) is short for lysergic acid diethylamide. A Swiss chemist called Albert Hofmann first synthesized LSD in 1938 in a research project looking for medically efficacious ergot alkaloids. It wasn’t until some five years later when Hofmann ingested some of the drug accidentally that its psychedelic properties were discovered. Trippy, man …

Down
6. Taxi : CAB
A hansom cab is a very specific design of horse and buggy that was patented by Joseph Hansom in 1834 in England. The “cab” in the name is short for “cabriolet”, a prior design of carriage on which the hansom was based. It’s from “hansom cab” that we get our modern term “cab”.

8. Scott of “Charles in Charge” : BAIO
Scott Baio is the actor who played Chachi Arcola in the great sitcom “Happy Days” and in the not so great spin-off “Joanie Loves Chachi”. Baio also played the title role in a later sitcom called “Charles in Charge”. Earlier in his career, he played another title role, in the 1976 movie “Bugsy Malone”, appearing opposite a young Jodie Foster.

11. Rita who won an Oscar for “West Side Story” : MORENO
The Puerto Rican singer, dancer and actress Rita Moreno is one of the few performers to have won an Oscar, Emmy, Grammy and Tony. Moreno got her big break, and won her Oscar, for playing Anita in the 1961 screen adaption of “West Side Story”.

Leonard Bernstein’s musical “West Side Story” is based on William Shakespeare’s “Romeo and Juliet”. The musical is set in New York City and features two rival gangs: the Sharks from Puerto Rico and the Jets with working-class, Caucasian roots. Tony from the Jets falls in love with Maria from the Sharks. All this parallels Romeo from the House of Montague falling for Juliet from the House of Capulet in the Italian city of Verona.

22. Fictional Tom or real-life Diane : SAWYER
Tom Sawyer is of course a favorite character created by Mark Twain. He turns up in four of Twain’s books:

Diane Sawyer is the anchor of ABC’s news program “ABC World News”. Sawyer started her career in the Nixon White House where she was hired by the Press Secretary at the time, Ron Ziegler. She worked with Nixon to help him write his memoirs after he left office and helped prepare the ex-president for his famous series of television interviews with David Frost in 1977. Sawyer is married to Mike Nichols, the noted film director.

26. Big maker of A.T.M.’s : NCR
NCR is an American company that has been in business since 1884, originally called the National Cash Register Company. The company has done well in a market where new technologies seem to be constantly disrupting the status quo.

29. Military uniform material : KHAKI
“Khaki” is an Urdu word, translating literally as “dusty”. The word was adopted for its current use as the name of a fabric by the British cavalry in India in the mid-1800s.

30. Suffix with pay or schnozz : -OLA
Payola is the illegal practice of paying radio stations or disk jockeys to repeatedly play a particular piece of music. The impetus behind the crime is that the more often a song is played, the more likely it is to sell. The term “payola” comes from the words “pay” and “Victrola”, an RCA brand name for an early phonograph.

31. F.D.R. veep John ___ Garner : NANCE
John Nance Garner was Speaker of the House when he ran against New York Governor Franklin Roosevelt for the nomination in the presidential race in 1932. When it was clear that Roosevelt was to win the nomination, Garner cut a deal with FDR and joined the ticket as candidate for Vice President. When the two Democrats won, they were sworn into office on March 4, 1933. As Garner was still Speaker of the House at the time, he is the only person to have held the office of Speaker and Vice President on the same day.

40. Blue-green : TEAL
The beautiful color of teal takes it name from the duck called a “teal”, which has dark greenish-blue (teal) markings on its head and wings.

43. ___-Caps (candy) : SNO
Sno-Caps are a brand of candy usually only available in movie theaters. Sno-caps have been around since the 1920s, would you believe?

46. Easily tamed tropical birds : MACAWS
Macaws are beautifully colored birds of native to Central and South America, and are actually a type of parrot. Most species of macaw are now endangered, with several having become extinct in recent decades. The main threats are deforestation and illegal trapping and trafficking of exotic birds.

49. Robert of “The Sopranos” : ILER
The actor Robert Iler’s most famous role was A.J., son of mob leader Tony Soprano in HBO’s “The Sopranos”. Apparently Iler’s screen persona has spilled over into his personal life, as he was arrested for armed robbery of two tourists in 2001 (and pleaded guilty to a lesser charge).

53. Madison Square Garden, e.g. : ARENA
Madison Square Garden is an arena in New York City used for a variety of events. In the world of sports it is home to the New York Rangers of the NHL, as well as the New York Knicks of the NBA. “The Garden” is also the third busiest music venue in the world in terms of ticket sales. The current arena is the fourth structure to bear the name, a name taken from the Madison Square location in Manhattan. In turn, the square was named for James Madison, the fourth President of the US.

55. Ivan or Nicholas : TSAR
The term czar (also tsar) is a Slavic word that was first used as a title by Simeon I of Bulgaria in 913 AD. “Czar” is derived from the word “Caesar”, which was synonymous with “emperor” at that time.

56. Dublin’s land : EIRE
“Éire”, is the Irish word for “Ireland”. “Erin” is an anglicized version of “Éire” and actually corresponds to “Éirinn”, the dative case of “Éire”.

The city of Dublin, the capital of Ireland, is known as Baile Átha Cliath in Irish (“town of the hurdled ford”). The English name “Dublin” is an anglicized form of the older Irish name for the city, “Dubh Linn” meaning “black pool”.

63. ___ Paulo, Brazil : SAO
São Paulo is the largest city in Brazil. São Paulo is also the city with the highest number of helicopters in the world. This is partly driven by the horrendous traffic jams in São Paulo, but also by the wealthy having a very real fear of being kidnapped on the city’s streets.