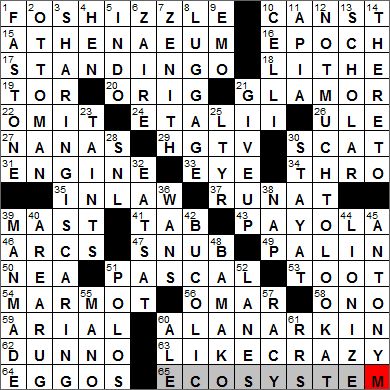 Today’s Wiki-est, Amazonian Googlies
Across
1. “Definitely, dawg!” : FO’SHIZZLE!
“Fo’shizzle” is slang for “for sure”, apparently. New to me, dawg …

10. Art enabled : CANST
Thou are enabled, thou canst.

15. Reading room : ATHENAEUM
An athenaeum is a reading room, particularly one in a library. In earlier times, an athenaeum was literary club or academy for the promotion of learning. The term derives from “Athenaion”, Greek for the temple of Athene in Ancient Athens. The Athenaion was somewhere that professors taught, and actors and poets practiced their lines and readings.

18. Moving supply : LITHE
Someone who is supple and lithe can move supply (also spelled “supplely”).

21. “It” : GLAMOR
Clara Bow was a fabulous star of silent film, with her most famous movie being “It” from 1927. Clara Bow’s performance was so celebrated in the movie that she was forever to be known as the “It-girl”. The term “it” was a euphemism for “sex appeal”, and that is what Clara Bow was known to “exude”. Bow applied her red lipstick in the shape of a heart, and women who copied this style were said to put on a “Clara Bow”.

29. “Property Virgins” cable channel : HGTV
HGTV first went on air in 1994, as the “Home, Lawn and Garden Channel”. The name was shortened (the lawn was dropped) soon after, but nowadays it’s just known as HGTV.

31. It’s often described by horses : ENGINE
The unit of horsepower was introduced along with the steam engine, where the output of the engine was compared with the power of draft horses. Largely, this comparison with the horse was a marketing ploy, as the intent was to demonstrate that one steam engine could negate the need for a number of draft horses used for work.

34. “And ___ the field the road runs by”: Tennyson : THRO’
“The Lady of Shalott” is a beautiful poem by Alfred, Lord Tennyson. The storyline is based on the Arthurian legend of Elaine of Astolat. The opening lines are:

On either side the river lie
Long fields of barley and of rye,
That clothe the wold and meet the sky.
And thro’ the field the road runs by
To many-tower’d Camelot

39. Clipper feature : MAST
A clipper was a sailing ship, commonly crossing the seas in the 19th century. Clippers were built for speed, so were narrow and had less room for carrying freight than many vessels used in trade. They were developed largely due to the demand for speedy delivery of fresh tea from China to Europe. The name comes from the term “to clip” meaning to move swiftly (as in “at a clip”). Perhaps the most famous clipper ship is the Cutty Sark built in 1869, the last clipper to be built as a merchant vessel. The Cutty Sark owes her fame to the fact that she is on display as a museum ship in a dry dock in Greenwich in London.

43. Radio racket : PAYOLA
Payola is the illegal practice of paying radio stations or disk jockeys to repeatedly play a particular piece of music. The impetus behind the crime is that the more often a song is played, the more likely it is to sell. The term “payola” comes from the words “pay” and “Victrola”, an RCA brand name for an early phonograph.

49. Subject of the 2011 book “The Rogue” : PALIN
“The Rogue: Searching for the Real Sarah Palin” is a 2011 biography written by Joe McGinniss. McGinniss’s first big seller was his book about the marketing of Richard Nixon during the 1968 presidential campaign called “The Selling of the President 1968”. That earlier title hit “The New York Times” bestseller list when McGinniss was just 26 years old, making him the youngest writer with that achievement.

50. Grp. seeking to improve No Child Left Behind : NEA
The National Education Association (NEA) is the largest labor union in the country, and mainly represents public school teachers.

The No Child Left Behind Act was proposed by President George W. Bush in 2001 and was signed into law with overwhelming and bipartisan support. The act focuses on standards-based reform of education in public schools. While there is no question about the good intentions, the act has proved to be controversial in implementation. There are plans afoot to replace it or improve it

51. “Pensées” philosopher : PASCAL
Blaise Pascal was an important French mathematician, physicist and philosopher, who lived in the mid-1600s. In math, his name was given to Pascal’s triangle, a triangle of numbers in which each number is the sum of the two numbers above it.

54. Woodchuck, e.g. : MARMOT
The woodchuck is also known as the groundhog, and is one a group of large ground squirrels called marmots.

56. Bradley with five stars : OMAR
Omar Bradley graduated from West Point in the class of 1915, along with Dwight Eisenhower who also attained the rank of General of the Army. Bradley was the last person to hold the rank of a five-star commissioned officer, and he was the first general to serve as Chairman of the Joint Chiefs of Staff. I was struck by a quotation from Bradley from later in his life:
Ours is a world of nuclear giants and ethical infants. We know more about war than about peace, more about killing than we know about living.

58. Musician who co-founded Nutopia : ONO
Back in the 1970s, John Lennon was having immigration problems here in the US where he lived with his wife Yoko Ono. With a satirical smile, Lennon and Ono held a press conference on April Fool’s Day in 1973 and announced that the couple were creating a fictional country called Nutopia (“new” + “utopia”). Lennon and Ono appointed themselves ambassadors of Nutopia and sought diplomatic immunity in order to get around John’s immigration issues.

60. “The Pentagon Papers” Emmy nominee : ALAN ARKIN
The actor Alan Arkin won his only Oscar (Best Supporting Actor) for his role in “Little Miss Sunshine” from 2006, a movie that I just did not understand …

“The Pentagon Papers” is a 3003 TV movie that deals with the events leading to Daniel Ellsberg’s release of classified document that became known as the Pentagon Papers. Ellsberg is played by James Spader, with Paul Giamatti and Alan Arkin in supporting roles.

Daniel Ellsberg is a former military analyst, who famously became very disillusioned with the Vietnam War. While still working as an analyst, he made copies of classified documents related to the Johnson administration’s conduct of the war. The documents, known as the Pentagon Papers, demonstrated that the administration knew early on that the Vietnam War was essentially “unwinnable” and that continued fighting would lead to higher numbers of casualties than was being projected in the public arena. Ellsberg ended up in court charged with espionage, but all charges were dropped when it was revealed that the Nixon administration had used illegal methods to bolster its case against the defendant.

64. A couple of rounds in a toaster? : EGGOS
Eggo is the brand name of a line of frozen waffles made by Kellogg’s. When they were introduced in the 1930s, the name “Eggo” was chosen to promote the “egginess” of the batter. “Eggo” replaced the original name chosen, which was “Froffles”, created by melding “frozen” and “waffles”.

Down
2. Easy chair accompanier : OTTOMAN
An ottoman is a cushioned footstool.

4. Blue symbol of Delaware : HEN
The Blue Hen has been the state bird of Delaware since 1939. As a result, the athletic teams of the University of Delaware are known as the Delaware Fightin’ Blue Hens.

5. Prefix with Germanic : INDO-
‘Indo-Germanic” is a term used to describe a specific group of languages and is synonymous with the term “Indo-European”.

9. Some punk : EMO
The musical genre of “emo” originated in Washington D.C. in the 80s, and takes its name from “emotional hardcore”. Not my cup of tea …

The word “cello” is an abbreviation for “violoncello”, an Italian word for “little violone”, referring to a group of stringed instruments that were popular up to the end of the 17th century. The name violoncello persisted for the instrument that we know today, although the abbreviation ‘cello was often used. Nowadays we just drop the apostrophe.

11. Pacific port : APIA
Apia is the capital city, and in fact the only city, of the Pacific island-nation of Samoa. The harbor of Apia is famous for a very foolish incident in 1889 involving seven naval vessels from Germany, the US and Britain. A typhoon was approaching so the safest thing to do was to head for open water away from land, but no nation would move its ships for fear of losing face in front of the others. Six of the ships were lost in the typhoon as a result and 200 American and German sailors perished. The British cruiser HMS Calliope barely managed to escape from the harbor and rode out the storm safely.

14. “Add ___ a tiger’s chaudron, / For the ingredients of our cauldron”: Shak. : THERETO
The Three Witches in William Shakespeare’s “Macbeth” cook up an ugly brew in their cauldron:

Scale of dragon, tooth of wolf,
Witches’ mummy, maw and gulf
Of the ravined salt-sea shark,
Root of hemlock digged i’ th’ dark,
Liver of blaspheming Jew,
Gall of goat and slips of yew
Slivered in the moon’s eclipse,
Nose of Turk and Tartar’s lips,
Finger of birth-strangled babe
Ditch-delivered by a drab,
Make the gruel thick and slab.
Add thereto a tiger’s chaudron,
For the ingredients of our cauldron.

25. Astronomical distance: Abbr. : LT-YR
A light-year is a measure of distance, not time. It is the distance that light travels in a vacuum in one year. The accepted abbreviation for a light-year is “ly”. A light-second is a lot shorter distance: about 186,282 miles.

42. Country : BUCOLIC
The word “bucolic”, meaning rustic or rural, comes to us from the Greek word “boukolos” meaning “cowherd”.

44. Hero-worship : LIONIZE
The term “lionize” dates back to the late 1700s when there were lions kept in the Tower of London. The lions were quite famous, and attracted many visitors. Hence the term “lionize” means to treat someone as a celebrity.

45. Learn to teach? : ANTONYM
An antonym is an “anti-synonym”. A synonym is word having the same sense as another, and an antonym the opposite. For example, “learn” is an antonym of “teach”.

48. Capital on the Niger : BAMAKO
Bamako is the capital of the African country of Mali. It is the fastest growing city on the whole continent. Located on the Niger River, the name “Bamako” translates from the local language as “crocodile river”.

51. Some preppy wear : POLOS
René Lacoste was a French tennis player who went into the clothing business, and came up with a more comfortable shirt that players could use. This became known as a “tennis shirt”. When it was adopted for use in the sport of polo, the shirts also became known as “polo shirts”. And then the “golf shirt” is basically the same thing.

60. It can make you squiffy : ALE
“Squiffy” is a british term meaning “drunk”.

The commercial game of Monopoly is supposedly a remake of a game called “The Landlord’s Game” created in 1903 by a Quaker woman called Lizzie Phillips who created it as a tool to explain the single tax theory of American economist Henry George. The Landlord’s Game was actually produced commercially in 1924. The incredibly successful derivative game called Monopoly was introduced in 1933 by Charles Darrow, making him a very rich man when Parker Brothers bought the rights to the game just two years later in 1935.