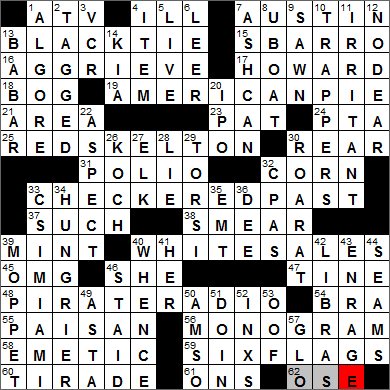 CROSSWORD SETTER: David Steinberg
THEME: Six Flags … each of the SIX themed answers today starts with a type of FLAG:

59A. Popular day trip destination … or a hint to the starts of the answers to the starred clues : SIX FLAGS

A utility vehicle is often called a “ute” for short. Nowadays one mainly hears about sports utes and crossover utes.

7. Where Whole Foods is headquartered : AUSTIN
The first Whole Foods Market was opened in 1980 by John Mackey and partners in Austin, Texas. For the two years prior to the Whole Foods launch, Mackay was operating his natural foods store that he called “Saferway”, as opposed to “Safeway”. Clever name …

13. *Kind of affair : BLACK TIE (giving “black flag”)
The phrase “black flag” can apply to a racing flag, a brand of insecticide or is an alternative name for a pirate ship’s “Jolly Roger”.

17. Alma mater for Toni Morrison and Zora Neale Hurston : HOWARD
Howard University is a private school in Washington, D.C. Howard was founded soon after the Civil War in 1867 with a focus on the education of African-American students, although it was open to all races, both sexes and was non-sectarian.

19. *1971 song with the lyric “Helter skelter in a summer swelter” : AMERICAN PIE (giving “American flag”)
Don McLean released his greatest hit, “American Pie”, back in 1971. Despite the song’s iconic position in the pop repertoire, McLean has been remarkably reticent about its origins and the meaning of the lyrics. We do know that it was inspired by the death of Buddy Holly in a plane crash (“the day the music died”). McLean has also told us that he first read about the death of his idol when delivering newspapers the day after the crash (“February made me shiver/with every paper I’d deliver”). Although the lyrics have been analyzed and interpreted by many, McLean’s stance remains that it is just a poem set to music …

Legend has it that Betsy Ross made the first American flag for General George Washington. However, this story only surfaced during the centennial celebrations of 1876, and although Betsy Ross was indeed one of several flag makers in Philadelphia in the days of George Washington, sadly there’s no definitive evidence that Ross provided that first stars and stripes.

23. One way to stand : PAT
“To stand pat” is to resist change. The term comes from the game of poker, in which one “stands pat” if one keeps one’s hand as is, not drawing any extra cards.

25. *Creator of Sheriff Deadeye and Cauliflower McPugg : RED SKELTON (giving “red flag”)
Red Skelton was an American comedian who started out in show business as a teenager working with the circus. Skelton had a very successful career on radio before moving to television in the early fifties. His popularity only began to fade in the early seventies, when he had difficulty appealing to younger audiences. Skelton spent less time performing in his latter years, and turned to his other great love … painting.

40. *January events : WHITE SALES (giving “white flag”)
The first white sale took place in January of 1878 in a Philadelphia department store. It was called a white sale because it was only bed linens (which were all white) that were discounted. Over time, white sales have evolved to include almost any household items.

The use of a white flag is recognized as a request for a ceasefire or negotiation. As it is usually the weaker party who wants to initiate negotiation, it is also seen as a sign of surrender.

45. Exclamation often followed by multiple exclamation points : OMG!!!
OMG is text-speak for “Oh my gosh!” or “Oh my goodness!” or any other G words you might think of …

46. First song on “More of the Monkees” : SHE
The Monkees pop group was assembled in 1966 specifically for a planned television series called “The Monkees”. The show aired from 1966 to 1968, and the band continued to perform in concerts until 1970. 20 years after the band was formed, there was a revival in interest for both the show and the band’s music, so the Monkees got together for several reunion tours. The lead singer of the group was Englishman Davy Jones, who passed away in February 2012.

48. *Some illegal transmissions : PIRATE RADIO (giving “pirate flag”)
The Jolly Roger is a flag that was flown by pirates to identify their vessels, basically to strike fear in the hearts of the crews they were attacking. We usually think of the Jolly Roger’s design as a white skull and crossbones on a black background. There is a theory that pirates originally flew a red flag, and this was known colloquially as the “pretty red”, or “joli rouge” in French. “Joli Rouge” then evolved into “Jolly Roger”.

56. Feature of some stationery : MONOGRAM
“Stationery” is a noun describing writing materials and office supplies, items that are sold by a stationer. Centuries ago, a stationer was someone who sold goods from a shop or a “station”, from a fixed, stationary stall.

58. Emergency room agent : EMETIC
An emetic, like syrup of ipecac, is a substance that induces vomiting.

59. Popular day trip destination … or a hint to the starts of the answers to the starred clues : SIX FLAGS
The Six Flags Entertainment Corporation is an operator of amusement parks that is headquartered in Grand Prairie, Texas. Six Flags owns more amusement parks than any other company in the world. The first of these properties to open was Six Flags Over Texas. The park’s name was chosen as a homage to the flags of the six nations that have governed Texas, namely Spain, France, Mexico, the Republic of Texas, the United States of America, and the Confederate States of America.

61. Switch halves : ONS
Many switches can be in either the “on” position or “off” position.

Down
1. Nobelist who won an Emmy : AL GORE
Former Vice President Al Gore was a joint recipient of the Nobel Peace Prize in 2007 in recognition for his work in climate change activism. He also won a Grammy for Best Spoken Word Album for his book on climate change called “An Inconvenient Truth”. The documentary of the same name that was spawned by the book won an Academy Award. In addition, Gore won an Emmy as co-owner of Current TV, an independent news network.

4. Couple of stars, say : ITEM
An unmarried couple known to be involved with each other might appear in the gossip columns. This appearance as “an item” in the papers, led to the use of “item” to refer to such a couple, but only since the very early seventies.

5. ___-blog : LIVE
“To live-blog” is to write and publish blog posts about an event as that event is happening, to “blog live”.

7. 8-Down sinker : ASHCAN
Depth charges, especially older ones used during WWII, are metallic cylindrical devices resembling ashcans, and so they are known familiarly as “ashcans”.

8. See 7-Down : U-BOAT
U-boat stands for the German “Unterseeboot” (undersea boat). U-boats were primarily used in WWII to enforce a blockade against enemy commercial shipping, with a main objective being to cut off the supplies being transported to Britain from the British colonies and the US. The epic fight for control of the supply routes became known as the Battle of the Atlantic.

9. Like logs, quaintly : SAWN
Someone who is snoring is said to be “sawing logs”.

13. “Le petit éléphant” : BABAR
“Babar the Elephant” originated in France, a creation of Jean de Brunhoff in 1931. The first book was “Histoire de Babar”, a book so successful it was translated into English two years later for publication in Britain and the US. Jean de Brunhoff wrote six more Babar stories before he died in 1937, and then his son Laurent continued his father’s work.

14. Rio maker : KIA
Kia have making the subcompact model called a Rio since 2000.

20. 2004 Google event, briefly : IPO
An Initial Public Offering (IPO) is the very first offer of stock for sale by a company on the open market. In other words, an IPO marks the first time that a company is traded on a public exchange. Companies have an IPO to raise capital to expand (usually).

26. ___ Industries (oil giant) : KOCH
Koch Industries is a huge company with diverse interests, but with the oil industry at its core. The company was founded in 1940 by Fred C. Koch. Reportedly, Koch is the second largest privately-held company in the US, after Cargill. Today Koch Industries is owned by two of Fred’s sons: Charles and David H. Koch. Famously, the Koch Brothers are known for contributing hundreds of million dollars to conservative political causes and candidates.

29. Sculpture subjects : TORSI
“Torso” (plural “torsi”) is an Italian word meaning the “trunk of a statue”, a word that we imported into English.

32. They face liabilities in their work, in brief : CPAS
Certified public accountant (CPA)

33. CBS spinoff that was filmed mostly in California : CSI: MIAMI
The “CSI” franchise of TV shows has been tremendously successful, but seems to be winding down. “CSI: Miami” (the “worst” of the franchise, I think) was cancelled in 2012 after ten seasons. “CSI: NY” (the “best” of the franchise) was cancelled in 2013 after nine seasons. The original “CSI: Crime Scene Investigation”, set in Las Vegas, is still going strong and has been doing so since 2000.

39. Tot, affectionately : MOPPET
A “moppet” is a young child. The term is a variant of “poppet”.

40. Word often redundantly preceded by “from” : WHENCE
“Whence” is a lovely word, with the meaning “from where”.

41. 2013 Best Picture nominee : HER
2003’s “Her” seems to be a rather unusual film, although I’ve only see the trailer. It stars Joaquin Phoenix as a man who develops a relationship with a computer operating system called “Samantha”, which is voiced by Scarlett Johansson.

42. Some September babies : LIBRAS
The constellation of Libra is named for the scales held by the goddess of justice. Libra is the only sign of the zodiac that isn’t named for a living creature.

49. Film dog : ASTA
Asta is the wonderful little dog in the superb “The Thin Man” series of films starring William Powell and Myrna Loy (as Nick and Nora Charles). In the original story by Dashiell Hammett, Asta was a female Schnauzer, but on screen Asta was played by a wire-haired fox terrier called “Skippy”. Skippy was also the dog in “Bringing up Baby” with Cary Grant and Katharine Hepburn, the one who kept stealing the dinosaur bone. Skippy retired in 1939, so Asta was played by other dogs in the remainder of “The Thin Man” films.

52. “Suicide Blonde” band : INXS
INXS (pronounced “in excess”) was a rock band from Australia. The band formed in 1977 in Sydney as the Farriss Brothers, as three of the original lineups were indeed brothers.

57. Day-___ : GLO
“Dayglo” is a registered trademark used for an ink or paint that glows when exposed to a black light in a darkened room. When Dayglo paint is viewed in daylight the colors can look particularly vivid because they respond to the UV light that is present in sunlight.