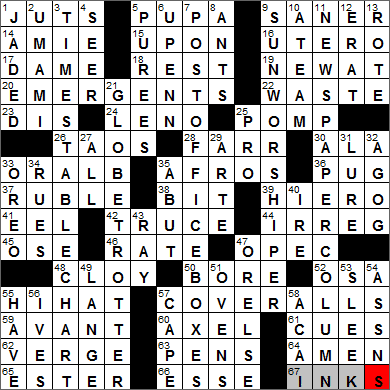 CROSSWORD SETTER: Jules P. Markey
THEME: Newspaper Columns … today’s themed answers all in the down direction i.e. they are in COLUMNS. Also, each answer starts with the name of a newspaper, making the answers NEWSPAPER COLUMNS:

Today’s Wiki-est, Amazonian Googlies
Across
5. Cocoon contents : PUPA
The pupa is an intermediate stage in the development of an insect. All four stages are: embryo, larva, pupa and imago.

16. In ___ (unborn) : UTERO
“In utero” is a Latin term meaning “in the uterus”. The Latin “uterus” translates as both “womb” and “belly”. The Latin word was derived from the Greek “hystera” also meaning womb, which gives us the words “hysterectomy”, and “hysterical”.

17. Agatha Christie title : DAME
Not only did Agatha Christie write a fabulous collection of murder-mystery stories, she also wrote romances, but under the pen name Mary Westmacott. I’ve read almost all of Christie’s 66 detective novels, but I must admit, not one of her romance novels.

18. “Parade ___!” : REST
The military parade command “Parade Rest!” is similar to the command “Stand at Ease!” The only difference is that when given the “Stand at Ease!” command a soldier must turn the head to look at whoever is addressing him or her.

23. Trash : DIS
“Dis” is a slang term meaning “insult” that originated in the eighties, and is a shortened form of “disrespect” or “dismiss”.

24. 2014 TV retiree : LENO
Jay Leno was born James Leno in New Rochelle, New York. Jay’s father was the son of Italian immigrants, and his mother was from Scotland. Leno grew up in Andover, Massachusetts and actually dropped out of school on the advice of a high school guidance counsellor. However, years later he went to Emerson college and earned a Bachelor’s degree in speech therapy. Leno also started a comedy club at Emerson in 1973. Today Jay Leno is a car nut and owns about 200 vehicles of various types. You can check them out on his website: www.jaylenosgarage.com.

26. ___ Ski Valley, N.M. : TAOS
Taos Ski Valley is a resort village in New Mexico, founded in 1955. About twelve families live there, making up thirty or so households and a population of about 60 people. It is said to very much resemble a Swiss village, and even includes an elected village council.

28. Jamie of old TV : FARR
Actor Jamie Farr is best known for playing the cross-dressing Max Klinger in the sitcom ”M*A*S*H”. Although Farr landed a role in the 1955 movie “Blackboard Jungle”, his career didn’t really take off until he started appearing regularly on “The Red Skelton Show”. Years later he managed to get a one-episode appearance in ”M*A*S*H”, and his character and performance was received so well that he became a regular on the show. Farr actually did serve in the US Army in Korea, although it was after hostilities had ended. The dog tags that Farr wore when filming ”M*A*S*H” were the one’s he actually wore while serving in the military.

30. ___ carte : A LA
On a restaurant menu, items that are “à la carte” are priced and ordered separately. A menu marked “table d’hôte” (also called “prix fixe”) is a fixed-price menu with limited choice.

33. Brand in a bathroom cabinet : ORAL-B
The Oral-B toothbrush was introduced to the world in 1950, designed by a California periodontist. The first “model” was the Oral-B 60, a name given to reflect the 60 tufts in the brush. In 1969, the Oral-B was the first toothbrush to get to the moon as it was the toothbrush of choice for the crew of the Apollo 11 spacecraft.

36. Wrinkly-faced dog : PUG
The pug is a breed of dog of Chinese origin. Our current family pet is a boxer/pug cross, a good-looking mutt!

37. Russian money : RUBLE
The ruble (also “rouble”) is the unit of currency in Russia, as well as several other countries of the former Soviet Union. One ruble is divided into one hundred kopecks.

April Fool’s Day is celebrated on April 1st in the western world. In the US (and Ireland) one can make practical jokes all day long if one wants. But in the UK there is a noon deadline. Anyone pranking after midday is called an “April Fool”.

39. Prefix with glyphic : HIERO-
Hieroglyphs are pictorial symbols used in some writing systems.

47. Indonesia joined it in 1962 … and left in 2008 : OPEC
OPEC was created in 1960, with Indonesia joining the organization in 1962. Indonesia left OPEC in 2008 as the country was no longer able to meet the assigned production quota and had actually become a net importer of oil.

48. Be too sweet : CLOY
“To cloy” is to cause distaste by oversupplying something that would otherwise be pleasant, especially something with a sweet taste.

55. Drum kit part : HI-HAT
In a drum kit, a hi-hat is that pairing of cymbals that sits on a stand and is played by using a foot pedal. The top cymbal is raised and lowered by the foot, hence creating a crashing sound.

60. Rink jump : AXEL
An Axel is a forward take-off jump in figure skating. It was first performed by Norwegian Axel Paulsen at the 1882 World Figure Skating championships.

64. Word said just before opening the eyes : AMEN
The word “amen” is translated as “so be it”. “Amen” is said to be of Hebrew origin, but it is likely to be also influenced by Aramaic and Arabic.

65. Nitroglycerin, e.g. : ESTER
Esters are very common chemicals. The smaller, low-molecular weight esters are usually pleasant smelling and are often found in perfumes. At the other end of the scale, the higher-molecular weight nitroglycerin is a nitrate ester and is very explosive, and polyester is a huge molecule and is a type of plastic. Fats and oils found in nature are fatty acid esters of glycerol.

Nitroglycerin (also known as “nitro”) is a very unstable, oily, colorless liquid. It is usually used as the explosive ingredient in a stabilized product like dynamite or cordite. Nitroglycerin is also used medically, as a vasodilator. Right after it hits the bloodstream is causes the blood vessels to dilate to that the heart has less work to do. I had occasion to take it a couple of times, and boy, what a speedy and fundamental effect it has.

Down
1. Feeling “been there, done that,” say : JADED
Our term “jaded”, meaning tired and feeling a little “ho-hum”, comes from the noun “jade” which in the 14th century was an old, worn-out horse.

6. Phila. school : UPENN
The University of Pennsylvania (Penn or UPenn) was founded in 1740 by by Benjamin Franklin. Penn was the first school in the country to offer both graduate and undergraduate courses.

8. Sources of formic acid : ANTS
Most nettle species have stinging hairs that secrete formic acid. This formic acid is the same chemical that is found in the venom injected with a bee or ant sting. The Latin word for ant is “formica” and gives its name to the acid.

12. Part of Q.E.D. : ERAT
QED is used at the end of a mathematical proof or a philosophical argument. The QED acronym stands for the Latin “quod erat demonstrandum” meaning “that which was to be demonstrated”.

21. Basketball showman : GLOBETROTTER
The Harlem Globetrotter exhibition basketball team was founded in 1927 in Chicago, where the original players grew up and went to high school. The team had moved to Harlem, New York by 1929 as Harlem was regarded as the hub of African-American culture at that time.

29. Prado works : ARTE
The Museo del Prado is in Madrid, the capital of Spain, and has one of the finest art collections in the world. The gallery’s most famous work is “Las Meninas” By Velazquez.

33. Cookie that’s kosher : OREO
The Oreo was the best-selling cookie in the 20th century, and almost 500 billion of them have been sold since they were introduced in 1912 by Nabisco. In those early days the creme filling was made with pork fat, but today vegetable oils are used instead. If you take a bite out of an Oreo sold outside of America you might notice a difference from the homegrown cookie, as coconut oil is added in the overseas version to give a different taste.

49. Hope in Hollywood : LANGE
The actress Hope Lange is probably best known for playing Selena Cross in the 1957 film “Peyton Place”, a role for which she was Oscar-nominated. Lange also played Mrs. Muir in the TV show “The Ghost & Mrs. Muir” that aired from 1968 to 1970.

56. Composer Charles : IVES
Charles Ives was one of the great classical composers, probably the first American to be so recognized. Sadly, his work largely went unsung (pun intended!) during his lifetime, and was really only accepted into the performed repertoire after his death in 1954.

57. ___ Verde Islands : CAPE
The Republic of Cape Verde is an island nation in the Atlantic Ocean off the west coast of Africa. The country takes its name from Cap-Vert, a peninsula in Senegal and the most westerly point on the continent. Cape Verde was an uninhabited group of islands when it was colonized by the Portuguese in the 15th century.

58. Palm fruit : ACAI
Açaí is a palm tree native to Central and South America. The fruit has become very popular in recent years and its juice is a very fashionable addition to juice mixes and smoothies.