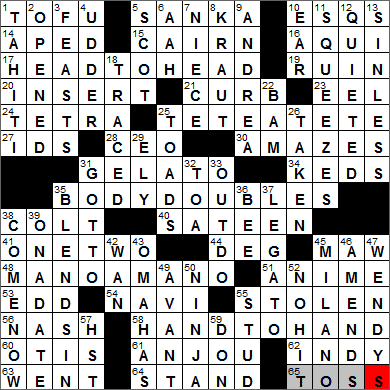 Today’s Wiki-est, Amazonian Googlies
Across
1. Protein-rich food : TOFU
Tofu is another name for bean curd, and is a Japanese word meaning just that … bean that has “curdled”. Tofu is produced by coagulating soy milk, using either salt or something acidic. Once the protein has coagulated, the curds are pressed into the familiar blocks. Personally I love tofu, but my wife, she absolutely hates it …

5. Brand of instant coffee : SANKA
The first successful process for removing caffeine from coffee involved steaming the beans in salt water, and then extracting the caffeine using benzene (a potent carcinogen) as a solvent. Coffee processed this way was sold as Sanka here in the US. There are other processes used these days, and let’s hope they are safer …

10. Titles for attorneys: Abbr. : ESQS
The title “esquire” is of British origin and is used differently today depending on whether one is in the US or the UK. Here in America the term is usually reserved for those practicing the law (both male and female). In the UK, “esquire” is a term of gentle respect reserved for a male who has no other title that one can use. So a mere commoner like me might receive a letter from the bank say, addressed to W. E. Butler Esq.

15. ___ terrier (dog breed) : CAIRN
The Cairn Terrier breed of dog originated in the Highlands of Scotland. The breed is named for the original task given to the dog,rooting out rats and other rodents from man-made piles of stones called cairns.

19. Bankrupt : RUIN
Our word “bankruptcy” comes from the Italian “banca rotta”, which translates as “broken bench”. This etymology may stem from the practice of breaking the bench or counter of moneychanger’s place of business in order to signify insolvency.

21. “___ Your Enthusiasm” : CURB
“Curb Your Enthusiasm” is an improv comedy show aired by HBO that was created and stars Larry David, the creator of “Seinfeld”. As an aside, Larry David sat a few feet from me at the next table in a Los Angeles restaurant not so long ago. I have such a huge claim to fame …

31. Italian ice cream : GELATO
Gelato is the Italian version of American ice cream, differing in that it has a lower butterfat content than its US counterpart.

34. Sneakers since 1916 : KEDS
Keds is a brand name of athletic shoe first introduced in 1916 by US Rubber. The shoe was originally marketed as a rubber-soled, canvas-topped sneaker.

40. Sleek fabric : SATEEN
Sateen is a cotton fabric, with a weave that is “four over, one under” meaning that most of the threads come to the surface giving it a softer feel.

53. Roush of the Baseball Hall of Fame : EDD
Edd Roush was a big hitter who played Major League Baseball, starting in 1913 for the Chicago White Sox. He jumped ship to the Federal League in 1914, a league set up to compete with the already well-established National and American Leagues. The upstart league only lasted a couple of seasons. When Edd Roush passed away in 1988 at the age of 94, he was the last surviving player from the short-lived Federal League.

54. “Avatar” race : NA’VI
In the James Cameron epic “Avatar”, the “blue people” are the Na’vi, the indigenous species that lives on the lush moon called Pandora. The main Na’vi character featuring in the film is the female Neytiri. According to Cameron, Neytiri was inspired by the Raquel Welch character in the movie “Fantastic Voyage” and the comic book character Vampirella.

56. Crosby, Stills, ___ & Young : NASH
Graham Nash is a singer-songwriter from England. Nash is famous as one of the founders of the Hollies, and as a member of the supergroup Crosby, Stills, Nash & Young.

60. Redding of R&B : OTIS
Otis Redding is often referred to as the “King of Soul”, and what a voice he had. Like so many of the greats in the world of popular music it seems, Redding was killed in a plane crash, in 1967 when he was just 26 years old. Just three days earlier he had recorded what was to be his biggest hit, “(Sittin’ On) The Dock of the Bay”.

61. Winter pear : ANJOU
The Anjou pear is a cultivar of the European Pear. The Anjou pear is thought to have originated in Belgium or France (Anjou is a province in the Loire Valley of western France).

62. Memorial Day race, informally : INDY
The first Indy 500 race was held on Memorial Day in 1911. The winner that day was one Ray Harroun. Harroun had seen someone using a rear view mirror on a horse-drawn vehicle, and decided to fit one on his Marmon “Wasp” motor car. Supposedly that was the first ever use of a rear view mirror on a motor vehicle.

Down
1. Polynesian paradise : TAHITI
Captain Cook landed in Tahiti in 1769, although he wasn’t the first European to do so. But Cook’s visit to Tahiti was the most significant in that it heralded a whole spate of European visitors, who brought with them prostitution, venereal disease and alcohol. Paradoxically, they also brought Christianity. Included among the subsequent visitors was the famous HMS Bounty under the charge of Captain Bligh.

5. Many a person whose name starts “Mc-” : SCOT
The prefixes “Mc-” and “Mac-” found in Scottish and Irish names can be translated as “son of”.

8. “Sauer” hot dog topping : KRAUT
“Sauerkraut” translates from German as “sour herb” or “sour cabbage”. During WWI, sauerkraut producers changes its name in order to distance their product from the “enemy”. They called it “Liberty cabbage”.

29. English cathedral town : ELY
Ely Cathedral is a famous and beautiful church in the city of Ely in the county of Cambridgeshire. There is a Gothic door on the north face of the cathedral that was designed by Sir Christopher Wren, the man famous as the architect of St. Paul’s Cathedral in London. Christopher Wren had a personal link to the church, as his uncle was the Bishop of Ely.

32. “Ode ___ Nightingale” : TO A
“Ode to a Nightingale” was one of the so-called “1819 Odes” written by the poet John Keats, a collection that included famous poems such as “Ode on Melancholy”, “Ode on Grecian Urn” and “Ode to Psyche”.

37. In a smooth, flowing manner, in music : LEGATO
Legato is a musical direction, signifying that long and continuous notes should be played very smoothly. The opposite of legato is staccato, notes played in a disconnected form.

45. Certain Pepperidge Farm cookie : MILANO
Before the Milano, Pepperidge Farm produced what they called the Naples cookie, a vanilla wafer with chocolate on top. But, this lovely morsel had problems when stored or transported in a warm environment as the cookies stuck to each other, The solution was to put the filling between two wafers, and the Milano cookie was born.

47. Hamburger chain that offers the Baconator : WENDY’S
Famously, the Wendy’s chain of fast food restaurants was founded by Dave Thomas, in 1969 in Columbus, Ohio. Dave named his establishment after his fourth child: Melina Lou “Wendy” Thomas.

49. ___-garde : AVANT
People described as being avant-garde are especially innovative. “Avant-garde” is French for “advance guard”.

50. Masked Japanese fighter : NINJA
The ninjas were around in Japan at the time of the samurai, but were a very different type of warrior. The ninjas were covert operatives, specializing in the use of stealth to accomplish their missions. As they were a secretive cadre they took on a mystical reputation with the public, who believed they had the ability to become invisible or perhaps walk on water.

57. F.D.R.’s successor : HST
The initial “S” in the middle of the name Harry S. Truman (HST) doesn’t stand for anything. The future-president was named “Harry” in honor of his mother’s brother Harrison “Harry” Young. The initial “S” was chosen in honor of young Harry’s two grandfathers: Anderson S-hipp Truman and S-olomon Young.

Franklin Delano Roosevelt (FDR) was the only child of Sara Delano and James Roosevelt Sr. The Delano family history in America goes back to the pilgrim Philippe de Lannoy, an immigrant of Flemish descent who arrived at Plymouth, Massachusetts in 1621. The family name “de Lannoy” was anglicized here in the US, to “Delano”.

59. “___ we now our gay apparel” : DON
The music for “Deck the Halls” is a traditional Welsh tune that dates back to the 16th century. The same tune was used by Mozart for a violin and piano duet. The lyrics with which we are familiar (other than the “tra-la-la”) are American in origin, and were recorded in 19th century.