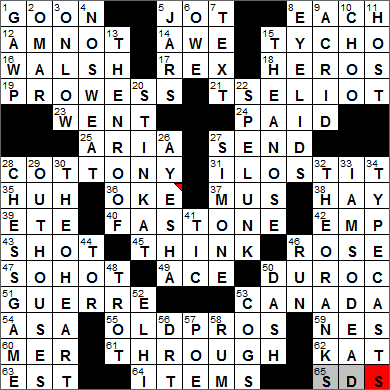 CROSSWORD SETTER: Mary Lou Guizzo & Jeff Chen
THEME: Think Through … today’s themed answers are each in two parts, with one going THROUGH the other physically in the grid:

Today’s Wiki-est, Amazonian Googlies
Across
5. Little bit : JOT
A “jot” is something very small, from the Latin “jota”, which in turn is from the Greek “iota”, the smallest letter in the Greek alphabet.

15. Astronomer ___ Brahe : TYCHO
Tycho Brahe was an astronomer and contemporary of Galileo. Brahe lost his nose in a duel, and wore a replacement made of either silver or gold that was pasted onto his face!

17. “Toy Story” character : REX
In the excellent film “Toy Story”, Rex is of course a tyrannosaurus, and a pretty clumsy one. He is voiced by actor Wallace Shawn, whose name is perhaps less familiar than his face. Shawn played the neighbor on “The Cosby Show” as well as many, many other supporting roles on TV and the big screen.

1995’s “Toy Story” was the world’s first feature-length computer-animated movie. “Toy Story” was also the studio Pixar’s first production. The main roles in the film are Woody and Buzz, voiced by Tom Hanks and Tim Allen respectively. Hanks was the first choice to voice Woody, Allen was asked to voice Buzz after Billy Crystal turned down the role.

18. Subway fare? : HEROS
“Hero” is another name for a submarine sandwich. The hero originated in New York City in the 1800s among Italian immigrants who wanted an Italian sandwich that reminded them of home. The name “hero” was coined in the 1930s, supposedly by a food critic in the “New York Herald Tribune” when he wrote that “one had to be a hero” to finish the gigantic sandwich. Hero is a prevalent term to this day in New York City, reserved for a submarine sandwich with an Italian flavor.

The SUBWAY chain of fast food restaurants is the largest single-brand restaurant in the world. I’m a big fan of SUBWAY sandwiches …

19. Superior skill : PROWESS
“Prowess” is a superior ability, and is particularly used as a reference to ability on the battlefield. The term “prowess” comes from an old French word meaning “brave, valiant”.

25. Song that may be performed with supertitles : ARIA
Conceptually “surtitles” (also “supertitles”) at say an opera are like subtitles in a film. Translations of the libretto are projected above the stage for the benefit of the audience.

37. Symbols for statistical means : MUS
Mu is the Greek letter, the forerunner to our Roman letter M.

39. Summer in Québec : ETE
One might spend the summer (été) under the sun (le soleil) in French-speaking countries.

Québec is the largest province in Canada, and the only one with French as its sole official language. The name “Québec” comes from an Algonquin word “kebec” meaning “where the river narrows”. This refers to the area around Quebec City where the St. Lawrence River narrows as it flows through a gap lined by steep cliffs.

42. H.R.E. part: Abbr. : EMP
The Holy Roman Empire (HRE) existed from 962 to 1806 AD and was a territory of varying size over the centuries that centered on the Kingdom of Germany. The HRE was a successor to the western half of the Ancient Roman Empire.

47. Not ___ (meh) : SO HOT
“Meh!” is one of those terms unfamiliar to me outside of crosswords. It is a modern colloquialism meaning “I’m not great, but not bad”. A friendly reader of this blog tells me that the usage of the term increased dramatically after it started to appear regularly in “The Simpsons” starting in the early nineties.

50. Hardy hog breed : DUROC
A Duroc is a breed of domestic pig, red in color and with a large frame, and a tendency to be quite aggressive. The breed originated in New England and supposedly takes its name from a thoroughbred stallion that was famous around 1800.

51. Opposite of paix : GUERRE
In French, war (guerre) is the opposite of peace (paix).

53. World powerhouse in curling : CANADA
I think curling is a cool game (pun intended!). It’s somewhat like bowls, but played on a sheet of ice. The sport was supposedly invented in medieval Scotland, and is called curling because of the action of the granite stone is it moves across the ice. A player can make the stone take a curved path (“curl”) by causing it to slowly rotate as it slides.

54. Botanist Gray : ASA
Asa Gray was an important American botanist in the nineteenth century. He was a lifelong friend of Charles Darwin, albeit mainly through correspondence. Darwin’s book “Forms of Flowers”, was dedicated to Gray.

60. Debussy’s “La ___” : MER
“La Mer” is a lovely group of three symphonic sketches for orchestra by the French composer Claude Debussy. Listen to it, and you can feel yourself at the ocean. “La Mer” is French for “The Sea”.

62. Kit ___ bar : KAT
I grew up eating Kit Kat bars as a kid, as the chocolate confection has been around since the thirties. Kit Kats didn’t hit the shelves in the US until the seventies. I’ve seen new varieties of Kit Kat over in the UK, such as an orange-flavored version, but haven’t seen anything like that over here.

65. ’60s campus org. : SDS
Students for a Democratic Society (SDS) was an activist group in the sixties. The SDS organized the largest student strike in the history of the United States on 26 April 1968, with about a million students staying away from class that day. The “Students for a Democratic Society” name was revived in 2006 with the foundation of a new US-based student organization with left wing beliefs. Today’s SDS was founded by a pair of high school students from Greenwich Village, New York.

7. Emoticon medium : TEXT
An emoticon is a glyph created using text characters to represent facial features, and usually oriented sideways. The emoticon is designed to indicate emotion or attitude. The classic example is the smiley face 🙂

11. Human in “Alien,” e.g. : HOST
In a famous scene in the 1979 science-fiction movie “Alien”, an alien creature bursts out of the chest of a crew member who is acting as the creature’s host.

The 1979 sci-fi horror movie “Alien” was the big break for Sigourney Weaver as it was her first lead role, and her character ended up as central to a whole set of sequels. The movie’s producers made a very conscious decision to cast a female in the lead role so as to have the film stand out in the male-dominated genre of science fiction. Famously, the film was publicized with the tagline “In space no one can hear you scream”.

22. Go caving : SPELUNK
Spelunking is an American term for caving, although the word has Latin roots (“spelunca” is the Latin for “cave”). The term originated in the 1940s in New England when it was adopted by a group of men who explored caves in the area.

26. Wife of Muhammad : AYESHA
Aisha (also”Ayesha”) was one of the wives of the prophet Muhammad. Aisha was the third of Muhammad’s eleven to thirteen wives, and was said to be his favorite.

28. Metaphor for diplomacy : CHESS GAME
It is believed that the game of chess originated in northwest India, evolving from a 6th-century game called “chaturanga”, a Sanskrit word meaning “four divisions”. These four (military) divisions were represented in the game:

52. Pre-coll. years : ELHI
“Elhi” is an informal word used to describe anything related to schooling from grades 1 through 12, i.e. elementary through high school.

Edgar Allan Poe lived a life of many firsts. Poe is considered to be the inventor of the detective-fiction genre. He was also the first notable American author to make his living through his writing, something that didn’t really go too well for him as he was always financially strapped. In 1849 he was found on the streets of Baltimore, delirious from either drugs or alcohol. Poe died a few days later in hospital at 39 years of age.

58. Main ingredient in pirates’ grog : RUM
Edward Vernon was a naval officer with the nickname “Old Grog”. In 1740, Vernon ordered that the daily ration of rum for his sailors should be watered down, in order to reduce discipline problems caused by drunkenness. The diluted rum was sweetened with sugar, and lemon or lime added to help preserve it on long voyages. This recipe, found to reduce scurvy among sailors (because of the citrus) spread throughout the Royal Navy, and “grog” was born.