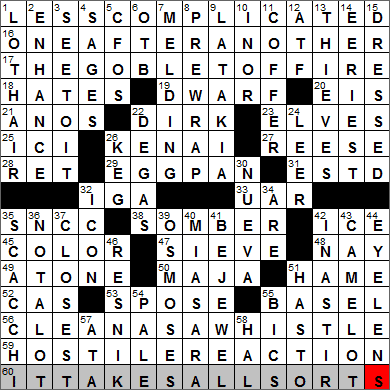 19. One of a familiar septet : DWARF
In the original Brothers Grimm fairy tale called “Snow White”, the seven dwarfs were not given any names. The names were added for the 1937 classic Disney film “Snow White and the Seven Dwarfs”. The seven dwarfs are:

22. Weapon in old hand-to-hand combat : DIRK
“Dirk” is the Scots word for dagger, and is the name given to a knife that is worn hanging from a belt in traditional dress that includes a kilt. The dagger worn in the sock isn’t a dirk (as is supposed by many) but rather is called a “sgian dubh”, “a black or hidden knife”.

25. “Vous êtes ___” : ICI
“Vous êtes ici” are important words to know when navigating your way around Paris. They mean “You are here”, and you’ll often see them on maps in the street.

32. Big Chicago-based franchiser : IGA
IGA stands for Independent Grocers Alliance, a chain of supermarkets that extends right around the world. IGA’s headquarters is in Chicago.

33. 1958-61 political alliance: Abbr. : UAR
The United Arab Republic (UAR) was a union between Egypt and Syria made in 1958 and dissolved in 1961 when Syria pulled out of the arrangement.

35. March on Washington grp. : SNCC
The Student Nonviolent Coordinating Committee (SNCC) was an organization that was very active in the Civil Rights Movement of the sixties. Apart from organizing protest events, the SNCC did a lot of work driving voter registration throughout the southern states.

38. Dirgelike : SOMBER
A “dirge” is a slow and mournful musical piece, like a funeral hymn.

48. And moreover : NAY
As in “this crossword was tricky, nay, really difficult”.

50. Goya figure : MAJA
Francisco Goya was a Spanish painter, often called the last of the Old Masters and the first of the moderns. Two of Goya’s most famous works are “The Nude Maja” and “The Clothed Maja”.

51. Part of a plowing harness : HAME
The part of a horse harness known as the horse collar is designed to spread the load when it is pulling something like a plow. The collar is reinforced with curved wooden or metal pieces called “hames”.

Hercule Poirot is Agatha Christie’s renowned detective, a wonderful Belgian who plies his trade from his base in London. Poirot’s most famous case is the “Murder on the Orient Express”.

6. Gambling inits. : OTB
Off-Track Betting (OTB) is the legal gambling that takes place on horse races outside of a race track. A betting parlor can be referred to as an OTB.

7. Putting one’s cards on the table, in a way : MELDING
“Melding” is a matching of cards that takes place in some card games, notably the rummy family.

9. Principal port of Syria : LATAKIA
Latakia is the fifth largest city in Syria, and the main port in the country.

13. Robin Hood and his Merry Men : THIEVES
Robin Hood is a figure from English folklore, celebrated in story and song. Some stories suggest that Robin Hood the outlaw was actually a real nobleman, the Earl of Huntington. Robin Hood’s famous companion was Maid Marian. Interestingly, the legend of Maid Marian (full name Lady Marian of Leaford) had been around for centuries before she became associated with Robin Hood starting in the 1700s.

22. “Portraits at the Stock Exchange” artist : DEGAS
Edgar Degas was a French artist, famous for his paintings and sculptures. Some of Degas’ most beautiful works feature female ballet dancers, and others depict women bathing.

32. Seattle’s Space Needle or St. Louis’s Gateway Arch : ICON
The famed Seattle landmark called the Space Needle was built for the 1962 World’s Fair. It stands at a height of 605 feet, and was once the tallest structure west of the Mississippi River.

The Gateway Arch in St. Louis is the tallest monument in the United States. It was designed by Eero Saarinenen, with the help of structural engineer Hannskarl Bandel. They did their design work back in 1947, but construction wasn’t started until 1963. In 1980, a daredevil took it upon himself to parachute onto the top of the arch intending to further jump from the apex of the arch and parachute to the ground. He hit the arch alright, and slid all the way down one of the arches to his death. No comment …

35. Greta of “The Red Violin” : SCACCHI
Greta Scacchi is an actress from Italy who now lives in Australia. Scacchi is popular on the European movie circuit as she is fluent in English, German , French and Italian.

“The Red Violin” is an interesting film released in 1998 that tells the story of a violin that passes through the hands of many owners over four centuries. The fictional violin was inspired by a real violin made by Antonio Stradivari called the 1721 Red Mendelssohn.

39. Seeps : OSMOSES
Osmosis is the movement of a solvent (often just water) across a semipermeable membrane. In the process of osmosis, the solvent tends to flow from an area of less concentration to an area of higher concentration. This sense of “absorbing” water effortlessly gives rise to the expression “learning by osmosis”.

“Ferris Bueller’s Day Off” is one of my favorite movies of all time, and was written and directed by John Hughes and released in 1986. There are so many classic scenes in the film, including two wonderful musical interludes. The more sedate of these is vignette shot in the Art Institute of Chicago that is beautifully filmed. The more upbeat musical scene is a rendition of “Twist and Shout” during a Von Steuben Day parade.

43. Broadway hit with the song “I Wonder What the King Is Doing Tonight” : CAMELOT
“Camelot” is a Lerner and Loewe musical based on the legend of King Arthur. The show was first shown on Broadway in 1960 and ran for 873 performances. “Camelot” was made into a very successful film version that was released in 1967 starring Richard Harris as King Arthur.

55. Inexpensive writing implements : BICS
Société Bic is a French company, based in Clichy in France. The first product the company produced, more than fifty years ago, was the Bic Cristal ballpoint pen that is still produced today. Bic also makes other disposable products such as lighters and razors.