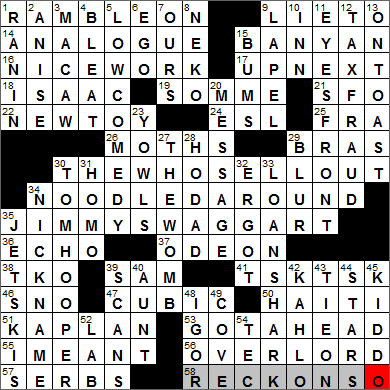 Today’s Wiki-est, Amazonian Googlies
Across
15. National tree of India : BANYAN
The banyan is a fig and germinates in cracks and crevices of a host tree and then sends roots down towards the ground. The roots that head down the the host give rise to a familiar name for the banyan, namely the strangler fig. The banyan tree is the national tree of India.

18. Singer who wrote : ISAAC
Isaac Bashevis Singer was a Jewish-American author from Poland who won the Nobel Prize in Literature in 1978. As well as being a much-respected author, Singer was a noted vegetarian, and featured the theme of vegetarianism in his some of his works. He was once asked if he had become a vegetarian for health reasons, to which he remarked “I did it for the health of the chicken”.

21. United hub, briefly : SFO
San Francisco International Airport (SFO) serves as the main base of operations for Virgin America, and is also the maintenance hub for United Airlines. SFO was the site of a 2013 crash of an Asiana Airlines Boeing 777 that resulted in three fatalities. My wife and I had flown into SFO 24 hours earlier. That tends to be sobering …

24. Accent reduction may be a subj. in it : ESL
English as a Second Language (ESL) is sometimes referred to as English for Speakers of Other Languages (ESOL) and English as a Foreign Language (EFL).

26. Unwelcome closet discovery : MOTHS
The larvae of several types of moth are noted for eating fabrics made from natural fibers such as wool or cotton. Many people store woolens in cedar chests believing that the scent of the wood prevents a moth infestation. In fact, the only known effective repellent is the naphthalene found in mothballs, which might be a health concern for humans. One way to kill moth larvae in fabric is to freeze the garment for several days at a temperature below 8 degrees centigrade.

29. Their sizes are measured in cups : BRAS
The word “brassière” is of course French in origin, but it isn’t the word the French use for what we know as a “bra”. In France what we call a bra is known as a “soutien-gorge”, translating to “held under the neck”. The word “brassière” is indeed used in France but there it describes a baby’s undershirt, a lifebelt or a harness. “Brassière” comes from the Old French word for an “arm protector” in a military uniform (“bras” is the French for “arm”). Later “brassière” came to mean “breastplate” and from there the word was used for a type of woman’s corset. The word jumped into English around 1900.

30. 1967 album that included “I Can See for Miles” : THE WHO SELL OUT
“I Can See for Miles” is the biggest selling single for the Who in the United States, although I doubt it is the track that is heard most often. Three songs from the Who are used as theme music for the three very successful CSI television series.

The Who’s hit “Who Are You” is used as the theme song for the TV show “CSI”. Old hits from the Who are also used as theme songs for the CSI spin-off shows, “CSI: New York” (theme: “Baba O’Riley”) and “CSI: Miami” (theme: “Won’t Get Fooled Again”). The Who played all three “CSI” songs during the halftime show at the 2010 Super Bowl.

34. Fiddled : NOODLED AROUND
Apparently “to noodle around” is to fiddle around with something.

35. “A Study in the Word” host : JIMMY SWAGGART
Jimmy Swaggart is a Pentecostal pastor and televangelist. Swaggarts weekly telecasts were hugely popular during the early eighties, but he fell from favor during the late eighties and early nineties when he was implicated in two sex scandals involving prostitutes.

In Ancient Greece an odeon (also odeum) was like a small theater, with “odeon” literally meaning a “building for musical competition”. Odea were used in both Greece and Rome for entertainments such as musical shows and poetry readings.

38. Round stopper, for short : TKO
In boxing, a knockout (KO) is when one of the fighters can’t get up from the canvas within a specified time, usually 10 seconds. This can be due to fatigue, injury, or the participant may be truly “knocked out”. A referee, fighter or doctor may also decide to stop a fight without a physical knockout, especially if there is concern about a fighter’s safety. In this case the bout is said to end with a technical knockout (TKO).

39. Merrie Melodies sheepdog : SAM
The Old English Sheepdog is the dog that seems to have hair everywhere. I always remember Sam Sheepdog from the Looney Tunes and Merrie Melodies cartoons, stoically guarding his flock.

46. ___ Brum (car accessory) : SNO
The SNO BRuM is sort of like a foam-padded mop with a telescopic handle that you can use to push snow off your car without scratching the vehicle’s paintjob.

50. Recipient of much 2010s humanitarian aid : HAITI
The capital city of Haiti is Port-au-Prince. The city was hit by a devastating earthquake in January of 2010. The official government estimate of the death toll stands at 230,000 people, with many bodies never recovered.

51. Giant in test prep : KAPLAN
Kaplan Inc. was founded in 1938 by Stanley Kaplan, who started out tutoring students for the New York State Regents Exam in the basement of his parents’ home in Brooklyn. He opened up locations for tuition around the country, and in 1984 sold the company to the Washington Post. Revenue for Kaplan was over 2½ billion dollars in 2009.

57. Largest minority in Croatia : SERBS
Serbs are an ethnic group native to the Balkans in southeastern Europe. Although Serbs exist as a minority group in many countries in the region, they are the majority ethnic group in Serbia, in Montenegro and in Bosnia and Herzegovina.

The Republic of Croatia is a Balkan country. The Croats declared independence from Yugoslavia in 1991.

Down
1. Took downtown : RAN IN
A police officer might arrest a suspect, take him downtown, run him in.

2. Jägermeister ingredient : ANISE
Jägermeister is a liqueur from Germany with a list of ingredients that includes 56 herbs, fruits, roots and spices. There is an urban legend that Jägermeister contains deer or elk blood, but that’s simply not true. “Jägermeister” translates as “master of hunters”. A drink that it is apparently quite popular with the younger set is a Jägerbomb, which is made by dropping a shot glass full of Jägermeister into a glass of Red Bull energy drink.

3. Talking pet : MACAW
Macaws are beautifully colored birds of native to Central and South America, and are actually a type of parrot. Most species of macaw are now endangered, with several having become extinct in recent decades. The main threats are deforestation and illegal trapping and trafficking of exotic birds.

6. Sacred thing, to Ayn Rand : EGO
The author Ayn Rand espoused what she called “rational egoism”, her view that it is irrational and immoral to act against one’s self-interest. Rand laid out the concept in depth in her 1964 collection of essays and papers titled “The Virtue of Selfishness: A New Concept of Egoism”.

8. Indie rocker Case : NEKO
Neko Case is an American singer-songwriter who is best known as a solo artist as well as a member of the indie rock group from Canada called the New Pornographers.

13. Down, in a diner : ON TOAST
Diner lingo, the verbal slang used by the staff, can be very colorful. Here are a few examples:

28. Certain beach phony : HODAD
“Hodad” is a slang term that dates from the fifties. It’s used to describe someone who hangs out at the beach, but someone who isn’t a surfer. Hodads were mainly into cars and music.

“The King’s Speech” is a wonderful, wonderful 2010 film about King George VI and his efforts to overcome his speech impediment. Colin Firth, Geoffrey Rush and Helena Bonham Carter all do fabulous jobs playing the lead characters. It is an independent film, so was made with a relatively low budget of $15 million, but grossed almost $400 million at box offices worldwide. It is the most successful British independent film of all time.

One of Ancient Rome’s leading lyric poets was Quintus Horatius Flaccus, or “Horace” as we tend to know him.

32. Field fungus : ERGOT
Ergot is a fungus, or actually a group of fungi, that cause disease in rye and related plants. If human eat ergot-contaminated grain, a condition called ergotism can result. Ergotism is the result of consumption of alkaloids produced by the fungi, alkaloids that can cause seizures and manic behavior. It has even been suggested that the hysteria exhibited by the Salem “witches” was perhaps caused by the ingestion of ergot-contaminated rye.

40. Dahlia in Wodehouse novels, e.g. : AUNT
P. G. Wodehouse’s Bertie Wooster, of the “Jeeves” series of novels, has two aunts that turn up quite often. Aunt Agatha is the least favorite aunt as she is quite fearsome and is always trying to get Bertie married off. Bertie refers to Aunt Agatha as the “nephew-crusher”. Agatha’s sister is Aunt Dahlia, who is much beloved by her nephew.

The English author P. G. Wodehouse is most famous for creating the characters Bertie Wooster and his valet Jeeves. The author’s full name was Sir Pelham Grenville Wodehouse.

42. Surrealist known for self-portraits : KAHLO
Frida Kahlo was a Mexican painter, famous for her self-portraits. She was married to the equally famous artist Diego Rivera. Kahlo was portrayed by the actress Salma Hayek in a film about her colorful life called “Frida” released in 2002.

48. One who has a hunch : IGOR
Igor has been the assistant to Dracula, Frankenstein and Young Frankenstein among others. Igor is almost invariably portrayed as a hunchback.

54. Classic Bogart role, in slang : TEC
“Tec” is a slang term for a private detective, a private investigator (PI).