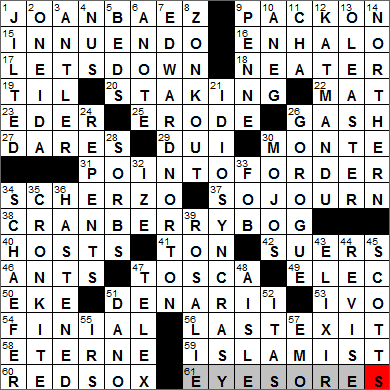 Today’s Wiki-est, Amazonian Googlies
Across
1. “Diamonds and Rust” singer, 1975 : JOAN BAEZ
Joan Baez is an American folk singer and a prominent activist in the fields of nonviolence, civil rights, human rights and environmental protection. Baez has dated some high-profile figures in her life including Bob Dylan, Steve Jobs (of Apple) and Mickey Hart of the Grateful Dead.

15. “Is that a gun in your pocket, or are you just happy to see me?,” e.g. : INNUENDO
Comic actress Mae West can be quoted so easily, as she had so many great lines delivered so well. Here are a few:

23. River of Hesse : EDER
The Eder is a river in Germany, a tributary of the Fulda River. The Eder has a dam near the small town of Waldeck which holds water in the large Edersee reservoir. This was one of the dams that was attacked by the RAF during WWII with the famous Barnes Wallis bouncing bombs. It was destroyed in the Dam Busters raid in 1943, but rebuilt the same year.

29. Cause of an insurance increase, for short : DUI
In some states, there is no longer a legal difference between a DWI (Driving While Intoxicated) and a DUI (Driving Under the Influence). Other states retain that difference, so that by definition a DUI is a lesser offence than a DWI.

34. Part of many a symphony : SCHERZO
A “scherzo” is often the third movement in a larger work such as a sonata or symphony. It is usually a fast, light-hearted composition, with the name “scherzo” translating from Italian as “jest”.

38. Many a Cape Cod locale : CRANBERRY BOG
When early European settlers came across red berries growing in the bogs of the northern part of America, they felt that the plant’s flower and stem resembled the head and bill of a crane. As such, they called the plant “craneberry”, which later evolved into “cranberry”.

46. H. G. Wells’s “Empire of the ___” : ANTS
The full name of the English author known as H. G. Wells was Herbert George Wells. Wells is particularly well known for his works of science fiction, including “The War of the Worlds”, “The Time Machine”, “The Invisible Man” and “The Island of Doctor Moreau”. He was a prolific author, and a prolific lover as well. While married to one of his former students with whom he had two sons, he also had a child with writer Amber Reeves, and another child with author Rebecca West.

47. Teatro Costanzi premiere of 1900 : TOSCA
Unlike so many operas, “Tosca” was a big hit right from day one, when it was first performed in 1900 at the Teatro Costanzi in Rome. “Tosca” is currently the eighth-most performed opera in America, although I’ve only seen it once myself.

51. New Testament money : DENARII
The denarius (plural “denarii”) is a small silver coin that was used in Ancient Rome. Derived from the Latin “deni” meaning “containing ten”, a denarius had the value of ten asses. Today’s “dinar” is a common coin in the Arab world and is named for the old Roman coin. The dinar name was chosen in the days when Arabs were conquering large swathes of the old Roman Empire.

53. ___ Andric, Literature Nobelist before John Steinbeck : IVO
Ivo Andrić was a novelist from former Yugoslavia who won the 1961 Nobel Prize for Literature.

59. Former Egyptian president Mohamed Morsi, for one : ISLAMIST
Mohamed Morsi was the first democratically elected leader of the Egypt, taking power in 2012. However, Morsi was removed from office just over a year later in a 2013 coup d’état after he granted himself relatively unlimited powers, leading to a popular revolution.

60. Team whose playing venue appears on the National Register of Historic Places : RED SOX
The Boston Red Sox is one of the most successful Major League Baseball teams and so commands a large attendance, but only when on the road. The relatively small capacity of Boston’s Fenway Park, the team’s home since 1912, has dictated that every game the Red Sox has played there has been a sell-out since May of 2003.

Down
1. Dumped : JILTED
To “jilt” someone with whom you have a relationship is to drop them suddenly or callously. “Jilt” is an obsolete noun that used to mean “harlot” or “loose woman”.

2. Six Nations tribe : ONEIDA
The Oneida people originally lived in the area that is now Central New York. The Oneida were one of the five founding nations of the Iroquois Confederacy, also known as the Five Nations (the Mohawk, Oneida, Onondaga, Cayuga and Seneca).

4. Greek consonants : NUS
The Latin equivalent of the Greek letter nu is “N”. An uppercase nu looks just like the Latin capital N, however, the lowercase nu looks like our lowercase “v”. Very confusing …

7. Best Actor nominee for “American History X” : EDWARD NORTON
Edward Norton is a Hollywood actor who was nominated for Oscars for his performances in 1996’s “Primal Fear” (his debut film) and 1998’s “American History X”. I haven’t seen either movie, but really enjoyed him as the villain in “The Italian Job” (2003) and as the title character in “The Illusionist” (2006).

9. Cylindrical pasta : PENNE
Cylindrical pasta is known in general as “penne”, and there are many variants. For example, ziti is a particularly large and long tube with square-cut ends. “Penne” is the plural of “penna”, the Italian for “feather, quill”.

12. Asian capital : KATMANDU
Although Kathmandu is the capital city of the lofty nation of Nepal, it sits in a bowl-shaped valley so is only at an elevation of 4,600 ft. Air pollution is a huge problem in the city. Industry and residents launch a lot of smog into the air, and given the surrounding geography and climate, any pollution blown away during the day tends to fall back into the valley at night.

13. Wild olive : OLEASTER
The wild-olive is the species of olive tree that was used by the Ancient Greeks to fashion the olive wreaths awarded at the original Olympic Games.

14. Boreal : NORTHERN
The adjective “boreal” means “northern”, as in “aurora borealis” for example. The term comes from “Boreas”, the Greek god of the north wind.

21. Kojak’s love of lollipops or Reagan’s love of jellybeans, e.g. : IDIOSYNCRASY
“Kojak” is a fun police drama that had an original run on TV from 1973 to 1978. The title character was NYPD Detective Lieutenant Theo Kojak, played by Telly Savalas. Famously, Kojak sucks away on lollipops as he tries to quit cigarettes. Kojak is assisted in his cases by Sergeant “Fatso” Stavros, a character played by George Savalas, Telly’s younger brother.

President Ronald Reagan started eating jelly beans in 1966 when he was Governor of California. The candy was an important part of the governor’s successful plan to give up pipe-smoking. When Reagan was elected president, three and a half tons of red, white and blue jelly beans were sent to Washington for the inaugural events of 1981.

33. Time keeper? : FOB
A fob is attached to another object to make access to it easier. And so a key fob is a chain attached to a key so that it can be retrieved easily. There are also watch fobs, of course.

35. First person outside NASA to receive a moon-rock award, 2006 : CRONKITE
The broadcast journalist Walter Cronkite was the anchor of the “CBS Evening News” for 19 years, from 1962 to 1981. Cronkite’s famous sign-off line was “And that’s the way it is …” Cronkite made many famous broadcasts, including coverage of the assassination of President John F. Kennedy and the Moon landings. Cronkite was so closely associated with the Apollo space missions that he was presented with a Moon rock, making him the only non-NASA person to be so honored.

39. 1937 film based on a Gershwin musical : ROSALIE
“Rosalie” is a musical written in 1928 by George Gershwin (and others). In 1937, MGM made a film adaptation of the original musical, replacing most of the score though with new songs written by Cole Porter.

43. ___ of life : ELIXIR
An elixir is a solution of alcohol and water that is used to deliver a medicine. The term “elixir” can also be used to mean a medicine that has the power to cure all ills.

45. Nursery brand : SCOTTS
Scotts Miracle-Gro Company was founded in 1868 by one Orlando Scott, initially selling seed to the agricultural industry. In the early 1900s, Scotts started to sell to homeowners, mainly supplying lawn seed. The company merged with the gardening company Miracle-Gro in 1955.

47. Bringer of old news : TELEX
Telex grew out of the world of the telegraph. What Telex brought to telegraphy was the ability to route messages. Instead of having to talk to an operator to route a particular message to the intended party, the user of a telex could route the message directly to another telex machine by way of a rotary dial, very similar to that on a telephone.

51. Longtime soap actress Linda : DANO
Linda Dano is an actress known for her work in daytime soap operas, including “One Life to Live” (as Gretel Cummings), “As the World Turns” (as Cynthia Haynes) and “Another World” (as Felicia Gallant).

55. Group awaiting one’s return, for short : IRS
The Internal Revenue Service (IRS) was set up during the Civil War to raise money to cover war expenses. Prior to the introduction of income tax in 1862, the government was funded by levies on trade and property.

57. Some rock : EMO
The musical genre of “emo” originated in Washington D.C. in the 80s, and takes its name from “emotional hardcore”. Not my cup of tea …