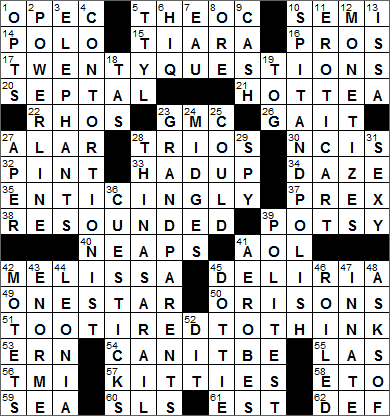 CROSSWORD SETTER: Timothy Polin
THEME: Twenty Questions … in honor of the classic game show “Twenty Questions”, we have twenty themed clues today, all of them questions with the format “What …?”. And, look at that lovely question mark drawn with black squares in the grid:

Today’s Wiki-est, Amazonian Googlies
Across
1. What group founded in 1960 currently has 12 members? : OPEC
The Organization of the Petroleum Exporting Countries (OPEC) was founded in 1960 at a conference held in Baghdad, Iraq that was attended by Iraq, Kuwait, Iran, Saudi Arabia and Venezuela. Nine more countries joined the alliance soon after, and OPEC set up headquarters in Geneva, Switzerland and then Vienna, Austria in 1965. The basic aim of OPEC was to wrench control of oil prices from the oil companies and to put it in the hands of the sovereign states that own the natural resource.

14. What sport has divisions called chukkers? : POLO
A game of polo is divided into periods of play called chukkers (sometimes “chukkas”). The game usually lasts for two hours, and the time between the chukkers is used to change horses.

17. Classic 1940s-’50s quiz show : TWENTY QUESTIONS
The parlor game of Twenty Questions originated in the US and really took off in the late forties as it became a weekly quiz show on the radio. Am I the only one who thinks that there aren’t enough quiz shows on the radio these days? I have to resort to listening to the BBC game shows over the Internet …

22. What are Greek P’s? : RHOS
Rho is the Greek letter that looks just like our Roman letter “p”.

23. What automaker makes the Yukon and Acadia? : GMC
GMC is a division of General Motors (GM) established in 1901 that started out as “GMC Truck”.

The GMC Acadia is an SUV made by General Motors that was introduced in 2006.

27. What is the popular name for daminozide? : ALAR
The chemical name for Alar, a plant growth regulator and color enhancer, is daminozide. Alar was primarily used on apples but was withdrawn from the market when it was linked to cancer.

28. The Police and others : TRIOS
The Police was a trio formed in London in 1977, with Sting being the most famous member and the lead singer.

30. CBS procedural : NCIS
NCIS is the Naval Criminal Investigative Service, which investigates crimes in the U.S. Navy and Marine Corps. The service gives its name to the CBS TV show “NCIS”, a spin-off drama from “JAG” in which the main “NCIS” characters were first introduced. The big star in “NCIS” is the actor Mark Harmon.

32. What do four gills make? : PINT
A gill is a unit of volume really only used these for measuring out alcoholic spirits. A gill is one quarter of pint, so a US gill is 4 fluid ounces, and an imperial gill is 5 fluid ounces.

33. Invited to one’s penthouse, say : HAD UP
Originally, the term “penthouse” was used to describe a modest building attached to a main structure. In fact, in centuries past, the manger in which Jesus was born was often referred to as a penthouse. The modern, more luxurious connotation dates back to the early twenties.

35. À la a siren : ENTICINGLY
In Greek mythology, the Sirens were seductive bird-women who lured men to their deaths with their song. When Odysseus sailed closed to the island home of the Sirens he wanted to hear their voices, but in safety. He had his men plug their ears with beeswax and then ordered them to tie him to the mast and not to free him until they were safe. On hearing their song Odysseus begged to be let loose, but the sailors just tightened his bonds and and the whole crew sailed away unharmed.

37. School head, slangily : PREX
“Prexy” (and “prex”, I guess) is a slang term for the president of a college or university.

39. What is hopscotch called in New York City? : POTSY
Hopscotch is a game that we used to play all the time as kids. We used to draw the hopscotch “court” onto a concrete surface using chalk. The marker we’d use to throw into the court was usually an empty tin that had contained shoe polish, which we’d fill with stones to give it some weight. It is said that hopscotch has been played by kids as far back as ancient Rome. The name of the game comes from the hopping that players do on the court, and the word “scotch” meaning “incised line or scratch”. The same game is known locally on the streets of New York City as “potsy”. I have no idea why …

41. What company owns MapQuest? : AOL
MapQuest is a very popular Internet site, one that provides driving directions and maps. MapQuest is actually owned by AOL.

42. What notorious 1999 computer virus was named after an exotic dancer? : MELISSA
The Melissa computer virus was inflicted on the world by David L. Smith of Aberdeen Township in New Jersey in 1999. Smith apparently named the virus after an exotic dancer from Florida. Melissa is sent as an email attachment, disguising itself as a document. Once the email recipient opens the document, the virus replicates and sends itself to the first 50 people listed in the recipient’s email contact list. Smith was caught by the FBI and pleaded guilty to charges, resulting in him serving 20 months of a 10-year prison sentence.

49. What rating does the Michelin Guide give to “a very good restaurant”? : ONE STAR
Michelin is a manufacturer of tires based in France. The company was founded by brothers Édouard and André Michelin in 1888. The brothers were running a rubber factory at the time, and invented the world’s first removable pneumatic tire, an invention that they used to launch their new company. Michelin is also noted for rating restaurants and accommodation in its famous Michelin Travel Guides.

50. Sacred petitions : ORISONS
Orison is another word for prayer, that comes to us ultimately from Latin, via Middle English and Old French.

55. ___ Palmas, Spain : LAS
Gran Canaria, or Grand Canary Island, may be grand but it isn’t quite as big as Tenerife, the largest island of the group and the most populated. The capital of Gran Canaria is Las Palmas, which was a port of call for Christopher Columbus in 1492 on his way to the Americas.

56. Response to an oversharer : TMI
Too much information (TMI)

57. Pots : KITTIES
The “pot” in a card game has been referred to as the kitty since the 1880s. It’s not certain how the name “kitty” evolved but possibly it came from “kit”, the necessary equipment for the game.

60. Mercedes roadsters : SLS
The Mercedes-Benz SL was first manufactured in 1954. The “SL” stands for Sport Leicht, or “Sport Light” in English.

61. “Scientia potentia ___” : EST
The phrase “scientia potentia est” is translated colloquially from Latin as “knowledge is power”. The phrase is often attributed to English philosopher Sir Francis Bacon, but there is no evidence that he used the words. The first known record of the phrase appearing in print was in a 1651 work called “Leviathan” by Thomas Hobbes, who had served as secretary to Bacon as a young man.

Down
3. What do mahouts ride? : ELEPHANTS
A mahout is someone who rides an elephant that has been tamed and is used for work. Mahouts are often chosen as boys, perhaps because their father had the same profession. The young mahout is assigned a young elephant to work with, and the partnership can last a lifetime.

5. What best-selling 2004 young adult novel was written entirely in the form of instant messages? : TTYL
“ttyl” is a 2004 book by Lauren Myracle, and is a very modern form of the classic epistolary novel.The who whole work is formatted as instant message conversations. “ttyl” is texting slang for “talk to you later”.

9. Carry’s partner : CASH
The term “cash and carry” implies that goods are sold for cash and no delivery service is supplied.

13. What California congressman heads the House Oversight Committee? : ISSA
Darrell Issa is a Republican Representative in the US House, representing a district in Southern California. Issa was a successful businessman before taking his seat, and is now the wealthiest member of Congress.

19. Dress smartly, with “out” : TOG
The verb “tog”, meaning to dress up, comes from the Latin “toga”. “Tog” can be use as an informal word for a coat or a cloak. Back in Ireland, togs are what we call swimming shorts.

24. Tiny pests : MIDGES
“Midge” is a familiar term used for many different kinds of small flies.

29. What was Caleb in the Bible? : SPY
According to the Bible, after fleeing Egypt the Hebrews were led by Moses to the promised land of Canaan. Moses sent twelve spies into Canaan (one from each of the Twelve Tribes) to report on what awaited them. Ten spies returned with exaggerated stories of giants who would kill the Hebrew army if it entered Canaan. Two spies, Caleb and Joshua, came back with valid reports, that the Hebrews could inhabit the area. As a result of the false reports from the ten spies, the Hebrews did not enter Canaan but instead wandered the desert for another forty years, before they finally took up residence in the promised land. At the end of the forty years, Caleb and Joshua were the only adults that survived the forty-year journey, a reward from God for their obedience.

36. Ones with breaking points? : CUE STICKS
One hits the cue ball with the point of one’s cue to make a break in a game of billiards.

41. Oxygen users : AEROBES
An aerobe is an organism that lives in an environment rich in oxygen. An anaerobe on the other hand does not require oxygen for survival.

42. Sacred pieces : MOTETS
A motet is a simple musical composition based on a sacred text, usually sung without an accompaniment. The term “motet” is a diminutive of the French for “word” … “mot”.

44. Neighbor of Teaneck, N.J. : LEONIA
Leonia, New Jersey is a borough located near the western approach to the George Washington Bridge over the Hudson River. The name “Leonia” was chosen in 1865 in honor of General Charles Lee who fought in the Revolutionary War.

52. Morse bit : DIT
Dahs and dits are the sound equivalents of dashes and dots of Morse Code. Samuel Morse didn’t invent Morse code, but it took his name because it was invented for use on the electric telegraph invented by him.