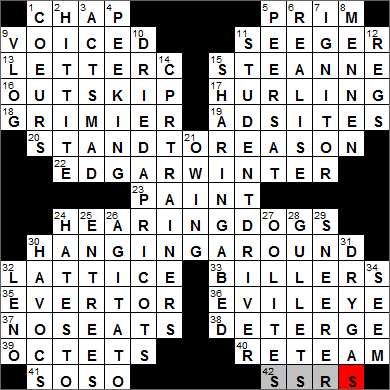 Today’s Wiki-est, Amazonian Googlies
Across
1. Bloke : CHAP
“Chap” is an informal term for “lad, fellow”, especially in England. The term derives from “chapman”, an obsolete word meaning “purchaser” or “trader”.

11. Big name in folk music : SEEGER
The American folk singer Pete Seeger wrote and co-wrote a lot of classic songs. The list includes “Where Have All the Flowers Gone?”, “If I had a Hammer”, and “Turn, Turn, Turn!”

13. Cubs cap display : LETTER C
The Chicago Cubs is one of only two charter members of the baseball’s National League who are still playing, the other being the Atlanta Braves. The Cubs last won the World Series in 1908, which is a long time ago. In fact, the Cubs have the longest championship drought of any professional sports team in North America.

15. Patroness of Québec : STE ANNE
In the Christian and Muslim traditions, Saint Anne was the mother of Mary and hence grandmother of Jesus Christ. Saint Anne is the patroness of unmarried women, housewives, women in labor and grandmothers. She is also the patron saint of Santa Ana, California and Quebec, Canada.

17. It’s said to be the world’s fastest field sport : HURLING
Hurling is the national sport of my homeland of Ireland. It’s played with a stick called a hurley and a ball called a sliotar. It’s thought to be the fastest team sport in the world, and certainly has to be the oldest as it predates Christianity and was brought to Ireland by the Celts.

19. Craigslist and others : AD SITES
Craigslist is an online network of communities that features classified advertisements organized geographically. Craigslist was started by Craig Newmark in 1995, originally as an email distribution list for his friends who lived and worked in the San Francisco Bay Area.

22. Rocker with the 1973 #1 hit “Frankenstein” : EDGAR WINTER
Edgar Winter is a singer and multi-talented instrumentalist. He played in the seventies with his band, The Edgar Winter Group. Winter is an albino, and so has no pigment in his skin hair and eyes.

23. Spotted horse : PAINT
“Paint” is another name used for a pinto horse.

A “pinto” is a horse with patchy markings of white mixed with another color. “Pinto” means “painted” in American Spanish.

35. Muscle that rotates a part outward : EVERTOR
“Evertor” is the name given to any muscle that turns a part of the body outwards. An example of “eversion” would be the movement of the sole of the foot outwards, away from its resting position.

42. Georgia and neighbors, once: Abbr. : SSRS
The former Soviet Socialist Republic (SSR) of Georgia is now an independent country. Supposedly, the Georgian people were given their name because they especially revered St. George. The flag of Georgia does indeed feature five St. George’s crosses.

Down
2. Member of an ancient people known for warfare with chariots : HITTITE
The HIttites were a people living in Ancient Anatolia (Asia Minor) during the Bronze Age. The Hittite military is noted for the early use of chariots, the design of which can be seen in some Ancient Egyptian drawings.

6. “It is through Art, and through Art only, that we can ___ our perfection”: Oscar Wilde : REALISE
If you didn’t know Oscar Wilde was Irish, you will when you see the name he was given at birth: Oscar Fingal O’Flahertie Wills Wilde!

8. Speed Stick brand : MENNEN
The Mennen Speed Stick was the leading deodorant for men for many years. The Mennen Company was founded by Gerhard Mennen in Newark, New Jersey in 1878.

9. Certain YouTube posting : VLOG
A video blog is perhaps what one might expect, a blog that is essentially a series of video posts. The term “video logging” is often shortened to “vlogging”.

25. Menu heading : ENTREES
Entrée of course means “entry” in French. An entrée can be something that helps one get “a way in”, an interview for example perhaps helped along by a recommendation letter. In Europe, even in English-speaking countries, the entrée is the name for the “entry” to the meal, the first course. I found it very confusing to order meals when I first came to America!

26. Hurriedly, in scores : AGITATO
Agitato is a musical direction seen on scores occasionally, and it means “agitated”. The instruction is to play in a restless, agitated style.

27. Sedimentary rocks resembling cemented fish roe : OOLITES
Oolite is a sedimentary rock also called egg stone. Indeed, the term “oolite” comes from the Greek “ooion” meaning egg. The rocks are often round and white (hence the name) and are composed of calcium carbonate.

29. Elvis Presley, notably : SNEERER
Elvis Aron Presley was the younger of two identical twins. His brother was stillborn, delivered 35 minutes before Elvis. The brother was named Jesse Garon Presley. So though born a twin, Elvis was raised as an only child.

31. Fuel line additive : DRY GAS
Dry gas is an additive used to prevent fuel from freezing by absorbing any water present and keeping it in solution. Dry gas is mainly an alcohol, and it is the alcohol that absorbs the water. A lot of gasoline that we buy at the pump already contains 10-15% ethanol,in which case dry gas isn’t beneficial. The term “dry gas” comes from the brand name “Drygas”.

32. One side of a famous NBC feud : LENO
The so called “War for Late Night” of 2010 involved Conan O’Brien and Jay Leno. O’Brien had stayed loyal to NBC on the understanding that he would take over “The Tonight Show” after Jay Leno retired. When Leno’s contract expired in 2009, NBC moved Leno aside, with his agreement, and O’Brien took over. But Leno then hosted a new spot in prime time called “The Jay Leno Show”, and apparently the two shows split the traditional late night audience, much to the annoyance of advertisers. NBC reacted by moving Leno back to the late night slot, and mayhem ensued!