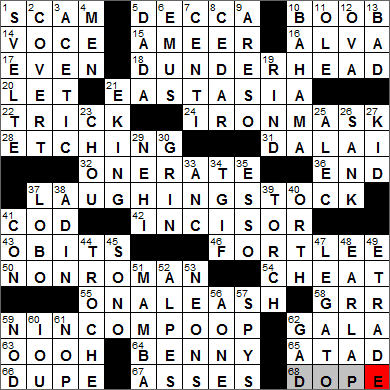 CROSSWORD SETTER: Gary J. Whitehead
THEME: They’re First in April … today’s themed answers are all words or phrases meaning “fool”, which is apt given that today is April Fools Day:

Today’s Wiki-est, Amazonian Googlies
Across
5. Classic record label : DECCA
Decca Records started out in 1929 as a British record label. The US branch of Decca was opened up in 1934, but the UK and US entities went their separate ways starting in WWII.

14. Sotto ___ (under one’s breath) : VOCE
Sotto voce literally means “under the voice” in Italian, and describes the deliberate lowering of one’s voice for emphasis.

15. Mideast potentate: Var. : AMEER
An emir is a prince or chieftain, most notably in the Middle East. In English, “emir” can also be written as “amir” and “ameer” (watch out for those spellings in crosswords!).

16. The “A” in Thomas A. Edison : ALVA
Thomas Alva Edison was nicknamed “The Wizard of Menlo Park” by a newspaper reporter, a name that stuck. He was indeed a wizard, in the sense that he was such a prolific inventor. The Menlo Park part of the moniker recognizes the location of his first research lab, in Menlo Park, New Jersey.

24. Facial cover in a Dumas novel : IRON MASK
“The Man in the Iron Mask” is the third part of a novel by Alexandre Dumas called “The Vicomte of Bragelonne: Ten Years Later”. The novel uses characters appearing in the earlier Dumas novel “The Three Musketeers”. In the plot, the musketeers are getting on in years and become involved in the mystery of “the man in the iron mask”, an prisoner locked up in French jails with his identity hidden behind a mask.

28. Many an Albrecht Dürer piece of art : ETCHING
Albrecht Dürer was a German artist, noted for his etchings and engravings as well as for his paintings.

31. ___ Lama : DALAI
The Dalai Lama is a religious leader in the Gelug branch of Tibetan Buddhism. The current Dalai Lama is the 14th to hold the office. He has indicated that the next Dalai Lama might be found outside of Tibet for the first time, and may be female.

41. New England catch : COD
In the British Isles, the most common fish that is used in traditional “fish and chips” is Atlantic cod. Cod has been overfished all over the world, and is now considered to be an endangered species by many international bodies.

43. Death notices, informally : OBITS
“Obituary” comes from the Latin “obituaris”, originally the record of the death of a person, although the literal meaning is “pertaining to death”.

46. New Jersey city on the west side of the George Washington Bridge : FORT LEE
Fort Lee, New Jersey is located at the western side of the George Washington Bridge that spans the Hudson River. Fort Lee is known as the birthplace of the motion picture industry. The world’s first movie studio was built there by Thomas Edison, a facility known as the Black Maria.

59. Fool : NINCOMPOOP
The word “nincompoop” meaning an “ass” seems to have been around for quite a while, since the 1670s, but no one appears to know its origins.

64. Comic Jack of old radio and TV : BENNY
The great comedian Jack Benny’s real name was Benjamin Kubelsky. Benny was born in 1894 and passed away in 1974 at the age of 80. Although, when Benny was on stage he always claimed to be just 39 years old!

Down
1. Gracefully slender : SVELTE
“Svelte” comes into English from Latin, via the Italian “svelto” meaning “stretched out”. As if I would know anything about svelte …

2. Like C.I.A. operations : COVERT
The Central Intelligence Agency (CIA) is the successor to the Office of Strategic Services (OSS) formed during WWII. The CIA was chartered by the National Security Act of 1947.

5. 1910s-’20s art movement : DADA
Dadaism thrived during and just after WWI, and was an anti-war, anti-bourgeois and anti-art culture. The movement began in Zurich, Switzerland started by a group of artists and writers who met to discuss art and put on performances in the Cabaret Voltaire, frequently expressing disgust at the war that was raging across Europe.

9. “You ___ Beautiful” : ARE SO
“You Are So Beautiful” is a song written by Dennis Wilson and Billy Preston, first recorded by Preston in 1974. Later the same year, Joe Cocker recorded a slower version of the song that was to become more successful than the original.

10. Grand ___ (vacation island near Florida) : BAHAMA
Grand Bahama is the largest island in the Bahamas chain. Grand Bahama lies only 56 miles off the coast of Florida. The Spanish gave the island the name of “Gran Bajamar”, which means “Great Shallows”.

11. “Bravo!” to a torero : OLE
“Toreador” is an old Spanish word for a bullfighter, but it’s a term not used any more in Spain nor in Latin America. In English we use the term “toreador”, but in Spanish a bullfighter is a “torero”.

23. China’s ___ En-lai : CHOU
Zhou Enlai (also Chou En-Lai) was the first government leader of the People’s Republic of China and held the office of Premier from 1949 until he died in 1976. Zhou Enlai ran the government for Communist Party Leader Mao Zedong, often striking a more conciliatory tone with the West than that of his boss. He was instrumental, for example, in setting up President Nixon’s famous visit to China in 1972. Zhou Enlai died just a few months before Mao Zedong, with both deaths leading to unrest and a dramatic change in political direction for the country.

25. Actor Guinness : ALEC
Sir Alec Guinness played many great roles over a long and distinguished career, but nowadays is best remembered for playing the original Obi-Wan Kenobi in “Star Wars”.

29. Classic soda brand : NEHI
The brand of Nehi cola has a name that sounds like “knee-high”, a measure of a small stature. Back in the mid-1900’s, the Chero-Cola company that owned the brand went for a slightly different twist on “knee-high” in advertising. The logo for Nehi was an image of a seated woman’s stockinged legs, with her skirt pulled up to her knees, to hint at “knee-high”.

As a young man, Nelson Mandela led the armed wing of the African National Congress (ANC). Mandela was eventually arrested and admitted to charges of sabotage and was sentenced to life in prison in 1964. He remained behind bars for 27 years, mainly in the infamous prison on Robben Island. As the years progressed, Mandela became a symbol of the fight against apartheid. He was released in 1990, and immediately declared his commitment to peace and reconciliation with South Africa’s white minority population. Mandela was elected president of the Republic of South Africa (RSA) in 1994, an office that he held until 1999.

34. End-of-workweek cry : TGIF
“Thank God It’s Friday” (TGIF) is a relatively new expression that originated in Akron, Ohio. It was a catchphrase used by disk jockey Jerry Healy of WAKR in the early seventies.

35. “Happy Motoring” gas brand : ESSO
The brand name Esso has its roots in the old Standard Oil company as it uses the initial letters of “Standard” and “Oil” (ESS-O). The Esso brand was replaced by Exxon in the US, but ESSO is still used in many other countries.

38. Score after deuce : AD IN
In tennis, if the score reaches “deuce” (i.e. when both players have scored three points), then the first player to win two points in a row wins the game. The player who wins the point immediately after deuce is said to have the “advantage”. If the player with the advantage wins the next point then that’s two in a row and that player wins the game. If the person with the advantage loses the next point, then advantage is lost and the players return to deuce and try again. If the one of the players is calling out the score then if he/she has the advantage then that player announces “ad in” or more formally “advantage in”. If the score announcer’s opponent has the advantage, then the announcement is “ad out” or “advantage out”. Follow all of that …?

44. Throat lozenge : TROCHE
A troche is a medicinal lozenge, like a pastille, and is usually circular in shape. “Troche” ultimately derives from the Greek word for “wheel”.

45. Pic of an unborn child : SONO
A sonogram is an image made created using ultrasound. “Ultrasound” is the name given to sound energy that has frequencies above the audible range.

47. Smoothly, in music : LEGATO
Legato is a musical direction, signifying that long and continuous notes should be played very smoothly. The opposite of legato is staccato, notes played in a disconnected form.

48. Winter hat part : EARLAP
Earlaps (or ear flaps) might be attached to a cap.

49. Online investor’s site : E*TRADE
E*Trade is mainly an online discount brokerage. It was founded in 1982 in Palo Alto, California, and I used to drive by its headquarters almost every day. The company is now run out of New York City. E*Trade produces those famous Super Bowl ads with the talking babies staring into a webcam.

51. Venomous African snake : MAMBA
The mamba, and most famously the black mamba, is a highly venomous snake that used to be responsible for a great number of fatalities before anti-venoms became available. Mamba venom is a deadly mix of neurotoxins that attack the nervous system, and cardiotoxins that attack the heart so a bite, if left untreated, causes the lungs and the heart to shut down.

53. Ad lights : NEONS
The basic design of neon lighting was first demonstrated at the Paris Motor Show in 1910. Such lighting is made up of glass tubes containing a vacuum into which has been introduced a small amount of neon gas. When a voltage is applied between two electrodes inside the tube, the neon gas “glows” and gives off the familiar light.

57. 1974 Gould/Sutherland C.I.A. spoof : S*P*Y*S
“S*P*Y*S” is a 1974 comedy starring Elliott Gould and Donald Sutherland as two men mistaken as spies and targeted by the KGB. With all those asterisks in the film’s title, one has to assume the movie was intended to capitalize on the success of the 1970 Gould/Sutherland vehicle called “M*A*S*H”.

62. ___ about (wander) : GAD
“To gad about” is to move around with little purpose. The word comes from the Middle English “gadden” meaning “to hurry”.