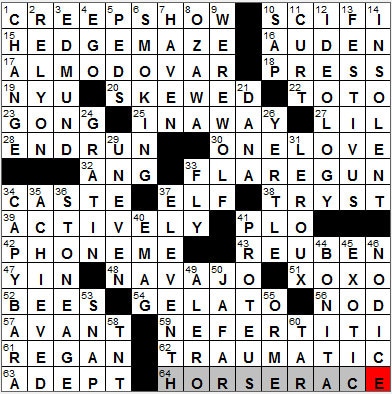 CROSSWORD SETTER: Josh Knapp
THEME: None
COMPLETION TIME: Did not finish
ANSWERS I MISSED: Too, too many!


Today’s Wiki-est, Amazonian Googlies
Across
1. 1982 Stephen King horror film : CREEPSHOW
“Creepshow” is a 1982 horror film written by Stephen King (so I won’t be watching it!). The film is actually a collection of five different stories, loosely tied together. The “link” in the storyline is provided by a young boy named Billy who is reading horror comics. Billy is played by Joe King, Stephen King’s own son.

16. Poet who wrote “All pity is self-pity” : AUDEN
The noted poet W. H. Auden was born and raised in England, but eventually became a US citizen. As well as hundreds of poems, Auden also wrote librettos for operas, including Igor Stravinsky’s “The Rake’s Progress”.

17. “Talk to Her” director/screenwriter, 2002 : ALMODOVAR
Pedro Almodovar is a very successful Spanish film director, born in a small town in the region of La Mancha (made famous by Don Quixote). I’m afraid I don’t recognize any of his films.

19. Sch. that Theo Huxtable attended on “The Cosby Show” : NYU
New York University (NYU) is comprised of fifteen schools, one of which it the Tisch School of the Arts. The Tisch is famous for its acting program, with notable alumni such as Debra Messing, Christopher Guest and Josh Radnor.

Malcolm-Jamal Warner was the child actor who played Theo Huxtable on “The Cosby Show”. You can see the grown-up Warner today playing Dr. Alex Reed on the BET sitcom “Reed Between the Lines”.

22. Noted dark film star of the 1930s : TOTO
There was an Italian actor with the stage name Totò, who did play some dramatic roles during the 1930s, but I think the reference here is to the dog in 1939’s “The Wizard of Oz”. Toto was the name of the Dorothy’s dog in the film. Toto was played a dog called Terry, but Terry’s name was soon changed to Toto in real life, due to the success of the film.

30. Classic 1977 song with the repeated line “Let’s get together and feel all right” : ONE LOVE
“One Love” is a classic reggae song from 1977 recorded by Bob Marley and the Wailers. A ska version of “One Love” had been released by the Wailers as early as 1965, but it is the 1977 release that we all remember, I am sure.

32. ___ Lee : ANG
Taiwanese director Ang Lee sure has directed a mixed bag of films, mixed in terms of genre but not in terms of quality. He was at the helm for such classics as “Sense & Sensibility” (my personal favorite), “Crouching Tiger, Hidden Dragon”, “Hulk”, and “Brokeback Mountain”.

33. Marooned person’s aid : FLARE GUN
The most commonly used flare gun was invented by an American naval officer, called Edward Wilson Very. He put his name to his invention (from the late 1800s), so we often hear the terms Very pistol, Very flare (and maybe even Very “light”!). A Very pistol is indeed a gun, with a trigger and a hammer that’s cocked and can be reloaded with Very flares.

34. Shudra, for one : CASTE
Historically, in the Hindu tradition society is divided into four “Varna” or social orders. These are:

38. It might be cheating : TRYST
In its most general sense, a tryst is a meeting at an agreed time and place. More usually we consider a tryst to be a prearranged meeting between lovers. The term comes from the Old French “triste”, a waiting place designated when hunting.

41. U.N. observer starting in ’74 : PLO
The Palestine Liberation Organization (PLO) was founded in 1964. The PLO’s early stated goal was the liberation of Palestine, with Palestine defined as the geographic entity that existed under the terms of the British Mandate granted by the League of Nations back in 1923. The PLO is recognized as the sole legitimate representative of the Palestinian people by over one hundred countries, and was granted observer status (i.e. no voting rights) at the United Nations in 1974.

42. Figure of speech? : PHONEME
I’m no linguist, so just accept that a phoneme is a basic sound in a language. A language is built up from a collection of those basic sounds.

43. One of the 12 tribes of Israel : REUBEN
In the Torah, the Israelites are traced back to Jacob, the grandson of Abraham. Jacob’s twelve sons became the ancestors of the Twelve Tribes of Israel. Jacob’s sons were:

48. Arizona county with a national monument of the same name : NAVAJO
Navajo National Monument lies within the Navajo Reservation in northern Arizona. There you can see ancient cliff dwellings of the Anasazi people that date back to around 1250 AD.

51. Cutesy sign-off : XOXO
In the sequence XOXO, I think the X represents a kiss, and the O a hug. Hugs and kisses …

52. Apiphobe’s bane : BEES
Apiphobia is the fear of bees or bee stings. “Apis” is the Latin word for “honey bee”.

54. Dessert with a spoon : GELATO
Gelato is the Italian version of American ice cream, differing in that it has a lower butterfat content than its US counterpart.

People described as being avant-garde are especially innovative. “Avant-garde” is French for “advance guard”.

59. Queen with a prominent bust : NEFERTITI
Nefertiti was the Great Royal Wife of the Egyptian Pharaoh Akhenaten. Nefertiti is relatively well-known in modern times largely due to a 3,300-year-old limestone bust that depicts her rather beautiful features. The painted bust was discovered by archaeologists in the sculptor’s workshop in 1912, and is on display in the Neues Museum in Berlin.

61. “King Lear” character : REGAN
In William Shakespeare’s “King Lear”, Regan is the king’s second daughter. Regan vies with her older sister for influence over her father, and for the attentions of Edmund, the illegitimate son of the Earl of Gloucester.

Down
3. “King Lear” character : EDMUND
Edmund is the main antagonist in William Shakespeare’s “King Lear”. Edmund is the illegitimate son of the Earl of Gloucester, and the younger brother of Edgar, the Earl’s legitimate heir. Edmund befriends the two power-thirsty daughters of the King, using them to further his own cause.

8. Longtime Tanglewood figure : OZAWA
Seiji Ozawa is most famous for his work as music director of the Boston Symphony Orchestra, although he is also the principal conductor of the Vienna State Opera. Ozawa is renowned for wearing a white turtleneck under his dress suit when he conducts, rather than the traditional starched shirt and white tie.

Tanglewood is an estate in Lenox, Massachusetts. Tanglewood is the summer home of the Boston Symphony Orchestra. The estate takes its name from “Tanglewood Tales” written by Nathaniel Hawthorn. The author wrote the book in 1853 while staying in a cottage in the area. The owner renamed the cottage after Hawthorn’s work, and the name was then adopted for the nearby estate.

9. One on a lunar calendar? : WEREWOLF
A werewolf morphs from human form into that of a wolf man when there is a full moon. There seems to an obsession about werewolves and vampires these days …

13. Annual holiday with an “airing of grievances” : FESTIVUS
Festivus is celebrated by some on December 23 each year, and has been done so since 1966. The holiday is an invention of the writer Dan O’Keefe. He introduced is to his family as a way of celebrating the season without falling prey to commercial pressure. Festivus has become popular since it was featured in a 1997 episode of the TV sitcom “Seinfeld”. Dan O’Keefe’s son was a screenwriter for that episode.

24. Cheesy crust : GRATIN
To cook “au gratin” is to prepare something in a shallow dish with a crust of bread or cheese on top. In American we tend to think mainly of potatoes prepared this way, but the technique can be used for many different dishes. Notably, what we call French onion soup, is called a “gratiné” in France, an onion soup with some bread and cheese baked on top.

26. Kid-lit title character who says “I am the ruler of all that I see!” : YERTLE
“Yertle the Turtle” is a story by Dr. Seuss. The book is noted for the inclusion of the word “burp”, which back in 1958 when it was published, was considered to be vulgar. But no one seemed to mind!

31. “The Phantom of the Opera” writer : LEROUX
Gaston Leroux was a French author and journalist best known for writing “The Phantom of the Opera”, first published in 1910. As a journalist, Leroux was involved in an investigation into the Paris Opera. The basement of the opera house contained a cell that was used to hold prisoners in 1871, something that Leroux featured in his most famous novel.

34. Largest living rodent : CAPYBARA
The capybara is the largest rodent in the world, a native of South America. This huge animal is related to the tiny little guinea pig, a remarkable relationship given that a fully grown adult capybara can be over four feet long, and weigh up to 140 pounds.

36. Primitive : STONE AGE
Ancient societies can be classified by the “three-age system”, which depends on the prevalence of materials used to make tools. The three ages are:

37. Like President James K. Polk : ELEVENTH
James Knox Polk was the 11th US President. He is known as a president who delivered on promises that he made during his election campaign. He left office after serving only one term, as he had promised the voters, and then contracted cholera on a goodwill tour of the South. He died at only 53 years of age, the youngest age for any president to die in retirement. He also enjoyed the shortest retirement of any president, at only 103 days. I guess that’s why no one keeps their campaign promises these days …

40. iPad read, maybe : EMAG
The very exciting iPad isn’t Apple’s first foray into the world of tablet computing. Apple created great buzz by introducing the Newton MessagePad way back in 1993. This innovative machine was fraught with problems and really died a very slow death, finally being withdrawn from the market in 1998.

41. Shape-shifting Greek sea god : PROTEUS
In Greek mythology, the sea-god Proteus had the ability to take on new shapes to hide himself. This led to our word “protean”, meaning someone or something that is ever-changing and versatile.

45. Not from around here : EXOTIC
The word “exotic” means “belonging to another country”, and is derived from the Greek “exo-” meaning “outside”. Exotica are things that are excitingly strange, often from foreign parts.

46. “Ain’t gonna happen” : NO DICE
One suggestion for the origin of the phrase “no dice”, meaning “nothing doing, no way”, refers back to illegal gambling in the early 1900s. When approached by police, illegal gamblers would hide their dice (some even swallowed them). It was well known that city attorneys wouldn’t prosecute unless the police could produce the dice. Apparently there was an idiom at the time, “no dice, no conviction”.

49. Former G.M. compact : ALERO
The Oldsmobile Alero was the last car made under the Oldsmobile brand, and was produced from 1999 to 2004.

50. Aladdin’s enemy : JAFAR
Jafar is the bad guy in the animated film “Aladdin”. Jafar was important enough to get his name front and center in the sequel “Aladdin 2”, which is usually referred to as “The Return of Jafar”.

58. Letters on some sticks : TNT
TNT is an abbreviation for trinitrotoluene. The chemical was first produced by the German chemist Joseph Wilbrand in 1863, who developed it for use as a yellow dye. TNT is relatively difficult to detonate so it was on the market as a dye for some years before its more explosive properties were discovered.