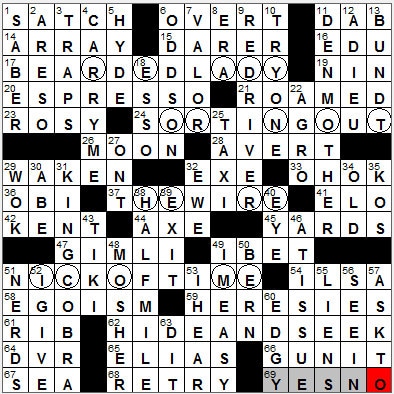 CROSSWORD SETTER: Mike Nothnagel
THEME: HIDE AND SEEK … the circled letters in the themed answers spell out a hidden message, words spoken during a game of hide and seek, “Ready or not, here I come”:

17A. Hirsute carnival attraction : BEARDED LADY
24A. Trying to make sense of : SORTING OUT
37A. Hit HBO series set in Baltimore : THE WIRE
51A. Eleventh hour : NICK OF TIME
62A. Children’s game hinted at by the circled letters : HIDE AND SEEK


Today’s Wiki-est, Amazonian Googlies
1. Nickname for Louis Armstrong : SATCH
The exact origin of Louis Armstrong’s nickname “Satchmo” seems to be a little unclear. One story is that Louis used to dance for pennies in New Orleans as a youngster and would hide those pennies in his mouth away from the other kids. For this he earned the nickname “satchel mouth”, which was shortened to “Satchmo”.

Louis Armstrong was born in New Orleans in 1900. He had a poor upbringing, and only stayed in school till he was 11 years old. When he died in 1971, the honorary pallbearers at his funeral included Bing Crosby, Ella Fitzgerald, Dizzy Gillespie, Count Basie, Frank Sinatra and Johnny Carson. What a talent the man had …

16. School’s URL ending : EDU
A domain name is basically the address of a website on the Internet. Some time ago, I moved the website for this blog to a new address (from puzzle.paxient.com to NYTCrossword.com). Like in the real world, one pays for an address. I now own (well rent!) both of the addresses used for this blog, but choose to “do business”, publish the blog, at the more memorable address … NYTCrossword.com. It’s sort of like preferring to have a Park Avenue address instead of one on say Elm Street. In the Internet world, elements of the domain name are intended to indicate what type of activity goes on at a particular address. So an address with “.com” implies a “company” website, a “.org” implies a non-profit website and “.edu” implies an education website. But in reality anyone can rent whatever address they want, as it just goes to the highest bidder. Most folks remember “.com” addresses, so they are the most popular. “.com” is meant to imply a “business address” as I say, but it can even be used for somewhere to chat about crosswords!

19. Writer Anaïs : NIN
Anaïs Nin was a French author, famous for the journals that she wrote for over sixty years from the age of 11 right up to her death. She also wrote highly regarded erotica, and cited D. H. Lawrence as someone from whom she drew inspiration.

20. Order of coffee in a small cup : ESPRESSO
Espresso is made by forcing extremely hot water, under pressure, through finely ground coffee beans. The result is a thick and concentrated coffee drink, which contains quite a lot of solids and a lot of foam. An espresso machine was first patented in 1884 in Italy, although it was a machine to make the beverage in bulk. The first patent for a machine that made individual measures was applied for in 1901, also in Italy.

26. Apollo 11’s destination : MOON
Apollo 11 was the most memorable of all space missions, landing the first humans on the moon on July 20, 1969. Neil Armstrong and Buzz Aldrin touched down on the moon’s surface in their landing craft “Eagle”, while Michael Collins orbited in the command module “Columbia”. It was to be the first of five moon landings that would take place from 1969-1972.

32. Computer file extension : EXE
In the Windows Operating System, a file with the extension .exe is an “executable” file.

37. Hit HBO series set in Baltimore : THE WIRE
I didn’t watch “The Wire” when it first aired but we ending up buying all five series on DVD and we watched the whole thing not so long ago. It’s is a great drama series, and I thoroughly recommend it. Personally, I think that HBO produces some of the best dramas on American television.

41. “Evil Woman” rock grp. : ELO
ELO of course stands for the Electric Light Orchestra, a symphonic rock group from the north of England. The band’s manager was Don Arden, father of Sharon Osbourne (wife of Ozzy).

44. Lumberjack’s tool : AXE
As one might imagine, “lumberjack” was originally a Canadian term.

45. Gridiron units : YARDS
We never used the word “gridiron” when I was growing up (meaning a grill used for cooking food over an open fire). So, maybe I am excused for finding out fairly recently that a football field gridiron is so called because the layout of yard lines over the field looks like a gridiron used in cooking!

54. Rick’s love in “Casablanca” : ILSA
Ilsa Lund was of course played by Ingrid Bergman in the 1942 movie “Casablanca”. I love the words of one critic describing the chemistry between Bogart and Bergman in this film: “she paints his face with her eyes”. Wow …

59. Inquisition targets : HERESIES
The Inquisition was a practice used by the Roman Catholic Church in a fight against heresy starting in the 12th century. The job of the Inquisition was to determine if one accused was actually a heretic, and then to hand over said heretic to secular authorities for punishment, which often included burning at the stake.

64. TiVo, for one, in brief : DVR
TiVo was introduced in 1999, and was the world’s first commercially successful DVR (Digital Video Recorder). If you don’t have a DVR, you might want to consider getting one. For those who enjoy television, it’s very liberating …

65. Inventor Howe : ELIAS
Elias Howe was an American inventor. He wasn’t the first to come up with the idea of a sewing machine, but he was the first to develop one that was functional.

67. Mediterranean, e.g. : SEA
The Mediterranean Sea is almost completely enclosed by land, and is connected to the Atlantic Ocean by the narrow Strait of Gibraltar. The sea takes its name from the Latin “mediterraneus”, which means “in the middle of land”.

Down
5. Jekyll’s alter ego : HYDE
Robert Louis Stevenson’s novella “The Strange Case of Dr. Jekyll and Mr. Hyde” was first published in 1886. There are many tales surrounding the writing of the story including one that the author wrote the basic tale in just three to six days, and spent a few weeks simply refining it. Allegedly, Stevenson’s use of cocaine stimulated his creative juices during those first few days of writing.

8. ___ of Good Feelings : ERA
The Era of Good Feelings lasted from about 1816 to 1824, during the administration of President James Monroe. The name described the feeling of bipartisanship that permeated politics at that time, largely due to President Monroe deliberately downplaying differences between the parties in Washington. One can only dream …

13. Kind of cake that’s ring-shaped : BUNDT
I had never heard of a bundt cake until I moved to the US, and it turns out that “bundt” is indeed a term used almost exclusively in North America. Our use of “bundt” seems to come from the German “Bundkucken”, the name for a ring-shaped cake served at tea time.

18. Gas brand with a tiger symbol : ESSO
The brand name Esso has its roots in the old Standard Oil company, as it uses the initial letters of “Standard” and “Oil” (ESS-O). The Esso brand was replaced by Exxon in the US but it is still used in many other countries.

27. Province west of Que. : ONT
The Canadian province of Ontario takes its name from the Great Lake. In turn, Lake Ontario’s name is thought to be derived from “Ontari:io”, a Huron word meaning “great lake”. Ontario is home to the nation’s capital, Ottawa, as well as Toronto, Canada’s most populous city (and capital of the province).

29. Chinese cooker : WOK
Wok is a Cantonese word, the name of the frying pan now used in many Asian cuisines.

30. Lincoln, informally : ABE
Abraham Lincoln was born in a one-room log cabin in Hardin County, Kentucky making him the first president born in the West. His formal education was limited to a year and a half of schooling, but fortunately for us, Lincoln was an avid reader and educated himself over the years. Even though he was from a rural area, he avoided hunting and fishing because he did not like to kill animals, even for food.

38. One-third the length of the Belmont Stakes : HALF-MILE
The Belmont Stakes is a horse race held in June each year, at Belmont Park racetrack in Elmont, New York. The Belmont is the last of the US Triple Crown races, following the Kentucky Derby and the Preakness.

43. ___ torch (outdoor party lighting) : TIKI
A tiki torch is a bamboo torch that’s very commonly used in Tiki culture. Tiki culture is a modern invention, dating from the 20th century, and is the experience created in Polynesian-style restaurants. The word “Tiki” is borrowed from Polynesia.

48. One in a pit at a concert : MOSHER
Moshing is the pushing and shoving that takes place in the audience at a concert (usually a punk or heavy metal concert). The area directly in front of the stage is known as the mosh pit. When a performer does a “stage dive” it is into (or I suppose “onto”) the mosh pit. It doesn’t sound like fun to me. Injuries are common in the mosh pit, and deaths are not unknown.

50. Capital of Switzerland : BERN
Bern (or Berne) is the capital city of Switzerland. The official language of the city is German, but the language most spoken in Bern is a dialect known as Bernese German.

55. Property claims : LIENS
A lien is the right that one has to retain or secure someone’s property until a debt is paid.

63. Dah’s counterpart in Morse code : DIT
Samuel Morse was a very accomplished and reputable painter (he was engaged to paint a portrait of President John Adams, for example). In 1825 he was in Washington working on a commissioned painting when he received a one-line letter by horse messenger telling him that his wife was ill. He left immediately for his home in New Haven, Connecticut but by the time he arrived she had already died and had been buried. This single event spurred him to move from painting to the development of a rapid means of long distance communication, leading to the single-wire telegraph and Morse code.