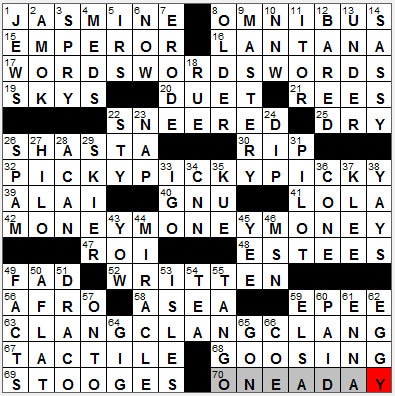 CROSSWORD SETTER: Andrea Carla Michaels
THEME: Three Times … all of the theme answers are phrases made up of a word repeated twice:


Today’s Wiki-est, Amazonian Googlies
1. Kind of 54-Down that’s flavored with flowers : JASMINE
(54D. Pekoe, e.g. : TEA)
The reason why jasmine tea has a floral scent is because as the tea leaves are being dried, they are “mated” with jasmine blossoms. They are stored together in a humid environment so that the fragrance and flavor of the flowers are absorbed by the leaves.

8. Compilation book : OMNIBUS
“Omnibus” is Latin for “for all”.

15. Tiberius or Charlemagne : EMPEROR
Tiberius was the second Emperor of Rome, succeeding Augustus. In his latter life Tiberius became very reclusive, not really wanting the responsibilities of Emperor but refusing to give up his power. Instead, he exiled himself from Rome leaving administrative control of the Empire to unscrupulous aides. Tiberius himself led a quiet life on the island of Capri. His death at the age of 77 was apparently hastened by a pillow placed over his face, an act ordered by his successor, Caligula.

16. Flowering shrub common in the South : LANTANA
Lantana species are quite common in many parts of the world, with some being considered as weeds.

17. Hamlet’s reply to “What do you read, my lord?” : WORDS, WORDS, WORDS
“Words, words, words” is a line from Shakespeare’s “Hamlet” spoken by the title character to Polonius. Polonius is the chief counsellor to Hamlet’s uncle and someone who Hamlet eventually murders.

26. California peak : SHASTA
The origin of the name “Shasta” seems to be unclear. It may have come from the Russian “tchastal” meaning “white, clean, pure”, a name given to the volcanic peak by early Russian immigrants.

39. Jai ___ : ALAI
Even though jai alai is often said to be the fastest sport in the world because of the speed of the ball, in fact golf balls usually get going at a greater clip.

40. Bearded beast of Africa : GNU
A gnu is also known as a wildebeest, an antelope native to Africa. Wildebeest is actually the Dutch word for “wild beast”.

41. “Damn Yankees” seductress : LOLA
“Whatever Lola Wants” is a song from the musical “Damn Yankees”. “Damn Yankees” is actually yet another version of the classic German legend of “Faust”, set in Washington, D.C. in the fifties. The show was written by Richard Adler and Jerry Ross, a production that turned out to be a very successful follow-up to their prior hit, “The Pajama Game”. The future was looking really rosy for Adler and Ross but, sadly, Jerry Ross died of an obstructive lung disease only a few weeks after “Damn Yankees” opened on Broadway in 1955. He was just 29 years old.

42. 1976 Abba hit : MONEY, MONEY, MONEY
I am an unapologetic fan of ABBA’s music. ABBA was of course the Swedish group who topped the charts in the seventies and eighties. The name ABBA is an acronym formed from the first letters of the given names of each of the band members, namely: Agnetha, Benny, Bjorn and Anni-Frid.

48. Cosmetician Lauder and others : ESTEES
Estée Lauder was quite the successful business woman, with a reputation as a great sales person. She introduced her own line of fragrances starting in 1953, a bath oil called “Youth Dew”. “Youth Dew” was marketed as a perfume, but it was added to bath water. All of a sudden women were pouring whole bottles of Ms. Lauder’s “perfume” into their baths, while using only a drop or two of French perfumes behind their ears. That’s quite a difference in sales volume …

59. Fencing sword : EPEE
The French word for sword is épée. In competitive fencing the épée is connected to a system that records an electrical signal when legal contact is made on an opponent’s body.

68. Prodding into action : GOOSING
“To goose” is to prod into action, albeit a little rudely. A “goose” is a prod or pinch in the rear end.

69. Moe, Larry and Curly : STOOGES
If you’ve seen a few of the films starring “The Three Stooges” you’ll have noticed that the line up changed over the years. The original trio was made up of Moe and Shemp Howard (two brothers) and Larry Fine (a good friend of the Howards). This line up was usually known as “Moe, Larry and Shemp”. Then Curly Howard replaced his brother when Shemp quit the act, creating the most famous trio, “Moe, Larry And Curly”. Shemp returned when Curly had a debilitating stroke in 1946, and Shemp stayed with the troupe until he died in 1955. Shemp was replaced by Joe Besser, and then “Curly-Joe” DeRita. When Larry had a stroke in 1970, it effectively marked the end of the act.

Down
2. Frenzied : AMOK
The phrase “to run amok” (sometimes “to run amuck”) has been around since the 1670s and is derived from the Malay word for “attacking furiously”, “amuk”. The word “amok” was also used as a noun, to describe Malay natives who were “frenzied”. Given Malaya’s troubled history, the natives probably had good reason for that frenzy …

5. Tax org. : IRS
The Internal Revenue Service (IRS) was set up during the Civil War to raise money to cover war expenses. Prior to the introduction of income tax in 1862, the government was funded by levies on trade and property.

11. “Believe ___ Not!” : IT OR
“Ripley’s Believe It of Not!” is a huge franchise on television and with a worldwide chain of museums. It started out as cartoon feature appearing in newspapers in 1918.

14. Impertinent : SASSY
“Sass”, meaning “impudence”, is a back formation from the word “sassy”. “Sassy” is an alteration of the word “saucy”, with “sassy” first appearing in English in the 1830s.

26. E-mail that’s sent out by the millions : SPAM
I think that the oft-quoted story may be true that the term SPAM, used for unwanted email, is taken from a “Monty Python” sketch. In the sketch (which I’ve seen) the dialog is taken over by the word SPAM, a play on the glut of canned meat in the markets of Britain after WWII. So “SPAM” is used for the glut of emails that takes over online communication. I can just imagine nerdy Internet types (like me) adopting something from a “Monty Python” sketch to describe an online phenomenon …

27. Largest city on the island of Hawaii : HILO
Hilo is the largest settlement on the big island of Hawai’i, with a population of over 43,000 (that’s not very many!). Oh, I love the Big Island …

29. T-bar rider : SKIER
A T-bar is a type of ski lift in which the skiers are pulled up the hill in pairs, with each pair standing (not sitting!) either side of T-shaped metal bar. The bar is placed behind the thighs, pulling along the skier who remains standing on his/her skis (hopefully!). There’s also a J-bar, a similar device, but with each J-shaped bar used by one skier at a time.

34. Channel for Anderson Cooper : CNN
CNN (Cable News Network) was launched in 1980, the first television channel in the world to provide news coverage 24 hours a day.

Anderson Cooper is a great news personality on CNN and on various shows around the dial. My favorite appearances of his, although he would call them trivial I am sure, was as host of a great reality game show called “The Mole” that aired in 2001.

44. Backup singer for Smokey Robinson : MIRACLE
The Miracles got together back in 1955. The group was first called the Matadors, and was later known as Smokey Robinson & the Miracles. Their biggest hit was the great song from 1970 called “The Tears of a Clown”.

46. AOL alternative : MSN
MSN was originally called The Microsoft Network, introduced in 1995 as an integral part of Microsoft’s Windows 95 operating system. MSN is a whole bundle of services including email, instant messaging, and the MSN.com portal (which is the 9th most visited site on the Internet).

Founded as Quantum Computer Services in 1983 the company changed its name in 1989 to America Online. As America Online went international, the acronym AOL was used in order to shake off the “America-centric” sound to the name. During the heady days of AOL’s success the company could not keep up with the growing number of subscribers, so people trying to connect often encountered busy signals. That’s when users referred to AOL as “Always Off-Line”.

53. Capri and Wight : ISLES
The island of Capri off the coast of Southern Italy has been a tourist resort since the days of ancient Rome. Capri is home to the famous Blue Grotto, a sea cave that is illuminated with sunlight which turns blue as it passes through the seawater into the cave.

The Isle of Wight is the largest island in England, and lies about five miles off the south coast.

59. “Born Free” lioness : ELSA
The life story of Elsa the lion was told by game warden Joy Adamson, who had a very close relationship with the lioness from when she was orphaned as a young cub. Adamson wrote the book “Born Free” about Elsa, and then “Living Free” which told the story of Elsa and her three lion cubs. In the 1966 film based on “Born Free”, Adamson is played by the talented actress Virginia McKenna.

61. Sicilian city : ENNA
The city of Enna sits very high up in the hills of Sicily, overlooking the whole island below. Enna is the capital of the province that bears its name, which is the highest province in the whole country of Italy.

62. Like a soufflé : EGGY
A soufflé is of course a French dish, usually served as a dessert. The verb “souffler” means “to blow, blow up”.