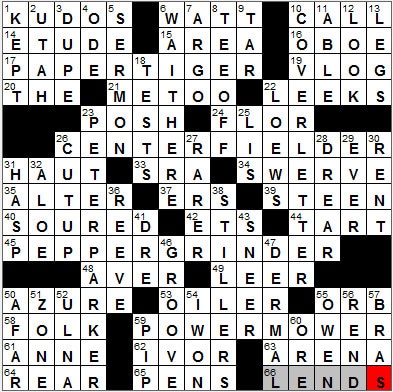 CROSSWORD SETTER: Gary Cee
THEME: ERs … in each of the themed answers is composed of two words, each ending with the letter sequence “ER”:

17A. *One who’s an empty threat : PAPER TIGER
26A. *Willie Mays, positionally : CENTER FIELDER
37A. Hosp. parts … or what the answers to the six starred clues each have twice : ERS
45A. *What a waiter might be holding when he says “Say when” : PEPPER GRINDER
59A. *Lawn-Boy or Toro product : POWER MOWER
10D. *Enclosure with a manuscript or résumé : COVER LETTER
23D. *Spider-Man’s alter ego : PETER PARKER


Today’s Wiki-est, Amazonian Googlies
1. High praise : KUDOS
Our word “kudos” is used to acclaim an exceptional achievement. “Kudos” is not a plural, despite a common misapprehension. It is a singular noun derived from the Greek “kyddos” meaning “glory, fame”.

6. Light bulb unit : WATT
James Watt was a Scottish inventor, a man who figured prominently in the Industrial Revolution in Britain largely due to the improvements he made to the fledgling steam engine. The SI unit of power is called the watt, named in his honor.

14. Piano practice piece : ETUDE
An étude is a small instrumental composition that is usually quite hard to play and is intended to help the performer master a particular technique. Étude is the French word for “study”. Études are commonly performed on the piano.

16. Woodwind able to provide an orchestra’s tuning note : OBOE
The oboe is perhaps my favorite of the reed instruments. The name “oboe” comes from the French “hautbois” which means “high wood”. When you hear an orchestra tuning before a performance you’ll note (pun intended!) the oboe starts off the process by playing an “A”. The rest of the musicians in turn tune to that oboe’s “A”. Oh, and if you want to read a fun book (almost an “exposé”) about life playing the oboe, you might try “Mozart in the Jungle” by oboist Blair Tindall. I heard recently that HBO are working towards a pilot based on the book. I can’t wait to see it!

19. Journal on YouTube, maybe : VLOG
A video blog is perhaps what one might expect, a blog that is essentially a series of video posts. The term “video logging” is often shortened to “vlogging”.

23. Luxurious : POSH
No one really knows the etymology of the word “posh”. The popular story that POSH stands for “Port Out, Starboard Home” is completely untrue, a story that can be traced back to the 1968 movie “Chitty Chitty Bang Bang”. The myth is that wealthy British passengers travelling to and from India would book cabins on the port side for the outward journey and the starboard side for the home journey. This trick was supposedly designed to keep their cabins out of the direct sunlight.

26. *Willie Mays, positionally : CENTER FIELDER
Willie Mays’ nickname was the “Say Hey Kid”, although his friends and teammates were more likely to refer to him as “Buck”. When Mays was inducted into the Baseball Hall of Fame, he was asked who was the best player he’d seen in the game. He replied, “I don’t mean to be bashful, but I was.”

39. Dutch painter Jan : STEEN
Jan Steen was a Dutch painter active in the Dutch Golden Age, the 17th century. HIs most famous work is probably “The Feast of Saint Nicholas”.

42. Visitors from beyond : ETS
In 1952, the USAF revived its studies of reports of UFO sightings in a program called Project Blue Book. There were two prior USAF studies of the UFO phenomenon, namely Project Sign and Project Grudge. Project Blue Book ran from 1952 until it was shut down in 1969 with the conclusion that there was no threat to national security, and that there were no sightings that could not be explained within the bounds of modern scientific knowledge.

50. Sky-blue : AZURE
The word “azure” came in to English from Persian via Old French. The French word “l’azur” was taken from the Persian name for a place in northeastern Afghanistan called “Lazheward” which was the main source of the semi-precious stone lapis lazuli. The stone has a vivid blue color, and “azure” has been describing this color since the 14th century.

53. Former Houston footballer : OILER
The Houston Oilers were an AFL charter team, founded in 1960. The team moved to Tennessee in 1997, and became the Tennessee Titans in 1999.

58. Music genre for Joan Baez : FOLK
Joan Baez is an American folk singer, and a prominent activist in the fields of nonviolence, civil rights, human rights and environmental protection. She has dated some high-profile figures in her life including Bob Dylan, Steve Jobs (of Apple) and Mickey Hart of the Grateful Dead.

61. Actress Hathaway of “The Princess Diaries” : ANNE
The young actress Anne Hathaway is a favorite of mine, I must say. She starred in “The Devil Wears Prada” in 2006, and in 2007’s “Becoming Jane”, a film I particularly enjoyed.

62. Actor/songwriter Novello : IVOR
Ivor Novello was one of the most popular entertainers in Britain in the early 20th century He was a Welsh composer, singer and actor. On top of his success on the stage and in front of the camera, he even wrote the dialogue for the 1932 movie “Tarzan the Ape Man” starring Johnny Weissmuller.

64. Caboose : REAR
The word “caboose” originally came from Middle Dutch and was the word for a ship’s galley. When the last car in a train in North America was given a stove for the comfort of the crew, it took on the name “caboose”.

Down
2. Home of the Sundance Film Festival : UTAH
The Sundance film festival is the largest independent film event in the country, and takes place every year around the Sundance Resort near Provo, Utah. The festival has its roots in the Utah/US Film Festival which started in Salt Lake City in 1978. Management of the festival was taken over by Robert Redford’s Sundance Institute in 1985. The festival has became a bit of a media feeding frenzy in recent years, as a lot of A-list celebrities attend. The Festival organizers introduced a “Focus on Film” campaign in 2007 to try to offset some of the madness.

7. Jason’s ship, in myth : ARGO
In Greek mythology, Jason and the Argonauts sailed on the Argo in search of the Golden Fleece. The vessel was called the “Argo” in honor of the ship’s builder, a man named Argus.

22. Major theater chain : LOEWS
Loews Theatres was a chain of movie theaters founded in 1904 by Marcus Loew and Brantford Schwartz. It merged with AMC Theaters in 2006.

Marcus Loew was a New Yorker, born into a poor Jewish family. He started out in a penny arcade business and used its profits to buy into a nickelodeon. He later built a whole chain of movie theaters, and then moved into the production of films so that he could guarantee supply of movies that he could show in his theaters. Eventually he pulled together the Metro-Goldwyn-Mayer film production company, sadly passing away just three years after he inked the deal.

23. *Spider-Man’s alter ego : PETER PARKER
Spider-Man was a creation of Stan Lee, along with Steve Ditko. Spider-Man first appeared in comics in 1962.

25. Fleur-de-___ : LIS
“Lys” (also “lis”) is the French word for “lily”, as in fleur-de-lys, the heraldic symbol often associated with the French monarchy.

29. Last word in the Lord’s Prayer, before “Amen” : EVER
The Lord’s Prayer is a central prayer in Christian religions, and is found in two places in the New Testament. In the version in the Gospel of Matthew the last line of the prayer is “deliver from evil”. In the Gospel of Luke the last line is “lead us not into temptation”. The last words of the prayer as it most often said today are:

31. Gate hardware : HASP
The “hasp” of a lock might refer to more than one thing. The u-shape loop protruding from a padlock is often called a “lock hasp”, for example.

32. Skin soother : ALOE
Aloe vera has a number of alternate names that are descriptive of its efficacy as a medicine. These include the First Aid plant, Wand of Heaven, Silent Healer and Miracle Plant.

36. Christopher of “Superman” : REEVE
The actor Christopher Reeve was most associated with his portrayal of Superman in the late seventies and early eighties. Reeve became paralyzed from the neck down when he fell from a horse in a jumping event in 1995. He passed away in 2004.

38. Ben and Jerry : STILLERS
Jerry Stiller is an actor and comedian, most associated with the role of Frank Costanza on “Seinfeld”. For many years he was part of the comedy team Stiller and Meara along with his wife, Anne Meara. And of course, Stiller and Meara are the parents of the actors Ben Stiller and Amy Stiller.

Ben Stiller is the son of actors Jerry Stiller and Anne Meara. Ben is perhaps as well-known as a director as he is an actor. He made his debut as a director in the film “Reality Bites” in 1994.

41. Rap’s Dr. ___ : DRE
Dr. Dre is the stage name of rapper Andre Romelle Young. He is perhaps as well known for his own singing career as he is for producing records and starting the careers of others such Snoop Dog, Eminem and 50 Cent.

51. The “Z” of DMZ : ZONE
A demilitarized zone (DMZ) is usually a border between two countries where military activity is banned according to some treaty between interested parties. The most famous DMZ today has to be the buffer zone between North and South Korea. The Korean DMZ snakes right across the Korean peninsula near the 38th parallel. The center line of the DMZ is where the front was when the ceasefire came into effect in 1953 after the Korean War. According to the armistice signed, all troops had to move back 2,000 meters from the front line on both sides, creating the DMZ that is in place today. Paradoxically perhaps, the areas on either side of the DMZ form the most heavily militarized border in the world.

55. Wilson of “Wedding Crashers” : OWEN
The actor Owen Wilson was nominated for an Oscar, but not for his acting. He was nominated for co-writing the screenplay for “The Royal Tenenbaums” along with Wes Anderson.

57. They give women a lift : BRAS
The word “brassière” is of course French in origin, but it isn’t the word the French use for a “bra”. In France what we call a bra is known as a “soutien-gorge”, translating to “held under the neck”. The word “brassière” is indeed used in France but there it describes a baby’s undershirt, a lifebelt or a harness. “Brassière” comes from the Old French word for an arm protector in a military uniform (“bras” is the French for “arm”). Later “brassière” came to mean “breast plate” and from there was used for a type of woman’s corset. The word jumped into English around 1900.

59. Backup singer for Gladys Knight : PIP
Gladys Knight & the Pips were performing together from 1953 to 1989. The group was founded around Gladys Knight, originally featuring her brother, sister and two cousins. The group took its name from yet another cousin, called “Pip”.