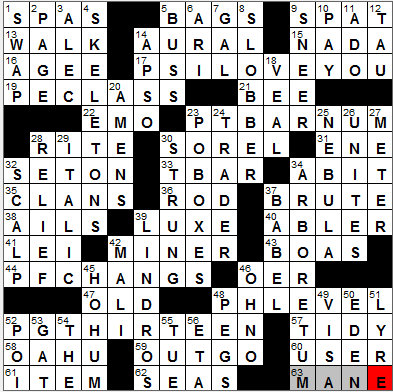 CROSSWORD SETTER: David Steinberg
THEME: PX Something … each of the theme answers starts with two letters, followed by a word:


Today’s Wiki-est, Amazonian Googlies
Across
1. Healthful retreats : SPAS
The word “spa” migrated into English from Belgium, as Spa is the name of a municipality in the east of the country that is famous for its healing hot springs. The name “Spa” comes from the Walloon word “espa” meaning “spring, fountain”.

15. Nothin’ : NADA
“Nada” is the Spanish word for “nothing”. “De nada” translates literally from the Spanish as “of nothing”, and is used to mean “you’re welcome” or “don’t mention it”. The French have the same expression “de rien”, also translating to “of nothing” and used the same way.

17. 1964 Beatles hit : PS I LOVE YOU
“P.S. I Love You” was recorded by the Beatles way back in 1962. On the recording, Ringo Starr is playing the maracas, not the drums. A session musician played the drums, replacing Pete Best who had just been fired by Brian Epstein. Ringo had not yet been “anointed” as Best’s replacement.

22. Alternative rock genre : EMO
The musical genre of “emo” originated in Washington D.C. in the 80s, and takes its name from “emotional hardcore”. Not my cup of tea …

23. Showman associated with the quote “There’s a sucker born every minute” : PT BARNUM
Phineas Taylor Barnum was one of the great American showmen, famous for founding the Barnum & Bailey Circus. By some measures, Barnum was the first ever “show business” millionaire. Beyond the world of entertainment, Barnum was also a politician for a while and served two terms in the Connecticut legislature, and was mayor of the city of Bridgeport. Barnum was a very successful author as well. One of his most famous books was “The Humbugs of the World“, an exposé of deceptions in the world of entertainment. He was a believer in illusions providing they gave value for money in terms of entertainment, but he had an intense dislike of fraudulent deception and came down hard on spiritualist mediums in particular.

30. Illustrator Edward : SOREL
Edward Sorel is an illustrator and cartoonist from New York City. He is noted for creating content that is critical of right-wing politics and organized religion.

33. Ski lift : T-BAR
A T-bar is a type of ski lift in which the skiers are pulled up the hill in pairs, with each pair standing (not sitting!) either side of T-shaped metal bar. The bar is placed behind the thighs, pulling along the skier who remains standing on his/her skis (hopefully!). There’s also a J-bar, a similar device, but with each J-shaped bar used by one skier at a time.

37. “Et tu, ___?” : BRUTE
It was Shakespeare who came up with the words “Et tu, Brute?” (And you, Brutus?), in his play “Julius Caesar” although the phrase was around long before he penned his drama. It’s not known what Julius Caesar actually said just before he was assassinated on the steps of the Senate in Rome.

39. Sumptuous : LUXE
“Luxe” can be used as an adjective, meaning elegant and sumptuous, posh.

41. Hawaiian souvenir : LEI
“Lei” is the Hawaiian word for “garland, wreath”, although in more general terms a “lei” is any series of objects strung together as an adornment for the body.

43. Constricting snakes : BOAS
Boa constrictors are members of the Boidae family of snakes, all of which are non-venomous. Interestingly, the female boa is always bigger than the male.

Francis Scott Key wrote the lyrics of “The Star-Spangled Banner” as a poem, inspired by witnessing the bombarding by the British of the American forces at Fort McHenry during the Battle of Baltimore in September 1814. The words were then set to the tune of a popular British drinking song penned by John Stafford Smith called “The Anacreontic Song”, with the Anacreontic Society being a men’s club in London.

48. Acidity or alkalinity : PH LEVEL
As we all recall from chemistry class, a pH of 7 is considered neutral. Anything less than 7 is an acid, and anything above 7 is a base.

52. Rating of “Avatar” : PG THIRTEEN
I went to the 3D version of “Avatar” when I saw it for the first time … it really is the only way to see that movie!

58. Hawaiian island : OAHU
O’ahu has been called “The Gathering Place”, although the word “O’ahu” has no translation in Hawaiian. It seems that O’ahu is simply the name of the island. One story is that it is named after the son of the Polynesian navigator that first found the islands.

62. Seven things for a sailor : SEAS
The phrase “the seven seas” has been used for centuries by many different peoples. The actual definition of what constitutes the collection of seven has varied depending on the period and the culture. Nowadays we consider the seven largest bodies of water as the seven seas, namely:

Down
3. Baldwin who has hosted “S.N.L.” more times than anyone else : ALEC
Alec is the oldest of the acting Baldwin brothers. I think his big break was playing Tom Clancy’s Jack Ryan in “The Hunt for Red October”, but thank goodness that role was taken over by Harrison Ford for the subsequent Jack Ryan movies. Baldwin is making a name for himself these days playing Jack Donaghy on “30 Rock”, opposite Tina Fey. He has also hosted the sketch show “Saturday Night Live” more times than anyone else (16 times).

6. “Exodus” hero : ARI
“Exodus” is a wonderful novel written by American writer Leon Uris, first published in 1947. The book was incredibly well received by the public, and is the second biggest best seller in the US, after “Gone with the Wind”. The hero of the piece is Ari Ben Canaan, played by Paul Newman in the 1960 film adaptation directed by Otto Preminger.

12. Sigma’s follower : TAU
Tau is the 19th letter of the Greek alphabet, the letter which gave rise to our Roman “T”. Both the letters tau (T) and chi (X) were symbolically associated with the cross.

14. Lhasa ___ (dog) : APSO
The Lhasa apso breed of dog originated in Tibet, and is named after Lhasa (the capital city) and apso (a Tibetan word meaning “bearded”). The Lhasa apso has been around since 800 BC and is one of the oldest breeds in the world, one very closely related to the ancestral wolf.

25. Part of a galaxy : NEBULA
In astronomical terms a nebula is a cloud of dust and ionized gases (“nebula” is the Latin for “cloud”). Many nebulae form as gases collapse in on themselves under the influence of enormous gravitational forces. Ultimately these collapses can result in the creation of new stars.

28. What the Red Cross provides : RELIEF
Back in 1859, a Swiss businessman called Henry Dunant went to meet French emperor Napoleon III, to discuss making it easier to conduct commerce in French-occupied Algeria. The Emperor was billeted at Solferino, where France and Austria were engaged in a major battle. In one day, Dunant witnessed 40,000 soldiers die in battle, and countless wounded suffering on the battlefield without any organized medical care. Dunant abandoned his business agenda, and spent a week caring for the sick and wounded. Within a few years he had founded the precursor to the Red Cross, and in 1901 was awarded the first ever Nobel Peace Prize.

29. Slanted type : ITALIC
Italic type leans to the right. The style is known as “italic” because the stylized calligraphic form of writing originated in Italy, probably in the Vatican.

37. Tower of ___ : BABEL
We use the word “babel” now to describe a scene of confusion, lifting the term from the biblical story of the Tower of Babel. The Tower was built in the city of Babylon, and the construction was cursed with a confusion of languages due to the varied origins of all the builders.

39. Retired hockey great Eric : LINDROS
Eric Lindros is a retired Canadian hockey player. During his NHL career he played for the Philadelphia Flyers, the New York Rangers, the Toronto Maple Leafs and the Dallas Stars.

42. West African land : MALI
The Republic of Mali is a landlocked country in western Africa, south of Algeria. The country’s most famous city is more famous than the country itself, namely the city of Timbuktu.

49. MasterCard competitor : VISA
Did you know that Visa doesn’t issue any credit cards? Visa just sells the electronic systems and infrastructure to banks who then put the Visa logo on their own cards so that both the customer and merchant know to use the VISA system when making a transaction.

50. Place of bliss : EDEN
According to the Book Of Genesis, Adam and Eve lived in a garden “in” Eden, with Eden being geographically located by reference to four rivers, including the Tigris and the Euphrates. Some scholars hypothesize that Eden was located in Mesopotamia, which encompasses much of modern-day Iraq.

51. Bard’s instrument : LYRE
A lyre is a stringed instrument, most closely associated with Ancient Greece.

52. Hawaiian dish : POI
I am a big fan of starch, and being an Irishman I love potatoes however they are prepared. That said, I think that poi tastes horrible! Poi is made from the bulbous tubers (corm) of the taro plant, by cooking the corm in water and mashing it until the desired consistency is achieved.

53. Gangster’s gun : GAT
“Gat” is the slang term for the Gatling gun, the precursor to the modern machine gun. The Gatling gun was invented by Dr. Richard J. Gatling in 1861. Apparently he was inspired to invent it so that one man could do as much damage as a hundred, thereby reducing the size of armies and diminishing the suffering caused by war. Go figure …

55. Election day: Abbr. : TUE
Election Day was chosen by congress back in 1845. The month of November was selected as it suited an agricultural society, following the fall harvest and yet not too far into winter, which could make travel difficult. Tuesday was chosen so that people had time to travel to polling stations. Monday elections might have meant that some would have to start out on Sunday, and that could interfere with Christian services.