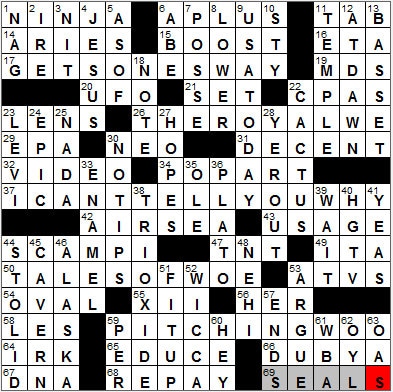 
Today’s Wiki-est, Amazonian Googlies
Across
1. Teenage Mutant ___ Turtles : NINJA
The “Teenage Mutant Ninja Turtles” started out as a parody of comic book superheroes, first appearing in a self-published comic book in 1984. A couple of years later the characters were picked up by someone who built a whole line toys around the characters, and then television and movies followed. Do you remember the names of all four of the Turtles? Their names were all taken from Renaissance artists:

14. Spring zodiac sign : ARIES
Aries is the first astrological sign in the Zodiac, and is named after the constellation. Your birth sign is Aries if you were born between March 21 and April 20, but if you are an Aries, you would know that!

20. Sci-fi vehicle : UFO
In 1952, the USAF revived its studies of reports of Unidentified Flying Object (UFO) sightings, in a program called Project Blue Book. There were two prior USAF studies of the UFO phenomenon, namely Project Sign and Project Grudge. Project Blue Book ran from 1952 until it was shut down in 1969 after concluding that there was no threat to national security as there were no sightings that could not be explained within the bounds of modern scientific knowledge.

26. Pompous pronoun : THE ROYAL WE
The royal “we” is more correctly called the majestic plural, and is the use of a plural pronoun to describe a single person in a high office. I suppose the most often quoted phrase that uses the majestic plural is, “We are not amused”, uttered by Queen Victoria.

29. Clean air org. : EPA
The Environmental Protection Agency was set up during the Nixon administration, and began operation at the end of 1970.

34. Andy Warhol genre : POP ART
Andy Warhol went through a period of painting iconic American products, including Coca-Cola bottles and Campbell’s Soup cans. In 1964 he participated in a gallery show called “The American Supermarket”. Along with other pop artists he contributed works including a painting of a can of Campbell’s soup. He priced the painting at $1,500, and sold autographed cans of soup for $6 a piece.

42. Two-front, as a Coast Guard rescue : AIR-SEA
The US Coast Guard (USCG) has the distinction of being the country’s oldest continuous seagoing service. It was founded as the “Revenue Cutter Service” by Alexander Hamilton in 1790.

44. Italian shrimp dish : SCAMPI
The Italian dish known as “scampi” is a serving of shrimp in garlic butter and dry white wine.

47. Blaster’s buy : TNT
TNT is an abbreviation for trinitrotoluene. The chemical was first produced by the German chemist Joseph Wilbrand in 1863, who developed it for use as a yellow dye. TNT is relatively difficult to detonate so it was on the market as a dye for some years before its more explosive properties were discovered.

53. Off-road bikes, for short : ATVS
An all terrain vehicle.

54. Cameo shape : OVAL
Cameo is a method of carving, often the carving of a gemstone or a piece of jewelry. The resulting image is in relief (sits proud of the background), whereas an engraved image would be produced by the similar carving method known as intaglio. Nowadays, the term cameo is used for any piece of oval-shaped jewelry that contains the image of a person’s head, usually in profile (maybe even a photograph).

58. “___ Misérables” : LES
The 1980 musical “Les Miserables” is an adaptation of the 1862 novel of the same name by Victor Hugo. The show opened in London in 1985, and is the longest running musical in the history of London’s West End. My wife and I saw “Les Miz” in the Queen’s Theatre in London quite a few years ago, but were only able to get tickets in the very back row. The theater seating is very steep, so the back row of the balcony is extremely high over the stage. One of the big events in the storyline is the building of a street barricade over which the rebels fight. At the height we were seated we could see the stagehands behind the barricade, sitting drinking Coke, even having a cigarette. On cue they would get up and catch a dropped rifle, or an actor that had been shot. It was pretty comical. I didn’t really enjoy the show that much, to be honest. Some great songs, but the storyline just didn’t seem to hang together for me.

67. Crime lab evidence : DNA
Forensic scientists use DNA, usually taken from blood, semen, skin, saliva or hair follicles. Often DNA left at a crime scene can be used to identify a perpetrator of a crime, in a process called genetic fingerprinting.

Down
4. Subject of Handel’s “Messiah” : JESUS
George Frideric Handel was the King of the oratorio. His most famous oratorio, “Messiah” was actually performed first in Dublin, Ireland, back in 1742.

6. 16th president’s nickname : ABE
President Abraham Lincoln was born in 1809 in Kentucky. The young Lincoln was given no middle name, and “Abraham” was chosen in honor of his paternal grandfather. Grandfather Abraham Lincoln was a captain in the militia during the American Revolution, and one of the pioneers who settled what is now the state of Kentucky.

7. Rap artist’s entourage : POSSE
I don’t think I’ll ever make it into a rapper’s “posse” …

9. National paper : USA TODAY
The title of widest circulation of any American newspaper is an honor competed for by “The Wall Street Journal” and “USA Today”, with each paper selling about 2 million copies daily (including online subscribers). “USA Today” was launched in 1982.

13. Long-eared hound : BASSET
The Basset Hound wouldn’t be my favorite breed of dog, to be honest. They do have a great sense of smell with an ability to track a scent that is second only to that of the Bloodhound. The name “Basset” comes from the French word for “rather low”, a reference to the dog’s short legs.

23. ___ Strauss jeans : LEVI
Levi Strauss was the founder of the first company in the world to manufacture blue jeans. Levi Strauss & Co. opened in 1853 in San Francisco. Strauss and his business partner were awarded a patent in 1873 for the use of copper rivets to strengthen points of strain on working pants.

33. Tooth covering : ENAMEL
Tooth enamel is the hardest substance in the human body. It is composed of 96% crystalline calcium phosphate.

35. Soccer spectator’s shout : OLE
“Ole Ole Ole!” is chanted at soccer games by many Spanish-speaking (or -shouting!) fans. I am very proud to claim that the fans of the Irish national team have adopted the chant as their own, and it can be heard practically non-stop when Ireland is playing (with some inventive melody behind it!).

36. Student of Socrates : PLATO
Plato was a Greek philosopher and mathematician. He was a student of the equally famous and respected Socrates, and Plato in turn was the teacher and mentor of the celebrated Aristotle.

40. “House Hunters” cable channel : HGTV
HGTV first went on air in 1994, as the “Home, Lawn and Garden Channel”. The name was shortened (the lawn was dropped) soon after, but nowadays it’s just known as HGTV.

46. Fairbanks’s home : ALASKA
Fairbanks is the second largest city in Alaska (second to Anchorage), home to almost 100,000 residents in the metropolitan area. The city was founded in 1901, and is named for Charles W. Fairbanks, a senator from Indiana and Vice President of the US, serving during Theodore Roosevelt’s second term as President.

52. So-called “white magic” : WICCA
Wicca is a relatively new phenomenon, a Neopagan religion that developed in the twentieth century. A follower of Wicca is called a Wiccan or a Witch.

62. Olive ___ (Popeye’s sweetie) : OYL
“Thimble Theater” was the precursor comic strip to the famous “Popeye” drawn by E. C. Seger. Before Popeye came into the story, the brother and sister characters Castor Oyl and Olive Oyl were the main protagonists. And then, along comes a sailor …

63. W. Hemisphere alliance : OAS
The Organization of American States (OAS) has its headquarters in Washington, D.C. All the independent states in the Americas are members of the group, except Honduras which had its membership suspended after the country’s 2009 coup.