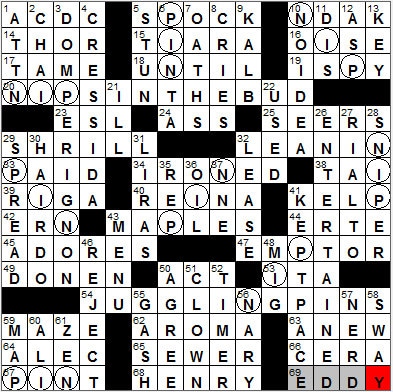 CROSSWORD SETTER: Dan Feyer
THEME: JUGGLING PINS … there are seven PINs JUGGLED around the grid, represented by the circled letters:


Today’s Wiki-est, Amazonian Googlies
Across
1. Band with the 22x platinum album “Back in Black” : AC/DC
Heavy Metal band AC/DC was formed by two brothers in Australia. The group is usually called “Acca Dacca” down under.

5. Second-in-command to Captain Kirk : SPOCK
Leonard Nimoy played the logical Mr. Spock on the original “Star Trek” television series. He has to be the most popular character on the show, and keeps popping up in “Star Trek” spin offs to this day. Nimoy first worked alongside William Shatner (Captain Kirk) in an episode of “The Man from U.N.C.L.E.” (I loved that show!), with Nimoy playing a bad guy, and Shatner an U.N.C.L.E. recruit.

10. State south of Manitoba: Abbr. : N DAK
Manitoba is the Canadian province that borders the US states of North Dakota and Minnesota. Even though Manitoba has an area of over 250,000 square miles, 60% of the population resides in the province’s capital city, Winnipeg.

14. Mythological hammer thrower : THOR
Thor is the Norse god of thunder, wielding his mighty hammer. One day of the week recognized by pagans during the time of the Roman Empire was Thor’s Day, named for the Norse god. We now know it as Thursday. Thor’s mother was Frigg, and she was honored on Frigg’s Day, which we now call Friday.

16. River to the Seine : OISE
The River Oise rises in Belgium and joins up with the River Seine just outside Paris.

19. TV show for which Bill Cosby won three Emmys : I SPY
The very successful TV show “I Spy” ran from 1965-68. Robert Culp played secret agent Kelly Robinson, opposite Bill Cosby who played Alexander Scott. I saw Bill Cosby perform live in San Jose not too long ago, and what a great evening it was! Sadly, Robert Culp passed away in 2010, pronounced dead after a fall just outside his home. He was 79 years old.

23. Immigrant’s course: Abbr. : ESL
English as a Second Language (ESL) is sometimes referred to as English for Speakers of Other Languages (ESOL) and English as a Foreign Language (EFL).

38. Mai ___ : TAI
The Mai Tai cocktail is strongly associated with the Polynesian islands, but it was supposedly invented in Trader Vic’s restaurant in Oakland, California in 1944. One recipe is 6 parts white rum, 3 parts orange curaçao, 3 parts Orgeat syrup, 1 part rock candy syrup, 2 parts fresh lime juice, all mixed with ice, and then a float of 6 parts dark rum.

39. Capital of Latvia : RIGA
Riga is the capital city of Latvia. The historical center of Riga is a UNESCO World Heritage Site, declared as such because of the city’s magnificent examples of Art Nouveau architecture.

42. Raptorial seabird : ERN
The ern (also erne) is also called the white-tailed eagle, and the sea-eagle.

A raptor is a bird of prey.

47. Caveat ___ : EMPTOR
“Caveat emptor” is a Latin expression meaning “Let the buyer beware”. It is used when someone buys something, emphasizing that after the deal is closed, there’s no going back.

49. Stanley who co-directed “Singin’ in the Rain” : DONEN
Along with Gene Kelly, Stanley Donen was the co-director of the 1952 musical “Singin’ in the Rain”. Donen also directed another great dance classic, 1951’s “Royal Wedding”, in which famously he had Fred Astaire dancing on the ceiling. Decades later in 1986, when Lionel Richie released his song “Dancing on the Ceiling”, he used Stanley Donen to direct the music video.

64. Smart ___ : ALEC
Apparently the original “smart alec” was Alec Hoag, a pimp, thief and confidence trickster who plied his trade in New York City in the 1840s.

66. Michael of “Arrested Development” : CERA
Michael Cera is a Canadian actor, a very talented young man who is riding high right now. He played great characters on the TV show “Arrested Development”, and the 2007 comedy-drama “Juno”. More recently he played the title role in “Scott Pilgrim vs. the World”.

68. Name of eight English kings : HENRY
Henry VIII was of course the English King with the most wives. Well, something rubbed off on his last wife, Catherine Parr. She was to become the English Queen with the most husbands! By the time she married Henry, she had been widowed twice, and after Henry died, she married once again.

Down
2. Spiced Indian tea : CHAI
Chai is a drink made from spiced black tea, honey and milk, with “chai” being the Hindi word for “tea”. We often called tea “a cup of char” growing up in Ireland, with “char” being our slang word for tea, derived from “chai”.

3. Pricey bubbly : DOM PERIGNON
Dom Pérignon is the name given to the prestige label of champagne from Moët et Chandon, the French winery. The label’s name honors the Benedictine monk, Dom Pérignon, who helped to improve the quality and production of champagne in the early 18th century. Although Dom Pérignon made major contributions to champagne production, many of the stories in which he figures are just myths. He did not “invent” champagne, nor sparkling wine in general. Nor did he say the famous words, “Come quickly, I am drinking the stars!”. That lovely line first appeared in a print advertisement in the late 1800s!

4. Lover of Troilus in a Shakespeare play : CRESSIDA
William Shakespeare wrote his tragedy “Troilus and Cressida” in 1602. It was inspired by “The Iliad”, and is a retelling of events during the Trojan War leading up to the death of Hector.

5. Gobsmack : STUN
“Gobsmack” is slang from the British Isles. “Gob” is also slang, for a mouth. So someone who is gobsmacked has received “a smack in the mouth”, is stunned.

6. Vessel of 1492 : PINTA
As we all know, Christopher Columbus used three ships in his first voyage across the Atlantic: the Santa Maria, the Niña and the Pinta. The Pinta was the fastest of the three, and it was from the Pinta that the New World was first spotted, by a sailor on lookout called Rodrigo de Triana. Pinta was a nickname (as was Niña), meaning “the painted one”. The Pinta’s real name has been lost in mists of time.

9. Former “Meet the Press” host Marvin : KALB
Marvin Kalb is a journalist most famous for his 30-year stint reporting for CBS and NBC News. Kalb was the last person to be recruited by journalism icon Edward R. Murrow.

12. Nile reptile : ASP
The asp is a venomous snake found in the Nile region of Africa. It is so venomous that the asp was used in ancient Egypt and Greece as a means of execution. Cleopatra observed such executions noting that the venom brought on sleepiness without any painful spasms. Therefore, when the great queen opted to commit suicide, the asp was her chosen method.

22. Like many items listed on eBay : USED
eBay is an auction site with a twist. If you don’t want to enter into an auction to purchase an item, there’s a “Buy It Now” price. Agree to pay it, and the item is yours!

The Rialto is the financial and commercial center of Venice, and has been so for centuries. One of the most famous features of the area is the Rialto Bridge that spans the Grand Canal.

31. Turkish “dollars” : LIRAS
The name “lira” is used in a number of countries for currency. It comes from the Latin word for a pound, and is derived from a British pound sterling, the value of a Troy pound of silver. The Turkish lira has been around since the mid 1870s.

57. Anyone who can speak Klingon, e.g. : NERD
Klingons are a warrior race often featured in the “Star Trek” franchise of shows. Back in the first “Star Trek” movie, the actor James Doohan (who played “Scottie”) put together some Klingon dialogue that was used in the film. For subsequent movies, the American linguist Marc Okrand was commissioned to develop a working Klingon language, which he duly did, using the original words from Doohan as its basis.

59. “The Amazing Race” necessity : MAP
I am not a huge fan of reality television, but I do watch “The Amazing Race” (usually while writing posts for this blog on my laptop!). I love to travel, and enjoy seeing the teams traverse the globe. The show’s host is Phil Keoghan. From his accent, I always thought that Keoghan was from the Boston area. He’s actually from New Zealand! Shows you how much I know about American accents …

60. “Prince ___” (“Aladdin” song) : ALI
The Disney animated feature “Aladdin” was released in 1992 and is one of the best features to come out of the studio, in my opinion, largely due to the great performance by Robin Williams who voiced the Genie. “Aladdin” was the most successful film of 1992, earning over $500 million worldwide, an unusual feat for an animated movie.

61. Buddhist state : ZEN
Zen is one of the Buddhist schools, and it developed it’s own tradition in China back in the 7th century AD. Zen is a Japanese spelling of the Chinese word “chan”, which in turn derives from the Sanskrit word “dhyana” meaning “meditation”.