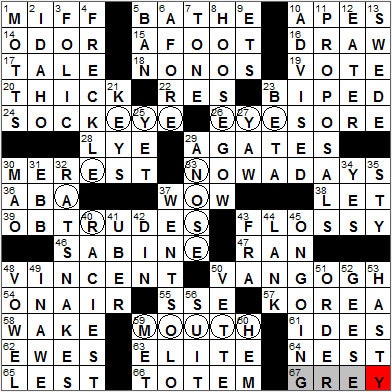 CROSSWORD SETTER: Elizabeth A. Long
THEME: VINCENT VAN GOGH … the circled squares in the grid (and the letters in those squares) represent the main features of a face. The fact that the left ear is missing tells us that we are looking at a representation of the face of the troubled artist Vincent van Gogh.
COMPLETION TIME: 9m 41s
ANSWERS I MISSED: 0


Today’s Wiki-est, Amazonian Googlies
1. Tick off : MIFF
“To miff” is “to put out, to tee off”, a word that has been around since the early 1600s. Interestingly, in 1824 Sir Walter Scott described the word “miffed” as “a women’s phrase”. That would get him a slap, I’d say …

17. Dickens wrote one about two cities : TALE
“A Tale of Two Cities” by Charles Dickens is the most printed book that was originally written in English. The two cities in the title are of course London and Paris.

22. In medias ___ : RES
“In media res” is a Latin phrase that translates as “into the middle of things”. We use it to describe a literary technique in which a story starts at some point other than the beginning of the plot.

24. Red salmon : SOCKEYE
The sockeye salmon is also known as the red or blueback salmon. The name “sockeye” comes from “suk-kegh”, a word from the native language of an indigenous people in British Columbia. “Suk-kegh” means “red fish”.

28. Cleaning substance : LYE
Lye can be used as a pretty harsh household cleaner, for example to clean an oven.

29. Banded marbles : AGATES
Agate is a micro-crystalline form of quartz (so is related to sand/silica). Some agate samples have deposited layers giving a striped appearance, and these are called “banded agate”.

46. River on the Texas/Louisiana border : SABINE
The Sabine River passes through the states of Louisiana and Texas, forming part of the border between the two states for some of its length. There are a lot of cypress trees growing along the rivers banks as it approaches the Gulf of Mexico. These trees give the river its name as “sabinas” is the Spanish for “cypress trees”.

48. With 50-Across, Dutch painter represented by this puzzle’s circled letters : VINCENT
50. See 48-Across : VAN GOGH
Gauguin visited Van Gogh in Arles in 1888. At one point the two argued quite violently, with Van Gogh eventually threatening his friend with a razor blade. In a panic, Van Gogh fled the house and made his way to a local brothel. Famously, that night he cut off his own left ear.

55. Cairo-to-Addis Ababa dir. : SSE
Cairo is the capital city of Egypt. It is the largest city on the continent of Africa, and is nicknamed “The City of a Thousand Minarets” because of its impressive skyline replete with Islamic architecture. The name “Cairo” is a European corruption of the city’s original name in Arabic, “Al-Qahira”.

Addis Ababa is the capital city of Ethiopia. The city is relatively young, having being founded in 1886 by Emperor Menelik II.

57. It used to be called the Hermit Kingdom : KOREA
South Koreans sometime refer to their country, before it entered the modern era, as the Hermit Kingdom. The use of the term reflects the country’s old isolationist policy. Today North Korea is often called a “hermit kingdom” as the North Korean government is relatively reluctant to engage with the outside world.

62. Ovine mothers : EWES
The Latin word for “sheep” is “ovis”, giving us the adjective “ovine”, meaning “like a sheep”.

65. “___ we forget” : LEST
“Lest we forget” is an oft-quoted phrase, one that comes from a poem by Rudyard Kipling called “Recessional”. Kipling wrote the piece on the occasion of the Diamond Jubilee of Queen Victoria in 1897, and used it to express sadness at the waning of the British Empire. The phrase “lest we forget” is used in this context, a warning that the empire will decline. Ever since WWI we’ve been using the words on memorials as a plea not forget the sacrifices made by others in the past.

66. Indian emblem : TOTEM
Totem is the name given to any entity that watches over a group of people. As such, totems are usually the subjects of worship. Totem poles are really misnamed, as they are not intended to represent figures to be worshiped, but rather are heraldic in nature often celebrating the legends or notable events in the history of a tribe.

67. “Pardon me, would you have any ___ Poupon?” : GREY
Grey Poupon mustard dates way back to 1777 when Maurice Grey started making mustard with Auguste Poupon in Dijon, France.

Dijon is a city in eastern France, in the Burgundy region. Dijon is famous for its mustard, a particularly strong variation of the condiment. The European Union doesn’t protect the name “Dijon” so anyone can use it on a label. That seems fair enough to me given that 90% of the mustard made in and around Dijon is produced using mustard seed imported from Canada!

Down
1. Applesauce maker : MOTT’S
Samuel R. Mott was a producer of apple cider and vinegar. In 1842 he founded his own company to market and sell his products. The company (now part of the Dr. Pepper Snapple Group) owns brands such as Mr & Mrs T, Hawaiian Punch and ReaLime/ReaLemon.

2. The 43rd state : IDAHO
Idaho has the nickname the Gem State, mainly because almost every known type of gemstone has been found there. Idaho is also sometimes called the Potato State as potatoes are such a popular crop in the state.

3. Kind of acid in breakfast cereal : FOLIC
Folic acid is also known as vitamin B9. Folic acid occurs as folate in the human body, a substance essential in the synthesis and repair of DNA.

8. Slammer : HOOSEGOW
“Hoosegow” is a slang term for “jail”. It is a mispronunciation of the Mexican-Spanish word “juzgao” meaning “court” or “tribunal”.

9. Flying saucer fliers, for short : ETS
“Aliens” is a 1986 sequel to the very successful science-fiction movie “Alien” released in 1979. “Aliens” was filmed at Pinewood Studios in England, and at the decommissioned Acton Lane Power Station in London.

11. Season-ending events on “The Bachelor” : PROPOSALS
“The Bachelor” is a US reality television show that first aired in 2002 on ABC. I’ve avoided this one like the plague …

12. “Peter Peter Pumpkin ___” : EATER
“Peter, Peter Pumpkin Eater” is a nursery rhyme here in the US at least since the early 1800s. It is possibly derived from an older English rhyme, but pumpkins certainly weren’t in the English version.

13. Writer Stieg Larsson, e.g. : SWEDE
“The Girl with the Dragon Tattoo” is a sensational hit novel by the Swedish author Stieg Larsson, originally titled in Swedish as “Men Who Hate Women”. It is the first in a trilogy of successful books, all of which were published after Larsson’s death in 2004.

27. Go slightly off course : YAW
The word “yaw” means to deviate from the line of a course and is used mainly at sea. “Yaw” is derived from the Old Norse word “jaege” which means “to drive, chase”. As such, “yaw” is etymologically related to our word “yacht”.

30. Chinese chairman : MAO
Mao Zedong was born on December 16, 1893 in the Hunan Province of China. As he was the son of a peasant farmer his prospects for education were limited. Indeed he left school at age 13 to work on the family farm but did eventually get to secondary school in Changsa, the provincial capital. In the years following he continued his education in Beijing, and actually turned down an opportunity to study in France.

32. Rodent-eating reptiles : RAT SNAKES
Rat snakes are constrictors that feed primarily on rodents and birds. They apparently make great pets, but not in this house …

40. Most risqué : RACIEST
“Risqué” is of course a French word, the past participle of the verb “to risk”. So in English we use “risqué” to mean “racy”, but in French it means “risky”.

41. “Deutschland ___ Alles” : UBER
I’m afraid that I thought that Germany’s national anthem was called “Deutschland Uber Alles”. In fact, these are just words from the refrain. The anthem is called “Das Lied der Deutschen” (“the Song of the Germans”) with words put to music written by Joseph Haydn in 1797.

Pat Sajak took over the hosting of “Wheel of Fortune” back in 1983, and has been doing the job ever since. He had a short run as a talk show host in 1989/1990, and has subbed quite often for Larry King and Regis Philbin.

50. Sting Ray, e.g., informally : VETTE
The Chevrolet Corvette was introduced to the world in 1953, and was named after the small maneuverable warship called a corvette. The Corvette has legs. It is the only American sports car that has been around for over 50 years.

51. “Large pepperoni with extra cheese,” e.g. : ORDER
Pepperoni originated in the US and is reminiscent of a spicy salami sausage from southern Italy. The name “pepperoni” is a corruption of the Italian “peperone”, the name for the red or green pepper plant.

52. V-formation fliers : GEESE
Apparently geese fly in that V-formation for a couple of reasons. One is that it makes for efficient flight and conserves energy. The leading bird gets no advantage, but every following bird gets to “slipstream” a little. It has been noted that the lead bird drops to the back of the formation when he/she gets fatigued. It’s also thought that the flock can stick together more easily when in formation, so it is more difficult to lose someone along the way.