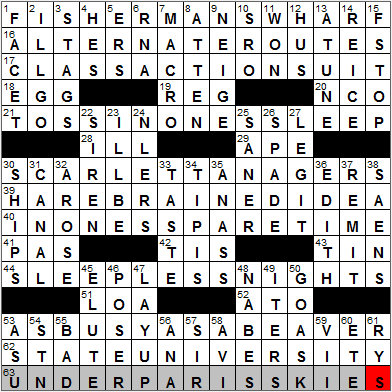 1. Starting point for a ferry ride to Alcatraz : FISHERMAN’S WHARF
Fisherman’s Wharf is the name given to what is now a tourist mecca at the northern limits of San Francisco, right on San Francisco Bay. Historically it is where the city’s fishing fleet was moored and so the neighborhood became associated with the fishing community that was mainly made up of Italian immigrants.

Alcatraz Island sits in the middle of San Francisco Bay, and today is a National Park. The island was named back in 1775 by the Spanish who charted the Bay. It was known as “La Isla de los Alcatraces”, or “The Island of the Pelicans”. In modern Spanish though, the word “Alcatraz” is used for a gannet.

30. North American singers with raspy notes : SCARLET TANAGERS
The Scarlet Tanager is a beautiful-looking bird, truly scarlet in color other than its wings and tail. It is in the cardinal family.

39. Bozo’s suggestion : HARE-BRAINED IDEA
A “bozo” is a man with a low IQ, and one who is usually quite muscular. We’ve been using the word since the early 1900s and it possibly comes from the Spanish “bozal” that described someone who speaks Spanish poorly.

62. Appalachian, e.g. : STATE UNIVERSITY
Appalachian State University is located in Boone, North Carolina. The college campus is in the Blue Ridge Mountains at an elevation of 3,333 feet, making it one of highest universities east of the Mississippi River.

63. 1953 hit for Mitch Miller : UNDER PARIS SKIES
Mitch Miller was an American musician and conductor, very popular in the fifties and sixties. Early in his career Miller was a successful oboe and English horn player. He played the very recognizable horn part in the largo movement from Dvořák’s “New World Symphony” in a famous recording conducted in 1947 by Leopold Stokowski.

Down
3. Some wild parties : STAGS
4. Attendees of 3-Down : HES
Back where I come from, bachelor parties are called stag parties, and bachelorette parties are hen parties. And in Ireland the fairer sex usually isn’t welcome at a stag party, not even for entertainment purposes. We tend to focus on the drink …

6. Makeup of some strands : RNA
Ribonucleic Acid (RNA) is an essential catalyst in the manufacture of proteins in the body. The genetic code in DNA determines the sequence of amino acids that make up each protein. Amino acids are delivered in the correct sequence by what is called transfer RNA and then formed into proteins by ribosomal RNA.

12. Czech religious reformer Jan : HUS
Jan Hus was Czech priest, famous today for having been burnt at the stake in 1415 as he was deemed guilty of heresy against the Catholic Church. Hus was an important contributor to Protestantism, over 100 years before Martin Luther made his famous proclamations.

15. Shooting setting : F-STOP
Varying the f-stop in a lens varies how big the lens opening (the aperture) is when the photograph is taken. Smaller apertures (higher f-stop values) admit less light, but result in sharper photographs.

24. Mr. Cub and others : NLERS
First baseman Ernie Banks was known as “Mr. Cub”, and played his entire 19-year professional career with the Chicago Cubs.

26. One may take your heart : SPADE
In some card games, a spade might take a heart.

30. Things traveling on sound waves? : SHIPS
Ships might travel through a sound, a wide channel connecting two bodies of water, or an ocean inlet.

34. Plains homes: Var. : TIPIS
A tepee (also written as “tipi” and “teepee”) is a cone-shaped tent traditionally made from animal hides, and used by the Great Plains Native Americans. A wigwam is a completely different structure, and is often a misnomer for a tepee. A wigwam is a domed structure built by Native Americans in the West and Southwest, intended to be a more permanent dwelling. The wigwam can also be covered with hides, but more often was covered with grass, reeds, brush or cloth.

“Much Ado About Nothing” is a favorite of mine, a play of course by William Shakespeare. It is a comedic tale of two pairs of lovers with lots of mistaken identities and double meanings. I once saw it performed in the fabulous Globe Theatre in London … by an all-female cast!

36. Head of design : EDITH
Edith Head was a Hollywood costume designer. She won eight Academy Awards for Best Costume Design for her work on movies including 1951’s “All About Eve”, 1954’s “Roman Holiday” and 1955’s “Sabrina”. Head won more Oscars than any other woman in history in any category.

37. Cancel : REMIT
“To remit” usually means to send money, make a payment. It can also mean to cancel say a tax or a financial penalty.

38. Saint-___ (Delibes contemporary) : SAENS
Camille Saint-Saens was one of the great French composers in my opinion. Even his light and airy “The Carnival of the Animals” is a lovely work.

Léo Delibes was a French composer, famous for the ballets “Coppélia” and “Sylvia”, as well as the operas “Le roi l’a dit” and “Lakmé”. Even if you’re not a fan of ballet or even classical music, I guarantee you’ll recognize his “Divertissement – Pizzicato from ‘Sylvia’”.

45. Dissolve out : ELUTE
Elution is a technique that I used to employ many years ago when I worked as a biochemist. Elution is the extraction of one material from a mixture by washing it out with a solvent. Often this is done with the help of solid substance that adsorbs one material in the mixture, so that the second, unadsorbed material can easily be dissolved and collected.

47. It’s not a long shot : LAY UP
In golf a “lay up” is a shot taken that is shorter than usual, often chosen to make sure one that doesn’t end up in a hazard.

48. Local theaters : NABES
A “nabe” is a neighborhood, or familiar term for a local movie theater. Although I’ve never heard “nabe” in this neighborhood …

49. Anatomical aqueducts : ITERS
An “iter” is an anatomical passageway, from the Latin word for “journey”.

50. “___ Alice” (1971 antidrug book) : GO ASK
“Go Ask Alice” was first published in 1971 and was promoted as a non-fiction work, a diary written by an anonymous 15-year-old girl. The diary tells of the girl’s journey into drug addiction. It is now believed that “Go Ask Alice” was largely written by the book’s editor, Beatrix Sparks, and is a work of fiction.

56. Santa ___ : ANA
Santa Ana is the county seat of Orange County, California, taking its name from the Santa Ana River that runs through the city. The Santa Ana winds are the very dry air currents that sweep offshore late in the year in Southern California. Because they are so dry, they are noted for their influence over forest fires in the area, especially in the heat of the fall. The winds arise from a buildup of air pressure in the Great Basin that lies between the Rocky Mountains and the Sierra Nevada. Under the right conditions, that air spills over the peaks of the Sierra Nevada and basically “falls” down the side of the Sierra range, heading for the ocean. As the air falls it becomes drier and heats up, so that relative humidity can fall to below 10% by the time it hits the coast.

59. Last article of the U.S. Constitution : VII
The US Constitution is composed of a preamble, seven articles and twenty-seven amendments.

Article VII of the US Constitution deals with its ratification. It called for nine states to ratify the wording of the Constitution before it would take effect.

60. Dijon toasting time? : ETE
In Dijon, France the weather is toasty warm in the summer (“été”).

Dijon is a city in eastern France, in the Burgundy region. Dijon is famous for its mustard, a particularly strong variation of the condiment. The European Union doesn’t protect the name “Dijon” so anyone can use it on a label. That seems fair enough to me given that 90% of the mustard made in and around Dijon is produced using mustard seed imported from Canada!

61. Roads with train tracks: Abbr. : RYS
I guess RYS is an abbreviation for railways, although I’m not sure …