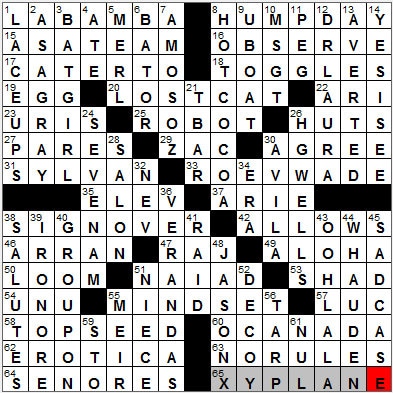 1. Only song on Rolling Stone’s “500 Greatest Songs of All Time” list that is not sung in English : LA BAMBA
“La Bamba” is a Mexican folk song that was recorded by Ritchie Valens in 1958. “La Bamba” appears in the oft-cited list of the 500 Greatest Songs of All Time compiled by “Rolling Stone” magazine, and is the only song in the list not sung in English. The song lent its name to the 1987 biopic about the life of Ritchie Valens, with actor Lou Diamond Phillips playing the great singer.

23. “A God in Ruins” novelist : URIS
Leon Uris as an American writer. His most famous books are “Exodus” and “Trinity”, two excellent stories, in my humble opinion.

25. Man of steel? : ROBOT
R.U.R. is a play written in Czech by Karel Capek, first produced in 1921. It is a science fiction work and is remembered in part for introducing the world to the word “robot”. The words “automaton” and “android” were already in use, but Capek gave us “robot” from the original Czech “robota” meaning “forced labor”.

26. Gridiron cues : HUTS
We never used the word “gridiron” when I was growing up (meaning a grill used for cooking food over an open fire). So, maybe I am excused for finding out fairly recently that a football field gridiron is so called because the layout of yard lines over the field looks like a gridiron used in cooking!

31. Shady, say : SYLVAN
A sylvan area is wooded, covered in trees. “Silva” is the Latin word for “forest”.

33. Frequently disputed court call? : ROE V WADE
Roe v. Wade was decided in a US District Court in Texas in 1970, and reached the Supreme Court on appeal. The basic decision by the Supreme Court was that a woman’s constitutional right to privacy applied to an abortion, but that this right had to be balanced with a state’s interest in protecting an unborn child and a mother’s health. The Court further defined that the state’s interest became stronger with each trimester of a pregnancy. So, in the first trimester, the woman’s right to privacy outweighed any state interest. In the second trimester, the state’s interest in maternal health was deemed to be strong enough to allow state regulation of abortion for the sake of the mother. In the third trimester, the viability of the fetus dictated that the state’s interest in the unborn child came into play, so states could regulate or prohibit abortions, except in cases where the mother’s life was in danger. I’m no lawyer, but that’s my understanding of the initial Supreme Court decision …

37. First name in auto racing : ARIE
Arie Luyendyk is a racing driver from the Netherlands, winner of the Indianapolis 500 on two occasions. Luyendyk’s son, also called Arie, is following in his father’s footsteps and is also an auto racer.

46. Island near Ayr : ARRAN
The Isle of Arran is in Scotland, in the Firth of Clyde. It is often confused with the Aran Islands off the west coast of Ireland because of the similarity in names.

49. Welcome to paradise? : ALOHA
Aloha has many meanings in English: affection, love, peace, compassion and mercy. More recently it has come to mean “hello” and “goodbye”, but only since the mid-1800s.

51. Charybdis, e.g. : NAIAD
The Naiads of Greek mythology were water nymphs, associated with fountains, wells, springs and streams. The saltwater equivalents to the freshwater Naiads were the Oceanids.

53. Source of some highly prized 19-Acrosses : SHAD
The shad is also known as the river herring. The eggs of the female shad are prized as a delicacy in the Eastern US.

57. Robitaille of the N.H.L. : LUC
Luc Robitaille is a retired professional hockey player, mostly known for his career with the Los Angeles Kings. He holds the record as the highest-scoring left winger in the history of the NHL.

60. Northern air : O CANADA
Canada’s national anthem was commissioned in 1880 by the Lieutenant Governor of Quebec, so the original words are in French. The first English translation was made in 1906. The current English lyrics have been revised a few times, but the French version remains the same as it did back in 1880.

2. Name on the highest award of the American Society of Plant Taxonomists : ASA GRAY
Asa Gray was an important American botanist in the nineteenth century. He was a lifelong friend of Charles Darwin, albeit mainly through correspondence. Darwin’s book “Forms of Flowers”, was dedicated to Gray.

6. Mongolian for “hero” : BATOR
The name “Ulan Bator” translates from Mongolian as “the Red Hero”, and is Mongolia’s capital city. The “Red Hero” name was chosen in honor of the country’s national hero, Damdin Sükhbaatar. Sükhbaatar fought alongside the Soviet Red Army in the fight from liberation from Chinese occupation.

7. “A Perfect Peace” novelist : AMOS OZ
Amos Oz is an Israeli writer. He has written 18 books in Hebrew and his work has been translated into 30 languages, including Arabic.

9. Wolf pack member : U-BOAT
U-boat stands for the German “Unterseeboot” (undersea boat). U-boats were primarily used in WWII to enforce a blockade against enemy commercial shipping, with a main objective being to cut off the supplies being transported to Britain from British colonies and the US. The epic fight for control of the supply routes became known as the Battle of the Atlantic.

11. Tuning device : PEG
Tuning pegs are used to tighten and loosen strings on many musical instruments in order to change their pitch.

21. Boarder’s aid : T-BAR
A T-bar is a type of ski lift in which the skiers are pulled up the hill in pairs, with each pair sitting either side of T-shaped metal bar. The bar is placed behind the thighs, pulling along the skier who remains standing on his/her skis (hopefully!). There’s also a J-bar, a similar device, but with each J-shaped bar used by one skier at a time.

26. Writer on whose work Woody Allen’s “Sleeper” is loosely based : H. G. WELLS
Woody Allen’s 1973 movie “Sleeper” is a sci-fi piece in which Allen plays an average man cryogenically frozen and defrosted 200 years into the future. This is one of those vehicles for Woody Allen playing opposite Diane Keaton. I tried watching it a couple of times, but failed miserably to sit through it. The film’s storyline plays on several works of science-fiction, including “The Sleeper Awakes” by H. G. Wells and “Nineteen Eighty-Four” by George Orwell.

32. Home of Pyramid Lake: Abbr. : NEV
Pyramid Lake is a relatively salty body of water situated 40 miles northeast of Reno, Nevada. The lake is fed by the Truckee River, but does not have an outlet. Instead, water seeps out through the lake bottom and is also lost via evaporation. It is this evaporation that has led to concentration of dissolve salts over time.

34. Christian ___ : ERA
The designations Anno Domini (AD, “year of Our Lord”) and Before Christ (BC) are found in the Julian and Gregorian calendars. The dividing point between AD and BC is the year of the conception of Jesus, with AD 1 following 1 BC, without a year “0” in between. The AD/BC scheme dates back to AD 525, and gained wide acceptance soon after AD 800. Nowadays, a modified version has become popular, with CE (Common/Christian Era) used to replace AD, and BCE (Before the Common/Christian Era) replacing BC.

39. Major export of Brazil and Australia : IRON ORE
Iron ore comes in a number of different forms, like magnetite (the most magnetic of all minerals) and hematite (the most commonly exploited iron ore).

40. Marketing giant with a portmanteau name : GROUPON
Groupon is a relatively young company, a deal-of-the-day type website that was started in 2008. The concept behind the business is illustrated by the company name, a portmanteau of “group coupon”. Each day a discount coupon is offered to website members who sign up knowing that the coupon requires a minimum number of “takers” in order for it to be valid. If too few buyers sign up, then the coupon is void. When sufficient buyers sign up the coupon is honored, and the retailer benefits from the large volume of business generated. Groupon is so successful that it is predicted it will reach $1 billion in sales faster than any other company in history.

44. “Poetry makes nothing happen” writer : W. H. AUDEN
The noted poet W. H. Auden was born and raised in England, but eventually became a US citizen. As well as hundreds of poems, Auden also wrote librettos for operas, including Igor Stravinsky’s “The Rake’s Progress”.

48. 2002 horror sequel : JASON X
I really don’t watch horror movies, especially those in the slasher genre. “Jason X” is the tenth film in the “Friday the 13th” series. Apparently Jason goes into space in this “episode”. I guess the writers are running out of ideas …

55. Bergman’s last role : MEIR
“A Woman Called Golda” is a 1982 movie made for television about the life of the Israeli Prime Minister Golda Meir. Ingrid Bergman played the title role, the last performance of her career. Bergman died four months after the film was released.

56. Response to the ’08 financial crisis : TARP
The Troubled Asset Relief Program (TARP) was a step taken by the Bush administration to strengthen financial institutions during the sub-prime mortgage crisis of 2008. The idea was for the US government to “save” the banking sector by buying up all their bad mortgages.

59. Pou ___ (vantage point) : STO
Pou sto is Greek, meaning “where I may stand”. The phrase has it roots in words spoken by Archimedes, who said that he could move the earth if given a place to stand. In contemporary use it describes a place on which to stand, or a basis of operation.