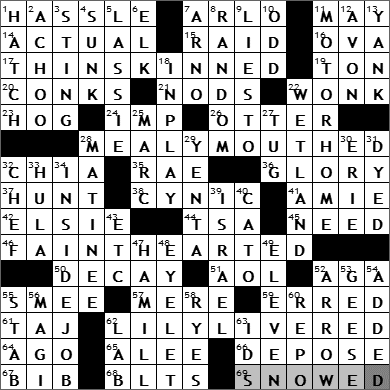 CROSSWORD SETTER: Lynn Lempel
THEME: Adjectival Body Parts … all of the theme answers are adjectives that include parts of the body:

7. Folk singer Guthrie : ARLO
Arlo Guthrie is the son of Woody Guthrie. Both father and son are renowned for their singing of protest songs about social injustice. Arlo is most famous for his epic “Alice’s Restaurant Massacree”, a song that lasts a full 18m 34s. In the song, Guthrie tells how, after being drafted, he was rejected for service in the Vietnam War based on his criminal record. He had only one incident on his public record, a Thanksgiving Day arrest for littering and being a public nuisance when he was 18-years-old.

11. Month of the Indianapolis 500 : MAY
The first Indy 500 race was held on Memorial Day in 1911. The winner that day was one Ray Harroun. He had seen someone using a rear view mirror on a horse-drawn vehicle, and decided to fit one on his Marmon “Wasp” motor car. Supposedly that was the first ever use of a rear view mirror on a motor vehicle.

14. Bona fide : ACTUAL
Bona fide(s), translates from the Latin as “in good faith”, and is used to indicate honest intentions. It can also mean that something is authentic, like a piece of art that is represented in good faith as being genuine.

20. Hits on the noggin : CONKS
To conk means to strike, especially on the head. Where I grew up, “conk” was also slang for a nose.

22. Policy expert : WONK
A wonk is an overly studious person. It is an American slang term that has been around at least since 1954.

28. Inclined to mince words : MEALY-MOUTHED
Someone who is described as mealymouthed tends not to state opinions directly and simply, and sounds hesitant.

32. ___ Pet (sprouting figurine) : CHIA
Chia is a flowering plant in the mint family, and the Chia Pet is an invention of a San Francisco company. It did well in the eighties selling terracotta figurines to which were applied moistened chia seeds. The seeds sprout and as they grew the seedlings become the “fur” of the Chia Pet.

35. Filmdom’s “Norma ___” : RAE
“Norma Rae” is a 1979 movie starring Sally Field, a tale of union activities in a textile factory in Alabama. The film is based on the true story of Crystal Lee Sutton told in a 1975 book called “Crystal Lee, a Woman of Inheritance”.

36. Old ___ (U.S. flag) : GLORY
The first person to coin the phrase “Old Glory”, with reference to the American flag, was Captain William Driver, a ship master from Salem, Massachusetts. As he was leaving on an 1831 voyage aboard the brig Charles Doggett, he unfurled the American flag that he had just been given by a group of friends. As the flag caught the breeze, he uttered the words, “Old Glory!”. That’s the story anyway. By the way, on that same voyage, Charles Doggett rescued the famous mutineers of the HMS Bounty, after he found them on Pitcairn Island.

42. Dairy spokescow : ELSIE
Elsie the Cow is the mascot of the Borden Company. Elsie first appeared at the New York World’s Fair in 1939, introduced to symbolize the perfect dairy product. Elsie was also given a husband, Elmer the Bull, who eventually moved over to the chemical division of Borden where he gave his name to Elmer’s Glue.

44. Air passenger protection org. : TSA
The Transportation Security Administration was of course created in 2001, soon after the 9/11 attacks.

51. Yahoo! alternative : AOL
Founded as Quantum Computer Services in 1983, America Online changed its name in 1989. As the company went international, the acronym AOL was used in order to shake off the “US-centric” sound to “America Online”. During the heady days of AOL’s success, the company could not keep up with the growing number of subscribers, so people trying to connect often encountered busy signals. That’s when users called AOL “Always Off-Line”.

52. Respectful Turkish title : AGA
An aga, or agha, is a title that was used by both civil and military officials in the Ottoman Empire.

55. Peter Pan pursuer : SMEE
In J. M. Barrie’s play and novel about Peter Pan, Smee is one of Captain Hook’s pirates and his right-hand man. He is described by Barrie as being “Irish” and “a man who stabbed without offence”. Nice guy!

61. ___ Mahal : TAJ
The most famous mausoleum in the world has to be the Taj Mahal in Agra, India. The Taj Mahal was built after the death of the third wife of Shah Jahan, Mumtaz Mahal (hence the name of the mausoleum). The poor woman died in childbirth, delivering the couple’s 14th child!

62. Cowardly : LILY-LIVERED
Someone who is described as “lily-livered” is cowardly or timid. The term may have originated in “Macbeth” , where Shakespeare used it as an insult, with “lily” meaning pale or bloodless, and referring to the liver, the supposed seat of love and passion. So, an anemic liver might belong to a person lacking passion and courage.

65. Sheltered at sea : ALEE
“Alee” is the direction away from the wind. If a sailor points into the wind, he or she is pointing “aweather”.

68. Nonvegetarian sandwiches, informally : BLTS
The BLT (bacon, lettuce and tomato) is the second most popular sandwich in the US, after the plain old ham sandwich.

Down
2. Sound heard before “Gesundheit!” : ACHOO
“Gesundheit” is the German word for “health”, and is used in response to a sneeze in Germany, as indeed it is here in the US.

5. Timmy’s TV dog : LASSIE
We owe the character Lassie to one Eric Knight who wrote a short story that he expanded into a novel called “Lassie Come Home”, published in 1940. “Lassie Come Home” was turned into a movie three years later, the first of a very successful franchise. The original Lassie (a female) was played by a dog called Pal, a male dog. In fact, all of the dogs that played Lassie over the years were males, because they looked better on camera, retaining a thick coat even during the summer months.

6. Fraternal lodge member : ELK
The Benevolent and Protective Order of Elks was founded in 1868, and is a social club that has about a million members today. It started out as a group of men getting together in a “club” in order to get around the legal opening hours of taverns in New York City. The club took on a new role as it started to look out for poor families of members who passed away. The club now accepts African Americans as members (since the seventies) and women (since the nineties), but atheists still aren’t welcome.

7. River through Florence : ARNO
The Arno is the principal river in the Tuscany region of Italy, and passes through the cities of Florence and Pisa. Famously, the Arno flooded in 1966, the worst flood in the region for centuries. There were numerous deaths and extensive destruction of priceless art treasures, particularly in Florence.

12. River beside the Royal Shakespeare Theatre : AVON
There are actually four River Avons in England, but “Shakespeare’s Avon” lies mainly in Warwickshire. The name “Avon” comes from the Old English word for a river, “abona”. Stratford-upon-Avon was of course William Shakespeare’s birthplace.

25. Painter Chagall : MARC
Marc Chagall was a Russian-French artist, one of the most successful of the 20th century. Unlike so many painters, Chagall was able to achieve wealth and notoriety for his work during his own lifetime. It did help that Chagall lived to a ripe old age though. He passed away in 1985, at the age of 97 years young.

28. Show for the early-to-bed crowd : MATINEE
“Matinée” is a French word for a musical entertainment held during the daytime. It is derived from the word “matin”, meaning “morning”, although here is used in the sense of “daylight”. Theater performances in the US tend to be either in the evening (for the night owls) or in matinees in the afternoon (for “the early-to-bed crowd”).

29. Busybody : YENTA
Yenta (Yente) is actually a female Yiddish name. In Yiddish theater it came to mean a busybody.

33. Luau dance : HULA
Hula is the name of the Polynesian dance. The chant or song that the dance illustrates, that’s known as the mele.

39. Zionist’s homeland : ISRAEL
The name “Zion” first turns up in the Book of Solomon in the Bible. Zion is commonly used to refer to Jerusalem, and sometimes the Biblical land of Israel.

40. “Elder” or “Younger” Roman statesman : CATO
Cato the Younger was a politician in the late Roman Republic, noted for his moral integrity. He is also remembered for an extended conflict with Julius Caesar.

Cato the Elder was a Roman statesman, known historically as “the elder” in order to distinguish him from his great-grandson, Cato the Younger. His ultimate position within Roman society was that of Censor, making him responsible for maintaining the census, and for supervising public morality.

43. And so forth, for short : ETC
Et alii is the equivalent of et cetera, with et cetera being used in place of a list of objects, and et alii used for a list of names.

47. Champion figure skater Dorothy : HAMILL
Dorothy Hamill was the Olympic and World Champion singles figure skater in 1976. She was noted for the “Hamill camel”, a skating move that started with a camel spin and transitioned into a sit spin.

56. Biblical gift bearers : MAGI
Magi is the plural of the Latin word “magus”, a term applied to someone who was able to read the stars. Hence, magi is commonly used with reference to the “wise men from the East” who followed the star and visited Jesus just after he was born.