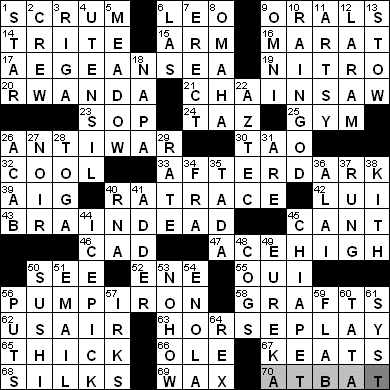 1. Rugby scuffle : SCRUM
If you’ve ever seen a rugby match, you’ll recognize the scrum, where the players designated as “forwards” bind together and push against the forwards on the opposing team. It’s a way of restarting the game after various types of stoppages. Scrum is short for “scrummage”, which in itself is a variation of “scrimmage”. And “scrimmage” has its roots in the word “skirmish”. If you get the chance, take a look at the Matt Damon, Morgan Freeman movie “Invictus

“, directed by Clint Eastwood. It’s all about rugby in South Africa after Nelson Mandela came to power. A powerful film …

16. Tennis’s ___ Safin : MARAT
Marat Safin is a tennis player from Russia, now retired. He is known for having a fiery temper on the court, and in one season broke a total of 87 racquets in outbursts, a record that stands to this day.

19. Explosive liquid, for short : NITRO
Nitroglycerin is a very unstable, oily, colorless liquid. It is usually used as the explosive ingredient in a stabilized product like dynamite or cordite. Nitroglycerin is also used medically, as a vasodilator. Right after it hits the bloodstream is causes the blood vessels to dilate to that the heart has less work to do. I had occasion to take it a couple of times, and boy, what a speedy and fundamental effect it has.

20. Landlocked African country : RWANDA
The Tutsi are the second largest population of people in Rwanda, with the Hutu being the largest group. The bloody conflict that has existed between the Tutsi and Hutu peoples dates back to about 1880 when Catholic missionaries arrived in the region. The missionaries found that they had more success converting the Hutus than the Tutsi, and when the Germans occupied the area during WWI they confiscated Tutsi land and gave it to Hutu tribes in order to reward religious conversion. This injustice fuels the fighting to this very day.

24. Devil in Looney Tunes cartoons, informally : TAZ
The carnivorous marsupial known as the Tasmanian devil is aptly named, in the sense that the only place it is found in the wild is on the island of Tasmania. The “little devils” are about the size of a small dog, and they have the strongest bite for their size of any known mammal.

30. Eastern “way” : TAO
The Chinese character “tao” translates as “path”, but the concept of Tao signifies the true nature of the world.

39. Bailed-out insurance co. in 2008-09 news : AIG
AIG is the American International Group, a giant insurance corporation (or I should say, it was). After repeated bailouts by American taxpayers, the company made some serious PR blunders by spending large amounts of money on executive entertainment and middle management rewards. These included a $444,000 California retreat, an $86,000 hunting trip in England, and a $343,000 getaway to a luxury resort in Phoenix. Poor judgment, I’d say …

62. Pan Am competitor : US AIR
From 1953, what today is US Airways was called Allegheny Airlines. In the seventies customers became very dissatisfied with the company’s service levels as it struggled to manage a rapid expansion in its number of flights. These problems earned the airline the nickname “Agony Air”. Allegheny tried to leave the “agony” behind in 1979 and changed its name to USAir. More recently, in 1997, the name was again changed, to US Airways.

67. “Ode on Melancholy” poet : KEATS
“Ode on Melancholy” was one of the so-called “1819 Odes” written by the poet John Keats, a collection that included famous poems such as “Ode on a Grecian Urn”, “Ode to a Nightingale” and “Ode to Psyche”.

3. Latvia’s capital : RIGA
Riga is the capital city of Latvia. The historical center of Riga is a UNESCO World Heritage Site, declared as such because of the city’s magnificent examples of Art Nouveau architecture.

6. ___ Vegas : LAS
Back in the 1800s, the Las Vegas Valley was given its name from the extensive meadows (“las vegas” is Spanish for “the meadows”) present in the area courtesy of the artesian wells drilled by local farmers. Las Vegas was incorporated as a city in 1905, in the days when it was a stopping-off point for pioneers travelling west. It eventually became a railroad town, although with the coming of the railroad growth halted as travelers began to bypass Las Vegas. The city’s tourism industry took off in 1935 with the completion of the nearby Hoover Dam, which is still a popular attraction. Then gambling was legalized, and things really started to move. Vegas was picked, largely by celebrated figures in “the mob”, as a convenient location across the California/Nevada state line that could service the vast population of Los Angeles. As a result, Las Vegas is the most populous US city founded in the 20th century (Chicago is the most populous city founded in the 19th century, just in case you were wondering).

9. Hyatt alternative : OMNI
Omni Hotels & Resorts is headquartered in Irving, California and has properties in the US, Canada and Mexico.

11. Bohemian : ARTSY
Bohemia covers most of the Czech Republic. Centuries ago, it was wrongly believed that gypsies came from Bohemia, giving rise to the term “Bohemian” meaning a “gypsy of society”.

22. Ancient Mexican pyramid builder : AZTEC
The Aztec people of Central America dominated the region in the 14th – 16th centuries. Two traits of the Aztec people are oft cited today. They built some magnificent pyramids, and they also engaged in human sacrifice. The two traits were linked in a way … for the consecration of the Great Pyramid of Tenochtitlan, 84,400 prisoners were sacrificed over a period of four days.

27. Pinot ___ (wine) : NOIR
The Pinot noir wine grape variety takes its name from the French for “pine” and “black”. The grapes grow in tight clusters shaped like pine cones, and are very dark in color. The Pinot noir grape is most closely associated with Burgundy wines in France, although in recent years the popularity (and price) of California Pinot noir wine has soared after it featured so prominently in the wonderful, wonderful 2004 movie “Sideways

28. Roman wrap : TOGA
In Ancient Rome the classical attire known as a toga was usually worn over a tunic. The tunic was made of linen, and the toga itself was a piece of cloth about twenty feet long made of wool. The toga could only be worn by men (the female equivalent was called a “stola”) and only if they were Roman citizens.

36. Jai ___ : ALAI
Even though jai alai is often said to be the fastest sport in the world (because of the speed of the ball), in fact golf balls often get going at a greater clip.

38. ___ and kin : KITH
The word “kith” describes friends and acquaintances, and is used used in the phrase “kith and kin” meaning “friends and family”. “Kith” comes from an Old English word meaning “native country, home”, as the expression “kith and kin” was used originally to mean “country and kinsmen”.

45. Kitschy gift with green “fur” : CHIA PET
Chia is a flowering plant in the mint family. The Chia Pet is an invention of a San Francisco company. It did well in the eighties selling terracotta figurines to which were applied moistened chia seeds. The seeds sprout and as they grew the seedlings become the “fur” of the Chia Pet.

49. “I found it!” : EUREKA
Eureka translates from Greek as “I have found it”. The word is usually associated with Archimedes as he stepped into his bath. His discovery was that the volume of water that was displaced was equal to that of the object (presumably his foot) that had been submerged. He used this fact to determine the volume of a crown, something he needed to determine if it was made of pure gold, or was a forgery.

50. Japanese fare at a “bar” : SUSHI
Sushi is a Japanese dish that has as its primary ingredient cooked, vinegared rice. The rice is usually topped with something, most often fish, and can be served in seaweed rolls. If you want raw fish by itself, then you have to order “sashimi”.

60. British goodbye : TATA
An Englishman might say “tata” or “cheerio” instead of “goodbye”, well, supposedly so!

61. The “S” in GPS: Abbr. : SYST
GPS stands for Global Positioning System. The US military have been working on the satellite technology used in GPS since the days of the first Russian satellite in space, Sputnik. The modern GPS system that we use today was built by the military who received the massive funding needed because of fears during the Cold War of the use of Intercontinental Ballistic Missiles. We civilians, all round the world, owe a lot to President Ronald Reagan because he directed the military to make GPS available to the public for the common good. He was moved to do so after the Soviet Union shot down KAL flight 007 carrying 269 people, when it accidentally strayed into Soviet airspace.

64. Sleuth creator Stout : REX
Nero Wolfe is a fictional detective and the hero of many stories published by author Rex Stout. There are 33 Nero Wolfe novels for you to read, and 39 short stories. There are also movie adaptations of two of the novels: ” Meet Nero Wolfe” (1936) which features a young Rita Hayworth, and “The League of Frightened Men” (1937). One of Wolfe’s endearing traits is his love of good food and beer, so he is a pretty rotund character.