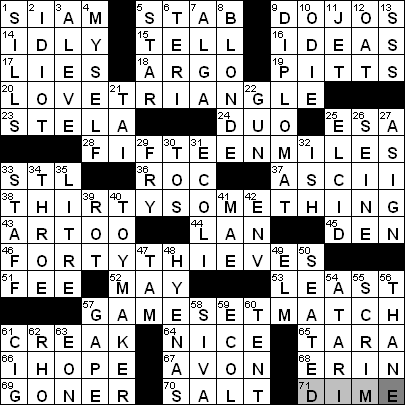 CROSSWORD SETTER: James Tuttle
THEME: GAME, SET and MATCH … the theme answers contain a word that progresses through the score in a game of tennis:

9. Karate schools : DOJOS
The Japanese word dojo literally means “place of the way”. Originally the term applied to training halls that were found in or beside temples. The teaching in a dojo was not limited to the martial arts, however, in the Western world we use the dojo as the name for a training facility for judo, karate and the like.

18. Jason’s ship, in myth : ARGO
In Greek mythology, Jason and the Argonauts sailed on the Argo in search of the Golden Fleece. The vessel was called the “Argo” in honor of the ship’s builder, a man named Argus.

19. English P.M. William and others : PITTS
William Pitt was Prime Minister of Britain from 1766 to 1768. He lent his name to the city of Pittsburgh, Pennsylvania.

23. Inscribed pillar : STELA
Stelae were used all over the world, sometimes as territorial markers, and sometimes to commemorate military victories. In later times stelae were commonly erected as commemorative markers in graveyards or other religious sites.

24. Batman and Robin, e.g. : DUO
The television show “Batman” aired from 1966-1968. Burt Ward played Robin opposite Adam West’s Batman. Supposedly, Burt Ward was offered the part taken by Dustin Hoffman in “The Graduate”, but Ward couldn’t get out of his contract for the “Batman” television series.

28. Distance on the Erie Canal, in song : FIFTEEN MILES
The song “Fifteen Miles on the Erie Canal” was written in 1905. The lyrics are nostalgic, and look back to the days when traffic on the canal was pulled by mules, and bemoans the introduction of the fast-moving engine-powered barges. The first line is “I’ve got an old mule and her name is Sal”.

33. Cardinals’ home: Abbr. : STL
The St. Louis Cardinals were originally called the “Brown Stockings”, changing their name to the “Perfectos” in 1899. That obviously didn’t go down well with the locals, as the owners changed it one year later to the Cardinals.

36. “Arabian Nights” bird : ROC
The mythical roc is a huge bird of prey, reputedly able to carry off and eat elephants.

37. Computer data acronym : ASCII
ASCII (American Standard Code for Information Interchange) lists codes for 32 “control” characters, as well as the 95 printable characters (like a, A, b, B, 1, 2, etc). These binary ASCII codes are the way that our computers can understand what we mean when we type say a letter or a number.

44. PC linkup : LAN
You may have a Local Area Network (LAN) in your house. If you’ve got a PC and a router or switch, likely attached to some modem, then you have a LAN.

46. “Arabian Nights” band : FORTY THIEVES
There is some controversy about the story “Ali Baba and the Forty Thieves” in that it has been suggested it was not part of the original collection of Arabic tales called “One Thousand and One Nights”. The suggestion is that it was added by one of its European translators.

52. Kentucky Derby month : MAY
The first Kentucky Derby was run in 1875, a race modelled on the Epsom Derby in England and the Grand Prix de Paris (now called the “Prix de l‘Arc de Triomphe”). As such, it was run over 1½ miles. The American race was shortened in 1896, and is now run over 1¼ miles.

65. “Gone With the Wind” plantation : TARA
Rhett Butler hung out with Scarlett O’Hara at the Tara plantation in Margaret Mitchell’s “Gone with the Wind”. In the book, Tara was founded by Scarlett’s father, Irish immigrant Gerald O’Hara. He named his new home after the Hill of Tara back in his home country, the ancient seat of the High King of Ireland.

68. Leprechaun’s land : ERIN
Erin is an anglicized version of “Eirinn”, the Irish word for Ireland, with “Eirinn” being the dative case of “Eire”.

6. Actress Hatcher : TERI
Teri Hatcher’s most famous role these days is as Susan Meyer in “Desperate Housewives”. I’ve never seen more than a few minutes of that show, but I do know Teri Hatcher as a Bond girl, as she appeared in “Tomorrow Never Dies”.

8. Marilyn Monroe, e.g., hairwise : BLONDE
Marilyn Monroe was born in 1926 in LA County Hospital, the child of Gladys Pearl Baker. The young girl was given the name of Norma Jeane Mortensen on her birth certificate, but her mother changed this to Norma Jeane Baker almost immediately. She and her estranged husband, Martin Edward Mortenson, had separated before Baker became pregnant so it is suggested that the Mortensen name was used to just to give Norma Jeane “legitimacy”. Norma Jeane married a Jim Dougherty when she 16 years old, and took his name to become Norma Jeane Dougherty in 1932. During WWII she was discovered by a photographer and became quite a successful model. The modelling earned her a screen test, at which time it was suggested that Norma Jean change her name yet again. The first name chosen for her by studio executives was Carole Lind (after Carole Lombard and Jenny Lind), but then Norma Jeane chose “Jeane Monroe” for herself, using her mother’s maiden name. It didn’t take long before the studio intervened again, suggesting that they had too many “Jeans” already. The name Marilyn Monroe was floated as it had a nice ring to it. Along with the new name Marilyn changed from a brunette to a blonde, and a star was born …

10. “Garfield” dog : ODIE
Odie is Garfield’s best friend, and is a slobbery beagle.

25. Conqueror of Valencia in 1094 : EL CID
Rodrigo Diaz de Vivar was known as El Cid Campeador, which translates as “The Champion” or perhaps “The Lord, Master of Military Arts”. El Cid was a soldier who fought under the rule of King Alfonso VI of Spain (among others). However, he was sent into exile by the King in 1080, after acting beyond his authorization in battle. El Cid then offered his services to his former foes, the Moorish kings, After a number of years building a reputation with the Moors, he was recalled from exile by Alfonso. By this time El Cid was very much his own man. Nominally under the orders of Alfonso, he led a combined army of Spanish and Moorish troops and took the city of Valencia on the Mediterranean coast, making it is headquarters and home. He died there, quite peacefully in 1099.

31. Rod-shaped bacteria : E COLI
Escherichia coli (E. coli) are usually harmless bacteria, found in the human gut, working away quite happily. However, there are some strains that can produce lethal toxins. These strains can make their way into the food chain from animal fecal matter that comes into contact with food designated for human consumption.

47. Scottish cap : TAM
A tam o’shanter is a man’s cap traditionally worn by Scotsmen. They were originally all blue (and called “blue bonnets”) but as dyes became more available, they became more colorful. The name tam o’shanter comes from the title character of Robert Burns poem “Tam O’Shanter”.

54. Classic name in arcades : ATARI
At one point Atari was the fastest growing company in US history, but the company never really recovered from the video game crash of 1983.

55. Theater backdrop : SCRIM
“Scrim” is the name given to that transparent fabric that hangs down onto a stage, often used with special lighting for various effects.

56. Feudal baron : THANE
Thanes were Scottish aristocrats. The most famous thane has to be the Thane of Fife, Macduff, the fictional character that is killed by Macbeth in Shakespeare’s play. Other thanes in “Macbeth” are Ross, Lennox and Angus, as well as Menteith and Caithness.

58. One of the Hindu trinity : SIVA
The Hindu Trinity is composed of Brahma the creator, Vishnu the maintainer or preserver, and Shiva (also Siva) the destroyer or transformer. Shiva is a Sanskrit word meaning “auspicious, kind, gracious”.

62. Letter before sigma : RHO
Rho is the Greek letter that looks just like our Roman letter “p”.