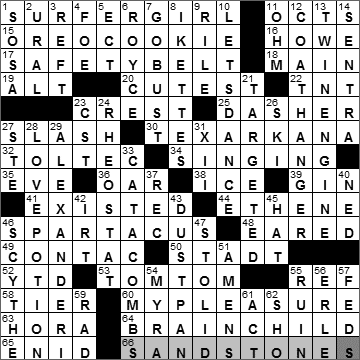 1. One “standing by the ocean’s roar,” in a 1963 song : SURFER GIRL
“Surfer Girl” was the first song ever written by Brian Wilson of the Beach Boys, composed when he was just 19 years old. It was recorded way back in 1962 in one of the band’s first ever recording sessions. But like many of the early Beach Boy recordings, it wasn’t released until the band gained some traction with the public. It finally made it as a single in 1963, released with “Little Deuce Coupe” on the B-side.

15. Newton alternative : OREO COOKIE
The Oreo cookie was the biggest seller in the 20th century, and almost 500 billion have been produced since they were introduced in 1912 by Nabisco. In those early days, the creme filling was made with pork fat, but today vegetable oils are used instead. If you take a bite out of an Oreo sold outside of America you might notice a difference from the homegrown cookie, as coconut oil is added to give a different taste.

16. “The Battle Hymn of the Republic” lyricist : HOWE
In 1856 William Steffe wrote the tune that was eventually used for “The Battle Hymn of the Republic”. Before long it was one of the most popular tunes of the day, sung with a number of different lyrics. After the outbreak of the Civil War, Thomas Bishop composed lyrics to a famous abolitionist version of the tune, “John Brown’s Body”. The word’s to “John Brown’s Body” became less remembered than the strident melody, so Julia Ward Howe wrote the famous patriotic lyrics that spread thought the ranks of the Union forces.

22. Letters of discharge? : TNT
TNT is an abbreviation for trinitrotoluene. The explosive chemical was first produced by the German chemist Joseph Wilbrand in 1863, who used it as a yellow dye. TNT is relatively difficult to detonate, so it was on the market as a dye for some years before its more explosive properties were discovered.

30. Ross Perot’s birthplace : TEXARKANA
Texarkana is the name given to the twin cities of Texarkana, Texas and Texarkana, Arkansas that sit either side of the state line between Texas and Arkansas. The name of “Texarkana” was given when the settlement was founded at the junction of two railroads in 1873. Back then, it was believed that the new city would be not only on the borders of Texas (TEX) and Arkansas (ARK) but also on the border of Louisiana (ANA). The Louisiana state line was eventually set about 30 miles away, but the -ANA suffix was retained.

32. Ancient resident of Mexico’s Cholula : TOLTEC
The Aztec’s viewed the Toltec people as their cultural ancestors. In the “Aztec” language, the term “Toltec” came to mean “artisan”.

39. It’s often in a sling : GIN
A sling is a cocktail made of brandy, whiskey or gin, sweetened and flavored with lemon. The most famous version of the sling is the Singapore Sling, invented by a bartender at the wonderful Raffles Hotel in Singapore.

44. Fruit-ripening gas : ETHENE
Ethylene (also called ethene) has a gazillion uses, including as an anesthetic and an aid to hastening the ripening of fruit. It’s most common use though is as a major raw material in the manufacture of plastics (like polyethylene).

46. Crassus defeated him : SPARTACUS
Spartacus was the leader of the Third Servile War, a rebellion of slaves in Ancient Rome. After two years of fighting, Spartacus and his forces were eventually defeated by a Roman army led by Crassus. Crassus captured six thousand slaves in the final battle, and to send a message to anyone intent on defying Rome in the future, he had all six thousand captives crucified. He ordered the bodies left hanging to rot on the crosses, lined up along the famous Appian Way, the main road to Rome.

48. Like jugs : EARED
I think the reference here is to the expression “jug-eared”, applied (unkindly) to someone with ears that stick out like the handle of a jug.

49. TheraFlu alternative : CONTAC
Contac is a GlaxoSmithKline product with the active ingredient pseudoephedrine. Pseudoephedrine is a drug with decongestant properties, although it is also a stimulant. Personally, I’d go with the hot tea and lemon.

Nürnberg (anglicized as Nuremberg) is a Bavarian city located north of Munich. Historically it is remembered for the huge Nazi Nuremberg rallies, and the Nuremberg trials that took place at the end of WWII. Nürnberg is sometimes confused with the city of Nürburg in the west of Germany, famous for the Nürburgring race track.

53. Monotonous beating sound : TOM-TOM
The tom-tom is a drum played with the hands, which gave its name to a dull, repeating beat or sound.

66. Quartzite and such : SANDSTONES
Sandstone is a sedimentary rock. When sandstone is subject to heat and pressure it can turn into the metamorphic rock, quartzite.

1. 1997-99 N.L. strikeout leader : SOSA
Sammy Sosa was firmly in the public eye in 1998 when he and Mark McGwire were chasing the home run record held by Roger Maris. McGwire fell out of public favor due to stories of steroid abuse (which he later admitted) while Sosa fell of out favor when he was found to be using a corked bat in a 2003 game.

3. Robbed, old-style : REFT
“Reft” is the past participle of the verb “to reave” meaning to rob something.

4. Scarecrow, to Batman : FOE
The Scarecrow is a character in DC Comics, a member of Batman’s rogues gallery. The Scarecrow turns up as a foe for Batman in the movies “Batman Begins” and “The Dark Knight”, and is played by Irish actor Cillian Murphy.

6. Early car company co-founder : ROYCE
Henry Royce founded the Rolls-Royce company in 1904 with his partner, Charles Rolls. Royce died at 70 years of age in 1933. His last words were, reportedly, “I wish I had spent more time in the office” …

11. Omega, to a physicist : OHM
The unit of electrical resistance is the ohm (with the symbol omega), named after Georg Simon Ohm, the German physicist. Ohm was the guy who established experimentally that the amount of current flowing through a circuit was directly proportional to the voltage applied, (V=IR) a relationship that every school kid knows as Ohm’s Law.

14. Civic rival : SENTRA
The Nissan Sentra isn’t a bad alternative to the Honda Civic, I’d say (although I love my Honda Civic Hybrid).

24. Slot car controller : RHEOSTAT
Slot cars are those motorized toy cars that run around on tracks picking up power from the slot in the racing surface. The first slot cars were made by the Lionel company, the manufacturer of toy trains sets. They first appeared in 1912.

A rheostat is an electrical device that can offer a varying degree of resistance to current flow. The English physicist Sir Charles Wheatstone first coined the term, using the Greek “rheos” meaning “flowing stream” and “stat” meaning “regulating device”.

27. Abbr. in many Québec addresses : STE
Ste. is the abbreviation for “sainte”, the feminine form of the French word for “saint”.

29. Grandson of Catherine the Great : ALEXANDER I
Alexander I was also known as Alexander the Blessed, and was Emperor of Russia from 1801 to 1825. Towards the end of his reign, Alexander became more and more concerned for his safety, especially after a kidnap attempt. When he died unexpectedly away from the palace, there started persistent rumors that he had faked his own death and had retired into solitude. Sounds like a plan to me …

33. Maze full of dead ends? : CATACOMBS
There is a basilica in Rome called San Sebastiano fuori le mura (Saint Sebastian outside the walls), which is also known as San Sebastiano ad Catacumbas (Saint Sebastian at the Catacombs). It’s not known whether catacombs in general derive their name from this location, or whether the church took the name from an earlier term “catacombs”. However, it is known that these Roman underground passageways were the first subterranean cemeteries to be referred to as “catacombs”.

42. Old N.Y.C. elevated operator : IRT
The Interborough Rapid Transit Company was the original, private operator of the New York Subway when it opened in 1904. The city took over ownership of the system in 1940, but the lines originally operated by the IRT are still known by the IRT moniker.

51. Periods of prayer? : AMENS
“Amen”, meaning “so be it” came into English from Latin, although the word is of Hebrew origin.

54. Pioneering woman lawyer Bradwell : MYRA
Myra Bradwell started her law training soon after her husband was called to the bar, and apprenticed with a lawyer in her husband’s law office. In 1892 she became the first female lawyer in the state of Illinois.

56. Contemporary of Ngaio : ERLE
Dame Ngaio Marsh was a New Zealand crime writer. She is known as one of the four original “Queens of Crime”, namely: Dorothy L. Sayers, Margery Allingham, Agatha Christie, and Marsh. All her novels feature her hero, a British CID detective, Roderick Alleyn.

I must have read all of the Perry Mason books when I was in college. I think they kept me sane when I was facing the pressure of finals. Creator Erle Stanley Gardner was himself a lawyer, although he didn’t get into the profession the easy way. He went to law school, but got himself suspended after a month. So, he became a self-taught attorney and opened his own law office in Merced, California. Understandably, he gave up the law once his novels became successful.

62. “The Big C” airer, briefly : SHO
“The Big C” is a Showtime series about a suburban woman who is dealing with cancer. Stars of the show are the wonderful Laura Linney and Oliver Platt.