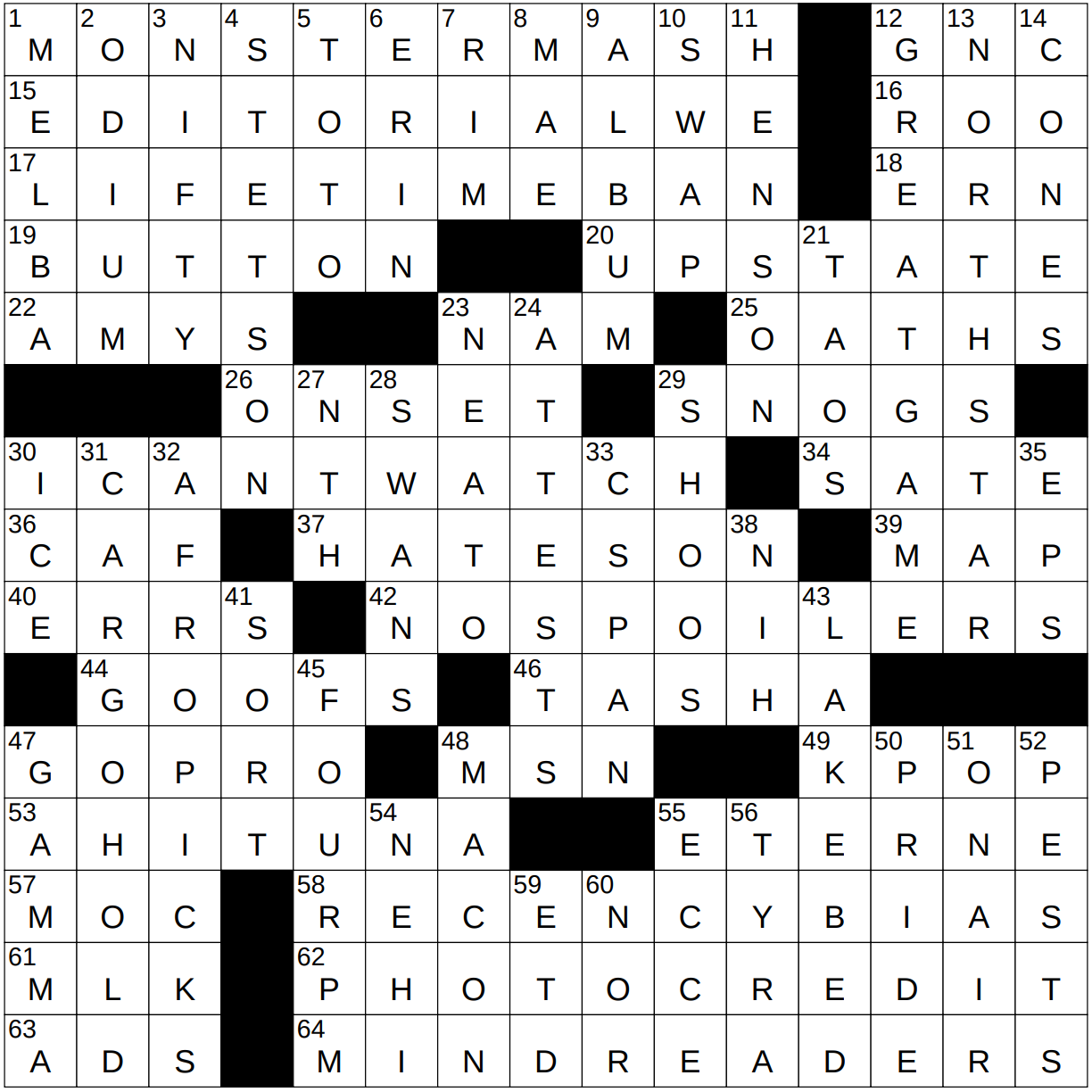 The “royal we” is more correctly called the “majestic plural”, and is the use of a plural pronoun to describe a single person in a high office. I suppose the most often quoted phrase that uses the majestic plural is “We are not amused”, which is often attributed to Queen Victoria. The “editorial we” is a similar concept, in which a newspaper editor or columnist refers to himself or herself as “we” when giving an opinion.

16 Friend of Lumpy the Heffalump : ROO

19 Frosty the Snowman’s nose, for one : BUTTON

“Frosty the Snowman” is a song that was first recorded by Gene Autry, in 1950. The song was specifically written in the hope that it would become a follow-up hit to Autry’s “Rudolph the Red-Nosed Reindeer” that topped the charts the previous year.

Chicago, Illinois is the US’s third most populous city, after New York and Los Angeles. It is also home to O’Hare airport, the busiest airport in the whole world (in terms of takeoffs and landings). Chicago takes its name from the Chicago River, which in turn takes its name from the Native American word “shikaakwa” that translates as “wild onion” or “wild garlic”. Early French explorers chose this name as they found dense growths of wild garlic along the banks of the river.

Amy’s Kitchen is a company making organic and easy-to-prepare frozen food, all of which is vegetarian. The company was founded in 1987 by Andy and Rachel Berliner, and Amy is their daughter.

25 They may be mild or minced : OATHS

The verb “to mince” can mean “to make light of”, and more specifically “to criticize using polite language”. William Shakespeare used the term in such a sense in a couple of his plays, although the derivative expression “mince words” was first used in print in Benjamin Disraeli’s first novel “Vivian Grey”, published in 1826:

Your Lordship’s heart is very warm in the cause of a party, which, for I will not mince my words, has betrayed you.

So, to mince words is to moderate one’s language while still giving criticism. The related phrase “minced oath” describes a euphemistic phrase used to replace a more profane phrase, e.g. “gosh” for “God”, “heck” for “hell”.

29 Makes out in England : SNOGS

36 Shorthand at a coffee shop : CAF

GoPro is a company that makes high-definition video cameras that have a rugged design. Famously, GoPro cameras are used in extreme conditions. For example, they are often mounted on moving vehicles or used by people playing sports. Two astronauts on the International Space Station inserted a GoPro camera inside a floating ball of water, and then showed the view from inside the ball of water. Amazing footage …

62 What a camera emoji in an Instagram caption often signifies : PHOTO CREDIT

Odium is a strong dislike or aversion. The term “odium” is Latin in origin and relates to the Latin word “odi” meaning “I hate”.

7 Something salted at a Mexican restaurant : RIM

Jim Henson was a puppeteer, and most famously the creator of the Muppets characters. Henson produced his first puppets for a local television station in Hyattsville, Maryland while he was still in high school. As well as the famous Muppet characters, Henson created, operated and voiced the character Yoda in most of the “Star Wars” movies. Henson died from a streptococcal infection in 1990, on the same day that Sammy Davis, Jr. passed away.

New Mexico’s Taos County was formed in 1852 as one of the nine original counties in the New Mexico Territory.

33 First network to broadcast a live session of the House of Representatives : C-SPAN

C-SPAN is a privately-funded, nonprofit cable channel that broadcasts continuous coverage of government proceedings. C-SPAN Video Library is an amazing online archive provided by C-SPAN that offers a complete audio and video archive of Congressional proceedings going back to 1987. Users can search the archive for free, by topic, speaker date and more. When the site was launched in 2010, the archive already contained 160,000 hours of programming. There is a section of the archive called “Congressional Chronicle” that is particularly easy to navigate.

I personally think that Happy Hour is best enjoyed shaken, not stirred; and with a good crossword …

The Tubman Museum in Macon, Georgia was founded in 1981 to showcase African-American art, history and culture. The facility is named for the celebrated abolitionist and activist Harriet Tubman.

54 Soft drink brand that sounds like a type of sock : NEHI

To smize is to smile with the eyes. The term “smize” was coined by host Tyra Banks in 2009 on the reality show “America’s Next Top Model”.

1 1962 #1 hit that the BBC once deemed “too morbid” to play : MONSTER MASH
12 Supplements supplier : GNC
15 First person plural? : EDITORIAL WE
16 Friend of Lumpy the Heffalump : ROO
17 Highest bar? : LIFETIME BAN
18 Directional suffix : -ERN
19 Frosty the Snowman’s nose, for one : BUTTON
20 Like Chicago, geographically : UPSTATE
22 Meatless food brand : AMY’S
23 Where some vets were based : ‘NAM
25 They may be mild or minced : OATHS
26 First indication : ONSET
29 Makes out in England : SNOGS
30 Comment made with eyes closed, perhaps : I CAN’T WATCH
34 Quench : SATE
36 Shorthand at a coffee shop : CAF
37 Talks smack about : HATES ON
39 What may come as a relief? : MAP
40 Does something accidentally, perhaps : ERRS
42 “Don’t tell me what happens yet!” : NO SPOILERS
44 Silly ones : GOOFS
46 Actress Smith of “Why Did I Get Married?” : TASHA
47 Daredevil’s helmet attachment, maybe : GOPRO
48 Windows portal : MSN
49 Genre for Blackpink or Red Velvet : K-POP
53 Steak option for a pescatarian : AHI TUNA
55 Lasting forever, once : ETERNE
57 Comfy bit of footwear : MOC
58 Inclination to prioritize new events over historical ones : RECENCY BIAS
61 Monogram of 1964’s Nobel Peace laureate : MLK
62 What a camera emoji in an Instagram caption often signifies : PHOTO CREDIT
63 Things people pay not to see : ADS
64 They know what you’re thinking : MIND READERS