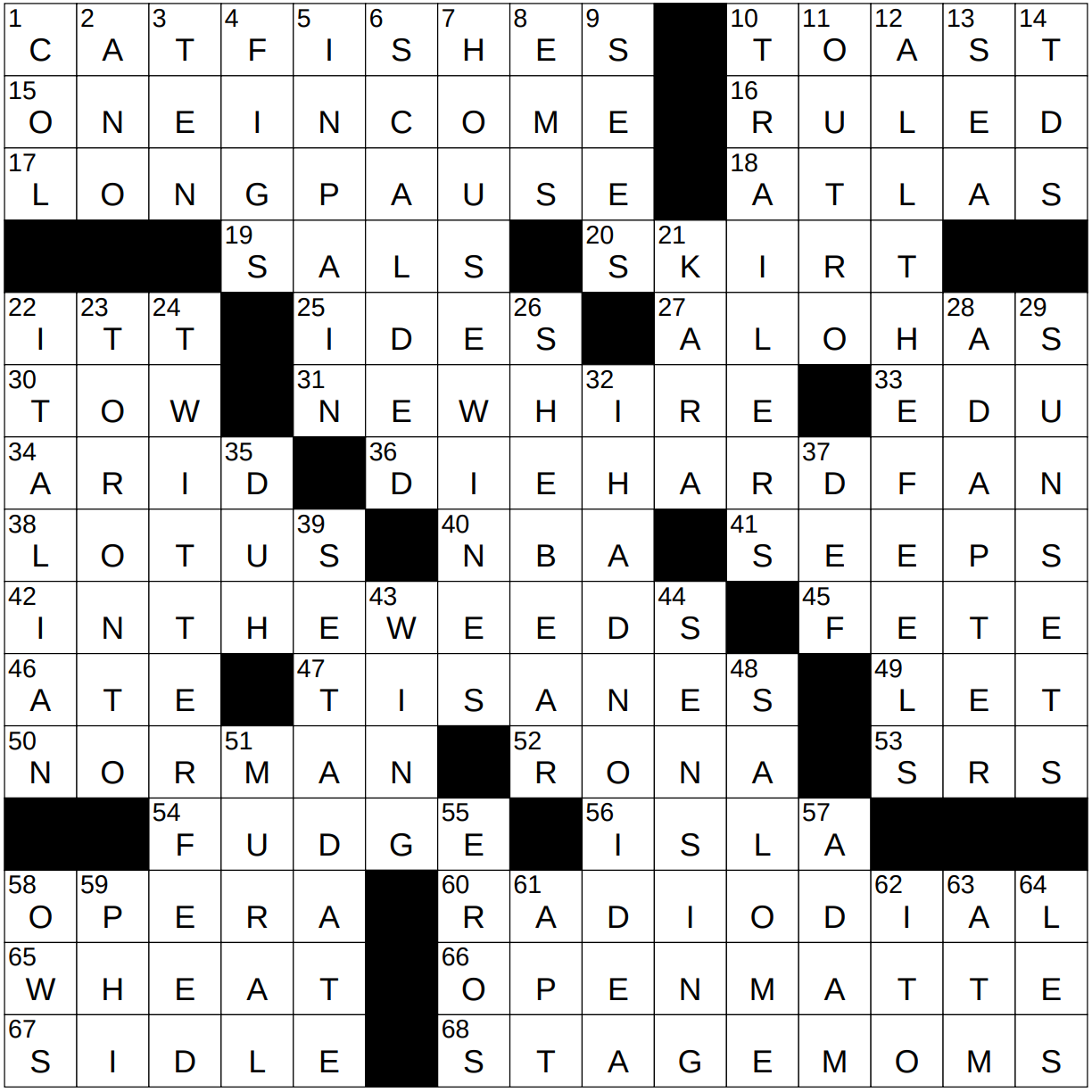 10 Occasion for a high flute? : TOAST

Back in the 14th century, a skirt was the lower part of a woman’s dress, its lower border. This evolved over time into the usage that we know today. The verb “to skirt”, meaning “to pass along the edge”, comes from the former meaning of the noun.

International Telephone & Telegraph (ITT) was formed in 1920 from the Puerto Rico Telephone Company. ITT divested its telecommunications business in 1986, today the company is known for its products in the field of water and fluids management, as well motion and flow control. Many of ITT’s products are sold into the aerospace market.

33 Follower of many state names : EDU

“Tisane” is another word for herbal tea. “Tisane” comes into English via French from the Greek “ptisane”, the word for crushed barley.

The classic Alfred Hitchcock suspense film “Psycho” released in 1960 is based on a 1959 novel of the same name by Robert Bloch. The Bloch novel in turn is loosely based on actual crimes committed by murderer and grave robber Ed Gein. When “Psycho” was making its initial run in theaters, latecomers were not granted admission, abiding by a policy instigated by Hitchcock himself. He felt that anyone missing the opening scenes would not enjoy the film.

Rona Barrett is a gossip columnist originally from New York City but who plies her trade in Southern California. Barrett started out with a gossip column that was syndicated in newspapers but then made a successful transition to television. She made regular appearances in news broadcasts and on her entertainment shows in the sixties and seventies.

58 Kind of cake with layers of coffee and chocolate : OPERA

Opera cake is a confection from French cuisine. A traditional recipe calls for layers of almond sponge cake soaked in coffee syrup, interleaved with ganache and a coffee-flavored buttercream, with the whole thing covered in a chocolate glaze. Wow!

65 Resource in the game Catan : WHEAT

The Settlers of Catan (now just “Catan”) is a board game that was introduced in 1995, in Germany as “Die Siedler von Catan”. The game is very popular in the US and was called “the board game of our time” by the “Washington Post”. My son plays it a lot, and as a lover of board games, I am going to have to check it out …

In the days before widescreen televisions, many movie producers opted to record their films in the 4:3 aspect ratio that suited TV screens. The aspect ratio has to be changed for projection in the widescreen format in a movie theater, and this is achieved using the open matte technique. Quite simply, the top and bottom of the picture is matted out in the projector, and I guess one hopes there’s nothing important going on in those parts of the image!

The fig is the fruit of a small tree in the mulberry family. Once picked, figs don’t travel very well, so the bulk of figs consumed have been preserved by drying.

6 Like the milk in café au lait, sometimes : SCALDED

8 Myanmar has two of them : EMS

There are two letters M (ems) in the word “Myanmar”.

“Layla” is one of the great rock anthems of the seventies, released by Derek and the Dominos as a single in 1971. It is a masterpiece of composition, with the first half of the song a great vehicle for the guitar-playing talents of Eric Clapton. The second half is a beautifully melodic piano coda (a coda … taking up half the length of the track!). To top things off we have the “unplugged” version recorded by Clapton in 1992, a fabulous and inventive variation on the original.

In football, touchdowns (TDs) might be scored by running backs (RBs) and wide receivers (WRs).

Kara Swisher is a much-respected technology and business journalist known for covering topics related to Silicon Valley. Swisher was married for about a decade to former Chief Technology Officer of the United States Megan Smith.

Don’t try asking for Italian dressing in Italy, as it’s a North American invention. Italians are fond of dressing their salads with olive oil, vinegar, salt and maybe some black pepper. Try it!

23 Home of the largest street fair in North America : TORONTO

The North American brown bear is usually referred to as the grizzly bear. The name “grizzly” was given to the bear by Lewis and Clark. The term “grizzly” might mean “with grey-tipped hair”, or “fear-inspiring”. Both definitions seem to be apt …

“Salomé” is an 1891 play by Irishman Oscar Wilde that the playwright originally wrote in French. It tells the biblical story of Salome who requested the head of John the Baptist in return for performing the dance of the seven veils. Wilde’s work was adapted by Richard Strauss into an opera of the same name that premiered in Dresden in 1905.

When Oscar Wilde was at the height of his success, he had the Marquess of Queensberry prosecuted for libel. Wilde claimed that Queensberry had left a note at his club with a note that accused the former of sodomy. Queensberry was exonerated during the trial, and Wilde dropped the charges. But the damage was done. Evidence revealed during the trial led to Wilde’s immediate rearrest. He was convicted and served two years in jail.

51 Many a work by the artist Banksy : MURAL

Upsilon is the 20th letter in the Greek alphabet, and the character that gives rise to the letter Y that we use in English.

64 Article in a French newspaper : LES