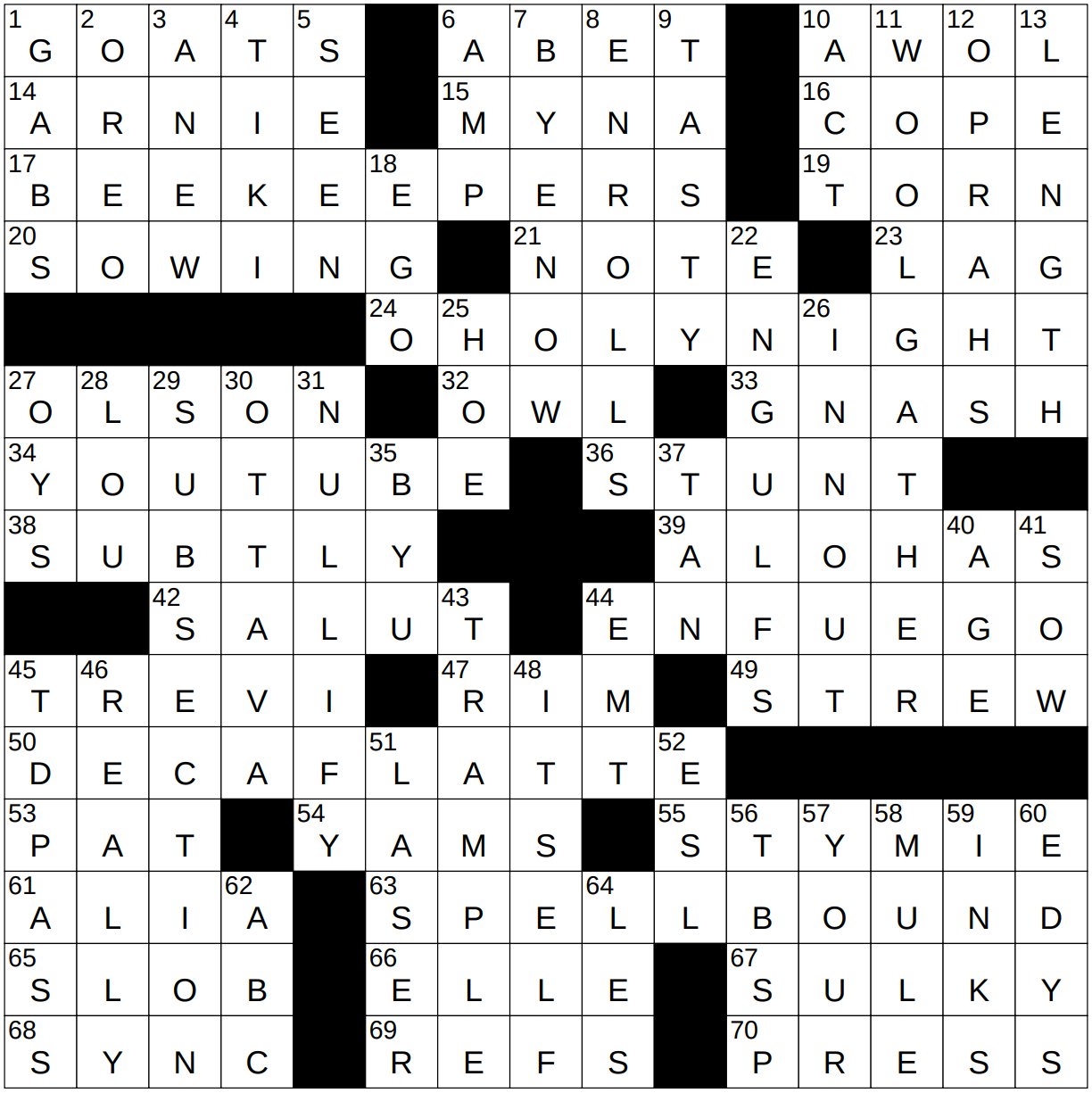 Constructed by: Richard D. Allen
Edited by: Will Shortz

The starts of themed answers, when read from top to bottom, phonetically SPELL out the word “B-O-U-N-D”:

1 Kids and their parents : GOATS

10 Wanted, but nowhere to be found : AWOL

14 Nickname for Schwarzenegger or Palmer : ARNIE

Body-builder, actor and politician Arnold Schwarzenegger was born in Graz in Austria, the son of the local police chief. Schwarzenegger’s family name translates into the more prosaic “black plowman”. In his bodybuilding days, he was often referred to as the Austrian Oak. When he was Governor of California he was called “the Governator”, a play on his role in the “The Terminator” series of movies.

24 Words before “the stars are brightly shining,” in a carol : O HOLY NIGHT

“Hoot owl” is an informal name for the barred owl. Barred owls have dark stripes running up and down the underside of their bodies, hence the name “barred”. They also have a very distinctive two-phrase vocalization, hence the name “hoot”.

In French, “salut” means “hi”, and is less formal than “bonjour”. The former term can also be used as a friendly toast.

“Skoal” (sometimes “skol”) is a Scandinavian toast that has roots in the old Norse word “skaal” meaning “cup”.

A sports player who is doing really well might be said to be “on fire”. Sometimes “on fire” is translated into Spanish, and the person is said to be “en fuego”.

“Three Coins in the Fountain” is a 1954 film about three young American women in Rome looking for romance. In the story, each of the girls throws a coin into the city’s famous Trevi fountain making a wish. The title song, performed by an uncredited Frank Sinatra, is probably the most famous composition by Jule Styne and Sammy Cahn.

50 Drink that comes with a buzz cut? : DECAF LATTE

The word “stymie” comes from golf, and is a situation in which one’s approach to the hole is blocked by an opponent’s ball. We use the term more broadly as a verb to describe standing in the way of something.

The suffix “-nik” is of Slavic origin. It is somewhat like the suffix “-er” in English. By adding “-nik” to a noun, the new word describes a person related to what that noun describes. Examples of the use of “-nik” in mainstream English are “beatnik” and “”refusenik”. Examples of more casual “-nik” terms are “neatnik” and “peacenik”.

A tiki is a large carving of wood or stone resembling a human form that is found in Polynesian cultures. The carvings often mark out boundaries surrounding sites that are sacred to the locals.

In-N-Out Burger is a fast food chain that’s very popular out here on the left coast. Unusually for a fast food business, In-N-Out Burger has no franchises and is privately owned. The company also prides itself on paying all employees above minimum wage. Also, if you check the packaging of the food and drink items, you’ll find a bible verse discreetly printed on the bottom of cups and wrappers, reflecting the Christian beliefs held by the company ownership. In-N-Out Burger was founded in 1948 by Harry and Esther Snyder, and is now owned by Lynsi Snyder, the couple’s only grandchild.

Brigham Young University (BYU) in Provo, Utah has about 34.000 students on campus making it the largest religious university in the country. The school was founded in 1875 by Brigham Young, then President of the Church of Latter-day Saints.

The first use of a national emergency phone number was in 1937 in the UK, where the number 999 was introduced to call emergency services. If you need emergency services in the UK or Ireland to this day, you have to dial 999. It’s not really clear why 911 became the emergency number in the US. The most credible suggestion (to me) is that when it was introduced by the FCC in 1967, it was a number that “fit” with the numbers already used by AT&T for free services (211-long distance; 411-information; 611-repair service).

51 Means of tagging in a game : LASER

The name “Laser Tag” is really a misnomer as lasers are rarely used in the game. The “guns” actually send out infrared light, and not laser light, that is picked up by infrared detectors worn by the players.