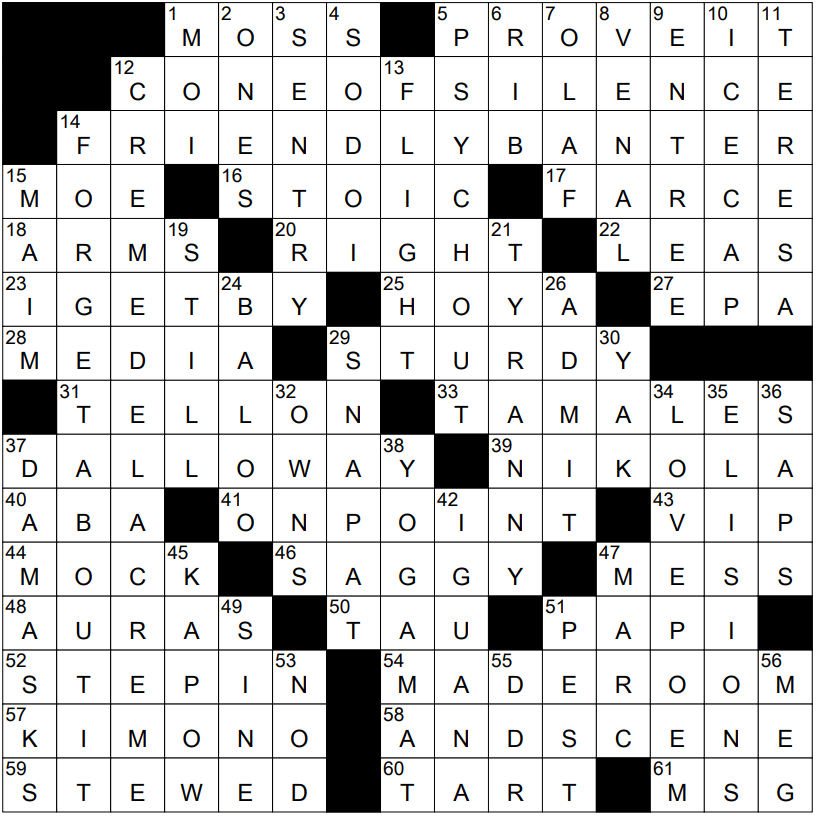 1 Much of Iceland’s greenery : MOSS

Iceland is the most sparsely populated country in the whole of Europe, with two-thirds of the nation’s population residing in and around the capital city of Reykjavik. Iceland was settled by the Norse people in AD 874, and was ruled for centuries by Norway and then Denmark. Iceland became independent in 1918, and has been a republic since 1944. Iceland is not a member of the EU but is a member of NATO, having joined in 1949 despite not having a standing army.

12 Fictional device in which to convey secret information : CONE OF SILENCE

The “Cone of Silence” is an ineffective security device that featured on the espionage sitcom “Get Smart” in the sixties.

15 “Calvin and Hobbes” character described as “a six-year-old who shaves” : MOE

The athletic teams of Georgetown University are known as the Hoyas. The name is derived from “Hoya Saxa”, a traditional cheer yelled out at Georgetown games as far back as 1893. The term is a mixture of Greek and Latin, with the Greek word “hoya” meaning “such” or “what”, and “saxa” translating from Latin as “rocks” or “small stones”. The cheer is usually rendered in English as “what rocks!”.

A tamale is a traditional dish from Central America composed of a starchy dough that is steamed or boiled in a wrapper made from a corn husk or banana leaf. The dough is called masa, and can include many different ingredients including meat, cheese, fruit and vegetables. A hot tamale is a kind of tamale that originated in the Mississippi Delta. It is particularly spicy, and the masa is replaced with corn meal.

“Mrs. Dalloway” is a novel by Virginia Woolf that was first published in 1925. The story tells of a day in the life of Clarissa Dalloway, a day in which she is preparing for a party that she is hosting. The novel has been compared to “Ulysses” by James Joyce, a story about a day in the life of Leopold Bloom.

A dewlap is a flap of skin that hangs below the neck of some creatures. Dewlaps are found on anything from dogs to iguanas.

“Papi” is Spanish for “Daddy”.

57 Robe for a sumo wrestler : KIMONO

61 Additive once extracted from kelp : MSG

Someone described as “venal” is open to bribery. The term ultimately derives from the Latin word “venus” meaning “for sale”.

“Elision” is a linguistic term describing the omission of a sound or sounds in a word or phrase. Examples of elisions are found in “bo’s’n”, “Will-o’-the-wisp” and “‘Enry” (Eliza Dolittle’s “Henry”).

38 Something to meditate on? : YOGA MAT

42 Animal that climbs cactuses to eat their flowers : IGUANA

The stage musical “Hairspray” is based on the original 1988 film by John Waters. The stage musical was in turn adapted for the big screen, in a film of the same name released in 2007 and starring John Travolta.

Meg Ryan is the stage name of the actress Margaret Mary Hyra. Ryan’s big break came with the excellent 1989 movie “When Harry Met Sally …”, from which she went on to star in some of the most popular romantic comedies ever made.