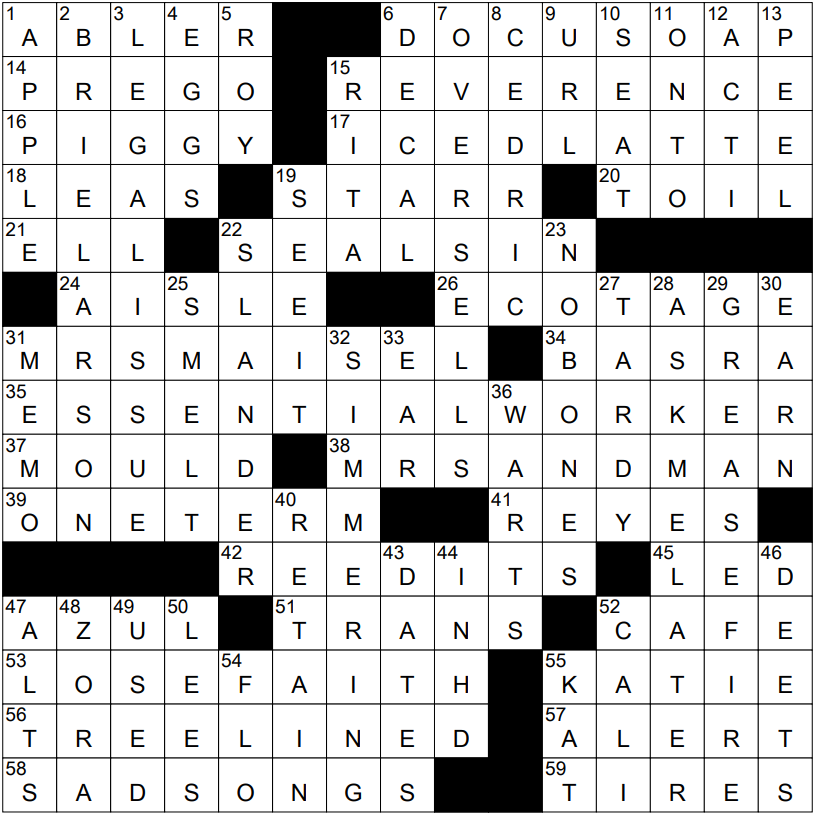 6 Genre for “Jersey Shore” and “The Real World” : DOCUSOAP

The Prego brand of pasta sauce is owned by the Campbell Soup Company. It is actually based on the family recipe of one of the company’s chefs. “Prego” literally means “I pray” in Italian, but it translates best in English as “you’re welcome” when it is used after a “thank you” (“grazie”, in Italian).

The word “letter” opens with a letter L (ell).

“The Marvelous Mrs. Maisel” is a comedy drama TV show set in the late fifties and early sixties. The title character, played by Rachel Brosnahan, is a New York housewife who opts for a career as a standup comedian.

Actress Rachel Brosnahan is best known for playing the title character in the comedy drama “The Marvelous Mrs. Maisel”. Prior to that success, she had a recurring role playing sex worker Rachel Posner in the political thriller “House of Cards”.

When Donald Trump won the nomination as presidential candidate in 2016, he wasn’t the first candidate to become the Republican nominee without any political experience. The most famous such candidate in recent decades was Dwight D. Eisenhower, who was put on the top of the ticket in 1952.

Point Reyes is a picturesque cape on the Northern California coast about 30 miles west-northwest of San Francisco. The cape was named “Punto de los Reyes” (Kings’ Point) by Spanish explorer Sebastián Vizcaíno, when his ship anchored nearby on the Day of the Three Kings (January 6th) in 1603.

51 Like those celebrated with an annual Day of Visibility on March 31 : TRANS

As one might expect, the Waldorf salad was created at the Waldorf Hotel in New York City (now the Waldorf=Astoria), back in the 1890s. The classic version of the Waldorf salad is made from apples, celery and walnuts dressed in mayonnaise and served on a bed of lettuce. Anyone who is a fan of the BBC sitcom “Fawlty Towers” will remember how much trouble Basil Fawlty had coming up with a Waldorf salad for an American guest, as the kitchen was “out of Waldorfs” …

“Guys and Dolls” is a musical with music and lyrics by Frank Loesser. It was first produced on Broadway, in 1950, and ran for 1200 performances. The show was based on a book written by Jo Swerling and Abe Burrows, which in turn was inspired by the short stories “The Idyll of Miss Sarah Brown” and “Blood Pressure” by Damon Runyon. “Guys and Dolls” was chosen as winner of a Pulitzer in 1951, but the award was canceled as Abe Burrows was having problems with the House Un-American Activities Committee at the time.

Actress Rita Wilson is also a producer. She produced the 2002 movie “My Big Fat Greek Wedding”, which was destined to become the highest-grossing independent movie of all time. Wilson married fellow actor Tom Hanks in 1988.

It is said that the phrase “warts and all” was coined by Oliver Cromwell, although there is no real evidence that he ever uttered the phrase. Cromwell had his portrait painted by Sir Peter Lely, an artist who had a reputation for producing works that flattered the subject. Cromwell was a puritan, and may indeed have instructed Lely to produce a less flattering and more objective image. Indeed, the painting includes warts on Cromwell’s face, imperfections that could easily have been omitted.