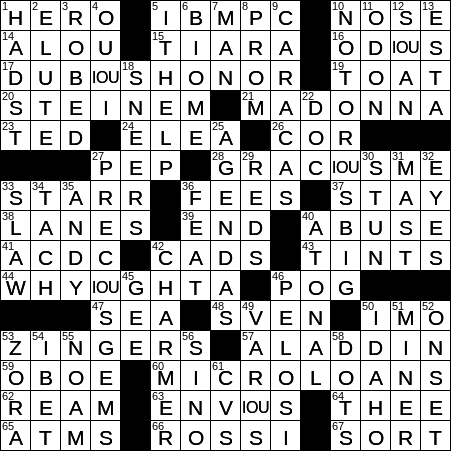 We have a rebus puzzle today, with the letters IOU appearing in several squares:

In the early days of desktop computing, an IBM clone (also “PC clone”) was a computer built by an IBM competitor that was designed to function just like an IBM, but without using any copyrighted material or trade secrets that were the intellectual property of IBM. Clones were always a competitive issue for IBM, and perhaps were part of the reason that IBM doesn’t make desktop computers today …

10. Something to hold near a skunk : NOSE

14. Matty who once had a National League batting title : ALOU

Gloria Steinem is a journalist whose name is very much associated with the feminist movement of the late sixties and early seventies. Steinem co-founded “Ms.” magazine with fellow-feminist Dorothy Pitman Hughes.

“Brenda Starr” is a comic strip created by Dale Messick. The strip is somewhat unique in the world of syndicated comics in that it was created by a woman, and has been drawn by women ever since Messick retired in 1980. The storyline features Brenda Starr who lives through exciting and exotic adventures and romances.

44. Catchphrase for Moe Howard : WHY, I OUGHTA

2. Wash out with a solvent : ELUTE

Elution is a technique that I used to employ many years ago when I worked as a biochemist. Elution is the extraction of one material from a mixture by washing it out with a solvent. Often this is done with the help of solid substance that adsorbs one material in the mixture so that the second, unadsorbed material can easily be dissolved and collected.

In French, an emphatic “oui” (yes) might be said as “certainement!” (certainly!).

5. What the Genius Bar provides : IT HELP

The origin of the term “Holy Toledo!” is much debated. My favorite story is that it comes from the days of Vaudeville. Back then the week before Easter, known as Holy Week, was the worst week at the box office. Old Vaudeville entertainers used to quip that any week in Toledo was Holy Week, that ticket sales were always bad there. They referred to the city as “Holy Toledo”.

8. Party that often has an after-party : PROM

Caracas is the capital of Venezuela, and is located in the north of the country. The original settlement of Caracas was named by the Spanish using the name of a local indigenous tribe.

10. Noted artist on Bad Boy Records, with “the” : NOTORIOUS BIG

The Winnebago people of Nebraska takes their name from the Fox River that flows below what is now called Lake Winnebago in eastern Wisconsin. The muddy water of the river led to the people nearby being named “winepyekoha” in the Potawatomi language, which translates as “person of the dirty water”.

“¿Cómo está usted?” is the more formal way of asking, “How are you?” in Spanish.

25. Well-run meetings have them : AGENDAS

34. Instrument with a needle, for short : TACH

Nancy Pelosi is a former Speaker of the House, and the 60th person to hold that position. Ms. Pelosi represents a district not far from here, which covers most of San Francisco. She was the first Californian, the first Italian-American and the first woman to be Speaker of the House. As Speaker, she was also second in line, after the Vice President, to take over if President Obama could not finish his term. That made Nancy Pelosi the highest-ranking female politician in US history.

Dennis Hastert served as Speaker of the House from 1999 to 2007, making him the longest-serving Republican in history to hold the office. Hastert resigned his seat in 2007 to become a lobbyist. It emerged some years later that Hastert had molested young boys during his teaching career in the 1970s. As a result, he served 13 months in prison. That makes Hastert the highest-ranking US politician to have spent time behind bars.

Shoshone Falls is a major waterfall on the Snake River in southern Idaho. Shoshone Falls is sometimes referred to as the Niagara of the West, and is actually 45 feet taller than Niagara Falls.

There were two Sino-Japanese Wars. The first was fought in 1894-95 over control of Korea. The second was fought between 1931 and 1945, eventually becoming part of WWII.