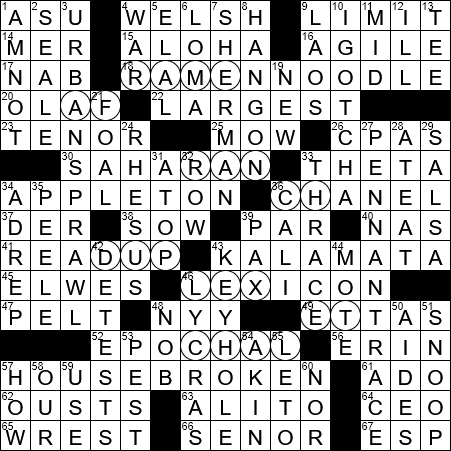 Circled letters in the grid spell out the names of types of HOUSES. Those names have been BROKEN, with part in one row, and part in an adjacent row.

The HOUSE types are:

Llwynywermod is a royal estate in Wales that is owned by the Duchy of Cornwall, and in effect by Prince Charles, the eldest son of Queen Elizabeth II. The estate was originally owned by a relative of Anne Boleyn, the second wife of Henry VIII. Prince Charles purchased the property for the duchy in 2007. As grand as it all sounds, the home on the estate is a refurbished, three-bedroom farmhouse.

Luciano Pavarotti has to have been one of the most celebrated tenors of all time. He was able to appeal to audiences beyond the traditional fans of opera, helped by his performances with the Three Tenors: Pavarotti, Placido Domingo and Jose Carreras. Pavarotti made his final performance on stage at the 2006 Winter Olympics in Turin, Italy, where he sang his famous rendition of the moving aria “Nessun dorma” and brought the house down. Pavarotti passed away from pancreatic cancer the following year, at the age of 71.

A mow is a hayloft.

The name “Sahara” means “greatest desert” in Arabic and it is just that, a great desert covering almost 4 million square miles of Northern Africa. That’s almost the size of the United States.

Rapper Nas used to go by another stage name, “Nasty Nas”, and before that by his real name, “Nasir bin Olu Dara Jones”. Nas released his first album “Illmatic” in 1994, and inventively titled his fifth studio album “Stillmatic”, released in 2001. Not my cup of tea, I would say …

Cary Elwes is an English actor, perhaps most noted for appearing in the 1987 film “The Princess Bride”. He also played the title role in 1993’s “Cary Elwes”. Cary is the son of a celebrated English portrait painter, Dominick Elwes.

The New York Yankees baseball team has the nickname “the Bronx Bombers”. The nickname reflects where the team plays (the Bronx) and the team’s reputation for hitting (bombers). The New York Yankees were the first team to retire a uniform number, doing so on July 4, 1939. That day they retired the number 4 in honor of Lou Gehrig.

Bobby Seale is the civil rights activist who co-founded the Black Panther Party with Huey Newton.

William Tecumseh Sherman spoke the famous phrase “war is hell” when addressing a large rally in Columbus, Ohio in 1880. He said, “There is many a boy here today who looks on war as all glory, but, boys, it is all hell.” President Harry S. Truman took a different view decades later, in 1945, when he said “Sherman was wrong. I’m telling you I find peace is hell.”

Loma Linda is a city in California located not far from Los Angeles. The name Loma Linda translates from Spanish as “Beautiful Hill”.

The last few weeks of the baseball season are known as “a pennant race”. Before 1969, the term was perhaps more apt, as the pennant winner (league champion) would be the team with the best win-loss record at the end of the season. Starting in 1969, when both the National and American Leagues formally split into East and West divisions, the pennant has been awarded to the winner of a best-of-five series of games played by the division winners each October. The pennant winners then go on to the best-of-seven World Series, also played in October.

In terms of population, Cali is the third largest city in Colombia (after Bogotá and Medellin). Santiago de Cali (the full name for the city) lies in western Colombia. Apparently, Cali is a destination for “medical tourists”. The city’s surgeons have a reputation for being expert in cosmetic surgery and so folks head there looking for a “cheap” nose job. Cali has also been historically associated with the illegal drug trade and money laundering.

Bogotá is the capital city of Colombia. Noted for having many libraries and universities, Bogotá is sometimes referred to as “The Athens of South America”.

What we call spandex in the US is known as lycra in the British Isles. “Spandex” was chosen as the name for the elastic fiber as it is an anagram of “expands”.

55. Jared who won an Oscar for “Dallas Buyers Club” : LETO