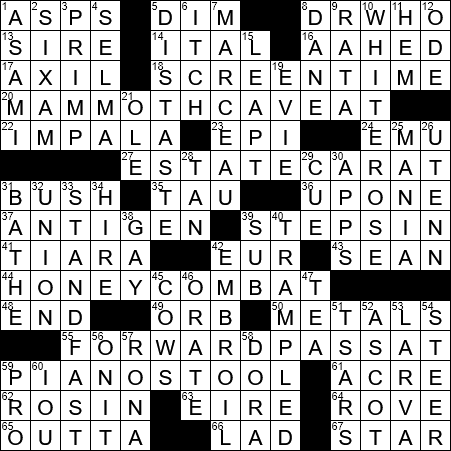 Today’s Theme: At the End

Themed answers are well-known phrases with the letters -AT added to the end:

1. Menaces that name other menaces if you put a “w” at the start : ASPS

The iconic science-fiction television show “Doctor Who” first aired in 1963, and relaunched in 2005 by the BBC. The relaunched series is produced in-house by the BBC in Cardiff in Wales, the location that is the setting of the successful “Doctor Who” spin-off called “Torchwood”. The new show is about the Cardiff branch of the Torchwood Institute which investigates incidents involving extraterrestrials.

17. Angle between a leafstalk and a stem : AXIL

The axil is the upper angle between say a leaf stalk and the stem of a plant.

Mammoth Cave National Park in central Kentucky is home to the longest cave system in the world. The surveyed sections of the cave alone stretch over 400 miles. The cave was named for its size, as there is no connection at all with the extinct wooly mammoth.

The epidermis is the outermost layer of the skin. The thickest piece of epidermal tissue in humans is on the soles of the feet and the palms, measuring about 1.5 mm. The thinnest measures 0.1 mm, and that would be the human eyelid.

A crossword zoo is home to emus, rheas, nenes, ewes, bees, etc. All are words commonly found in puzzles.

27. Small diamond handed down to an heir? : ESTATE CARAT (from “estate car”)

The style of automobile that we call “station wagon” here in North America, is known as “estate car” in the British Isles. Both names are really references to the vehicle’s utility in hauling baggage in the extra space provided in the rear. A station wagon could haul bags to the station, and an estate car could haul bags to one’s country estate!

An antigen is a molecule recognized by the immune system, one that can be chemically bound and neutralized by an antibody. An antigen used to be called an “ANTI-body GEN-erator”.

Sean Lennon is the only child of John Lennon and Yoko Ono. Sean’s godfather is Elton John. Sean is a musician and composer, and has a band called the Ghost of a Saber Tooth Tiger.

An orb and cross (“globus cruciger”) has been used as a Christian symbol of authority since Medieval times. The cross sits atop the globe, indicating Christ’s authority over the world. When the orb is held in the hand of a king or queen, this indicates the authority invested in the earthly ruler.

61. Amount of land a pair of oxen could plow in a day, historically : ACRE

67. Symbol in the middle of a Scrabble board : STAR

John Lewis is a civil rights leader who was a prominent leader in the 1963 March on Washington, in which Martin Luther King Jr. delivered his “I Have a Dream” speech. Lewis suffered a fractured skull as he walked at the head of the march across the Edmund Pettus Bridge in Selma on Bloody Sunday. Lewis was elected to the US House of Representatives in 1987, and was awarded the Presidential Medal of Freedom in 2011 by President Obama.

The University of Tennessee (UT, UTenn) is a public school in Knoxville that was founded in 1794. UT is home to the collections of three sets of presidential papers; those of Presidents Andrew Jackson, James K. Polk and Andrew Johnson, all of whom hailed from Tennessee. UT has three primary campuses, in Knoxville, Chattanooga and Martin.

The verb “to cow” means to intimidate, to scare. The exact etymology of the term seems unclear.

I guess the reference here is to the oft quoted English phrase “a spot of tea”. Mind you, I’ve only ever heard that said in jest …

52. Alternative to a four-in-hand : ASCOT