Constructed by: Agnes Davidson & Zhouqin Burnikel
Edited by: Will Shortz 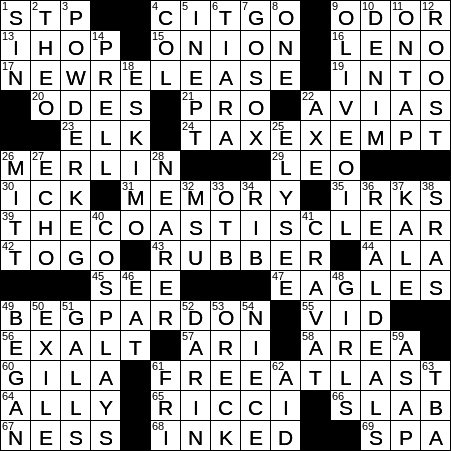 Themed answer are phrases in which the LAST word is a synonym of FREE:

The Quarter Pounder sandwich was created just down the road here, in a McDonald’s restaurant in Fremont, California. The franchise owner felt that there was a market for a hamburger with more meat in the bun, and so introduced a meat patty that weighed a quarter pound prior to cooking. He advertised the Quarter Pounder in his restaurant using the slogan, “Today Fremont, tomorrow the world”. Prophetic words …

The merlin is a small falcon that used to known as a pigeon hawk here in North America. Merlins were commonly used for falconry in medieval Europe. A “perlin” is a hybrid of a merlin and a peregrine falcon.

Togo is a country on the West African coast, one of the smallest nations on the continent. It is located between Ghana to the west, Benin to the east and Burkina Faso to the north.

YouTube is a video-sharing website, launched in 2005 by three ex-PayPal employees. Google bought YouTube in 2006 for $1.65 billion. Yep, $1.65 billion, less than two years after it was founded …

57. The Diamondbacks, on scoreboards : ARI

I remember listening to the full text of Dr. Martin Luther King, Jr’s “I have a dream …” speech not long after I moved to this country. I think I am man enough to admit that my eyes misted up as I listened to the words. I also recall thinking how lucky I was to have been invited to live in this great country, which was facing up to some of the sins of its past.

The Boston Red Sox is one of the most successful Major League Baseball teams and so commands a large attendance, but only when on the road. The relatively small capacity of Boston’s Fenway Park, the team’s home since 1912, has dictated that every game the Red Sox has played there has been a sell-out since May of 2003.

A cruet is a small glass bottle that holds a condiment or perhaps a dressing. The word “cruet” comes from the Old French word for an earthen pot.

Prell shampoo was introduced by Procter & Gamble in 1947. Back then it was a clear green concentrate sold in a tube (like toothpaste).

An Eskimo Pie is a chocolate-covered ice cream bar. The (delicious) dessert item was created in 1920, and first sold under the name “I-Scream Bar”.

The island of Saint Helena in the South Atlantic is one of the most remote islands in the world. It was discovered by Galician explorer João da Nova, who was sailing under the Portuguese flag. He name the island after Helena of Constantinople, mother of Roman Emperor Constantine the Great. Famously, the British opted to exile Napoleon on Saint Helena soon after his defeat at the Battle of Waterloo in 1815. The former French emperor died on the island in 1821.

The singer Bobby Darin had a short but eventful life. Darin started in show business as a songwriter for Connie Francis. He then made it big as a performer with huge hits like “Splish Splash”, “Dream Lover”, “Mack the Knife” and “Beyond the Sea”. He was active politically as a supporter of Robert Kennedy, and was present in the Ambassador Hotel in Los Angeles when Kennedy was assassinated. Soon after, Darin found out that the people he thought were his parents, were in fact his grandparents. The woman he knew as his older sister was in fact his mother. Darin died following a heart operation at only 37 years old.
“Die Moritat von Mackie Messer” is the original name of the song “Mack the Knife”, which comes from “The Threepenny Opera”. “The Threepenny Opera” (“Die Dreigroschenoper”) is a musical written by Bertolt Brecht and Kurt Weill that first performed in Berlin in 1928, an adaptation of “The Beggar’s Opera” written by Englishman John Gay in the 18th century. “Mack the Knife” was introduced into the popular music repertoire by Louis Armstrong. He had a hit with it in 1956, but it was the Bobby Darin recording of 1959 that came to be known as the definitive, English-language version of the song. I love it …

63. Letters on an unfinished sched. : TBA