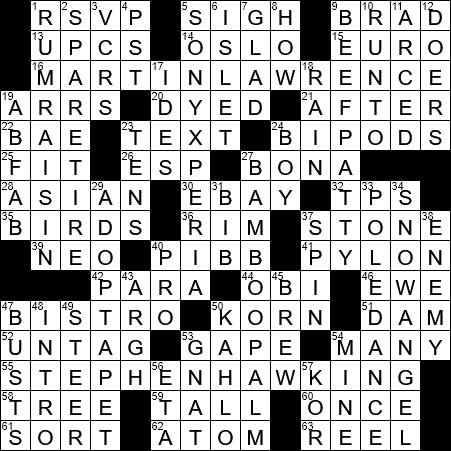 Today’s Wiki-est, Amazonian Googlies
Across
1. Say “Yeah, I can make it,” say : RSVP
RSVP stands for “répondez s’il vous plaît”, which is French for “please, answer”.

9. Pitt of “The Big Short” : BRAD
Brad Pitt’s first major role was the cowboy hitchhiker in the 1991’s “Thelma and Louise”. Pitt’s life offscreen garners as much attention as his work onscreen, it seems. The tabloids revel in the series of high-profile relationships in which he has been involved. He was engaged to Gwyneth Paltrow for a while, married to Jennifer Aniston and then to Angelina Jolie.

“The Big Short: Inside the Doomsday Machine” is a nonfiction book by Michael Lewis that examines the run-up to the 2007-2010 global financial crisis. In particular Lewis looks at the credit bubble of the 2000s. Lewis wrote another great book called “Moneyball” that told the story of Billy Beane and how he traded his way to success managing the Oakland Athletics baseball team. Brad Pitt appeared in the movie version of both of Lewis’ books.

15. Mark’s replacement : EURO
One of the currencies replaced by the euro was Germany’s Deutsche Mark (known as the “Deutschmark” in English).

21. Last word of a fairy tale : AFTER
(60A. First word of a fairy tale : ONCE)
The stock phrase “Once upon a time” has been used in various forms as the start of a narrative at least since 1380. The stock phrase at the end of stories such as folktales is often “and they all lived happily ever after”. The earlier version of this ending was “happily until their deaths”.

22. Hon, modern-style : BAE
“Bae” is a contemporary term of endearment, a pet name that is an abbreviation of “babe, baby”.

26. Madrid’s country, on Olympic scoreboards : ESP
Spain is the second largest country in the European Union (after France). “Spain” is an anglicized form of the Spanish name “España”, which comes from the Roman name for the Iberian Peninsula “Hispania”.

27. ___ fides : BONA
“Bona fide(s)” translates from the Latin as “in good faith”, and is used to indicate honest intentions. It can also mean that something is authentic, like a piece of art that is represented in good faith as being genuine.

The Hang Seng Index (HSI) is the most important stock market index reported from Hong Kong. The index was started in 1969 by one of the largest banks in Hong Kong, the Hang Seng Bank.

30. It uses clicks in lieu of paddles : EBAY
eBay was founded in 1995 as AuctionWeb as part of a computer programmer’s personal website. One of the first items purchased was a broken laser pointer, for $14.83. The buyer collected broken laser pointers …

32. Decorates with some rolls, for short : TPS
TP’ing (toilet papering) is a prank involving the covering of some object or location with rolls and rolls of toilet paper. If you live in Texas or Minnesota, that little “prank” is legal, but if you live here in California it is classed as mischief or vandalism.

40. ___ Xtra (soda) : PIBB
The soft drink on the market today called Pibb Xtra used to be known as Mr Pibb, and before that was called Peppo. Peppo was introduced in 1972 as a direct competitor to Dr Pepper.

41. Traffic cone : PYLON
“Pylon” can be used as another word for a traffic cone.

44. “Help me, ___-Wan Kenobi. You’re my only hope” : OBI
Obi-Wan Kenobi is one of the more beloved of the “Star Wars” characters. Kenobi was portrayed by two fabulous actors in the series of films. As a young man he is played by Scottish actor Ewan McGregor, and as an older man he is played by Alec Guinness.

46. Source of Manchego cheese : EWE
Manchego is a cheese made from sheep’s milk made in the famous La Mancha region of Spain. The term “Manchego” is used to describe things related to La Mancha.

47. Cafe : BISTRO
“Bistro” was originally a Parisian slang term for a “little wine shop or restaurant”.

50. Band whose name sounds like a vegetable : KORN
Korn is an alternative metal band from Bakersfield, California. The band’s name is derived from a fan suggestion of “Corn”. The suggested name was considered too bland and so was prettied up to Korn, with the letter “r” capitalized and written backwards.

55. Physicist who won a 2009 Presidential Medal of Freedom : STEPHEN HAWKING (hiding “hen” and “hawk”)
Stephen Hawking is a theoretical physicist from Oxford, England. Hawking owes much of his fame in the world of popular science to his incredibly successful book called “A Brief History of Time”. “A Brief History of Time” has sold over 10 million copies and was on London’s “Sunday Times” bestseller list for over four years. Hawking does a wonderful job of explaining many aspects of cosmology without losing the average reader. There is only one equation in the whole book, and that equation is “E = mc2”. Hawking’s life story is recounted in the excellent 2014 film “The Theory of Everything”.

Down
3. Betamaxes, e.g. : VCRS
The video standard known as VHS is more fully referred to as the Video Home System. VHS was one of many standards touted by various manufacturers in the seventies. The biggest rival to VHS was Betamax, but we all knew which of the two standards won the final round in that fight.

5. Line of Japanese smartphones : SONY XPERIA (hiding “onyx”)
The Xperia is a line of smartphones that Sony has been making since 2008. The company introduced Xperia tablets in 2012. The name “Xperia” is formed from the English word “experience”.

9. Part of a Whopper : BEEF PATTY
If you were in Japan at the end of 2009 and went to Burger King, you might have ordered a Windows 7 Whopper, a promotion for the Windows 7 Operating System. The sandwich was 5 inches in height, and contained seven beef patties!

11. Like a rainbow : ARCED
Sunlight shining through airborne water droplets can produce rainbows. The water droplets act as little prisms, dispersing the white light into its constituent colors. Sometimes we see double rainbows. If we look carefully, we can see that the order of the colors in the first and second arcs is reversed.

19. Classic Britcom : AB FAB
“Absolutely Fabulous” (sometimes shortened to “Ab Fab”) is a cult-classic sitcom produced by the BBC. The two stars of the show are Jennifer Saunders (Edina Monsoon) and Joanna Lumley (Patsy Stone). “Absolutely Fabulous: The Movie” hit the screens in 2016. I haven’t seen it yet, but my wife did and really enjoyed it. She said that there’s a veritable cavalcade of British stars that make an appearance …

29. Animal lovers’ program : ADOPT-A-PET
Adopt-a-Pet.com is a non-profit website that maintains a website of adoptable pets from over 12,000 pet shelters across North America.

31. Chest protector : BIB
The word “bib” comes from the Latin “bibere” meaning “to drink”, as does our word “imbibe”. So, maybe it’s less about spilling the food, and more about soaking up the booze …

49. Have the tiller : STEER
A rudder is usually a flat sheet of wood or metal located at the stern of a boat, under the waterline. The rudder is attached to a rudder post, which rotates to change the orientation of the rudder hence steering the boat. That rotation of the rudder post can be achieved by pulling or pushing a lever at the top of the post called a tiller.

50. “The Two Fridas” artist : KAHLO
Diego Rivera was a Mexican painter, famous for his murals. His wife was the equally famous Mexican artist Frida Kahlo.

53. Little annoyance : GNAT
Gnats are attracted to the smell of rotting food, and to vinegar. Simple homemade traps that use vinegar are often constructed to attract and kill gnats.

56. Second letter before iota : ETA
Eta is the seventh letter of the Greek alphabet, and is a forerunner of our Latin character “H”. Originally denoting a consonant, eta was used as a long vowel in Ancient Greek.

57. Two-nation peninsula: Abbr. : KOR
Korea was occupied by the Japanese military from 1910 until Japan surrendered at the end of WWII in 1945. While the UN was working towards a trusteeship administration for Korea, the Soviet Union managed the Korean Peninsula north of the 38th parallel and the US managed the south. The UN’s plans came to naught as the Cold War dictated the establishment of the two separate states of North Korea and South Korea. North Korea invaded the South in 1950, leading to the Korean War. After three years of fighting, the border between the two states became the demarcation line between the two military forces on the day the Armistice Agreement was signed. That line runs diagonally across the 38th parallel, and is better known as the Korean Demilitarized Zone (DMZ).